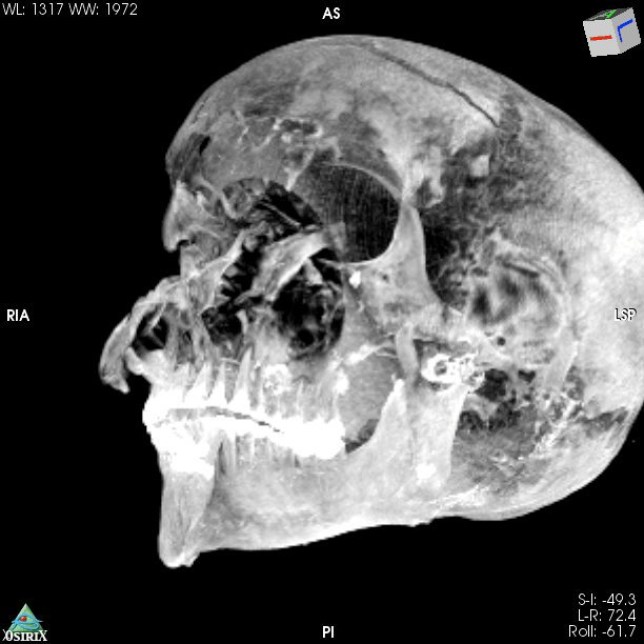 A pharaoh who ruled Egypt more than 3,500 years ago was taken prisoner in battle – and then ‘ceremonially executed’, according to new research.

The mystery of five terrible wounds to his head has finally been solved – 140 years after the discovery of his mummified body.

Scans reveal in graphic detail the last moments of Seqenenre-Taa-II ‘The Brave’ – and that his sobriquet is richly deserved.

He was put to death by brutal enemy invaders from the north – with his hands bound behind his back.

His face was horribly mutilated with axes, spears and daggers – to ‘disgrace him.’

Corresponding author Professor Sahar Saleem, of Cairo University, said: ‘This suggests Seqenenre was really on the front-line with his soldiers risking his life to liberate Egypt.’

It makes him the only pharaoh known to have taken part in armed combat.

Prof Saleem added: ‘Most likely the King was captured, his hands were tied, and he was forced to kneel.’ 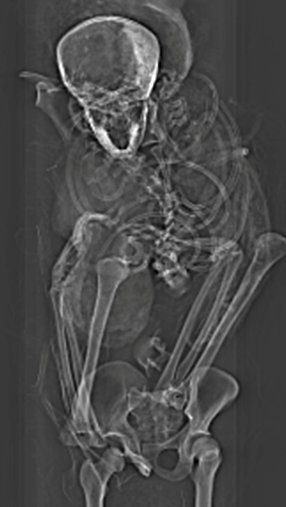 His injuries included a long horizontal cut across the top of his forehead, a smaller one just above the right eyebrow and another below the left eye.

The centre of his face had been smashed in with a blunt instrument – destroying the right eye socket. There was also an incision below the left ear from a sharp knife.

It was a frenzied attack by a number of men wielding a variety of weapons. State-of-the-art imaging also showed embalmers skilfully concealed other wounds on the right side of his skull.

The investigative technique – a form of CT (computed tomography) known as palaeoradiology – tells a more nuanced story of his fate.

It sheds fresh light on an event that indirectly led to the reunification of Egypt in the 16th Century BC.

Pharaoh Seqenenre-Taa-II ruled Southern Egypt between 1558 and 1553 BC during the invasion by the Hyksos.

This was a foreign dynasty with Asian roots that occupied Egypt for a century – from 1650 to 1550 BC.

Seqenenre was attempting to oust them. Scholars have debated his killing ever since the mummy was unearthed in 1881.

Immediate and subsequent examinations – including an X-ray analysis in the 1960s – found the dead king identified severe head injuries but no other wounds to his body.

Some experts believe he was murdered in his sleep by palace conspirators.

The latest evidence published in Frontiers in Medicine backs the idea he was captured on the battlefield – and executed afterwards.

But it puts forward a novel interpretation of the events based on the computer-processed X-ray images.

Seqenenre’s hands had been tied – preventing him from defending himself.

And the execution was carried out by multiple attackers – perhaps including the Hyksos king himself.

Analysis of five different Hyksos weapons matched Seqenenre’s wounds, They are housed at the Egyptian Museum, Cairo – along with the mummy.

She explained: ‘In a normal execution on a bound prisoner, it could be assumed only one assailant strikes, possibly from different angles but not with different weapons.

‘Seqenenre’s death was rather a ceremonial execution.’ 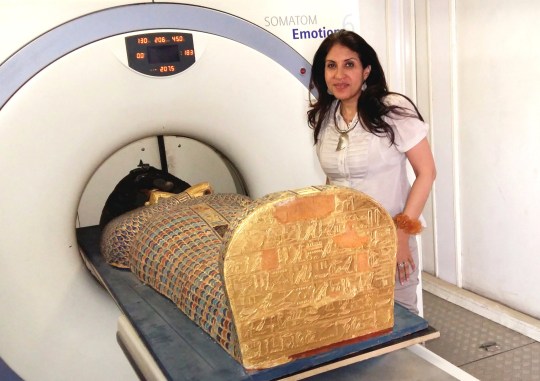 The investigative method can help determine age at death, sex – and even how the person died.

Seqenenre was about 40 when he died based on the detailed morphology revealed in the images – providing the most precise estimate to date.

‘The lethal attack was aimed at the king’s face, likely in an attempt to disgrace him.’

His brain was not removed and had shifted to the left side of the skull – suggesting the body stayed on its left side for some time.

Prof Saleem and co-author Dr Zahi Hawass, former Egyptian minister of antiquities, have pioneered the use of CT scans on the New Kingdom pharaohs.

They include well-known names such Tutankhamun, Ramesses III, Rameses II and Hatshepsut.

Seqenenre appears to be the only one among this illustrious group to have been on the frontline of the battlefield.

The study also revealed important details about the mummification of his body. A sophisticated method hid the king’s wounds under a layer of embalming material.

It functioned similarly to the fillers used in modern plastic surgery. This would imply mummification took place in a real laboratory rather.

The poor condition of the mummy previously suggested it had been done hastily – away from the royal workshop.

Who was Seqenenre-Taa-II ‘The Brave’? 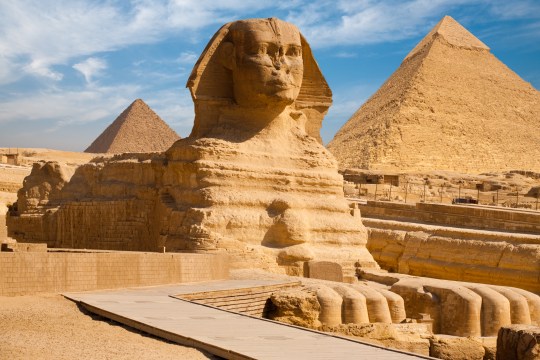 She explained: ‘It ‘rewrites’ an important chapter in the history of Ancient Egypt.

‘We know Seqenenre-Taa-II, The Brave, ruled during the occupation of the Hyksos, and he prepared for the expulsion of Egypt’s enemies.

‘He founded a military settlement at Deir el Ballas, north of Thebes, to be the base for campaigns against the Hyksos.

‘But the history did not mention if the Seqenenre actually fought against Hyksos or not – or his fate.

‘So it was important to give credit to Seqenere for being on the front line in a fight to liberate Egypt.”

Prof Saleem added: ‘Seqenenre’s death was not wasted. It motivated his sons to complete what he started and unify Egypt and start the New Kingdom.’

The Hyksos were believed to be from northern Canaan. They established the heart of their kingdom at Avaris – today known as Tell el-Daba.

Recent discoveries suggest they cut off the right hands of deceased enemies – to deprive them of their strength in the afterlife.