14,000 mummies to march in protest over the UK’s childcare ‘mess’

Thousands will soon take to the streets in protest over the UK’s ‘unaffordable’ and ‘dysfunctional’ childcare sector.

A Halloween-themed march on October 29 will see protests held across the country.

Campaigners are calling for an urgent intervention from the Government for the ‘shocking’ treatment of mothers and families.

The protest, led by Pregnant Then Screwed, will bring mums together for a ‘united call to arms’ to demand change.

Joeli Brearley, founder and CEO of Pregnant Then Screwed, said: ‘Mothers from all over the UK have come together because enough is enough.

‘We want urgent progress on women’s rights. It’s the 21st Century, yet 54,000 mothers are being pushed out of the workforce every year for simply daring to procreate. 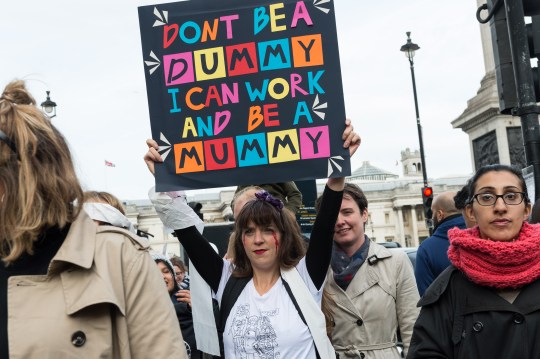 A similar march was held in London in 2017 (Picture: Wiktor Szymanowicz/Getty Images)

‘The childcare sector is in a mess; thousands of nurseries have collapsed this year alone.

‘We have had enough.’

The national protest is demanding reform on three key issues that are pushing mothers out of the workforce and into poverty.

Campaigners want increased funding for the childcare sector to enable affordable, high quality childcare for all children, ring-fenced and properly paid maternity and paternity leave and fir all jobs to be flexible by default. 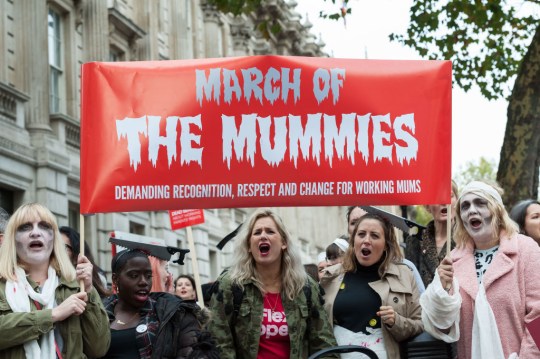 Politicians are also expected to attend, such as MPs Stella Creasy and Munira Wilson.

Pregnant Then Screwed say their data reveals the harsh reality that mother’s are currently facing: such as extortionate childcare costs, pitiful financial support for new mothers and fathers, and a lack of good quality part time and flexible work.

A recent survey by the group revealed that 31% of new parents will not be able to afford to have any more children, and 48% of pregnant mothers will have to cut their maternity leave short due to financial hardship. 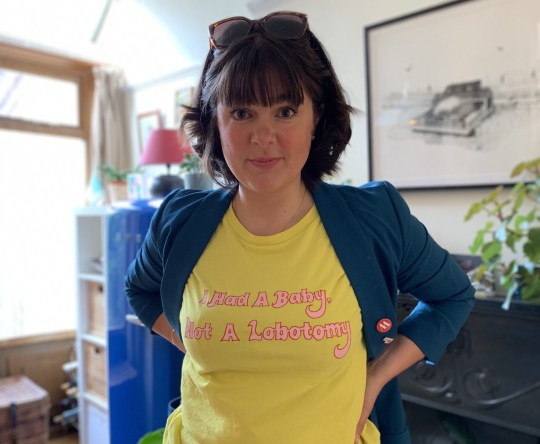 Joeli Brearley says women are ‘falling out of the workforce in droves’ (Picture: Pregnant Then Screwed)

The group found that 60.5% of mothers who had an abortion in the last five years stated that childcare costs were a factor in their decision to terminate a wanted pregnancy.

Meanwhile, 43% of mothers said they were considering leaving their job as a direct result of childcare costs.

Around 14,000 people are expected to march this weekend.

Ms Brearley added: ‘We’ve got women terminating pregnancies, thousands more deciding not to have children, or not to have more children. Women falling out of the workforce in droves; and children being pushed into poverty – What for?

‘If you want us to work so that we can financially contribute to both our family and the economy, then give us the social infrastructure to be able to do just that.

‘Women’s economic empowerment hinges on a system that works for us, and the government needs to start taking this, us, seriously.

‘We are calling for an end to the shambolic support system that is failing mothers and families everywhere. We want to see change now.’