A HUNDRED firefighters and 15 engines were tackling a blaze in a high rise hotel and flats development beside the Thames early today.

Fifteen fire engines were sent to a blaze at a hotel in BatterseaCredit: Twitter/LondonFire 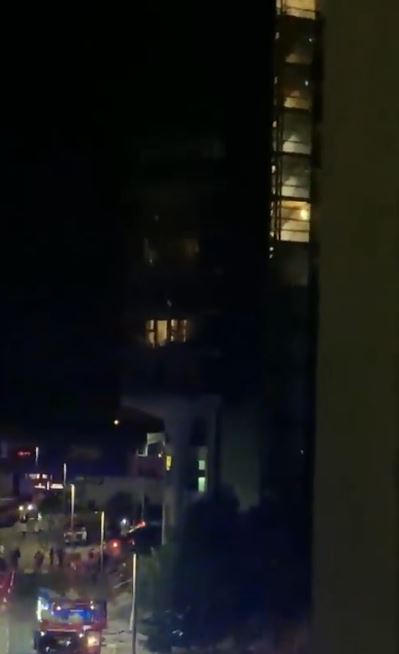 Hundreds of people could be seen on the pavement outside after apparently being evacuated.

The London Fire Brigade initially said a second-floor flat caught fire around 11.20pm. It later clarified the fire started in a hotel room.

Seventy firefighters were joined by 30 more amid fears the blaze could spread up the building.

“Eyewitnesses say there was smoke up to the second floor.”

He said the fire broke out at the Falcon Wharf development, which houses the luxury Hotel Rafayel as well as private apartments.

London Fire Brigade said early today: “Fifteen fire engines and around 100 firefighters were called to a fire at a mixed-use commercial and residential building on Lombard Road in Battersea.

“Most of a hotel room on the second floor was damaged by fire and smoke logging affected the upper floors of the building.

“Firefighters will remain at the scene throughout the night damping down.

“The cause of the fire is under investigation.”