Just evacuated my apartment after the earthquake. Whole apartment block moved. I was in the Newcastle earthquake back in 89 too. Have left with my cat and my phone.

A lot of apartment dwellers in Melbourne have said they thought their building was collapsing this morning.

It was at least a way to meet the neighbours.

Well this earthquake was nice excuse for a car park catch-up with ALL my neighbours in the apartment block. What a neat way to break up the monotony of lockdown… ?

i love my apartment complex lol. magnitude 6 earthquake, lasts for 20 seconds. when it’s over everyone goes to stand on their balconies, which face in to the centre of a U-shape, to discuss, like so many elderly italian women

God DAMN! First earthquake I’ve experienced in years, and of course it’s when I live in a 3 story apartment! #Melbourne (also excuse the messy apartment) pic.twitter.com/Hwd51ROOFY

Despite the shock of experiencing the worst earthquake to hit Melbourne in almost 200 years, protests are still taking place in the city today. You can follow that news with my colleague Matilda Boseley here.

‘Probably the largest earthquake’ around Melbourne in 200 years, says expert

Dr Januka Attanayake, the research lead with the University of Melbourne’s Earthquake Seismology Earth Sciences unit, said preliminary estimates had the earthquake as a magnitude 5.8 to 6.0.

“If these preliminary estimates are correct, it is probably the largest earthquake we have felt around Melbourne in the last 175 to 200 years,” Attanayake said. “If it’s a magnitude 6.0, it’s the first in hundreds of years. This is the first earthquake of this magnitude I have seen here during my lifetime, and it has probably not been seen during the lifetime of several generations.”

“We record about 400 earthquakes less than magnitude 2.5 every year,” he said. “So earthquakes are not an exception.”

Usually, Attanayake and his team would put out more seismometers in the aftermath to try and detect aftershocks, which can last for months, but due to Covid-19 travel and work restrictions this was not possible, he said. Two significant aftershocks of 2.5 and 3.0 have already been detected by existing seismometers.

“It’s important work because if we can detect aftershocks we can detect the fault area that ruptured,” he said. “We need to know this information for proper future hazard analysis. It helps us detect expected ground motions of earthquakes going forward. This is essential information for engineers building city structures in future, as we can for example say how much ground motion can be expected at a given location over the next 50 years.” 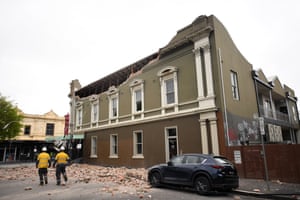 Emergency services on scene after Betty’s Burgers on Chappel Street in Windsor was damaged following an earthquake Photograph: James Ross/EPA

Reporter Donna Lu is outside Betty’s Burgers on Chapel Street in the Melbourne suburb of Windsor, where the top half of the wall from the second story fell down during the quake.

She spoke to local resident Josh Sinclair, who described the sound of the brickwork coming down like “a train going past”.

“When we came out there was smoke everywhere,” he said.

His house is still without power.

Mansfield Hotel manager Guy Haston fears there will be aftershocks later on in the day.

“Considering I originally come from Christchurch I’m quite used to earthquakes, and it was quite severe,” he said.

“I didn’t get the noise you normally associate with earthquakes but the rocking and rolling was quite severe, it lasted a good 20 seconds or so.”

Haston was in Christchurch for a 5.7 earthquake that he described as a “totally different feeling”.

“In Christchurch it was moving in one direction and then stopped and moved in a different direction, at that stage you thought it’s either going to get worse or stop, and luckily it did.”

Haston was at home when the earthquake struck Mansfield, and drove into town to start his shift early for fear of damage in the shop.

“I can’t see any visible damage, I thought there’s going to be stock down, but I walked in and one bottle fell off the rack and it didn’t even break,” he laughed.

“I thought I’d have a mess to clean up with the severity.”

Let’s go back from New York to Mansfield, near the epicentre of the earthquake.

The Witches Brew Cafe owner Rebecca Douglas was serving customers inside her Mansfield store when the earthquake struck.

“Nothing broke, thank goodness, but it was quite concerning. I said perhaps we should move outside just in case, and by that time it was already over.”

Douglas said the tremor, in total, lasted about 15 seconds.

“It started slow, built up and everyone was nervous. We heard this rumble, rumble like a big truck coming through the building,” she said.

“Since then, customers are here and getting lots of phone calls from concerned family and friends everywhere, I’m too busy making coffees but I have plenty of text messages as well.”

Douglas didn’t know if there’d been damage in the area, but believed the tremor was felt “right down to Cann River”, about seven hours south-east of Mansfield.

Morrison was asked how he felt to be out of the country while Australia experienced ‘the largest earthquake it has ever felt’.

(A footnote on that: there was a magnitude 6.1 earthquake reported in the Petermann Ranges region of the Northern Territory, about 125km southwest of Uluru, on 21 May 2016, and a magnitude 6.2 recorded offshore in Collier Bay in Western Australia in 1997.)

Morrison said him being out of the country was “unavoidable”.


This is not predictable. I’m concerned to know the facts and pleased that reports so far that I’ve received are not of serious injuries and things of that nature. That’s very welcome news.

But, of course, these are early reports and I remain concerned and I’ve asked the Deputy Prime Minister and the minister to keep me informed of developments.

Emergency Management Australia are liaising with state authorities. These are very professional people. Regardless of whether it’s a flood, bushfire ,earthquake or cyclone, we have some of the best disaster response agencies anywhere in the world if not the best. And I know that those who may be in distress tonight — during the day there in Melbourne and across Victoria today will be well looked after and well attended to in terms of any needs that they have.

Scott Morrison has just addressed travelling reporters in Washington about the earthquake.

He says the reports he’s seen to date don’t point to “serious injuries or things of that nature” and that is “very welcome news”.

He said Emergency Management Australia is liaising with state authorities, and the acting prime minister Barnaby Joyce is keeping him informed.

The federal government is ready to “to provide whatever assistance is needed, whether from the ADF or others”.

He said anyone in distress in Melbourne or beyond will be “well looked after”.

Morrison also said he’s been in contact with the Victorian premier, Daniel Andrews.

Earthquake felt like a ‘loud crash’ in Mansfield, locals say

Mansfield Rudolf Steiner School and Kindergarten administrator Maisie Pilli was standing with her co-worker when she heard a “loud crash”.

“To me it sounded like a truck was going to crash into the building, and it wasn’t until me and my co-worker looked at each other and thought it was an earthquake that we ran to a doorway and stood there together,” she said.

Pilli felt the tremor for about 30 to 45 seconds, and was relieved the kindergarteners were off on school holidays.

“Everything was fairly sturdy, we didn’t see any damage, but we had a look around afterwards and nothing went too far off the shelves, the only thing we saw outside was a few water-tanks shaking,” she said.

Pilli said all Mansfield community noticeboards were “going off the charts”, with most people having had a similar experience.

“One of my friends with horses says all the horses went crazy and weren’t enjoying it,” she laughed.

“My poor dog’s at home and I know she’ll be thinking ‘what’s going on’?

“We really weren’t prepared for it being in our location, I think we’d jump under desks instead of a doorway next time.” 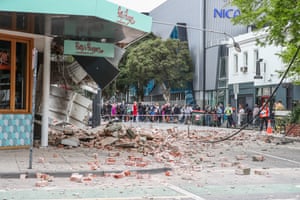