Doug Reidy was a supervisor at Rio Tinto, on a good salary, splitting his time between Western Australia and his property at Murrindal, deep in a valley within Victoria’s east Gippsland region.

But when the black summer bushfires came in the 2019-20 fire season, they took almost everything. “I managed to survive,” says Reidy, 49. “But it was like something died inside you.”

He was left traumatised and with a lasting shoulder injury after a wind gust lifted him metres into the air and threw him across a paddock. He sheltered under the tyre of a tractor with a wallaby, watching as his third-generation family home was destroyed.

At the property next door, his neighbour perished.

“That was the fire. The real struggle has been since,” says Reidy. “The red tape. All the bullshit you’ve got to try and go through.”

Reidy lives with post-traumatic stress disorder and anxiety, leaving him unable to work. When he applied for the disability support pension, his application was rejected because he couldn’t meet a key requirement: that his condition was fully diagnosed, fully treated and fully stabilised.

Now he is relying on the charities such as the Salvation Army and the Red Cross.

Victoria Legal Aid says Reidy’s case is one of many that reveals flaws in the system.

“Through our work with hundreds of clients over the past decade, we have seen how the [disability support pension] is failing too many of the people it is meant to support,” says Alina Leikin, the managing lawyer of Victoria Legal Aid’s economic and social rights program.

Advocates hope a Senate inquiry into the scheme might herald change.

In 2011, in response to spiralling costs, the Gillard Labor government dramatically tightened access to the disability support pension.

It introduced tough “impairment tables” which are used by Centrelink to quantify a person’s disability or illness, and the “program of support”.

The latter is a requirement that people who have multiple moderate ailments rather than one severe condition must spend 18 months looking for work with an employment service provider agency before their claim can be approved.

Victoria Legal Aid says these changes, and others made by the Abbott government, have been so significant that “they resulted in an extraordinary reduction in the rate of successful grants, far exceeding even the stated objectives underpinning the changes”.

By the time the Abbott government introduced government-contracted doctor’s assessments in 2015 the grant rate had dropped to 32%.

In April, Reidy applied for the disability support pension with the help of Anglicare.

He was not surprised to be rejected: “Everybody told me it was like trying to walk through a minefield to get it.”

“When I first started seeing my GP, he gave me a sheet for potential psychologists,” Reidy says. “I rang every one of those and could not get in anywhere.”

It took 37 referrals and 17 months to get an appointment with a psychologist in Bairnsdale.

The application process is complicated and arduous for an ultimately modest payment of $952.70 a fortnight for a single person, about $200 below the Henderson poverty line.

To qualify, Centrelink must judge that the applicant is unable to work more than 15 hours a week in any job. It must be proven their condition will last more than two years, and the applicant must hit an impairment rating of 20 points (of a possible 30) for a single condition.

If the applicant hits 20 points across several conditions, they must first complete the “program of support” – the 18 months of job search with an employment service provider.

Perversely, some people are too unwell to meet this, and so they remain stuck in limbo.

Those ineligible for the disability support pension are placed on the sub-poverty-line jobseeker payment – $620.80 a fortnight – and in most cases must look for work to maintain the benefits.

Reidy says he can’t get the jobseeker payment because of a payout he received when he stopped working. He used that – with an insurance payout and Red Cross grants – to clear the remaining mortgage on the Murrindal property.

He no longer has access to that leave pay, but has been told he is still required to serve a Centrelink waiting period to access jobseeker.

“Until the 30th of September, I am still suspended from jobseeker and basically living off charities,” he says. “When I explained to them that I used that money to go towards paying out my mortgage, they don’t care about that. It’s solely just an income.”

Only a few years ago, Reidy’s life was very different. As a mining supervisor he had people working under him at Rio Tinto. His job was “very demanding”, but he handled it well.

Now it’s a “battle to even write an email”.

Reidy struggles to be out in public, particularly around large crowds (“I go to water,” he says), is easily frustrated, struggles to concentrate, and his short-term memory is “very sketchy”.

Sometimes his anxiety has been so bad that he’s passed out. There are other, more specific things: “I can’t stand being in the wind any more. I can’t handle loud noises.” 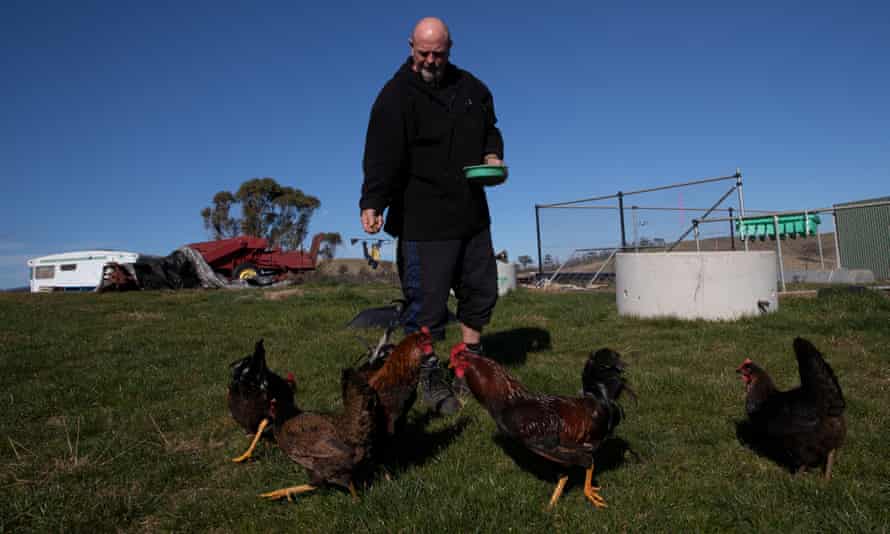 Doug Reidy at his property in Murrindal, east Gippsland. He can no longer work but cannot get the disability support pension. Photograph: Rachel Mounsey/The Guardian

Reidy remembers seeing the first spotfire on his neighbour’s property that day.

He thought he was on top of it, until he knew that he wasn’t: “You hear that roar coming, and you think: ‘What the hell is that?’ If you’ve ever been in an international airport before, with all the jets going off, it’s nothing compared to the roar that came over that hill.”

‘You always have to prove yourself’

Reidy is being assisted to appeal Centrelink’s decision. Guardian Australia has reported cases where an appeal takes years as people gather additional medical evidence and, in some instances, their condition deteriorates.

In its submission to the Senate inquiry, Victoria Legal Aid calls for the end of the program of support, an overhaul of the impairment tables, and more support for Aboriginal and Torres Strait Islander navigating the scheme.

The government says support is available to help vulnerable and Indigenous people through the process. But it insists the eligibility criteria reflect that the payment “is a significant and long-term taxpayer-funded support”.

“Prior to receiving a lifelong pension, an individual must be fully diagnosed and seek reasonable treatment where there is a possibility it may improve their functional impairment,” the social services department said.

“Requiring people to undertake a [program of support] helps to build their work capacity and gives them the best opportunity to participate in employment before granting them [disability support pension], which is a serious, long-term payment.”

Asked about Reidy’s claim, a Services Australia spokesman Hank Jongen says “we appreciate this is an extremely difficult situation for Mr Reidy”.

“While we can’t discuss individual cases, we are in contact with Mr Reidy to ensure he receives all possible support and understands his options,” he says.

“We recognise medical conditions can have a significant impact on people’s lives, however, we do not have any discretion to grant payments outside the criteria set down in legislation.”

After the roar of the fire came over the hill, Reidy was confronted by a wall of flames. Trouble struck as he was battling to put out the shed behind his house.

“I had a two-inch firefighting hose in my hand and the wind just picked me and threw me across the ground, probably four to five metres off the ground, until I hit the ground on my right shoulder,” he says.

He managed to grab the hose, which was making a “snake action, just flipping around”, and crawl under his tractor. A wallaby joined him.

“We made eye contact,” says Reidy. “It was like he knew. Normally they’d run away but he knew it was probably the best option.”

Reidy thinks it was the large ploughed area behind his house that saved him. Around him there was devastation, including dead cattle and other animals.

“Unfortunately a couple of days later I found that same wallaby,” Reidy says. “I don’t know if he died of shock or what he died of. He didn’t make it either.”

Reidy now lives in a modular home that will be provided by the state’s bushfire recovery program for three years. His support dog, Max, has “made a huge difference”.

Having worked his whole life, he’s frustrated the Centrelink system is unable to support him now he needs help.

“One of the biggest things with this mental health condition is you always have to prove yourself,” Reidy says.

In that sense, access to the disability support pension is just one of the threads of a new life that Reidy is trying to stitch together.

“It would give you a little bit of peace of mind that you actually had some form of an income,” he says. “Some sort of security.”

Diplomacy dialled up to 11: Australia saddles up with US as Indo-Pacific heads for cold war | Katharine Murphy

In lockdown my new goal is giving up. But will I be able to achieve it? | Justine Toh