Stepping up when adults don’t: ‘It’s just so real for us right now’ | Australian politics

It was a busy start to last week for Anjali Sharma. The year 11 student, who is studying two extra year 12 subjects, found that all her teachers had assigned work or set tests for the same time.

It would have been a difficult enough juggle for any 17-year-old. But Sharma has more to juggle than most, and as she was taking a walk between maths and global politics exams last Thursday, another sphere of her life intruded when she checked her phone for the time.

“I saw a text message to say she’d approved the mine,” she says. “It was completely out of the blue.”

The mine in question is Whitehaven Coal’s extension to its Vickery coalmine in NSW and “she” is the federal environment minister Sussan Ley. Sharma was the lead litigant in a class action including seven other high school students, which argued the minister had a duty to avoid “future harm related to the carbon emissions that would result from the approval” of the Vickery extension. They wanted its development stopped.

Get the Guardian weekend app

In a world first Justice Mordecai Bromberg ruled the minister had a duty of care to avoid future harm to young people. But he did not grant the injunction to stop the expansion going ahead as he was not satisfied the minister would breach her duty of care. The federal government’s appeal of the decision is due to return to court next month, but on 16 September, Ley approved the extension.

It was a devastating development, even more so because Sharma hadn’t been expecting it.

“Australia hasn’t even set a net zero emissions reduction target, and so it’s a real case of what’s the point?” she says. “Me and the seven other litigants, we went to court in a completely novel legal battle and we won, and yet Sussan Ley approved the mine. Sometimes it feels like nothing is happening.”

Anjali Sharma is too young to vote, but has taken the federal government to court in a landmark climate change case. Photograph: Christopher Hopkins/The Guardian

Not very long ago, the concept of a group of teenagers calling the government to account in court would have seemed preposterous. Call it the Greta Thunberg effect – as Yale University did earlier this year – young activists around the world, many of them children, have been driven into the public sphere by their frustration over the inaction of governments, and by the feeling that they are being denied a stake in an issue which will shape their future.

In some cases, they have not only become the face of future consequences, but icons of resistance, taking great responsibility on their still-growing shoulders.

“Children and young people carry a heavy burden,” says Prof Lucas Walsh, director of the Monash Centre for Youth Policy and Education Practice. “We hold them up as figures of hope for the future, but they can’t influence that future without a lot of difficulty, without working incredibly hard.”

Sharma is engaging and articulate. It’s easy to imagine her achieving her ambition of becoming an environment lawyer, a goal which pre-dates her involvement in activism. She is upbeat and focused on the future, even when discussing climate impacts which could make everyone’s future less certain.

The Ley decision marked the start of the school holiday period, a frantic time of intense study, including language practice, with an Indonesian oral testin the first week of next term. At the same time, there is the appeal to prepare for, and the possibility of another challenge to the Vickery extension.

Children and young people carry a heavy burden. We hold them up as figures of hope for the future, but they can’t influence that futureProf Lucas Walsh

It is a pace and pressure Sharma has experienced before. She has learned how to manage the competing demands of school and activism – demands which have, at times, seen international media calling for comment. The exhausting and incessant demands on her time forced Sharma to reassess her constant connection to the world outside her home and classroom.

“I’d have my class taking up half the screen and I’d be watching a press conference, or I’d be updating the live blog every few seconds [at the same time],” she says. “With this case, when it’s been at its peak, my phone was constantly buzzing, notification after notification, and it’s so easy to get caught up in that. If I’m at dinner I can’t stop checking my phone, or if I’m in class I’ve suddenly missed 15 minutes of content and I’m three pages behind on the notes.”

She has had to train herself to switch off and has disabled notifications on her phone. “I definitely needed to put a divide between myself and everything that’s going on,” she says. “It’s been a very beneficial step to take – especially now coming up to a really busy exam period.”

Around the world, young people – amid their school exams and ordinary adolescent life – are becoming some of the most-recognisable faces of opposition to climate change. From Greta Thunberg at Davos to Sharma in the federal court, they are speaking to a society which often refuses to hand them any meaningful power, says Walsh. 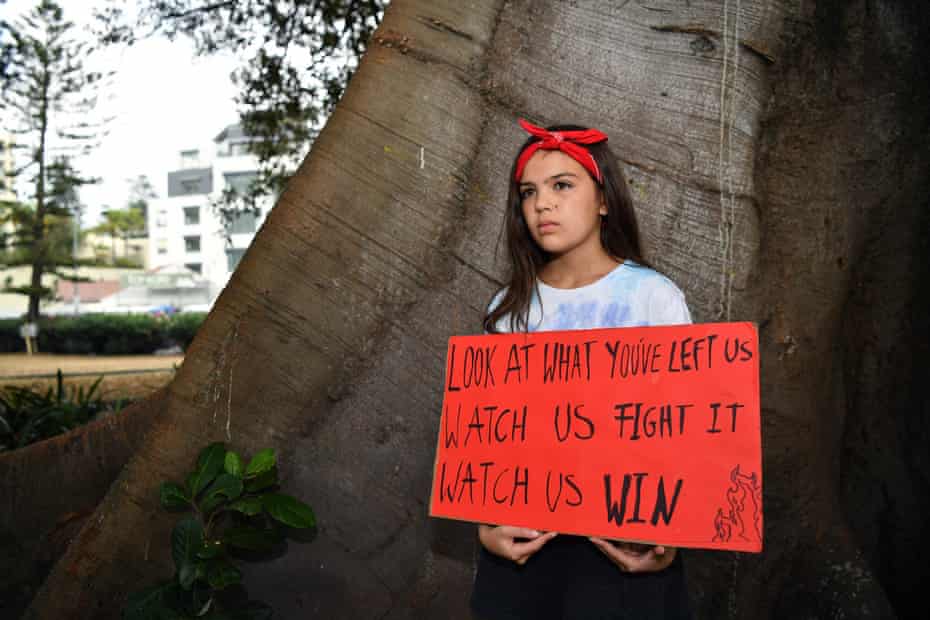 “There is a long history of encouraging putting leadership in the hands of young people, while at the same time keeping them in what people think is their place,” he says.

“The only opportunity is for them to raise their voices and have politicians listen, but the politicians then explicitly say, we’re not going to be told what to think by kids. So they’re forced into taking action,” says Dr Blanche Verlie, a sociologist and climate change educator at the University of Sydney.

Sharma has become one of the best known of Australia’s young activists, alongside those litigating with her such as Izzy Raj-Seppings, 14, and Bella Burgemeister, 15 (who wrote a book about climate change at age 10), and the student climate strike leaders.

But those who see a change-maker who has taken the climate fight to the door of government are also looking at a teenage girl who finds solace in music, sport and walks with her dog.

“Sometimes I feel like when people find my social media, they have an image of me as completely politically driven with the blinkers on, it’s not like that,” she says. “I have my hobbies, I have my passions, and I’m a person a lot more than I am an activist.”

She loves music – Lorde, Jack River, Cub Sport and Mallrat are favourites – and taught herself to play a guitar she saved up for.

Then there’s sport, especially soccer, cross-country and netball, which has given Sharma the opportunity to sink into the relief of anonymity and be just another teenager on a netball court.

When she joined a new netball team this year, none of her teammates knew about her activism. “At school everyone knows me as ‘that kid’, it’s completely different when I go to netball and be a normal teenage girl, because I am,” she says. 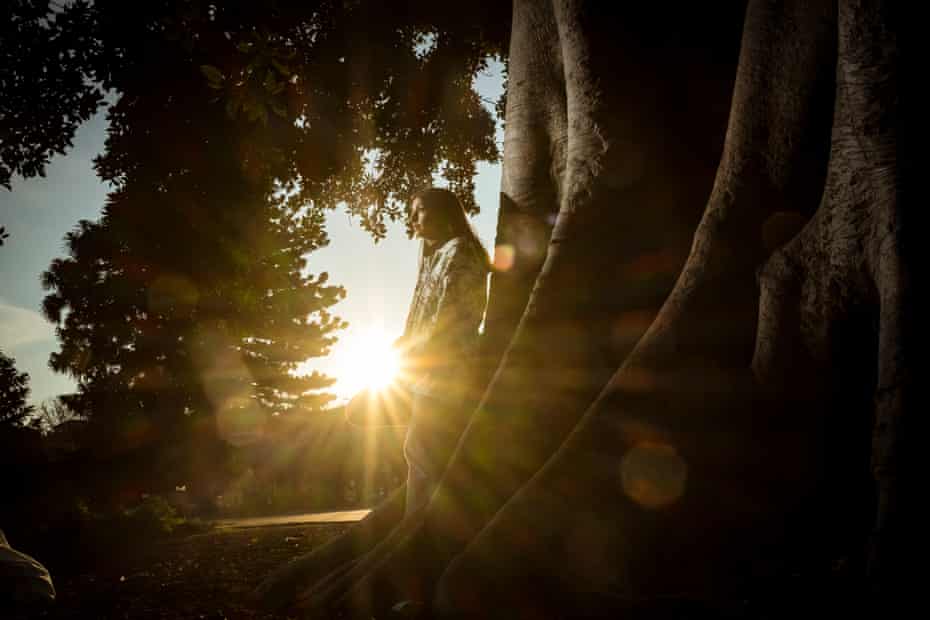 ‘There’s a lot of the anger, a lot of anxiety, and that’s what I think gets people involved in activism,’ says Anjali Sharma. Photograph: Christopher Hopkins/The Guardian

“Same with netball umpiring; running up and down the sidelines with the whistle in my mouth, I’m just as hated as every other netball umpire.”

But the fear which prompted her to become involved in School Strike 4 Climate, which led her into the federal court, is still there. She feels it personally, and it is generational, Sharma says.

“There’s a lot of the anger, a lot of anxiety, and that’s what I think gets people involved in activism.”

‘It takes a lot to fight’

Sharma is not alone in fearing climate change, says Verlie, who sees “really intense terror” in her graduate students.

“There is fear and feelings of disempowerment, extreme frustration, overwhelming feelings that no matter what they do, it won’t be enough. This is such a pervasive phenomenon that it affects young people’s whole sense of identity, their interpersonal relationships, their ability to imagine who they are and can be, it’s a comprehensive distress,” she says.

“It’s a profound sociological change in how young people understand what it is to be a person in the world, and the relationships that they can have and want to have.”

Meanwhile, another study, co-authored by Walsh, found many young people, even those with high levels of civic engagement, believe their influence is limited to the local level.

Adults are not doing enough. People like Anj step up when adults don’t.David Barnden, lawyer

David Barnden, who led the federal court case for Equity Generation Lawyers, says taking action can come at a cost for young people like Sharma.

“Adults are not doing enough. People like Anj step up when adults don’t,” he says. “There’s a fair bit of tension in all of this. These young people are doing so much, they’re organising, they’re litigating, they’re speaking on panels, they’re doing media.

“I think there’s momentum that’s snowballed and empowered young people, and let them know they can actually do things and change things. It takes a lot to fight and put yourself forward, but it can also be empowering.”

The challenge, though, is ever-present, and Sharma says even when she manages to switch off, the deluge of information when she returns can be overwhelming.

“You can’t escape the news, and at one point or another you’re going to have to come back to it, and … when you come back to all of the news all at once, that can accelerate [the anxiety] more,” she says.

She has seen others moved to the attitude that “nothing matters at this point, because so much is going wrong”.

Powerful owls are gentle giants stalking our suburbs, but they are also on the edge | Australian bird of the year (2021)