When Layne Beachley secured her seventh and last world title at Honolua Bay back in 2006, she knew the benchmark she had just set would not stand forever. But Beachley didn’t realise that the fresh-faced teenager tearing it up on the qualifying circuit at the time would be the one who threatens to surpass her achievement.

This week at the iconic Californian break at Lower Trestles, Stephanie Gilmore, who brimmed with confidence and potential 15 years ago, has a golden opportunity to move ahead of her fellow Australian by winning a record eighth world title at the inaugural winner-takes-all, one-day World Surf League finals event.

Victory in the five-strong field in a new format introduced by the WSL would mark Gilmore out on her own as the most successful woman in pro surfing history, after she drew level with Beachley at the conclusion of the 2018 WSL season.

Yet Beachley, a member of the Surfing Hall of Fame and whose six consecutive world titles between 1998 and 2003 remains an unrivalled record, believes Gilmore is already the greatest of all time.

“She’s already referred to as the GOAT,” Beachley says. “I don’t know how many more times she’s going to have to win before she truly lays claims to that. She’s already the GOAT and I’m not sure another world title will change that at all.”

Gilmore is now a seasoned veteran at the age of 33, but she was just beginning to make the surfing world sit up and take notice when Beachley reigned supreme in the mid-2000s. After a number of eye-catching displays in the main tour’s qualifying series, Gilmore was promoted to the ASP World Tour in 2007 and stunned the competition, including Beachley, to win four of eight events and claim the world title in her debut season.

Layne Beachley competing in the Roxy Pro at Haleiwa Alii Beach in Hawaii in 2001. ‘She’s already the GOAT and I’m not sure another world title will change that,” Beachley says of Gilmore. Photograph: Getty Images

Even before that victory was in the bag, Gilmore had already made it clear she had Beachley’s record in her sights. “Steph made that declaration when she first joined the tour,” Beachley says. “She declared to me that she saw me as a stepping stone. She already had her ambitions of winning 10 world titles, not seven.”

Gilmore went on to defend her maiden title over the next three years – in 2008, 2009 and 2010 – before further successes in 2012 and 2014. Her last came in 2018, and another milestone is now in reach. However, given the format of the WSL’s new high-stakes finals, surpassing Beachley is far from a foregone conclusion.

Featuring the top five surfers on the WSL tour leaderboard at the end of the 2021 regular season, the finals could start on Thursday (Friday morning AEST), when the nine-day window for competition opens. Conditions in San Clemente will dictate exactly when the surfers hit the water, but when they do, Gilmore will have to win three heats against the best surfers in the world before getting the chance to go up against top seed Carissa Moore in a title decider.

Moore’s position at the top of the WSL rankings at season’s end gifted her passage straight through to the final, whereas Gilmore, who finished fifth, will have to get past fourth-ranked Johanne Defay of France, then fellow Australian Olympian Sally Fitzgibbons and finally Brazil’s No 2-ranked Tatiana Weston-Webb if she is to reach the best-of-three finale with Moore.

Four wins against such illustrious opposition in a single day, when the pressure is on, is a tough proposition. But Beachley believes Gilmore is as well prepared as any of her rivals.

“She does have the hardest runs to the final, but she’s also the most experience in the field,” Beachley says. “So she’s got plenty going for her. She’s in scintillating form and she’s still extremely competitive and passionate about it so I’ve no doubt she’ll go around another year if she’s unable to fulfil her dream and potential this year.” 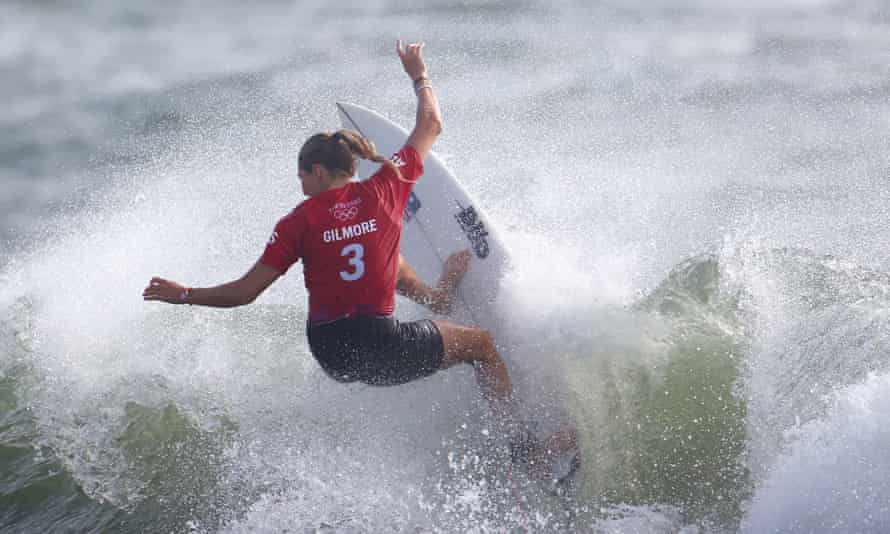 However it pans out on the Californian coastline, Gilmore’s love of the sport is certain to shine through. It is rarely, if ever, concealed – a quality that, along with a wildly competitive streak, leads Beachley to describe her as a “smiling assassin”.

“Steph is the only surfer I know who exudes sheer joy when she paddles into a wave,” Beachley says. “She’s so passionate and driven and fierce, but she does it with immense grace, beauty and style, both in and out of the water. She’s my inspiration in so many ways.

“I had a complete opposite mentality and approach to the tour. I saw it all as a struggle and believed success had to be hard. Steph disproves that belief in so many ways and makes success and competitive surfing look easy, effortless and fun.

“Sometimes if I’m unable to seek that inspiration in my own life I use her as my inspiration to detach me from struggle mode and enjoy all that it has to offer.”

Signed, sealed and delivered: how to send a parcel fast amid postal delays in Australia | Australian lifestyle

‘It breaks my heart’: Australian parents say mental health strain on their children is worsening | Health