“They’ll say I’m a pain in the arse,” the South Australian senator Rex Patrick declares, when he finds out a profile is in the works.

That precise phrase does not come up while garnering people’s opinions of Patrick. “Obsessive” comes up a couple of times. “Like a dog with a bone” is repeated. “Highly ambitious,” one observes, wryly.

He is certainly causing the federal government some discomfort at the moment. This month he won a freedom of information battle by arguing that cabinet confidentiality did not extend to prime minister Scott Morrison’s the national cabinet.

He is also on a mission to force the government to reveal secret documents about its negotiations with Timor-Leste. Patrick has been a consistent critic of the federal government’s pursuit of the whistleblower and former spy Witness K and his lawyer Bernard Collaery over their alleged roles in exposing Australia’s bugging of its poorer neighbour.

And he is also behind an ongoing bid to publish a list of companies who received jobkeeper and the amount they received, as pressure mounts for profit-making companies to repay the money they claimed.

Everyone knew Patrick’s predecessor, the SA senator Nick Xenophon. Xenophon went from running on a “no pokies” platform for state parliament to putting together a federal team that outgunned Labor at the 2013 election. He was the master of one-liners, of stunts, of picking up a popular issue and running with it.

But Rex Patrick? Few would have heard of Patrick before he stepped into Xenophon’s spot in 2017 after Xenophon abdicated his position for an ill-fated tilt at state politics. It might be that the public find him a little harder to place because of his convoluted political origin story.

He worked for the Nick Xenophon Team while Xenophon, Stirling Griff and Skye Kakoschke-Moore were in the Senate and Rebekha Sharkie was the member for Mayo. When Xenophon left Patrick took his spot and the party changed its name to Centre Alliance. Last August Patrick blindsided his colleagues and left the party altogether to run as an independent, the sole representative of the Rex Patrick Team.

At the time Griff seemed unsurprised, saying Patrick had been “running his own race for some time”.

“It’s no surprise that he is taking the step to divorce himself from the party that selected him,” he said.

Xenophon himself still expresses disappointment today, although he wishes Patrick well personally: like Sharkie and Stirling, he says, the independent works hard, “but obviously I’m disappointed that Rex broke away from a very powerful voting bloc that stood up and got results for SA”.

Patrick explains it like this: in the Senate, there are either well-branded parties – like the Greens – or well-branded people – like Jacqui Lambie, and he didn’t think the Centre Alliance brand would work. “I was looking at the cold, hard facts of whether or not Stirling or I would get re-elected, and in my view neither of us would,” he says.

Before entering politics Patrick was well-known in defence circles. The former navy submariner worked in the defence industry and wrote for the Australian Strategic Policy Institute about Australia’s planned new submarine fleet.

He caught the ear of the then defence minister David Johnston, had dinner with him, and told him what he really thought about the problems that were plaguing the existing Collins Class fleet at the time.

He says he was offered a formal advisory gig in Johnston’s office but refused because he felt that unelected people in the prime minister Tony Abbott’s office at the time (he names the foreign policy adviser Andrew Shearer and Abbott’s chief of staff, Peta Credlin) had too much influence. And he liked the cut of Xenophon’s jib.

While the major parties have to consider the party line and their career paths before solving a problem, he says, “Nick didn’t have to do that.

As with others who score a Senate spot without going to the polls, Patrick is often called an “accidental” senator. The bureaucrats who have faced his relentless grilling in estimates might be surprised to hear that he hasn’t always been so headstrong.

He joined the navy because someone said it would be a good idea. Then he wanted to work as a radar plotter, tracking aircraft and protecting missiles. But someone else suggested he do electronics, so he did, and ended up on submarines.

He’s the youngest of four, the baby of the family. “Yeah, I think I was an accident there, too,” he says.

Born in New Zealand (so he was among those facing questions during the dual citizenship crisis of 2017, questions he faced down), he moved to Whyalla as a young boy with his parents and three older siblings.

His brother Wayne says because he was six years older, he doesn’t have strong memories of the senator as a small boy but he thought Patrick was “pretty brave” for joining the navy at 16.

“He’s quite independent,” he says. “He’s always on the go. I can’t keep up with him. He’s always looking for something new.”

The former submariner’s first big media splash – when he was still a Xenophon staffer – came when he was given a USB stick that had 22,400 pages of secret information about a French-designed submarine – just as Australia was considering signing a deal for France to design its submarines.

After telling Defence about it and hearing nothing, he gave the story to the Australian.

It was the first of many headlines that Patrick has been responsible for about Australia’s bumpy submarine program. Those, and his advocacy for the Murray-Darling basin plan, are his main SA-specific battles – although some insiders say they won’t be enough to see him re-elected at the next election (when Xenophon’s term would have been up).

If I’ve got a sniff … I will keep going with it. I won’t give up just because there’s a challenge in front of me

Today the 54-year-old is in lockdown in Canberra, his casual “I’m with Team Rex Patrick” T-shirt contrasting against the flags arranged behind him – Australian, Aboriginal and Torres Strait Islander. He takes a call from Audrey, one of his two daughters with his “amicably” estranged wife, who wants to know how much she can spend on a friend’s birthday present. Audrey has him wrapped around her little finger, he says, rolling his eyes – after he’s agreed to give her the requested money for the present.

In his work life, there are plenty who wish he were so easily swayed. And those who work with him – as parliamentary colleagues or press gallery contacts – are reluctant to go on the record, with good reason. People need him. Politicians need him for his crossbench vote, and journalists need him for stories.

One points to a story where Patrick said splitting from Centre Alliance was a “marketing” move.

“He wasn’t elected and he came in, he received a Senate ticket … you can draw your own conclusion,” they say. “He’s clearly, from his actions, a highly ambitious person.”

And another: “I think he is incredibly obsessive about a topic once he gets interested in it. He’s like a dog with a bone. He’s quite fearless in the way he approaches things.”

Another calls him a gadfly, flitting from issue to issue – “it’s from the Xenophon playbook, but it gets him publicity. I do think he’s genuinely interested in policy, more than Xenophon was … ”

(Patrick says if he senses he’s not going to get anywhere, he’ll change course. “But if I’ve got a sniff … I will keep going with it. I won’t give up just because there’s a challenge in front of me.”)

Another points to the wins he’s had in obtaining documents the government would prefer were kept secret.

“He’ll be sorely missed if he does go,” they say. “He’s great to work with. Totally energetic. Having said that, I’ve never been on his bad side …

“There are a lot of stunts but he doesn’t deliver. He talks big but actually caves into the government all too easily… there’s a lot of posturing.” 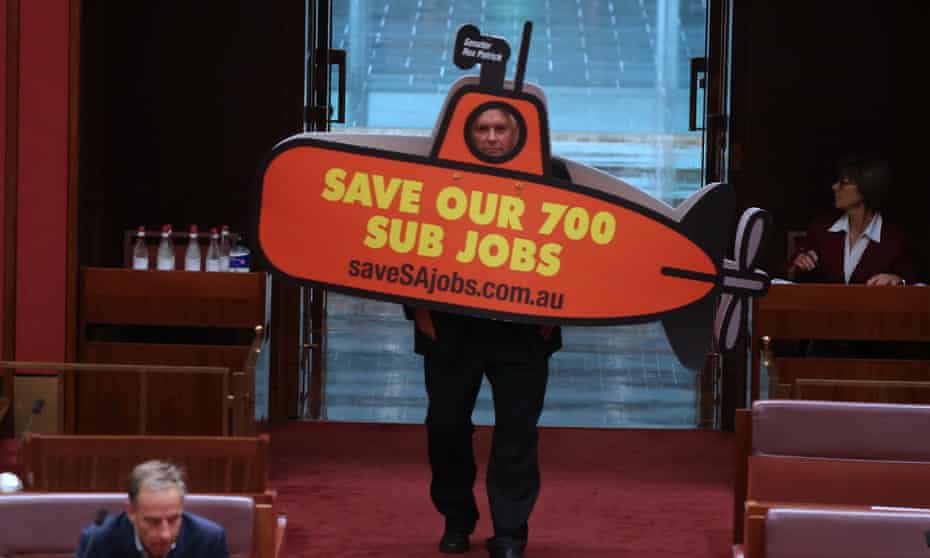 Patrick says his stunts (including wearing a submarine costume to question time) are about drawing attention to particular issues, and says he is always working in front of and behind the scenes to bring about change. He has been able to force the government to reveal documents, successfully amended legislation, and put pressure on the government to keep submarine maintenance work in South Australia.

“I don’t win them all, but I have had significant wins,” he says. “There are many, many things that I’ve done, and many of them are very subtle … calling things out in the chamber creates the political pressure that brings about change.”

Several compare him unfavourably with Xenophon: “I think of him as a poor man’s version of Nick,” one says. “He has the political shrewdness of Nick Xenophon but none of his affable charm,” says another.

The way Patrick sees it, Xenophon would listen to someone and form an emotional connection with them: “I’d be standing beside him … and I’d say to him, ‘Hey, mate, there’s only so many things we can do here.’

“I don’t think I’m as charismatic as Nick.”

He’s not fussed that he hasn’t reached Xenophon’s stratospheric levels of popularity. And anyway, he has a media strategy.

“I started with doing print stuff first … then I started doing radio, and now I’ve moved to television. I’m in the media every day now.

“I don’t have the same recognition as Nick … but I haven’t had as long in the game.”

There have been hints about the existence of a nude video of Patrick.

It might be true, he says, unconcerned. After taking a seaplane out to the Murray River to crash a houseboat party when he was younger, he went skinny dipping.

“I was 18 and handsome … and it was probably on Betamax.”

Patrick also wants to clarify his earlier remark about being a “pain in the arse”.

“I do cause trouble,” he says. “But it’s public interest trouble.”

Six months ago I set out to buy beds for my children. Seasons passed. The beds did not come | Australian lifestyle