Queensland authorities say they hope to open the New South Wales border within 10 weeks, but in the meantime the state continues to ratchet up its toughest-ever pandemic blockade, including temporarily stopping people moving from interstate.

On Wednesday Queensland recorded no new Covid-19 cases, while the NSW outbreak – which grew by 919 new cases on the same day – has spread to within 20km of the closed border.

The Queensland premier, Annastacia Palaszczuk, said on Wednesday that large numbers of arrivals from NSW, Victoria and the ACT had placed an unprecedented strain on the hotel quarantine system. There are more than 5,000 people in hotel quarantine and the majority are relocating from interstate.

Palaszczuk announced a two-week ban on people moving to Queensland, and said thereafter hotel quarantine places would be limited. People would need to reapply for “right of entry” passes and also book a hotel place.

“We simply do not have any room at the moment,” she said. “Queensland is being loved to death.” 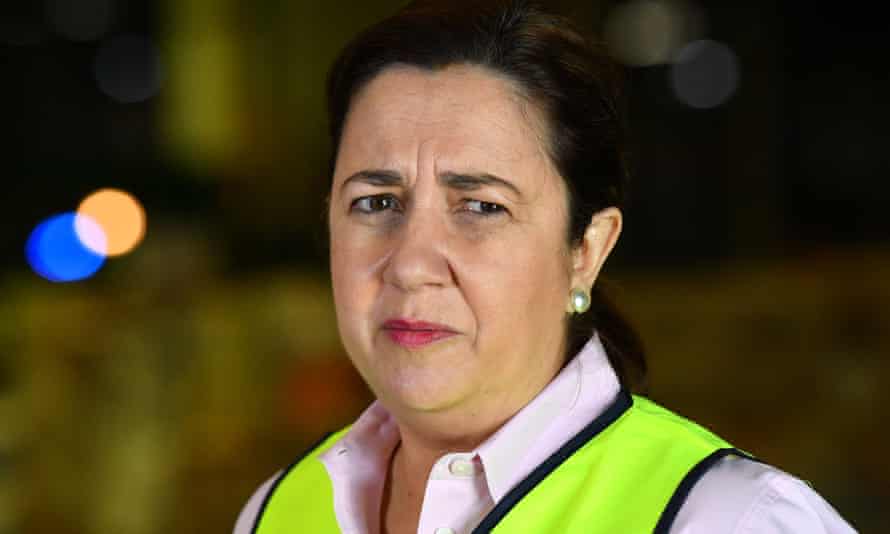 Queensland premier Annastacia Palaszczuk: ‘We have been overwhelmed by new arrivals from interstate hotspots relocating to Queensland to escape lockdowns in NSW and Victoria.’ Photograph: Darren England/AAP

“The chief health officer hopes restrictions will be in place no longer than 10 weeks, however nothing has been formalised to that effect,” the Queensland health department said in a statement.

“This is based on the timeframe in which we hope to have 70% of Queenslanders fully vaccinated against Covid-19.

“We regularly review restrictions and will ease or lift them as soon as it is safe to do so, however the reality is outbreaks in southern states will not just disappear over the next few weeks.”

The announcements come as more than Australian defence force personnel began duty at border checkpoints, to help enforce the strictest measures in place since the start of the pandemic. Exemptions to cross are limited to only a small list of essential purposes.

At the same time, businesses, farmers and border communities continue to struggle with the strict rules.

Farmers are allowed to cross the border for essential purposes related to agriculture, but some say their movements are subject to interpretation by local police at checkpoints.

Sam Heagney, a farmer from the NSW side of the border near Mungindi, said he holds a valid border pass but was blocked from entering Queensland to take an equipment part to an engineer at St George.

He said the border rules were supposed to allow agriculture to continue but the lack of clarity was creating issues for farmers on both sides. Harvest is looming in the region.

“It does raise a few alarm bells coming into harvest, how we’re going to manage that,” Heagney said.

“So much of [the border rules] is open to interpretation. My interpretation of essential work could be different to police on the checkpoint. It’s just extremely strict.

“It will mean difficulty for Queensland farmers, for winter crop grain harvest. It’s going to be very difficult for contract harvesters from NSW or Victoria to get into Queensland and harvest the crop.”

Residents in the town of Mungindi say the border closure has cut them off from the local hospital, vaccinations and other essential services. The town straddles the border and most residents live in NSW.

The local ambulance service is provided by NSW but the hospital is in Queensland and run by the northern state.

At the weekend, the health service in Mungindi was suspended by Queensland authorities.

The NSW MP for the area, Adam Marshall, wrote to Palaszczuk to protest the suspension and said it had come with “no notice”.

Marshall said no other health services were available for 120km.

“To highlight the ridiculousness of this situation, locals now cannot even access the hospital for their Covid-19 vaccination appointments,” Marshall said in his letter to Palaszczuk.

“No one can explain to me, nor the local community, the rationale behind this unprecedented decision.

“It is denying locals their basic right to access medical services. It’s putting the community’s health, and the lives of locals, at extreme risk.”

On the southern Gold Coast, businesses say they are struggling due to the closed border.

Palaszczuk’s pandemic management – and a successful re-election campaign last year – has been built around a Queensland-first rhetoric.

While NSW is in lockdown and its case numbers are growing, the sunshine state is emerging from winter with relatively few local restrictions in place.

Palaszczuk said the suspension of interstate migration was “about keeping Queenslanders safe”.

“We have been overwhelmed by new arrivals from interstate hotspots relocating to Queensland to escape lockdowns in NSW and Victoria.

“While we have allowed genuine relocations for work and other purposes, it has overwhelmed our hotels and it has to be stopped at least for the next fortnight.”

Palaszczuk said that between 9 August and 20 August, Queensland granted 2,750 border passes for people to relocate.

“While Queensland has welcomed more than 30,000 [people] moving from other states to a better life in Queensland, these numbers cannot be managed in hotel quarantine at the current rate.”

DaBaby jokes about being “cancelled” in video for new freestyle