Based on Liane Moriarty’s best-seller, Nine Perfect Strangers is the new series from the team behind Big Little Lies – and it’s come along just in time to transport us away from our grim locked-down lives to a beautiful place that promises nothing less than total transformation. Nine Perfect Strangers was filmed last year in the Covid-free environs in the Byron Bay hinterland, standing in for California, and is set in an upmarket, exclusive wellness retreat – Tranquillum House. And our retreat leader? The mesmerising Masha played by Nicole Kidman.

For those of us watching, unable to leave our houses, the idea of a complete reset at a luxurious resort is cruelly tantalising. But this is no ordinary wellness retreat. For a start the nine guests (an amazing ensemble cast featuring Michael Shannon, Luke Evans, Bobby Cannavale, Regina Hall, Samara Weaving, Melvin Gregg, Asher Keddie, Grace Van Patten, Tiffany Boone and Manny Jacinto ) have been specially hand selected – and each one is grappling with the cards life has dealt them.

Each retreat worth its salt has its own leader or guru. They give the participants the hard medicine they need in order to get over whatever life roadblock or personality defect is holding them back. The most interesting and dangerous retreats are the ones where the leader could either be an absolute genius or a terrifying charlatan. The line can be fine. Trust is everything.

It’s a line Kidman walks with aplomb. She – of course – is the guru. The guru she plays, Masha, is Russian (hard to tell if the accent is good, but it does sound a little weird at first). Masha is always dressed in pale flowing dresses, and is very thin and very ageless. She has hair like Galadriel. It’s a role that allows Kidman to make the most of her almost emotionless mask-like, very smooth, otherworldly face and intelligent, knowing eyes.

Masha’s mystique precedes her – she was a corporate CEO who was working herself hard before a near-death experience pushed her towards enlightenment. She left her old life behind and founded the retreat centre. Her mystique explains why initially the guests are prepared to go along with some of the more extreme wellness activities (fasting and grave digging among them). 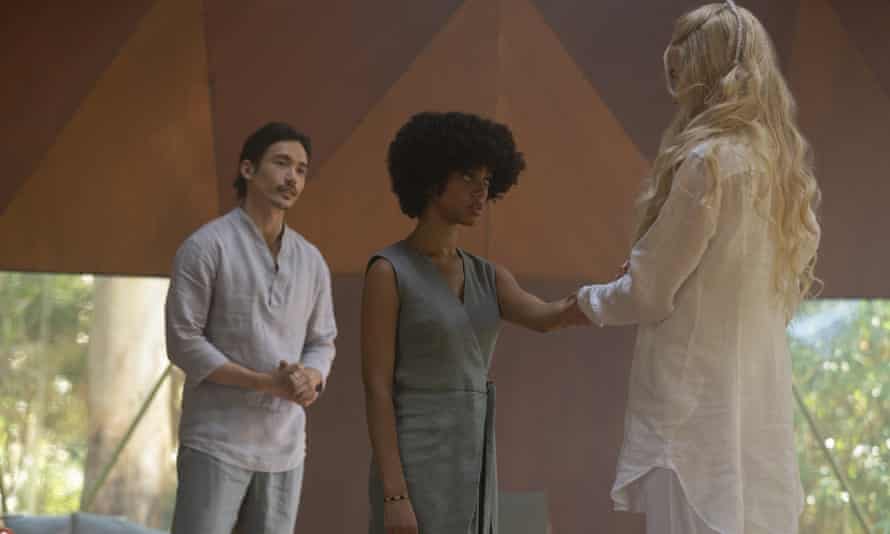 Each guest has not only a wound, but a limit to what they’ll accept from Masha and the unconventional retreat. Photograph: Vince Valitutti/Hulu

These guests (the nine perfect strangers) are in need of some healing.

One family is grieving after a child’s suicide. Another is addicted to prescription meds after a sporting career goes off the rails. Another can’t recover from the pain of a broken marriage.

But each guest has not only a wound (a secret pain, a secret vulnerability or just a plain old-fashioned secret) but a limit to what they’ll accept from Masha and the unconventional retreat. Part of the suspense of watching Nine Perfect Strangers is seeing when each guest breaks.

At one point the retreat descends into Lord of the Flies territory after the guests are deprived of food and told to hunt and forage for their next meal. Even the seemingly perfect staff all have their breaking point.

And while the show has a strong element of mystery and suspense (who is sending Masha threatening texts? And who is Masha really?), it is the human journey of the strangers towards “wellness” that is the most compelling part of the series.

As a veteran of dozens of wellness retreats, the storylines – although nudging the fantastical (are the guests being drugged? Is someone trying to kill the retreat director) – are grounded in what actually happens in the wellness world.

There really are retreats you can go to, just out of Sydney, where you are required to dig your own grave then lie in it while retreat staff throw dirt on you and tell you to visualise your own death.

I’ve also been to places where you are encouraged to be violent towards a mannequin that represents a hurtful figure in your life. (Melissa McCarthy does a great scene where she takes a stick to a stand-in cad.) And increasingly there are retreats where you can take psychedelics such as ayahuasca to fast-track a spiritual experience.

Is Nine Perfect Strangers worth the hype – and the big budget? Absolutely. Each character starts off as a bit of a cliche, but over the six episodes I watched, becomes deeper, more complex and ultimately more sympathetic (especially the Asher Keddie character, who is almost painfully and unwatchably angry at the start of the show).

Nine Perfect Strangers also looks really, really good. The beauty of the Byron shire might be feeling a bit soiled with the recent problems around filming in the area. But the production is transfused with that gorgeous northern New South Wales light that can’t help but make you feel well.