As the state recorded 535 new cases and one death, around 1,000 protesters gathered in the north-eastern suburbs of Richmond and Hawthorn, forced to make a last-minute change of location after 2,000 police officers formed a “ring of steel” around the Melbourne CBD.

The Victoria police commander Mark Galliott told reporters on Saturday 235 protesters were arrested, including 193 people who would also be fined for breaching the public health orders.

He said the remaining group were arrested for a range of offences including assaulting police, riotous behaviour, weapons and drug offences.

Galliott said of the 10 officers injured, six were hospitalised and three remained there with injuries including torn muscles, broken bones and bruises.

Police said they had items including stones, bottles and other objects thrown at them during the protests, while others were injured when they were trampled on by demonstrators.

“What we saw today was a group of protesters that came together not to protest freedoms, but simply to take on and have a fight with the police,” Galliott said.

“That’s what we say, were angry, aggressive young males there to fight the police.”

Galliott also defended the police operation, which aimed to keep the protesters out of the CBD, saying it was a “great preventative measure”.

Public transport to and from the city was suspended between 8am and 2pm on Saturday, and police set up road checkpoints, barricades and roving patrols around the city in an effort to thwart the protest.

Barricades of police officers originally managed to confine protesters on Burnley Street in Richmond. That was until some protesters opened the locked gate to a residential apartment complex, allowing them to escape authorities on to Bridge Road.

Footage from the ground showed protesters clashing with police on several occasions.

At one point, protesters were filmed throwing objects – including water bottles and a traffic cone – at police, who had formed a human barricade, blocking the march. In response, police deployed pepper spray.

Protesters were also filmed charging at and breaking through the police line. One officer fell to the ground and was trampled by demonstrators.

Multiple people who attended the rally have reportedly been arrested.

Victoria police chief commissioner Shane Patton told reporters this week that it would be the biggest Victoria police operation since the 2000 World Economic Forum was held in Melbourne.

Police were trying to avoid a repeat of what happened on the 21 August, when about 4,000 people attended a violent anti-lockdown protest in Melbourne.

Victoria wasn’t the only state hit with anti-lockdown protests on Saturday.

In Sydney, police were out in force to deter planned protests and demonstrators were arrested for breaching stay-at-home orders as New South Wales surpassed 50,000 Covid cases since the start of the pandemic.

Between 200 and 300 demonstrators also took to the street in the northern NSW town of Byron Bay, with 11 people arrested.

NSW police said 32 people had been arrested across the state, 20 of whom were in Sydney. They said 265 infringement notices had been issued for a range of breaches including failing to wear a face mask, 232 of which were in metropolitan Sydney.

“I’m pleased to see that common sense has prevailed and the vast majority of people have complied with the existing public health orders,” the police minister, David Elliott, said.

Some 1,700 officers were deployed across the state to manage the potential protests.

“Today’s operation has been very successful. Our aim was to prevent the protest activity going ahead … and if you have a look at the results you will see our actions have been well received by the public,” the police assistant commissioner, Peter Thurtell, said.

Brisbane also saw a sizeable anti-lockdown protest take place, despite the fact that the state is not in lockdown.

Victoria’s announcement of 535 new Covid-19 cases is the state’s highest recorded daily total this year and brings the total number of active infections to 4974.

Only 62 of today’s cases were linked to known outbreaks.

Authorities said that a woman in her 70s from the greater Shepparton region had died from Covid-19.

Kate Matson, from the Victoria Department of Health, said they were particularly concerned about 62 new cases in the northern suburb of Craigieburn, and 15 new cases in regional Victoria.

The Victorian health minister, Martin Foley, told reporters that the state’s contact tracing system was struggling to keep up with the surge in daily cases, meaning it was taking longer for them to contact those who are testing positive for Covid-19. 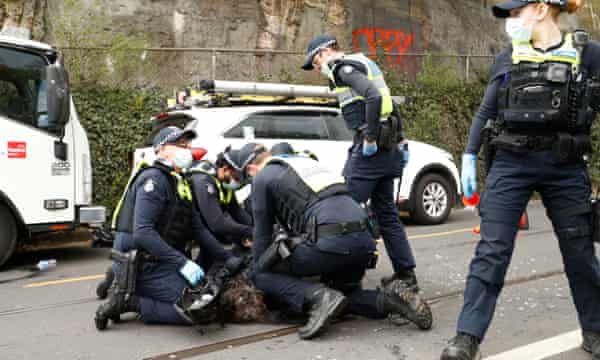 “When you’ve got several thousand cases, that’s got to be dealt with in a different way than if there’s several hundred cases.”

Matson said that the department was instead starting to send text messages to advise people that they had tested positive, in an effort to speed up the process.

“We do expect that as case numbers rise throughout this week that we’ll be changing and adapting those processes further … We will also be moving to make phone calls first based on risk,” she said.

More than 70% of the eligible state population have received at least their first dose of a Covid-19 vaccine. Victorian government authorities are expected to outline a full roadmap out of lockdown on Sunday.

However, Foley warned that states and territories were advised by the commonwealth in national cabinet on Friday that there would be delays in Pfizer supply next month.

Asked if he was frustrated, Foley said “yes”.

In line with the Berejiklian government’s decision to not host press conferences every day, Saturday’s Covid-19 update for the state was delivered by NSW Health’s Dr Jeremy McAnulty and broadcast on Facebook. There appeared to be no journalists in attendance as no questions were asked or responded to.

Queensland only reported one new Covid-19 case overnight, who had been in quarantine for their entire infectious period.