John Elliott’s life was a business, sporting and political roller-coaster.

The larger-than-life character, who many Liberals once touted as a future Australia’s prime minister, built and lost a mighty business empire and led the Carlton football club through good times and bad.

The gravel-voiced and aggressive chain smoker could be offensive, at least to those of a politically correct disposition.

In the late 1980s, when he was federal president of the Liberal party and boss of Elders IXL, Elliott was one of the most prominent and closely watched figures in Australian public life.

John Dorman Elliott, who died on Thursday aged 79, was born in Melbourne on 3 October 1941, and educated at Carey Baptist grammar school and the University of Melbourne where he gained an honours degree in commerce. He later completed an MBA.

After a short period as a BHP cadet, he joined the international consultancy firm McKinsey for six years, which he later said was the best learning experience a young man could have.

Since his teens, he had wanted to get into business. He spent nine months looking for the right vehicle – an under-managed company that was long on assets.

He eventually settled on a Tasmanian jam factory, Henry Jones IXL, even though it was twice as big a purchase as he had anticipated. He rounded up about $30m, largely from Melbourne establishment companies, to complete the deal in 1973.

Elliott masterminded a series of acquisitions over more than a decade, including a reverse takeover of the big stock and station agency business Elder Smith Goldsbrough Mort.

An even bigger expansion came in 1983 with the takeover of Fosters beer giant Carlton and United Breweries. This time it was New Zealand corporate raider Ron Brierley who was frustrated by Elliott and his ability to raise huge amounts of money quickly.

In 1985, Elliott launched a takeover bid for British brewing giant Allied-Lyons. This failed, but shortly after Elders acquired England’s sixth-biggest brewery, Courage, for $2.1bn. This gave him control of 5,000 pubs which, naturally, began to serve Fosters.

“But she wouldn’t let him be a paid consultant, which was bad luck, because I thought the pillow talk might help,” Elliott said in an ABC television interview.

Elliott later crossed swords again with Robert Holmes à Court, this time over Bell Group’s hostile bid for BHP. This resulted in Elders IXL and the mining giant holding substantial equity in each other.

At the same time, Elliott was becoming a major figure in the VFL/AFL, through his presidency of Carlton, and a leading player in the organisational wing of the Liberal party, as federal treasurer from 1985-87 and then as federal president. Unlike most party officers, who tend to operate back room, he kept making widely reported speeches and straying into policy.

This was at a time when the John Howard-Andrew Peacock rivalry was at its height and many in the party, particularly Victorians, saw the successful, confident Elliott as their saviour.

Elliott targeted the federal Victorian seat of Higgins, a safe Liberal seat he thought he could win in a byelection.

But his board gave him six months to decide between business and politics and with Roger Shipton, the member for Higgins, refusing to move, Elliott’s ambitions came to nothing. 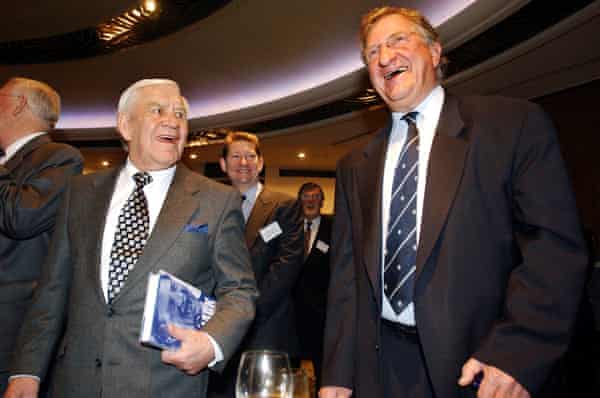 From about 1990 Elliott – like other shooting stars of the business world in the 1980s – started falling to earth.

The main cause was Harlin Holdings Group, a private investment firm owned mainly by Elders managers and led by Elliott, which started buying up the company to protect it against takeovers but ended with a far greater share than it intended and a debt of $2.8bn.

Elliott, who had been forced to sell non-core assets, was replaced as chief executive in 1990 – the year it reported a $1.3bn loss which at the time was the largest in Australian corporate history.

The following year it changed its name to Fosters Brewing and Elliott was replaced as chairman, although he remained on the board until 1992.

The National Crime Authority launched a long investigation into foreign exchange transactions. When this finally came to nothing, Elliott launched an unsuccessful damages action.

Elliott moved into rice milling through Water Wheel Holdings, which collapsed in 2000.

In 2003, the Victorian supreme court ordered him to pay $1.4m in compensation after finding he had allowed the company to trade while insolvent.

In 2005, Elliott declared himself bankrupt. His Toorak mansion was already gone – sold for about $11m. And much that was in it, such as English oak furniture and 17th-century silver, had been auctioned.

His almost two-decade-long Carlton presidency ended in 2002, a period during which the club won both flags and the wooden spoon. After his departure, Carlton was fined almost $1m and lost draft picks for breaching the AFL salary cap. Despite his fall, Elliott remained unapologetic.

He blamed the then-federal Labor government for the NCA investigation and said the judge’s decision in the Water Wheel matter was “very wrong”.

He maintained that the salary cap and draft, that got Carlton into strife, were themselves illegal and the club should have taken the AFL to court.

Elliott said fighting legal cases cost him $11m, and his two wives cost much the same.

After his bankruptcy was lifted, Elliott dabbled in commodity trading and business consulting, joined the professional speaking circuit and created his website The John Elliott Report.

Elliott was a father to four – Tom, Caroline, Edward and Alexandra.