The recovery in hospital felt unbearably long for 18-year-old Donna Nguyen, who lay limp in her bed for six days, unable to sit up to even look outside her window.

“When you’re in that state, with no clear trajectory of getting better, you lose the joy in everything,” she says.

“Even looking at things. Nurses would come into my room in full PPE, and I couldn’t process them as people.”

In June, Donna and her housemates Sam McMahon and Alex Sumption were visited in their western Sydney home by a friend, who was celebrating a birthday.

On Friday morning, just two days later, she received a call from that friend. His father had tested positive to the highly contagious Delta Covid strain.

‘It took four tests to come back positive’

Sam lives in the main house with his mother, stepfather and 13-year-old sister. His best friends, Donna and Alex, also 18, live in the granny flat behind the home.

“My mum is immunocompromised,” Sam says.

“So the moment we were told our friend’s dad had tested positive, I grabbed a travel pack and isolated myself with Donna and Alex in the granny flat.”

Sam says getting through his Covid infection ‘felt like a fever dream’. Photograph: Carly Earl/The Guardian

The teenagers got tested that day. The results came back negative. They got tested again the following Monday.

“That was the second test and it was still looking alright.” They all tested negative.

Days later, they were officially recognised as close contacts of the positive case by NSW Health. They were tested a third time, again receiving negative results.

The next morning, however, Sam, Donna and Alex were symptomatic.

“I had a bad headache, and a terrible cough. I’d never coughed like that before,” Sam says.

Later that day, the fever kicked in. They knew this was very wrong.

“We knew we had to go and get a fourth test,” Sam says.

The next day, Friday, exactly a week after they first got tested, the results came back positive.

What followed, they say, were confusing conversations and directives from NSW Health, which organised the friends’ isolation and transportation to hotel quarantine.

Sam, Donna and Alex all had separate interviews with contact tracers, and were told different things.

“Then we were told we didn’t have any options. We’d be picked up that night to be sent to a hotel. Then that pick-up was moved to the next morning.”

“It was confusing,” Sam says. “You could see NSW Health was under a lot of stress already.”

It took almost five days for the friends to be notified as close contacts by NSW Health.

“If we didn’t take initiative to isolate before then and to keep getting tested, we would’ve been out in the community,” Sam says. “I work at a restaurant. I would have been serving hundreds of customers a day.”

Conscious of each other’s mental health, the friends opted to isolate together. They were transferred to a three-bedroom hotel room at Zetland in inner-Sydney.

‘It was the worst I’ve ever felt’

“It felt kind of like a fever dream,” Sam says.

“In comparison to Donna, my symptoms were mild, and it was still the worst I’ve ever felt.” 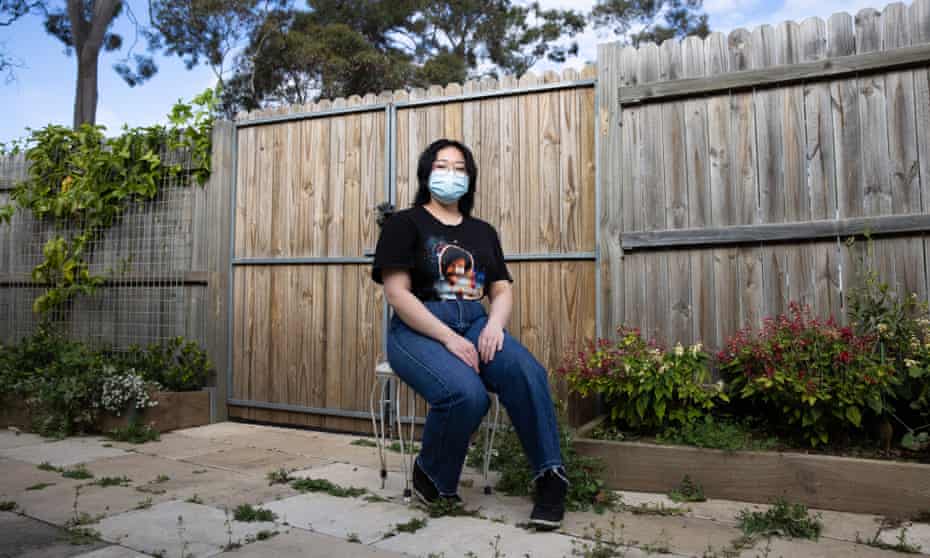 While Sam recovered within the first week, Donna continued having trouble breathing. She would either sleep all day or constantly vomit.

“Sam and I both brought games to the hotel,” Donna laughs. “We were prepared to entertain ourselves for weeks!”

But the teens couldn’t do anything, hitting a wall. “Nothing felt good but to sleep and wait for each day to pass,” she says.

On the fifth day of quarantine, Donna’s condition took a turn for the worse.

“I was passed out for 14 hours a day. Time moves so strangely when you’re in that state. Morning and night were barely distinguishable.”

Donna recalls trying to sit up in bed. “I began hyperventilating.” By this point, she had not eaten for three days. She couldn’t keep anything down.

“I remember trying to take Strepsils, and even that I would throw up. If I tried to breathe, I would cough and gag.”

Barely making it to the bathroom, Donna tried to take a shower. She passed out from the steam.

“I was excessively shivering, but was sweating and hot. I am lucky Sam and Alex were there to call for a nurse.”

Donna was taken to Royal Prince Alfred hospital, still gagging and throwing up nothing. Her visit lasted eight hours. “They said I was dehydrated, gave me laxatives (for her stomach cramps) and sent me back to the hotel,” Donna says.

‘I wasn’t certain I was going to leave hospital’

Donna wasn’t getting better. Just a few days later, she was again taken to hospital. This time, she would be there for six days. Unable to breathe or walk, she was put in an isolated room at St Vincent’s.

“On the first day, they gave me oxygen through tubes into my nose. The next day I was given a full face oxygen mask.”

When nurses tried to check Donna’s blood, her arms were too limp to find a vein. She describes not being able to make it to the bathroom, right beside her bed.

“I was catatonic for a few days.” 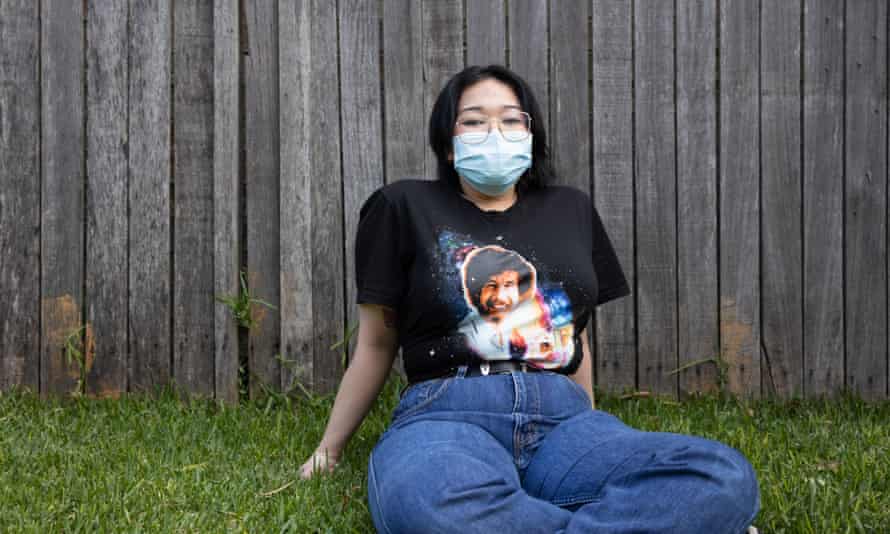 During her second visit to hospital with Covid, Donna recalls being unresponsive and ‘catatonic’. Photograph: Carly Earl/The Guardian

“My room had a nice window, looking out onto a street. But after a while, it started looking not real. Like a painting.

“I completely dissociated. I felt stuck in a mindless cycle. I lost track of reality. ”

Donna recalls a doctor offering her a trial medicine. “It was a risk, and my head was hazy, but I was willing to take anything to feel better.”

On day six, she finally turned a corner.

Young people need to know this is not just another flu. You can catch Covid too

After being notified this was her final day in hospital, she says “a few hours felt like hell. I knew I would get out. I finally had something to look toward.”

But her return home was challenging.

Her body had much to recover from.

“I couldn’t walk for more than an hour at an average pace. I am still like that. I try to walk my dog, and I come back after an hour and my legs are shaking.”

She describes the anxiety of having Covid as intense. “Getting hit with something people are still learning about is terrifying. And so is the fact I got hit so badly as a young person.

“I’m eighteen. I still feel like a child. I’ve never had a health issue and rarely get sick. I was waiting for my second semester of my first year of uni. Next thing I know I’m in the hospital strapped up to an oxygen mask.”

‘Young people need to know this is not just another flu’ 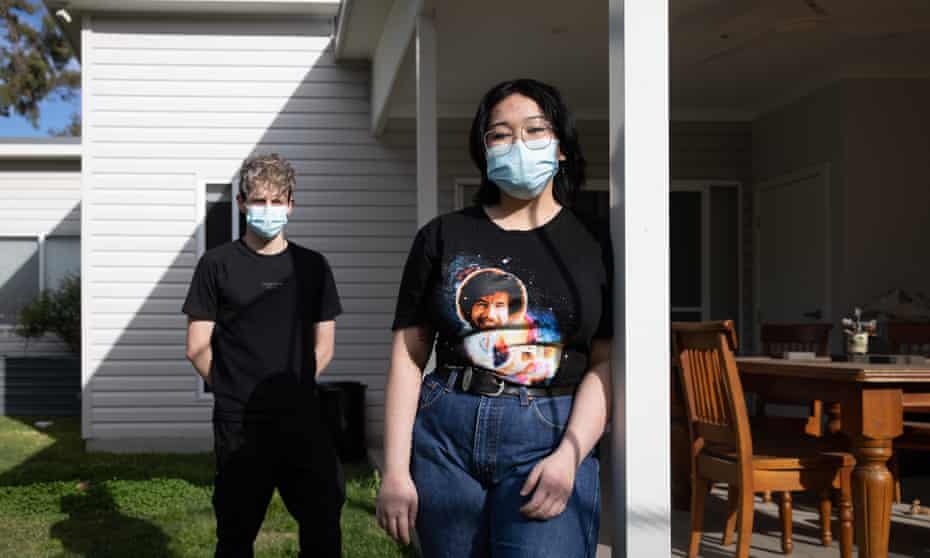 Sam and Donna thought they’d be the last people to contract Covid.

“My friends and I have always been diligent,” Sam says. “We wore face masks before they were a requirement. I drive around with four tonnes of hand sanitiser in my car.”

“Young people need to know this is not just another flu. You can catch Covid too.”

An urge to vaccinate young people between ages 16 and 39 in local government areas of concern has seen roughly 200,000 vaccinations booked within a week. NSW Health is hoping to see that number more than double, with more than 500,000 vaccines available for the “priority” group.

“And people are still going to protests. They think they’re excluded from the effects of this thing. It is fucked. Can you put that in capital letters?

“I am an 18-year-old kid. My body worked healthily as a body. Celebrating our friend’s birthday, within Covid guidelines, is all it took to put three 18-year-olds in quarantine, and me in hospital twice.

“Don’t underestimate Covid. Doing everything you can to avoid it is worth it. I am thankful to have survived it.”

NSW Covid roadmap explained: what can residents do when state reaches 80% double-dose vaccination and beyond? | New South Wales

‘Unconscionable’ to lift lockdowns before all Australians with disability can be vaccinated, inquiry says | Disability royal commission

‘We will teach the British how to survive’: Indigenous Australian culture hits the UK | Art