Grave dispute: why the brawl over Sydney’s cemeteries could be referred to Icac | Sydney

“The cemeteries of the state need to remain under a state operator, not under a religious entity,” the outgoing president of the Lebanese Muslim Association, Samier Dandan, says with conviction.

The Catholic church strongly disagrees. It’s fighting a New South Wales government proposal to put cemeteries on crown land under the control of a single body, and ending Catholic control of several major burial grounds. The church accuses the minister responsible, Melinda Pavey, of being “at war” with it.

Now the brawl over who controls Sydney’s cemeteries looks set to be referred to the Independent Commission Against Corruption and has already sparked threats of injunctions.

It is one of the most divisive issues faced by the NSW government in years, engulfing the Catholic church and Muslim and Jewish organisations, while pitting ministers against each other.

Despite a decision by the NSW cabinet in September last year to create a single ownership structure, OneCrown, a rearguard action by the Catholic-controlled Catholic Metropolitan Cemeteries Trust (CMCT) has upended the plan.

With the ascent of a prominent Catholic, Dominic Perrottet, to premier, the CMCT has ramped up its campaign, spearheaded by some of the most powerful lobbyists in Sydney to try to achieve its preferred option: two bodies, with the CMCT in control of the newest and the most lucrative burial grounds.

It is being met with an equally fired-up opposition.

Dandan has been campaigning on behalf of the Sydney Muslim community on the issue for more than 15 years.

Burial space is essential to Muslims, who are not permitted to cremate their loved ones. A growing share of Sydney’s population, they account for 40%-45% of in-ground burials in Sydney.

The LMA says that, as the providers of 85% of all Muslim interments, they are the body that can speak on behalf of the community, though this has been disputed by representatives of the CMCT.

The issue of who controls Sydney’s cemeteries has been prompted by the far more pressing problem: Sydney is running out of burial space.

A report, ominously titled 11th Hour: Solving Sydney’s Cemetery Crisis, which was handed to the government last year, warned that the problem of new cemeteries was urgent and could no longer be ignored.

“Some of the cemeteries that have served Sydney for a century will close within three years and all existing operational crown cemeteries will close to new burials within 10-12 years,” it found. “This is much sooner than previous timeframes indicated and requires immediate action.”

It recommended that the government set up OneCrown, a single body to run all the cemeteries, instead of the current five trusts, which include the CMCT, which is controlled by the Catholic archdiocese of Sydney.

This, it said, would lower overhead costs and was in line with the Ipart report into the costs of interment in NSW.

Ipart found that the cemeteries on crown land were not run very efficiently by the five trusts that control them. There was little transparency for consumers, who were often making a purchase at a very stressful time.

“The most effective way [to reduce costs] is by reducing indirect costs associated with an interment right,” it said. “These include the one-off administration and overheads, sales and marketing costs.”

It also identified another problem: most of the not-for-profit trusts were running at a loss and had unfunded liabilities totalling $300m. These liabilities arise because part of the cost of running a cemetery is its upkeep. People pay into a perpetual care fund when they buy a plot. But in older cemeteries these payments are not sufficient to cover the future costs.

The only trust that was in the black was the CMCT. It manages Rookwood, Liverpool and Kemps Creek, and holds the development rights for two new cemeteries at Varroville and Wallacia.

The OneCrown option has the support of Investment NSW, the Department of Planning, Industry and Environment, and Pavey, the minister for crown lands.

Supporters of the OneCrown option say the reason the Catholic trust is in better financial shape is because of the youth of its cemeteries, while the other trusts, all government-owned, are dealing with older cemeteries that are nearly full.

If the government goes for the two-body option favoured by the Catholic trust, it would have one very well resourced cemetery organisation and another with no means to maintain existing cemeteries or create new ones.

Critics say this effectively amounts to handing control of crown land and the burial business to the Catholic church.

In 2017 the Catholic church put a proposal to the NSW government for a $1bn privatisation of Sydney cemeteries. 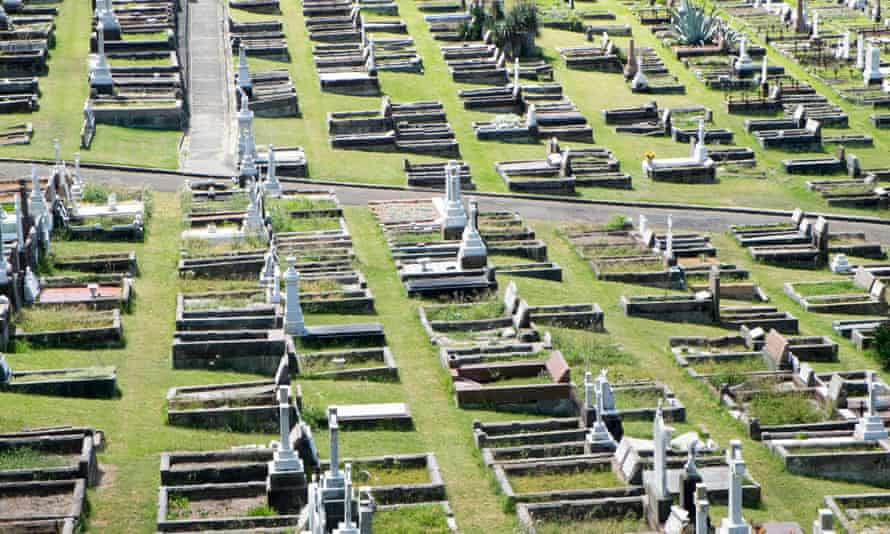 Under the selloff plan, Sydney’s four cemetery trusts currently owned by the NSW government and operating on crown land were to be consolidated into a new company and leased for 99 years to Fabrico.

Fabrico then proposed to sublease management of the combined cemeteries covering all religious faiths to the CMCT.

Perrottet, who was then treasurer, was told by his department in 2018 that the privatisation could not be dealt with under the government’s unsolicited bid rules, because it was not unique enough. It would need to go to tender.

There were then discussions among senior ministers supportive of the Catholic church’s proposal about an alternative: a deed that would lease the land for 200 years, and transfer of the perpetual care fund for $1.

The discussions were overseen by the then minister for crown lands, Paul Toole, and the finance minister, Damien Tudehope, both Catholics.

But the proposal hit resistance from the Department of Planning, Industry and Environment because it believed it would breach the direct dealing provisions.

When Pavey took over the portfolio, she asked for a statutory review that led to the OneCrown proposal.

‘We don’t want winners and losers’

The Catholic church has continued to push alternative proposals – the latest being the “two-operator” model, which would mean the Catholic Cemeteries Board Ltd (CCB) would maintain its hold on the cemeteries currently run by the CMCT.

The Catholic Cemeteries Board member Danny Casey, a management consultant and a former adviser to Cardinal George Pell, who spent two years in Rome between 2014 and 2016 helping Pell overhaul the Vatican finances, is just one of those leading the charge.

Also on the Catholic Cemeteries Board is the former attorney general Greg Smith, a staunch Catholic.

They have brought in the heavy-hitters of the lobbying world to assist: Michael Photios, the ex-Liberal politician and former convener of the moderates, and one of Sydney’s best-connected spin doctors, Tim Allerton.

In June, when Pavey threatened to appoint an administrator to the CMCT, the trust responded with a threat of an injunction.

Pavey has now been effectively sidelined and the former deputy premier, John Barilaro, has been chairing meetings with stakeholders.

Dandan has continued to push the OneCrown model and sought legal advice about whether the Catholic proposal offends against the direct dealing prohibitions. The Catholics have responded with their own legal advice, from Geoffrey Watson SC, saying that it is within the rules.

“It’s not about if the Catholics will do a bad job or good job,” Dandan says. “That’s not the question. This responsibility, logically, pragmatically needs to remain within the hands of government.”

The Greek Orthodox and Jewish communities also have a stake in the outcome.

The NSW Jewish Board of Deputies says it just wants a sustainable long-term solution that will clear the way for work on new cemeteries to start.

“We don’t want winners and losers,” the board’s chief executive, Darren Bark, says. “We are focusing on the community side of this and it’s the results that matter. Experience should also be taken into account.”

It is understood the Jewish community, which requires a much smaller number of burial sites, has secured an agreement for sites for the next 25 years.

The CMCT is operating under extensions to its legislation. The latest extension runs out on 30 December.

“We are committed to finding a solution that gives the people of NSW access to affordable, faith-appropriate burial services,” Pavey says.

“Ongoing consultation regarding the future operating model for metropolitan crown cemeteries has and will be conducted in accordance with all necessary probity protocols, including, where relevant, the Investment NSW direct dealing guidelines, the government’s unsolicited proposals process and the Icac guidelines for direct dealing,” she said.