The New South Wales treasurer, Dominic Perrottet, has emerged as the man most likely to take over as the state’s premier following Gladys Berejiklian’s bombshell resignation last week.

The treasurer has been working hard on building a profile in recent months – perhaps in the hope of the premier’s job becoming vacant – but despite serving in the NSW government ministry since 2014, for many voters, Perrottet is a largely unknown quantity.

So who is the would-be premier of Australia’s largest state?

A member of the NSW Liberal party’s right wing, Perrottet first made a name for himself as a University of Sydney student through his vocal support of the Howard-era voluntary student unionism reforms. He was heavily involved in student politics and was a president of the NSW Young Liberals.

In the lead up to the 2011 election which saw the Coalition win government in NSW for the first time in 16 years, Perrottet won preselection with the support of the ultra-conservative Liberal party powerbroker David Clarke. That early mentorship helped cement his reputation as a conservative warrior.

Many of his colleagues say that view of Perrottet lacks nuance, and that his handling of the economy during the Covid-19 pandemic is evidence the would-be premier is not an ideologue.

But he has been vocal in prosecuting the conservative cause on a number of social and political issues, describing the ABC as “a mouthpiece for Left of centre views”, and criticising some climate change policies as a “gratuitous waste” of money.

Perrottet has been a key member of the NSW government’s so-called crisis cabinet, which has overseen the state’s response to the Covid-19 pandemic.

But while he has signed off on all of the decisions – including the almost four-month lockdown Sydney has been placed under during its second-wave Covid outbreak – the treasurer has consistently been reported to have been in favour of fewer restrictions.

In July, he reportedly opposed an extension of the lockdown, as well as suggesting to the state’s chief health officer, Kerry Chant, that she take a pay cut if Sydney was unnecessarily locked down in response to the pandemic (he told the AFR he had no recollection of this comment when asked).

During his career Perrottet has sent mixed signals on climate change. During a speech to the conservative Centre for Ideas in 2015, Perrottet lashed what he described as the “gratuitous waste” in the former federal Labor government’s spending on climate change abatement policies, mocking the “almost religious devotion of the political Left to climate change”.

Those comments – along with a social media post from 2016 in which he wrote that “if you question man-made climate change, you are not a sceptic” – have been circulated widely by his political opponents in the days since Berejiklian’s resignation.

When that video surfaced two years ago, Perrottet did not shy away from the comments, but also stressed that he had always “believed in the science of climate change”. He has also been part of a government which has promised to cut the state’s emissions in half this decade.

In the same 2015 speech, Perrottet placed partial blame for rising divorce and declining fertility on the welfare system.

“While the decline in birth rates is multi­causal, there is no doubt the meddling hand of big government is once again at work,” he told the Centre for Independent studies.

“Countries with large pension systems tend to struggle with fertility. 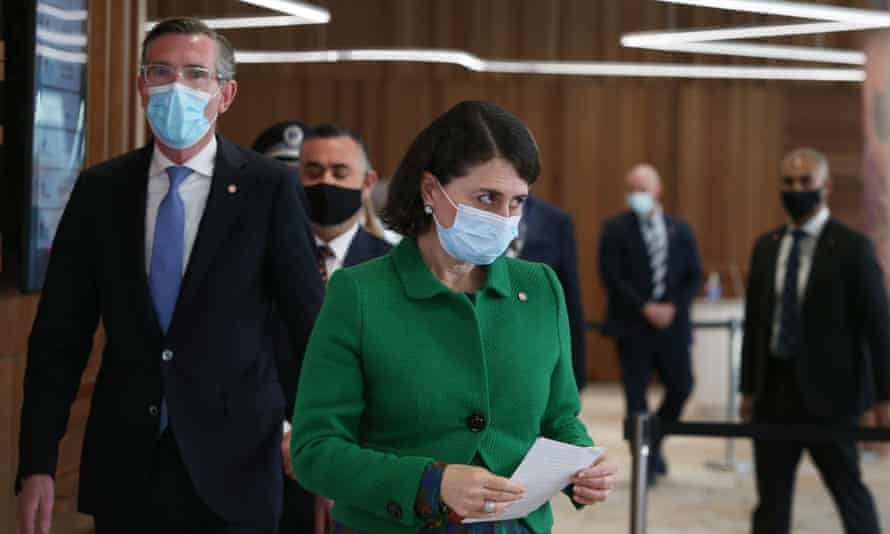 “In essence, the welfare state was acting as a substitute for the family, crowding ­out its formation, and increasing rates of divorce.”

The speech, made when he was finance minister, cited US politician Daniel Moynihan’s view that “marriage was penalised and single parenthood subsidised” by the welfare system, pointing to the western Sydney suburb of Mount Druitt as an example of what he called a “tangle of pathologies”.

“Delinquency, dysfunction, crime and family breakdown. And with the same devastating effects,” he said.

“The well-intended, but ham-fisted intervention into social policy by governments is having very real economic consequences.”

But during the pandemic, Perrottet has also pushed economic support for individuals and businesses. In July, after Sydney had entered a second lockdown due to an outbreak of Covid-19, Perrottet publicly called for the prime minister Scott Morrison to reintroduce jobkeeper payments.

“People are in danger of slipping through the cracks particularly those on income support that don’t qualify for the current disaster payments,” he said at the time.

He was key in pushing for the introduction of the jobsaver program, which includes employment subsidies for lockdown-affected businesses, as well as rent relief incentives, payroll tax reductions, deferrals and small business grants.

Much has been made of Perrottet’s religion. Raised a Catholic, he attended the Roman Catholic school Redfield College in Dural, which has some links to the conservative Opus Dei order.

Perrottet is not a member of Opus Dei, but has been open about his faith: “I think having a Christian faith is part of who I am and inspires me to make a difference wherever I go,” he said last year.

In 2019 Perrottet was the most senior member of the NSW government to oppose the decriminalisation of abortion in the state.

In the lead up to the vote, Perrottet told the Daily Telegraph he could not support a law that, he said, would stop “the beating heart of an unborn child”.

“While late-term abortions may be rare, that doesn’t necessarily make them right,” he said in the interview.

During the debate in parliament – before the bill eventually passed – he said supporters of abortion decriminalisation were “on the wrong side of history”.

However, in the debate he also acknowledged “not everyone is lucky enough to be in my circumstances”.

“Every day there are women out there who fall pregnant in difficult and sometimes impossible conditions of poverty, abuse, neglect and violence,” he said in the speech.

“I can understand why many of them in that situation would want to consider ending their pregnancies. But our first response as a community should be to help, not to harm, and to comfort, value and support both mother and child.”

Much has been made of a 2016 Facebook post following the election of US president Donald Trump, in which Perrottet welcomed his win as “a victory for people who have been taken for granted by the elites”.

“If you support stronger borders, you are not a racist,” he wrote.

“If you want a plebiscite on same-sex marriage, you are not a homophobe.”

But in a speech later that year in which he called for a “conservative spring”, Perrottet also articulated what he said was the failure of the mainstream political parties to stop the rise of Trump’s and other populists. In the case of the US Republicans, he said the party’s embrace of an “elite big business agenda” had “shut out their base” and did not respond to the growing disillusionment around them”.

“Here, we are in real danger of forgetting the forgotten people ourselves and we cannot make that mistake. There is and always will be a centre-right vote in this country.

“That doesn’t mean the Liberal Party will always be it’s natural home. This is not something I want to see happen. But just like the Republicans, we are vulnerable to disruption if we do not reflect the concerns of our base and represent its ideas.

When John Howard endorsed Perrottet over the weekend, the former prime minister said part of his support for the treasurer was based on his “commitment to economic reform”.

As NSW treasurer, Perrottet has pushed a number of economic reforms including changes to stamp duty taxes on home purchases which would introduce an opt-in property tax, as well as pushing a national debate about the need for GST reform.

But his time as treasurer has not been without controversy. A series of investigations into the $60bn workers’ compensation system icare found it had underpaid up to 52,000 injured workers by up to $80m in compensation.

Perrottet has said the insurer was working to address underpayments, which he said were less extensive than the investigation suggested, and icare has previously said the “recently publicised issues of past practice don’t reflect the way icare aspires to deliver services and work is underway to address this on multiple fronts”.