In a voice quivering with fear and exhaustion, Sara pleaded down the phone: “Please, get us out of here. The situation is very bad, we are trapped in a hell.”

For the past four days, Sara, who asked for her real name not to be used, has waited with her family among the thousands of people outside the gates of Kabul airport, desperately trying to board a US evacuation flight.

In the past few days, she said she had seen more than 15 people, including children, shot before her eyes, witnessed her uncle beaten brutally by Taliban fighters and had her nights on the hard street outside the airport gates interrupted by crowd surges and the panic-inducing crack of gunfire.

The crowds were packed in so tightly it was hard to breathe, and people had been trampled to death, she said, adding that the putrid stench of rubbish was getting worse by the day. They had run out of food and water. “My mental state is completely broken,” said Sara.

Sara and her four family members have all been issued US visas for evacuation from Afghanistan and received instructions in a letter from the US consul to go directly to Camp Sullivan, the US military base at Kabul airport, on 18 August. They were told to be prepared to wait hours, and bring bedding with them. But when they arrived on Wednesday, they found thousands blocking the entrance, and all the gates closed. They have not opened for them, and there has been no further information.

US soldiers stand guard behind barbed wire as Afghans sit on a roadside near the military part of the airport in Kabul. Photograph: Wakil Kohsar/AFP/Getty Images

“No one is allowed through, even with visas,” she said. “No one from the US is helping us. No one is telling us which gate to go to – we don’t even know when the US flights are leaving. There is violence everywhere but every gate we go to is closed and no one gives us any information or shows any mercy.”

Sara described how all around them, camped outside the airport gates, were many families with US visas, US passports or green cards, none able to reach an evacuation flight or get any information about their fate, their lives in the hands of Taliban soldiers who surround the airport. “It’s so scary here. There’s horror in everyone’s eyes,” she said.

Since the fall of Kabul last Sunday, the desperate scenes around the capital’s airport have become the defining images of the first week of Taliban rule. Thousands of people, many without papers, have continued to throng to the airport in a desperate attempt to flee. People have clutched onto plane wheels on the tarmac as aircraft took off, or fell to their deaths as stowaways. Babies and toddlers were passed over the shut airport gates to US soldiers on the other side, so desperate were Afghans for their children to escape the country.

On Friday, the US president, Joe Biden, pledged that the US would “provide safe evacuation for our Afghan allies, partners, and Afghans who might be targeted because of their association with the United States”. However, the scale of the ongoing chaos and dogged mishandling of the US evacuations at Kabul airport have cast doubt on that promise for many on the ground. 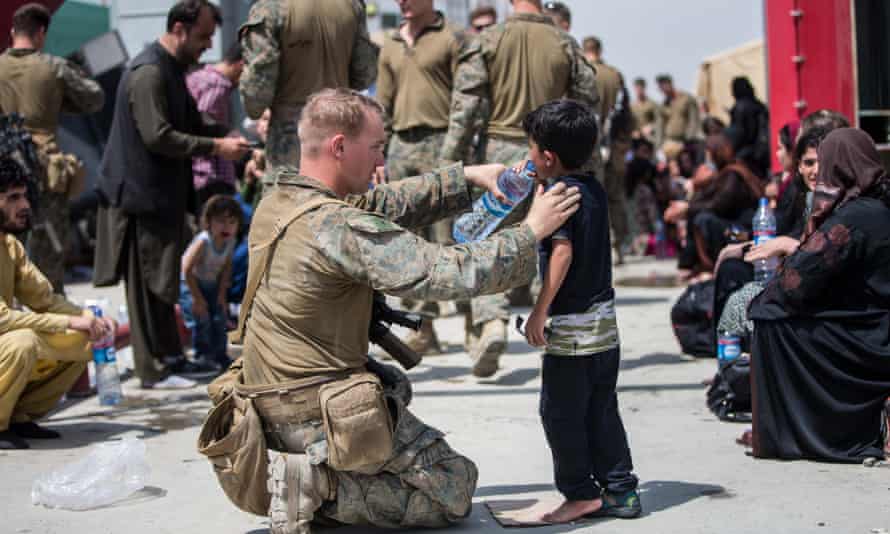 There is no coherent system for the evacuations, and in the absence of information, the few who have managed to make it past Taliban checkpoints to get to the airport have remained for days, despite the volatile situation making it a highly dangerous place to be.

Taliban soldiers have been firing into the air and reportedly into the crowds. At least 15 people have been officially confirmed dead at the airport, but those at the scene said the number was much higher.

A family of Afghans who have had residency in the US since 2019, and had only returned to Kabul to briefly see family, were among those unable even to reach the airport gates, despite their visas. With a young son just 11 years old and a 14-year-old daughter, they had made an attempt to get to the US gates on Tuesday but the son was hit with shrapnel and they retreated.

“The US have told them they can be evacuated, but only if they can get through an airport gate,” said a close friend of the family based in the US. “But every day they have gone to the airport it’s been so crowded and violent, it’s not been possible to get the family through without a huge risk to their lives. The gates have not been opening.”

Evacuation flights are departing, but slowly. On Friday, a US defence official said about 5,700 people, including about 250 Americans, were flown out of Kabul. But many of those stuck in Kabul with valid US visas have no idea how to get on a flight. The US have admitted they have no figure for the exact number of people who need evacuating.

Sara said the need for her family to be evacuated was urgent. With reports of the Taliban having compiled a “blacklist” of people and going door to door to find those who had collaborated with the US, Nato and western organisations, her family feared they too would be hunted: one relative had worked for the previous government regime in Kabul, others had been women’s rights activists. Sara herself is university educated.

The advice Sara’s family were given on Friday by a US government helpline was to remain at the airport and wait. “But it’s not safe for us here, the violence is increasing,” she said on Friday. Overnight the violence at the airport got even worse, and her relative was so badly injured when he was badly beaten with a rifle by a Taliban fighters that by Saturday morning they had to flee back home. “We don’t know what to do now,” she said.