The 20-year western mission to Afghanistan collapsed in a single dramatic day as Taliban gunmen poured into the capital, Kabul, on Sunday to seize back control of the country.

Amid scenes of panic, the Afghan president Ashraf Ghani fled the country and the US ambassador was evacuated to Kabul airport, abandoning the American embassy as diplomats frantically sought to destroy sensitive material before being airlifted out to safety.

Even before the Taliban announced plans to proclaim a new Islamic Emirate of Afghanistan, it was clear that a second era of its rule had effectively begun. The group started the day so confident of victory that its fighters surrounded the capital, then ordered them to stay outside the city and wait.

“Our forces are not entering Kabul city. We want a peaceful transfer of power,” said spokesman Suhail Shaheen. But with surrender apparently inevitable, Afghan government forces melted away, looting broke out, and hours later the Taliban claimed their men were needed to restore order.

So they moved in not as fighters but as policemen, presenting themselves as a government in waiting. By evening the Taliban had seized Afghanistan’s historic seat of power, expected to be used to declare new Islamic Emirate, more than two decades after the group had established its first one.

Outside, the city held its breath. The streets were mostly deserted, but the approach to the airport was crammed with people desperate to flee, and a steady rota of helicopters filled the sky.

In deeply humiliating scenes for the Biden administration, less than a month before the 20th anniversary of the 9/11 attacks on America, smoke spiralled from the embassy compound as staff hastily destroyed documents, before a final group took down the stars and stripes flag and headed to the airport by military helicopter.

People had raced home to destroy evidence of western or government links. Women without burqas searched for shops where they could buy them. Even hospitals were closed, with at least one desperate woman forced to give birth at home, with a doctor she begged to attend. 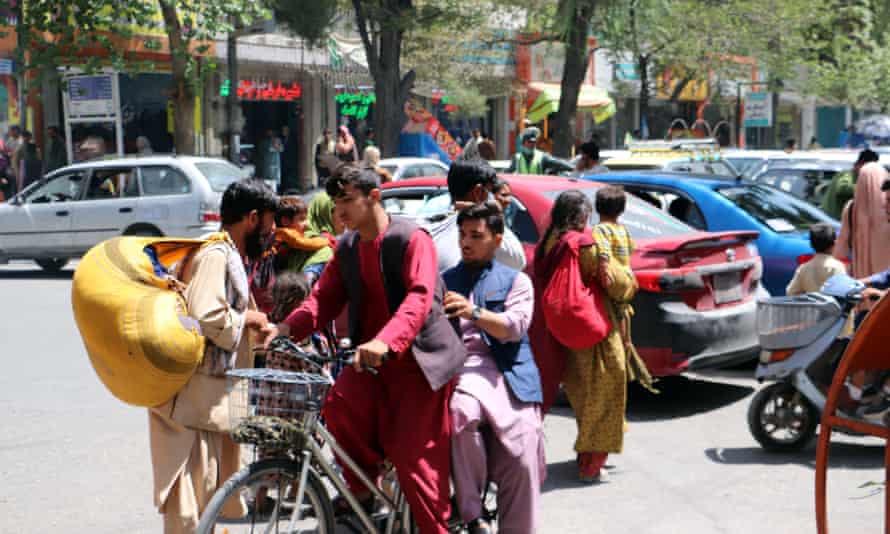 In parks and other open areas, people who had fled the Taliban advance in other parts of Afghanistan huddled in tents, fearful of a future they had tried and failed to escape. The United Nations refugee agency says more than 550,000 people in Afghanistan have left their homes due to the conflict since the start of this year.

Shaheen, the Taliban spokesman, has promised “amnesty” for those who worked for the now-fallen government, or with western nations, inviting them – though probably only the men – to serve under Taliban rule. “We once again invite them all to come and serve the nation and the country,” he said.

But it was an offer viewed with scepticism by many. In areas seized by the group there have been credible reports of reprisal killings, execution of surrendering soldiers, and women forced from their jobs at gunpoint, barred from education and forced into marriage by militants.

The remnants of the Afghan government travelled to Doha in Qatar to meet the Taliban in a bid to win assurances on a peaceful transfer of power, treatment of refugees and a promise of a ban on reprisals.

A US mandate that once aimed to rebuild Afghanistan had been reduced to trying to get all staff, and Afghan allies who had made the sometimes random cut, out of the country before a full Taliban takeover.

All other western embassies were already operating only out of the airport, at the insistence of the US. Their buildings across town stood largely empty, although diplomats for Russia, Pakistan, Iran and other countries that had not been part of the Nato mission remained in their compounds.

The exodus of those who could get out began early on Sunday after the insurgents captured the eastern city of Jalalabad, the last major centre held by the government, and the nearby border crossing with Pakistan.

By evening, Ghani was reportedly in Tajikistan. In a post on Facebook, Ghani said he had left the country to avoid bloodshed and clashes with the Taliban that would endanger millions of residents of Kabul. “The Taliban have made it to remove me,” he said. “They are here to attack all Kabul and the people of Kabul. In order to avoid the bleeding flood, I thought it was best to get out.”

Abdullah Abdullah, chief peace envoy of the collapsing government who has flown to Doha for negotiations, confirmed his departure from office and country. “The former president of Afghanistan left Afghanistan, leaving the country in this difficult situation,” he said. “God should hold him accountable.” 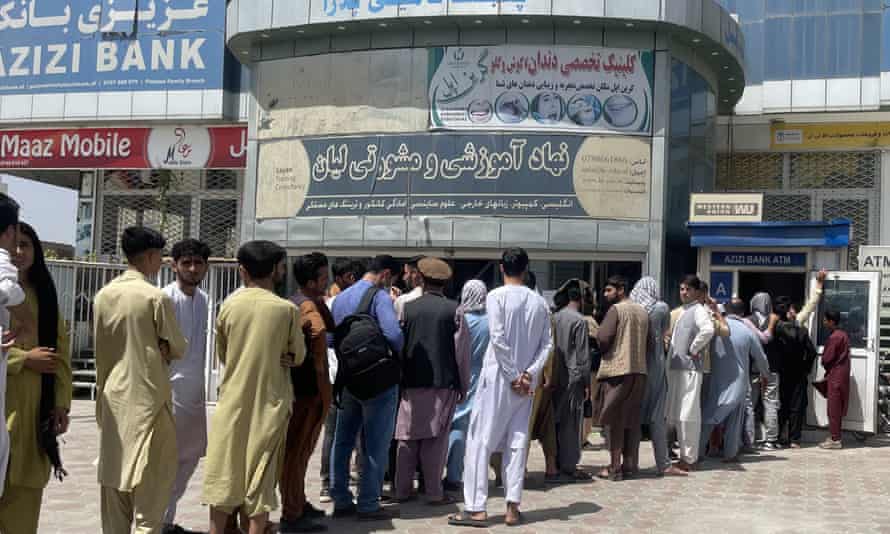 People queuing to withdraw money from a bank in Kabul on Sunday. Photograph: Anadolu Agency/Getty Images

Former president Hamid Karzai, in contrast, shared a video of him with his daughters, promising to stay in Kabul. He is part of a newly formed coordination council of Afghan leaders, which will meet with the Taliban and manage the transfer of power.

There was anger in the capital about the flight of a man who just a day earlier had been on national TV, promising to reorganise the army. “Ghani sold the country to the Taliban. I trusted him and voted for him but he is a failed leader,” said civil servant Karima Jamili.

But as the Taliban approached there had been fears of street-to-street fighting, a reprisal of the brutal civil war that ripped Afghanistan apart in the 1990s and reduced Kabul to ruins. So some welcomed his departure, despite trepidation about what would come next.

“Imagine if he fought against the Taliban, how many lives would be taken and how many innocent civilians would be killed?” said Hadia, a university student. “Considering that all provinces are under the control of the Taliban now it was the only way to decrease violence temporarily.

The Taliban’s almost bloodless seizure of the capital came after a lightning 11-day offensive on cities across Afghanistan. They had already seized most of rural Afghanistan along with key border crossings in a campaign that began in May, and this month they moved on urban areas nationwide in force, splintering and demoralising Afghan forces.

On Friday they captured the second and third largest cities, southern Kandahar and western Herat, and on Saturday the northern stronghold of Mazar-i-Sharif fell.

It then seemed a question of if, rather than when, Taliban would take Kabul but even so the speed of Sunday’s collapse was stunning. A US intelligence estimate just last week had said Kabul could hold out for at least three months.

It came almost exactly two decades after an international coalition led by Washington and London triumphantly toppled the Taliban in December 2001, seemingly consigning their caliphate to history.

Both in the UK and the US politicians tried to cast their long mission as an anti-terror one that would continue. UK prime minister Boris Johnson, asked about the situation in Afghanistan, said in a TV interview: “It’s very important that the west collectively should work together to get over to that new government, be it by the Taliban or anybody else: nobody wants Afghanistan once again to be a breeding ground for terror.”

But the west for years also laid out an explicit mission to support democracy and human rights, and most of those gains are expected to be swept away. The Taliban have always been clear that they are fighting for an austere interpretation of Islam, which includes particularly severe restrictions on women and girls.

Over years of peace talks brokered by the US, Taliban negotiators have promised to respect women’s rights under Islam, but refused to be drawn on details. And in areas they control women already have limited education, work and freedom of movement.

In Kabul, shops had started erasing photos of women in wedding dresses and women were bracing for a very different life. “I have felt very sad today, it was unbelievable for me that the Taliban were back in Kabul,” said Hawa. “They will not respect our freedom.”

Erykah Badu apologises for being “terrible guest” at Obama party