The first time the Taliban took Kabul, 25 years ago they tortured and killed former President Mohammad Najibullah, dragged his body behind a truck through the streets, then hung it from a lamp-post.

Last week, with Kabul surrounded and a second victory almost inevitable, the Taliban ordered their troops to hold back from entering the city, to ensure a peaceful transfer of power. When they did march in, it was to a soundtrack of their commanders offering an “amnesty” for anyone who had opposed them over the last two decades.

They promised this so many times in the week that followed that at one point, asked again about the commitment to bury the past, a spokesman snapped at journalists: “Do you [want an] amnesty statement to be issued every day?”

Last Tuesday brought the extraordinary spectacle of the Taliban’s spokesman Zabiullah Mujahid taking to the stage at the briefing room of a purpose-built Government Media and Information Office. The previous week, when they were still insurgents, the group had assassinated its director.

A man who had not shown his face for two decades was accepting questions from the assembled Afghan and international media, broadcast live around the world, with no filters or restrictions.

His talking points were clear. The amnesty (again), and a commitment that aimed to address western governments’ most abiding fears that Afghanistan would not revert to hosting groups that planned terror attacks aimed at the west.

Foreign aid organisations were urged to stay, and for women there was the promise they would enjoy their rights “within the limits of Islam”, although he sidestepped further questions on what those limits might be. Mujahid sounded as though he represented a different group from the secretive, isolated fighters who swept to power and formed a pariah government at the end of the last century. Then they forced women out of education and most work, ordered them to wear the burqa and brought in punishments including amputation and stoning.

Now he was taking questions from a female journalist wearing just a headscarf on her head. Yet for all Mujahid’s smoothing words, at the airport just 15 minutes’ drive away, crowds were still mobbing the gates, so frightened of their new leaders they wanted to leave with little more than the clothes on their backs.

The Taliban have for decades targeted not only the military and police, but government officials, journalists, human rights workers and others whose vision of Afghanistan differs from theirs.

So there is a broad section of people across the country who might be covered by that “amnesty” offer but are now living in real fear for their lives.

They knew the Taliban’s long track record, and had seen reports from areas they had captured in recent weeks and months, heard from relatives in cities that fell a few days earlier, about atrocities, intimidation, sharp curbs on women’s rights.

In May there was a mass execution of soldiers as they tried to surrender in the north, captured on video. In the south the next month, Taliban militants carried out door-to-door searches and reprisal killings. For years now in rural areas controlled by the Taliban, many girls’ schools were ordered to end lessons at the age of 12, and women were expected to wear the burqa.

When they took over cities more recently some universities were closed to women, others reopened but with classes segregated by gender. Gunmen ordered women home from their work in banks, saying a male relative could replace them. In some southern provinces, including Ghazni, music was banned last week, Afghan media reported.

After Mujahid’s press conference, some Iran experts drew a parallel between conciliatory statements made by Ayatollah Khomeini before he came to power, particularly on women’s rights, and the Taliban’s current messaging. Those promises were not kept.

Iran or Saudi Arabia might in fact be models for the Taliban, regimes where the leadership claims to be running a state on religious principles, with personal rights and freedoms heavily curbed. A senior Taliban leader last week bluntly ruled out any form of democracy. 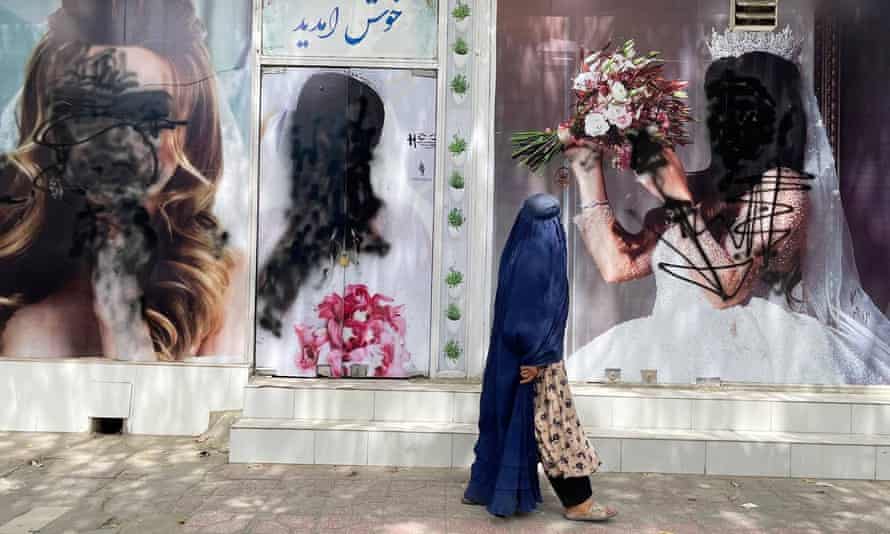 “If you ask the question can [the west] deal with a government that uses harsh punishments, that is something very difficult,” said Bette Dam, who studies the group and has written a biography of their founder Mullah Mohammad Omar.

“The Taliban say: Saudi does the same, sits in the UN, and this is what we wants as well.”

Eager for international recognition of their new state, something their old iteration of the Islamic Emirate never achieved, and with the eyes of the world on them, there is a strong incentive to present a moderate image of restraint.

Even so, as they settled into control of Kabul, the sense of threat within the city grew. Women who worked for the state broadcaster were told they no longer had a job. Some were attacked for not covering up enough. There were searches on homes in the city, with some people reporting relatives taken away, and beatings.

From outside Kabul, where there is far less scrutiny by foreign media, came news that Taliban gunmen had killed the relative of a journalist after they couldn’t find him at home.

Amnesty International documented a massacre of men from the largely Shia Hazara minority, long targeted by the Taliban.

Another menacing sign that moderation could be more for temporary show than for the long term was reported by the New York Times at a protest in Kabul. Gunmen policing a group of young Afghan women and men, who were waving the flag of the fallen Islamic Republic, warned them “you guys are free, only for 20 days”.

As the UK economy bounces back, do we sceptics need to say we got it wrong? | Will Hutton