The Taliban has declared that Afghanistan is under their control and the war is over after insurgents stormed the presidential palace in Kabul and President Ashraf Ghani fled the country.

Despite two decades of US military presence in Afghanistan, and a war that cost over a trillion dollars, Taliban insurgents arrived at the gates of Kabul on Sunday and took the capital with little resistance.

“Today is a great day for the Afghan people and the mujahideen [Taliban],” said Taliban spokesman Mohammad Naeem. “They have witnessed the fruits of their efforts and their sacrifices for 20 years. Thanks to God, the war is over in the country.”

The fall of Kabul to the Taliban had followed weeks of fighting between insurgents and Afghan forces across Afghanistan after the swift pull out of US forces in July. In recent weeks, key cities and regions across the country had fallen to the Taliban at unprecedented speed, and the capture of Kabul is seen to effectively seal their control of Afghanistan.

Afghan leaders have created a coordination council to meet with the Taliban and manage the transfer of the power.

Naeem emphasised that the Taliban wanted a peaceful transition of power and did not want to rule the country in isolation. He said they respected womens’ rights and freedom for minorities under sharia law. “We ask all countries and entities to sit with us to settle any issues,” he said.

Taliban fighters had been ordered to not harm any civilians or property as they entered Kabul and were seen taking up posts across the capital previously occupied by police and Afghan security forces. “The Islamic Emirates ordered its forces to enter the areas of Kabul city from which the enemy has left because there is risk of theft and robbery,” said Zabiullah Mujahid, a Taliban spokesperson, on Twitter.

President Ghani flew out of the country on Sunday night, stating that he wanted to avoid any more bloodshed. “If I had stayed, countless countrymen would have been martyred and Kabul city would have been ruined,” he wrote in a post on Facebook. The Taliban are expected to proclaim a new Islamic Emirate of Afghanistan in the coming days.

Despite the Taliban’s claims to want peace for Afghanistan, many Afghans fear the Taliban will return to past cruel practices in their imposition of sharia, or Islamic religious law. Their previous rule over Afghanistan from 1996 to 2001 saw women banned from schools and workplaces and forced to cover up entirely if they left the house, while archaic punishments such as stoning, whipping and hanging were enforced on those who violated the strict religious laws.

In some regions recently captured by the Taliban, women have already been prevented from attending schools and universities and banned from leaving the house without a male escort.

Panic and chaos gripped Kabul in the wake of the news that the capital had fallen to Taliban insurgents, and a curfew was imposed on the city on Sunday night. The airport was mobbed with thousands of people desperately trying to escape and by Sunday evening they had flooded onto the runway, halting air traffic.

The US admitted it was not in complete control of the airport and advised citizens to avoid the airport on Sunday.

“We are completing a series of steps to secure the Hamid Karzai international airport to enable the safe departure of US and allied personnel,” the Pentagon and State Department said in a joint statement early on Monday. 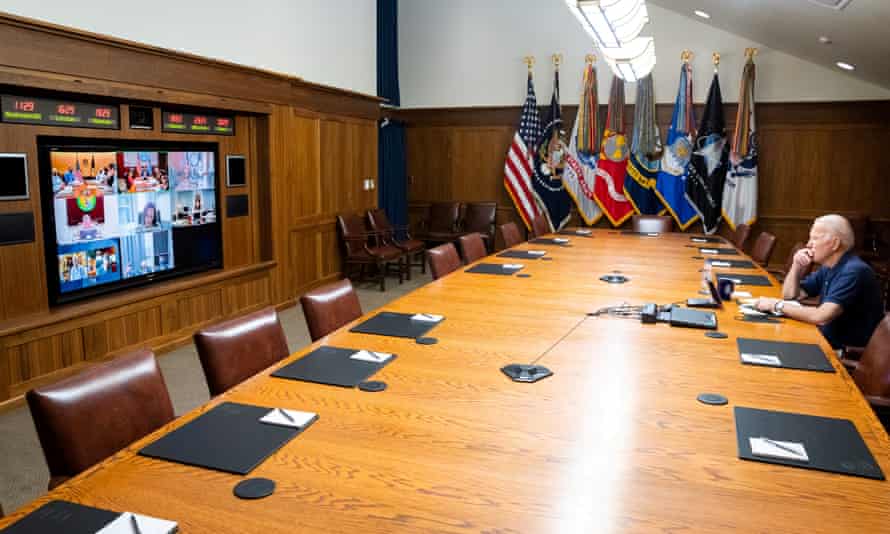 US president Joe Biden during a meeting with vice president Kamala Harris, their security team and senior officials to obtain updates on the draw down of civilian personnel in Afghanistan. Photograph: Twitter @WhiteHouse/Reuters

In deeply humiliating scenes for the Biden administration, less than a month before the 20th anniversary of the 9/11 attacks on America, smoke spiralled from the embassy compound as staff hastily destroyed documents, before a final group headed to the airport by military helicopter. The US is due to send another 1,000 troops directly to Kabul in coming days in an attempt to execute the safe withdrawal of US nationals and Afghan support staff.

By Monday morning a US official said the majority of western diplomatic staff, including US ambassador Ross Wilson, had left Kabul and that the airport perimeter had been secured. The American flag was also lowered and removed from the embassy compound.

As night fell across Kabul, roads were clogged with traffic and there were reports of looting and explosions in areas across the city, while messages spread across social media advising people to stay indoors.

The Wazir Akbar Khan embassy district was deserted with almost all diplomats and their families either flown out of the city or at the airport awaiting a flight. “It strange to sit hear and see empty streets, no more busy diplomatic convoys, big cars with guns mounted,” Gul Mohammed Hakim, one the city’s ubiquitous naan bread makers who has a shop in the area, told Reuters.

Hakim said he was already preparing his family for strict Taliban rule. “My first concern was to grow my beard and how to grow it fast. I also checked with my wife if there were enough burqas for her and the girls,” he said.

The UN said the security council would meet on Monday to discuss Afghanistan. The UN secretary general, Antonio Guterres, urged the Taliban and all parties to “exercise restraint” and said the rights of women and girls, who suffered under the previous Taliban regime, must be protected.

The United States was among 65 nations who released a joint statement urging the Taliban to let Afghans leave the country, warning of accountability for any abuses.

“The United States joins the international community in affirming that Afghans and international citizens who wish to depart must be allowed to do so,” the secretary of state, Antony Blinken, wrote on Twitter.

“Those in positions of power and authority across Afghanistan bear responsibility – and accountability – for the protection of human life.”

Mullah Abdul Ghani Baradar, the Taliban’s chief negotiator who has been in peace negotiations with the Afghan government in Doha, Qatar since last year, was among those who expressed surprise at how quickly the country had fallen under Taliban control. “There was no expectation that we would achieve victory in this war,” he said in an online video.