In April 2020, near the start of the global pandemic, Felix Kartte was working 14-hour shifts as an EU policy officer, struggling to monitor a barrage of coronavirus-linked disinformation.

Articles claiming that the pandemic was a hoax, that it was caused by 5G, that it could be cured by hydroxychloroquine or alternative medicine were going viral across the continent – part of a global phenomenon the World Health Organization warned was becoming an “infodemic.” Kartte and colleagues in StratCom, the EU diplomatic service’s strategic communications division, could detect what they say were patterns of Covid-denier and anti-vaxxer disinformation linked to Russia and to a lesser extent China, being disseminated in several languages across Europe.

They scrambled to flag the bogus reports on their monitoring database and wrote up internal reports. But problems arose when they produced a public assessment which said China was pushing false narratives to deflect any blame for the pandemic. Believing the report to be finalised, Kartte was surprised when the office of Josep Borrell, the EU’s foreign policy chief, paused its release for rewrites. In the document that was eventually published the criticisms of China appeared to have been softened.

Kartte said he was “outraged”. “Our job was to inform EU citizens about attempts by authoritarian states to deceive and manipulate them,” he said. “I had always been convinced that our analyses should be as objective and transparent as possible.”

When the original was leaked, the department was accused of bowing to pressure from Beijing. Borrell, under questioning from MEPs, denied it and instead pointed the finger for unhelpful leaking at “a member of the staff”. While he used no names, many understood him to be referring to Monika Richter, a Czech analyst and one of the report’s co-authors.

The episode revealed deep tensions around attempts to stem a tide of fake information and conspiracy theories. More than a year on, the EU remains under fire for its failure to implement a credible response to disinformation, which has proved a huge threat to the global management of the pandemic, including by fuelling vaccine scepticism. The EU’s financial watchdog, the Court of Auditors, warned in June that Europe’s fragmented strategy on disinformation was being “outpaced” by emerging threats.

Kartte and Richter have both left the EU’s diplomatic service, but spoke to the Guardian, along with several serving and former EU officials. The picture that emerges is of a counter-propaganda effort hamstrung during the pandemic by a mandate focused almost entirely on Russia. It is a picture of a hardworking but understaffed disinformation unit embedded in bureaucratic structures too politically risk-averse to heed its findings and ill-equipped to combat a threat as vast as the one the bloc faced with Covid-19. This weakness, say experts, has enabled the spread of harmful anti-vax sentiment across Europe and the rise of domestic Covid-sceptic movements.

“The EU’s response … leaves an open field to anti-vax disinformation, fuels Covid-denier movements and sows distrust in public health authorities,” said Nathalie Vogel, a senior analyst at Kremlin Watch, which monitors Russian disinformation for the European Values Center for Security Policy. “All this is partly self-inflicted.”

A protester with an anti-vaccine placard at a demonstration of Covid-deniers in Barcelona in July 2021. Photograph: Paco Freire/SOPA Images/REX/Shutterstock

‘The Kremlin would be laughing their asses off’

From an open-plan office at the HQ of the EU’s diplomatic service in Brussels, a team of analysts scours the internet for published stories aimed at influencing European public opinion. They fact-check any that raise suspicions. Material identified as false or misleading is recorded on a publicly available database. This operation dates back to 2015 when after the occupation of Crimea by pro-Russian forces, the EU set up a unit within StratCom dedicated to countering Russian propaganda. Its flagship tool is called EU vs Disinfo, a project aimed at documenting and publicly debunking conspiracy theories and misleading content from sources linked to Russia. Its analysts write for a website and send out a weekly newsletter in English and Russian.

Jakub Kalensky, who was the EU’s top disinformation analyst between 2015 and 2018, helped design the tool. Kalensky recalls working largely alone at first, putting in long hours and weekend shifts assisted only by a network of unpaid volunteers around Europe. “They were all working for us for free since we had no money,” he said. The team were encountering dozens of disinformation stories a day. Only when fears about Russian hackers attempting to influence elections grew did the team receive its first dedicated EU funding. After the 2018 poisoning of Sergei and Yulia Skripal in Salisbury it was expanded. In the same year, the EU created a Rapid Alert System, a tool that EU member states could use to share insights on disinformation.

The taskforce now employs 16 people and has an annual budget of several million euros. Six people work solely on the EU vs Disinfo project, all of them relatively young, with backgrounds in journalism, communication or diplomacy. But the size and reach of the operation are dwarfed by the budgets believed to be available to those using disinformation to undermine the EU. Russian state-backed media reportedly have a combined annual budget of about $2.8bn. A campaign aimed at promoting the Sputnik V vaccine and undermining public trust in the European Medicines Agency for example, accelerated in the spring of 2021 with the combined involvement of Russian state authorities, state companies and state mass media, the EU said in April. The EU taskforce’s meagre resources however, mean that it can only hope to capture “the tip of the iceberg,” Kalensky said.

“We had a running joke that if the Kremlin could see how many people are working and under what conditions, they would be laughing their asses off,” said Monika Richter. “It’s no mystery how small and poorly resourced the team is.” Until the pandemic, there was no monitoring of fake stories originating from within EU countries or linked to countries other than Russia. While China Global Television Network (CGTN), an English-language cable news channel controlled by the Chinese Communist party, is considering a Brussels expansion StratCom until recently had just two people working on Chinese disinformation.

The EU’s lead foreign affairs spokesperson Peter Stano said the mandate given to the taskforce by EU governments predated coronavirus when the main disinformation challenge was posed by Russia. He added: “The biggest number of disinformation cases – and the most harmful – relating to [the] pandemic [that] we observed and exposed, was from Russia-linked actors.”

Yet Borrell admitted in March of this year that the EU lacked the authority or resources to track the evolving threat from campaigns seeded during the pandemic which originated in China. He said “hybrid” tactics targeting public opinion and the EU’s critical infrastructure were a growing threat to the EU’s “democratic values”. Stano said that there are now three Mandarin speakers working in EU strategic communications and that more are being hired.

To some, criticism of the EU’s effort overlooks its constraints as a union whose ultimate decisions are made by 27 governments. Some of these governments have little appetite for confronting Moscow or exposing connections between external actors and homegrown spreaders of conspiracy theories about vaccines and lockdowns. “I think the question to ask is, what can the EU do,” Alexandre Alaphilippe, the head of EU DisinfoLab, an independent NGO said. “Sometimes, people are like, ‘Yeah, the EU should do this!’. But they don’t have the mandate, so [without it] they can’t transform themselves into something they’re not.” 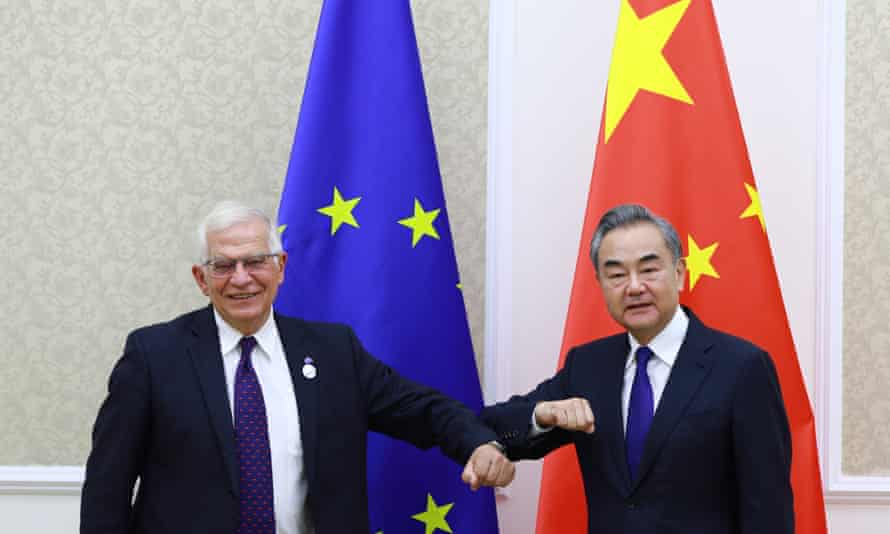 ‘We play chess but they are punching us in the face’

In the first week of April 2020, the US was reported to have seized a shipment of face masks in Thailand that were headed for Germany, and diverted them to the US. American officials immediately denounced the story as a lie. But at a time when urgently sourcing scarce supplies of PPE was a preoccupation for public health services German officials accused the Trump administration of “modern piracy”.

Vogel believes the EU’s failure to mount a robust and rapid pushback against a story which looked calculated to drive a wedge between the EU and the US, opened the infodemic’s flood-gates.

Baseless versions about masks being seized appeared in Italy, Germany, Greece and France and Vogel said the database mapped them spreading “like a virus”. But European institutions failed to react adequately. “What we have is people building up cases if you will – people who work very well, analysing sources in many languages. And then it goes nowhere”.

According to Richter, the EU has preferred to lean on social media platforms to remove false information. “The institution is extremely resistant to dealing with disinformation as a national security threat,” she said. “They want to depoliticise it and treat it as a technological, actor-agnostic problem that is removed from the question of authoritarian influence in Europe.”

Stano said this critique misinterprets the EU’s role which is part of a collective effort including social media platforms and member states. “The main task [for Brussels] is to expose the disinfo from open sources and we do it very transparently and visibly,” he said. “The battle is waged primarily in the individual countries, in their languages, in their national context.”

But in its June report the Court of Auditors accused EU governments of failing either to hold tech companies accountable or to do enough about the evidence the EU’s specialists were calling out. The EU vs Disinfo project had been “instrumental in raising awareness about Russian disinformation” but EU governments were not using the system to its full potential to see off the “grave threat” represented by malicious manipulation of European public opinion.

Former employees add that the taskforce was also undermined by officials who they claimed would rather tone down reports than risk diplomatic conflict. Richter claimed that EU vs Disinfo reports were often subject to political editing by senior EU officials, while other employees say they felt their work was “uncomfortable” for the EU. Stano denied that senior officials edit findings but said it was normal practice for drafts to be circulated before final versions are published.

Kalensky said responses from superiors were inconsistent. “Not all of the cases and incidents we were trying to highlight and raise alarm about got published,” he said.

Several sources suggested that rather than trying to fix EU vs Disinfo, the EU should fund civil society to do the job instead. “You don’t want this work to be done by a political entity that suffers from questions of democratic legitimacy,” said Richter.

Kalensky retains his faith in the EU taskforce and said the bloc should give it more resources and expand its mandate to track Chinese campaigns. “We are fighting a war where we don’t know how many tanks and how many airplanes the enemy has,” he said.

The EU should be doing much more to confront and punish the perpetrators of disinformation that the taskforce documents, he added.

“The trouble is that all of Brussels is designed to be non-controversial,” Kalensky said. “Sometimes I say, we would like to be playing chess, whereas they are already punching us in the face.”

This article was supported by a grant from the Investigative Journalism for Europe (IJ4EU) fund.