On the 15th day of Ghost Month, when the gates to hell are believed to open and spirits walk the earth, Taoist masters are invited to the Zhupu Altar, a massive temple built on a hillside in Keelung, northern Taiwan. The masters hold a ceremony to assist the spirits of those who died without family or friends to pray for them, known as “hungry ghosts” but commonly referred to as good brothers and sisters to avoid offence.

Ghost Month is marked across east Asia, including Hong Kong, southern China, Indonesia and Malaysia. In Taiwan, Keelung is a significant site, with a history of violent disputes during the Qing dynasty, and it hosts the island’s biggest events. The ceremonies often draw tens of thousands of onlookers from afar, but these are Covid times.

After a 15-minute hike to the gate, visitors are greeted with barriers blocking the entrance and police asking cars to leave. An officer says: “This year the ceremony is not open for humans!”

Asked who is inside, he replies: “They are the staff and the good brothers”.

Across the world, religions that have built their observance around mass gatherings have had to rewrite traditions to avoid becoming superspreader events.

The pandemic has brought extra significance to traditions revering those passed. Taiwan lost more than 800 people in the last three months, with untold more among the large diaspora community in countries hit far harder by the virus.

“One of the really interesting aspects of thinking about ghosts and ghostliness this past year and a half for me has been the two temporalities of being in the US with family back in Taiwan,” said Eileen Chengyin Chow, a professor in Asian and Middle Eastern Studies at Duke University, who lives between the US and Taiwan, which recorded no cases for more than 250 days last year.

“While I thoroughly thrilled at being in a space that felt safe and untouched and life seemed to go on as usual, it felt unaccountably sad, actually. Because the US at that point had been many, many months of grief and absence.”

Pilgrims burn and release a water lantern into the sea during the Hungry Ghost Festival in Keelung, Taiwan. The lanterns are placed in the water and lit on fire guiding spirits to reincarnation. Photograph: Billy HC Kwok/Getty Images

Taiwan is coming to the end of its worst Covid-19 outbreak but many – including those at the Keelung temples – are not ready yet. On Sunday, Zhupu Altar put on a lightshow, lit firecrackers, and prayed for the gods, the ghosts, and an end to the pandemic, but those still mortal had to watch online.

In Taoist, Buddhist and east Asian folklore, Ghost Month refers to the seventh month of the lunar calendar when the gates of the underworld open, and spirits are freed to search for food, or perhaps for innocent lives who can take their place and allow them to move on.

Across Taiwan, households prepared offerings of food, alcohol, candles, flowers, washbowls and towels, in prayer for their ancestors and gods, and to placate the hungry ghosts. The streets filled will smoke as they burned paper money – gold for the gods and silver for the ghosts – in small metal drums.

There are lists of taboos: don’t swim at night just in case drowned ghosts drag you under the water, don’t whistle or hang your laundry at night, don’t turn around to someone calling your name. It’s also a bad month to buy a new car or house, but many will tell you that if you’re not superstitious it’s a great time to get a deal. 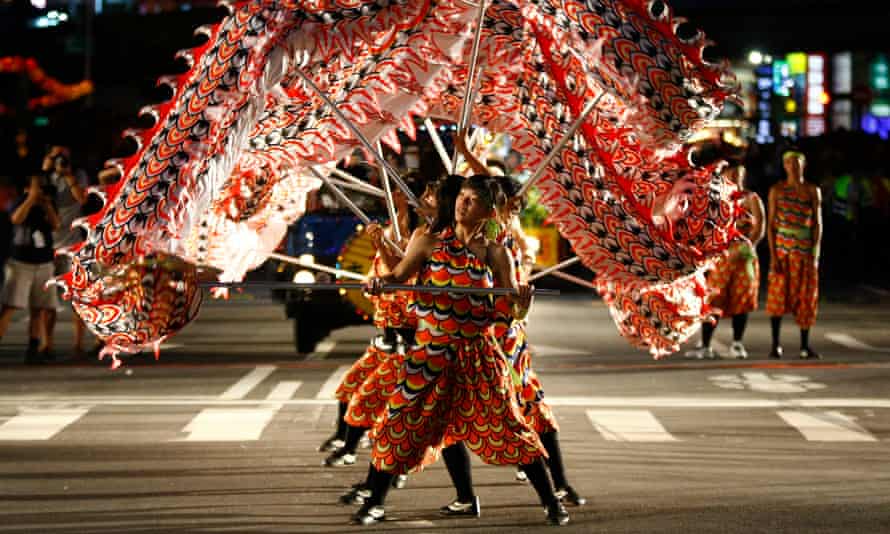 The traditions adapt to the times – in Singapore, residents reported people burning paper vaccines for their ancestors. In Taiwan, far more people seemed to be ignoring the taboo against swimming, perhaps because a summer-long Covid ban on swimming venues had only just lifted.

“The last generation believes in those taboos but not much anymore today,” Zhang Ru Song, the head of Keelung’s Qingan Temple, says. “The last generation is more sensitive to the old and traditional god and ghosts concepts. Nowadays, we only remind each other to try to avoid water activities.”

Generally, people use this time to remember their ancestors and remember where did they come from, Zhang says. “And help those ghosts who have no one to pray to them, in order to keep everyone safe.”

Some suspicions are still common among younger generations. A recent survey of Taiwan office workers found a third of respondents avoid working overtime during Ghost Month. The poll found 40% of office workers had reported strange encounters in the late hours. More than 70% reported “eerie sounds” from office corners, while others said they heard footsteps, saw windows open on their own and elevators arrive on their floor without being called, or heard toilets flushing in an empty bathroom.

In Keelung, Zhang says there were fewer households praying this year. The events were much simpler with communities sending representatives to participate on their behalf, to reduce the Covid risk.

“We still kept the tradition and held the events, and their sincere hearts were still praying the same.”

My husband convinced me to go swinging, now I’m hooked but he won’t do it again