Thousands of Afghans and foreign nationals have surged on to the tarmac at Kabul airport seeking a place on a flight out of the country, amid chaotic scenes that unfolded as the Taliban took control of the city.

With the Taliban installed in the presidential palace and the elected president having fled the country, access to Hamid Karzai airport, five kilometres from the centre of the capital, was possible only through Taliban checkpoints.

The US, UK, Germany, Canada and a host of other coalition nations are all seeking to evacuate their nationals from the country. The southern – civilian – side of the airport came under fire on Sunday, and on Monday morning, there were reports US troops had fired into the air to disperse surging crowds.

Foreign embassies warned their nationals and Afghan citizens it was not safe to travel to the airport, and only to go there if instructed. Embassy staff are being helicoptered to the military side of the airport, which has been secured by US soldiers.

Videos from the airport showed people pouring into the terminal building, and scenes of dozens being pulled into the back of a C-17A military aircraft on the tarmac.

Thousands of people – including parents carrying young children – are seen surging towards planes on the airfield. US Humvees are also on the ground at the airport. In one video a woman calls out “look at the state of the people of Afghanistan”.

Awful, chaotic scenes at Hamid Karzai International Airport. People scrambling and no where to go. Woman says “look at the state of the people of Afghanistan” #Kabul pic.twitter.com/5Ohe1c81uB

As day broke in Afghanistan, video appeared to show thousands of Afghan men, women, and children streaming towards grounded civilian planes on the tarmac, with hundreds trying to find a way onboard.

Gunfire at the airport had forced some passengers into shelters as they awaited flights out of the country.

Massouma Tajik, a 22-year-old data analyst, was among hundreds of Afghans waiting anxiously in the Kabul airport to board an evacuation flight. “I see people crying, they are not sure whether their flight will happen or not. Neither am I,” she said by phone, panic in her voice.

A Nato official said all commercial flights had been suspended and only military aircraft were able to operate.

US military officials were overseeing air traffic control at the field, which was still being run by Afghan nationals. An additional 1,000 US troops flown into the country – bringing the number of newly deployed to 6,000 – were helping secure the airfield. On Monday morning the US announced it had secured the perimeter of the airport.

There were unconfirmed reports – supported by video – that commercial planes had been overwhelmed by people boarding, and some people have had to be taken off flights because the planes were overweight and could not take off.

Throughout Sunday, Kabul was seized by a rising panic.

As helicopters ferried US nationals the five kilometres from the US embassy to the airport, smoke rose from near the American compound as staff destroyed sensitive documents, and the US flag was lowered and removed.

France, Germany and the Netherlands, all Nato members, have said they were puling their diplomats out of their embassies.

Fearful that the Taliban could reimpose the brutal rule they enforced before 2001, Afghans sought ways out of the country, lining up at cash machines to withdraw their life savings.

Those who had fled to the presumed safety of the capital from Taliban-controlled regions remained camped in parks and open spaces throughout the city.

On Sunday, the Taliban captured the eastern city of Jalalabad without resistance from government forces, giving them control of one of the main highways into landlocked Afghanistan from Pakistan.

They also took the nearby Torkham border post with Pakistan, leaving Kabul airport as the only way out of Afghanistan still under government control.

The US embassy in Kabul warned the situation in Afghanistan’s captured capital was unpredictable.

“The security situation in Kabul is changing quickly, including at the airport,” the embassy said in a security update. “There are reports of the airport taking fire; therefore we are instructing US citizens to shelter in place.” Almost all US embassy staff are now at the airport. 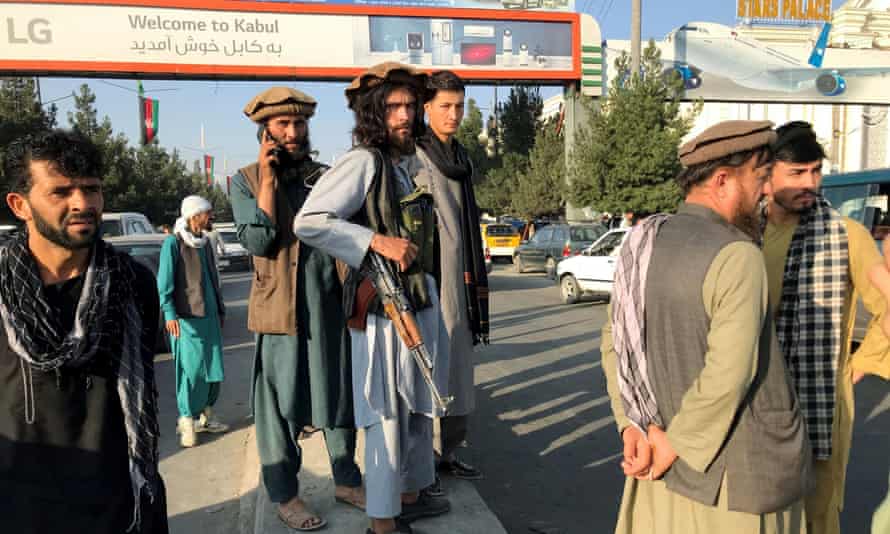 Taliban fighters have entered the presidential palace and declared the war over: the elected president Ashraf Ghani fled the country ahead of the insurgents’ entry – reportedly to Tashkent – saying he wanted to “prevent a flood of bloodshed”.

“The Taliban have won with the judgment of their swords and guns, and are now responsible for the honor, property and self-preservation of their countrymen,” Ghani said.

In a joint statement the US departments of defence and state said American citizens and locally employed staff of the US mission in Kabul will be evacuated along with “other particularly vulnerable Afghan nationals” in coming days.

“And we will accelerate the evacuation of thousands of Afghans eligible for US Special Immigrant Visas, nearly 2,000 of whom have already arrived in the United States over the past two weeks. For all categories, Afghans who have cleared security screening will continue to be transferred directly to the United States. And we will find additional locations for those yet to be screened.”

Asked if the evacuation was evocative of the chaos of the US departure from Vietnam in 1975, US secretary of state Antony Blinken said: “Let’s take a step back. This is manifestly not Saigon.”

But in a sign of the chaotic and desperate situation, the British ambassador Sir Laurie Bristow was reported to be at Hamid Karzai airport helping the handful of diplomats still in the country process the applications of Afghan nationals who had worked alongside British forces now trying to get out of the country. 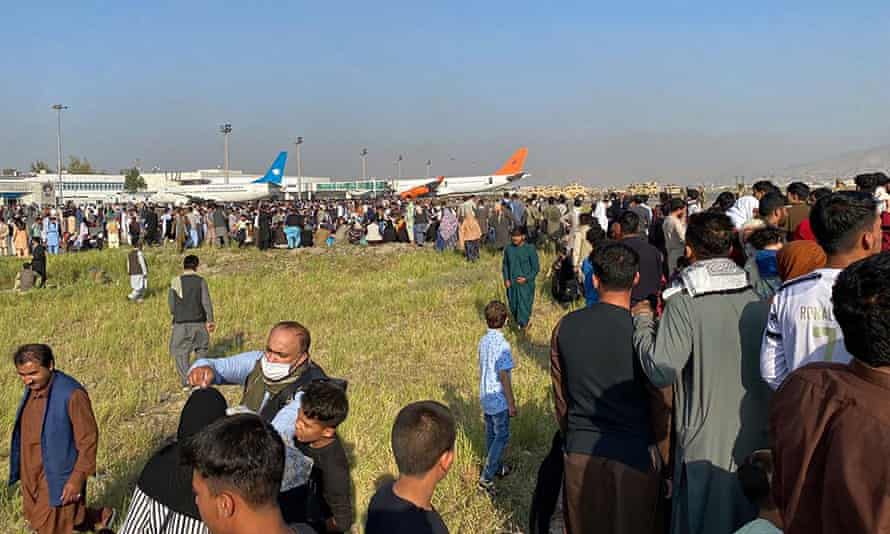 Afghan passengers crowd at the airport as they wait to leave from Kabul Photograph: Shakib Rahmani/AFP/Getty Images

After the Foreign Office initially said 34 Chevening scholars who were set to fly to the UK to study at British universities could not come because their visas could not be processed at the Kabul embassy, prime minister Boris Johnson personally intervened saying: “we do want to make sure they are able to come and so we are doing whatever we can to accelerate their visas to get them over as well”.

Taliban spokesperson Mohammad Naeem said the Taliban had achieved “what we were seeking, which is the freedom of our country and the independence of our people”.

“We will not allow anyone to use our lands to target anyone, and we do not want to harm others,” Naeem said. The group won’t interfere in the affairs of others and, in return, won’t allow interference in their affairs, he said.

“We do not think that foreign forces will repeat their failed experience in Afghanistan once again.”

Morrison says troops died ‘for a great cause’ in Afghanistan. To quote a grieving father, that’s bullshit | Paul Daley