When Zaki Anwari scaled the fence of Kabul airport, he was determined to escape. The 17-year-old footballer with the Afghan national youth team had taken a break from studying maths for his exams to accompany his brother as he tried to catch a flight. Zaki had always told his family he was not interested in going abroad, unless he could return to Afghanistan.

But the Taliban takeover had changed things. Zaki did not have a passport but, as night fell on Kabul after the Taliban took control of the city, he told his brother Zakir that he wanted to leave. Zakir did his best to talk him out of it, but he would not let go of the idea.

Zaki was one of at least a dozen men who clambered onboard the outside of a US air force C-17 Globemaster transport plane as it taxied on the runway the following day. None of them made it to the plane’s destination, the Al Udeid airbase in Qatar.

Panicked men run alongside the US transport plane on the runway at Kabul airport in a desperate attempt to get onboard. Photograph: AP

The plane had landed a short while earlier to deliver equipment to US forces. The night before, another aircraft had evacuated 823 people fleeing the Taliban takeover of Afghanistan, and Zaki joined the new arrivals on the airport runway, hoping for a similar escape.

Monday 16 August was clear and bright, and the young athlete was supposed to be guarding the family’s car with Zakir while their older brother, Naser, jostled among people outside the airport clutching documents to leave.

Just before 11am, Zaki called Ahmad, the only brother still at home, to tell him he had jumped over the perimeter wall around the airport. “I’m close to the airplane now, they’ll register our names after they put us in the plane, and then I’ll lose [the] phone signal. I’m going to throw my phone away,” he said.

Ahmad shouted at him to come home until Zaki hung up. Twenty minutes later, Zaki called his mother to speak to his sister, telling her that he felt he had a chance to board the plane, and asking her to pray for him. His mother put him on speaker to scream at him to come home, chiding him that he had no passport or travel documents.

Seeing the crowds rushing towards the plane, the crew decided that they had to take off. The hulking grey aircraft began taxiing as throngs of people ran alongside it. Amid the chaos, a small number climbed on to a wide fairing above the wheels and a smooth broad area above the wheel well.

Video shared by Asvaka, an Afghan news agency, shows the men smiling nervously and waving to others gathered next to the tarmac, with at least 12 onboard. Some waved excitedly, the wind whipping their hair as the plane picked up speed. Two jumped off and made a dash back into the crowd before the plane took off.

He just said goodbye to us like on any normal day when he went to work. He said nothing about the airport or travelPayenda Mohammad

Shocked bystanders looked up at the sky, some filming on their phones, as at least two bodies fell from the plane as it flew south over Kabul. Afghans commenting online drew comparisons to the “Falling Man”, photographed falling from the twin towers on 11 September 2001, a grim bookend to the US presence in Afghanistan. The men who fell were barely children, some not even born, when the US and its allies invaded Afghanistan 20 years earlier.

Fada Mohammad, 24 , was born into a world of civil war and Taliban rule four years before the US invasion in 2001. The young dentist had long dreamed of leaving, but lacked a plan or the financial means. His father, Payenda Mohammad, said Fada had been looking for ways to find money since getting married last year. 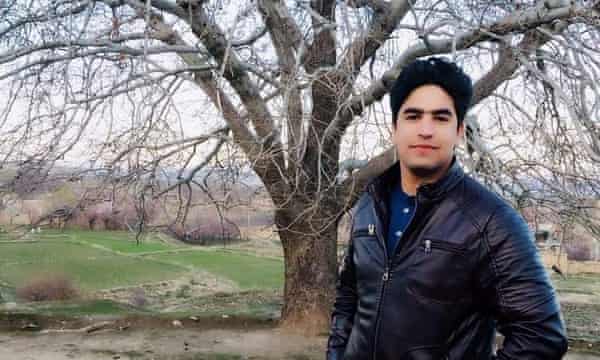 Fada Mohammad, a 24-year old dentist, was one of the men who fell from the plane as it left Kabul airport on 16 August. Photograph: Family Photo/Family photo

“Fada had talked about wanting to travel, but financially things were bad here. Anyone looking at the situation in this country would want to be elsewhere, and Fada was no different,” Payenda said. Fada was the family’s breadwinner, supporting 13 others.

Fada left as usual for work on the morning of 16 August. His wife and family had no idea he was heading to the airport. “He said goodbye to us just like any normal day, when he left for work at 8.30am,” said Payenda. “He didn’t say anything about the airport, or travel.”

Even in his grief, Ahmad tried to understand why Zaki clung to the plane. “He saw the panic, he saw the Taliban – anyone would be scared,” he said.

What happened next is the subject of an investigation by the US air force. Its spokeswoman, Ann Stefanek, said the plane was surrounded by civilians who had breached the airport walls before it could offload its cargo. “Faced with a rapidly deteriorating security situation around the aircraft, the C-17 crew decided to depart the airfield as quickly as possible,” she said. American helicopters flew in front of the plane to clear space on the runway to take off.

The official account and videos indicate that the pilot was either unable to see the men clinging to the plane after takeoff, or was unwilling to stop the plane. The flap the men had used to climb on to the wheel well folds under the aircraft as the landing gear are retracted. Those who did not fall were probably crushed to death.

“In addition to videos seen online and in press reports, human remains were discovered in the wheel well of the C-17 after it landed at Al Udeid air base, Qatar. The aircraft is currently impounded to provide time to collect the remains and inspect the aircraft before it is returned to flying status,” said Stefanek.

Authorities in Kabul maintain that the US crew could have acted differently. “Those men thought the pilot would stop and transfer them to the inside of the plane,” said an Afghan health ministry official, who tried to identify some of the men after they fell to their deaths. The official has not been named for his own safety.

One of the men fell inside the airport perimeter, while two more hit rooftops in a neighbourhood close to the airport. A resident who heard a body land on a roof described it as sounding “like a bomb”.

The Anwaris said that, not long after the plane had taken off, someone called Zaki’s sister from his phone to tell her they had found his body. The family believe Zaki was crushed under the wheels of the plane as it departed, or possibly in the landing gear as it retracted into the wheel well.

Fada’s wife grew concerned after her husband did not call as usual at 10am to say he’d arrived at work. “Then at 2pm, we got a call from a stranger asking if we know Fada Mohammad,” said Payenda. The stranger said they had found Fada’s body, and that he had been thrown from the aircraft. Payenda rushed to collect his son’s body.

The brother of another victim, 15-year-old Mateen, told the Pajhwok news agency that the family had been unable to find him after spotting Mateen in a video showing the group sitting on a tyre on the plane. “There were 21 men sitting on the plane, two jumped before it flew, yet we only saw 12 bodies in the hospital,” he said. “We didn’t hear from [Mateen], we couldn’t find his body – we went everywhere. The bodies fell in so many areas.”

The official, whose time at the health ministry predates the Taliban, said knowing precisely how many men died falling from the aircraft, and identifying them, became almost impossible in the aftermath of the fall of the government.

“Their bodies were so badly damaged by the fall, it was hard to identify them. There was no government to investigate the incident,” he said. “If you knew the Taliban, then you’d understand why the men did this.”