Every few days, after finishing his online college classes, Chai* prepares to join protests in Bangkok. He takes a bandana to cover his face, material to obscure his motorbike licence plate, a helmet, and often a ping pong bomb.

The home made device, in which stones are wrapped up with firework powder will either be thrown at police as a provocation or used as a distraction when he and his friends are being chased by officers.

“We don’t have a choice, we have to come out; my family is suffering,” says Chai, who is 19. As he speaks, the banging of fireworks and ping pong bombs echoes from a nearby underpass. Clouds of black smoke rise from burning tyres further along the roadside.

He is at Din Daeng intersection, the site of a leaderless uprising by teenagers calling for action on a host of issues ranging from democratic reforms to coronavirus. For more than one month, the area has turned into a battleground with nightly clashes taking place between young protesters, mostly students from vocational colleges and poorer neighbourhoods, and the police, who routinely fire rubber bullets and teargas.

Chai’s mother and father, a food seller and an electrician respectively, have both lost work because of the pandemic. Chai says he has also been forced to give up his part-time job because his college course has been moved online and now doesn’t finish until later in the day. He is training to be an electrician, but is on the brink of dropping out. One of his friends, who leans in to talk, has already done so. They are struggling to learn from home, and say there has been no support to cover the internet costs.

“Everything has culminated, everything has exploded now during Covid,” Chai says. The economic situation and the government’s management of public funding cannot be tolerated any longer.

Last year tens of thousands of young people took to the streets across Thailand to call for democratic reforms aimed at making the establishment more accountable and society more equal. The protests, led mostly by university students, argued that the power and wealth of the monarchy should be curbed, that prime minister Prayuth Chan-ocha, a former army general who first came to power in a coup should resign, and that the constitution, drafted by army appointees, should be reformed. The message was serious, but the rallies were peaceful, and often had a festive atmosphere, with playful protest art and even satirical dress. 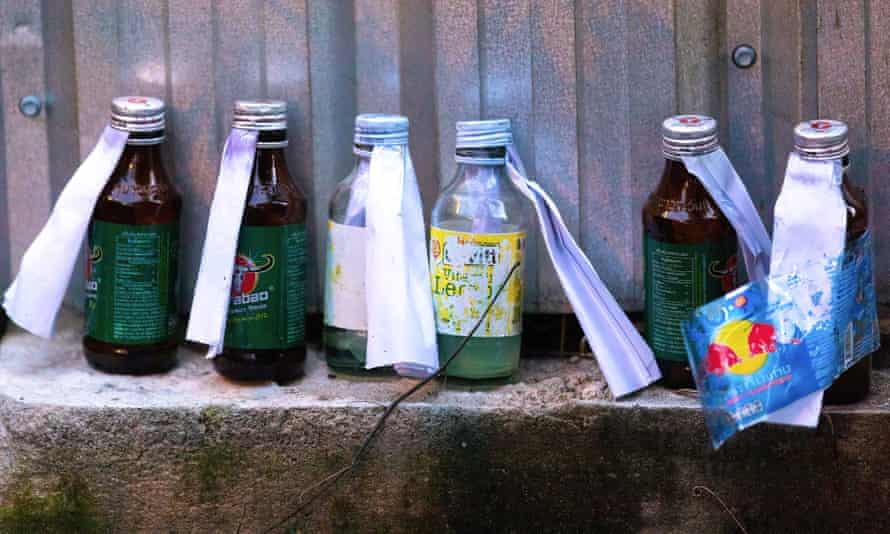 None of the protesters’ demands have been met.

Instead, more than 1,000 people face legal charges for political activities, including at least 132 for lese-majesty, which can lead to 15 years in prison. Key protest leaders have been repeatedly denied bail.

At Din Daeng, protesters say they have run out of patience. “It’s as if they look at us not like a citizen, it’s as if they see us as slaves,” says Chai’s friend, who is 17. Two of his family members, his aunt and uncle, died after becoming infected with Covid. “They don’t have connections, so they had to wait and wait [for a hospital space],” he says. One of them died at home, before getting proper treatment. Like Chai, his family are struggling financially. His mother used to work in a school canteen, but it has closed. She is selling street food instead, and making less money.

Though Thailand managed to contain Covid throughout 2020, it has experienced its most severe wave over recent months, after cases spread quickly through slum housing, factories and prisons. The vaccination process has been slow and chaotic. Those who could afford it resorted to flying abroad for vaccines; those who can’t are left to wait their turn. Chai’s father has been vaccinated, but his mother is yet to receive a jab.

Before Covid, vocational students were more likely to fight over college rivalries than stand shoulder-to-shoulder, say Chai and his friends. Now they are united in opposition to Prayuth. Before gathering, they scout to see where police checkpoints have been set up, and plan possible escape routes. Their motto is “come together, go back together”.

Their demands remain the same as those proposed by protesters last year. “If Prayuth would resign, maybe everything could be better,” says one of the teenagers.

Some criticise the protesters for engaging in clashes with the police, arguing they are causing trouble, risk undermining wider protests, or legitimising the use of force by the authorities.

While both protesters and police have sustained injuries, rights groups have warned that police force is excessive and indiscriminate. Earlier this month 13 organisations wrote to the prime minister to express concern about the police response. 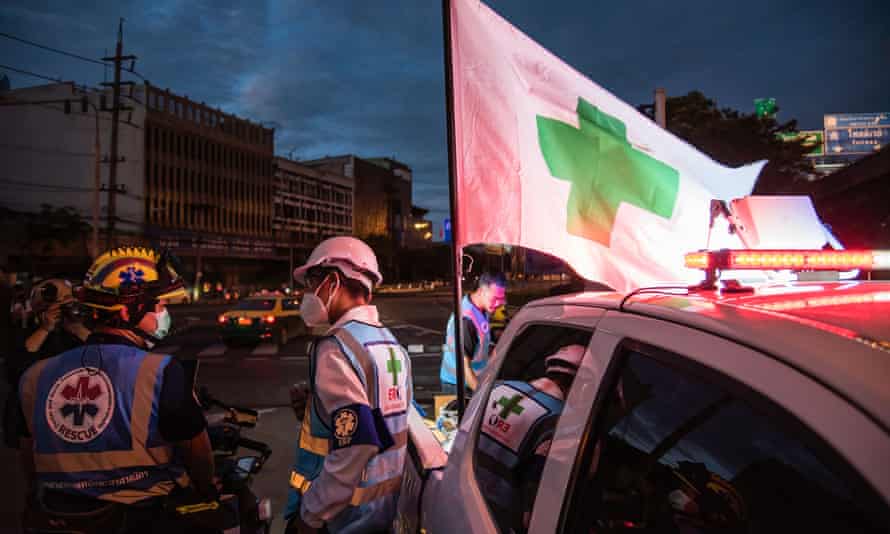 Videos circulated on social media appear to show police firing rubber bullets at protesters on motorbikes, including at close range. In one clip, a police van hits a protester, who falls to the floor, before driving off; police later said the van was being pursued by protesters. In a separate incident, three teenagers were shot with live ammunition in August, with one boy left in a coma.

The police say their use of force is in line with the law, and has denied using live ammunition.

‘Many of them lost their parents because of Covid’

Prajak Kongkirati, a professor in the department of political science at Thammasat University, says the confrontational tactics of protesters are driven by anger and frustration at the lack of reforms, the leaderless nature of gatherings, and, in some cases, a belief that by provoking the police they will “show how brutal the police and current regime is”.

“They see the police as part of the system that suppresses them and their family,” he says.

Attitudes towards Thailand’s youth protests, which have broken a deeply held taboo by calling for monarchy reform, are polarised. Protesters say some residents in Din Daeng have offered shelter and protected them from the police; others have apparently reported them to the authorities. Some are simply fed up with the noisy clashes, and consequent damage to properties.

Many sections of the Thai public, even if not approving of their tactics, are increasingly sympathetic, as more is known about the protesters and their backgrounds, Prajak says. “They are below 18 years old, some of them are only 13 or 14… Many of them lost their parents because of Covid, many of their parents lost their jobs, so they had to quit education,” he says. 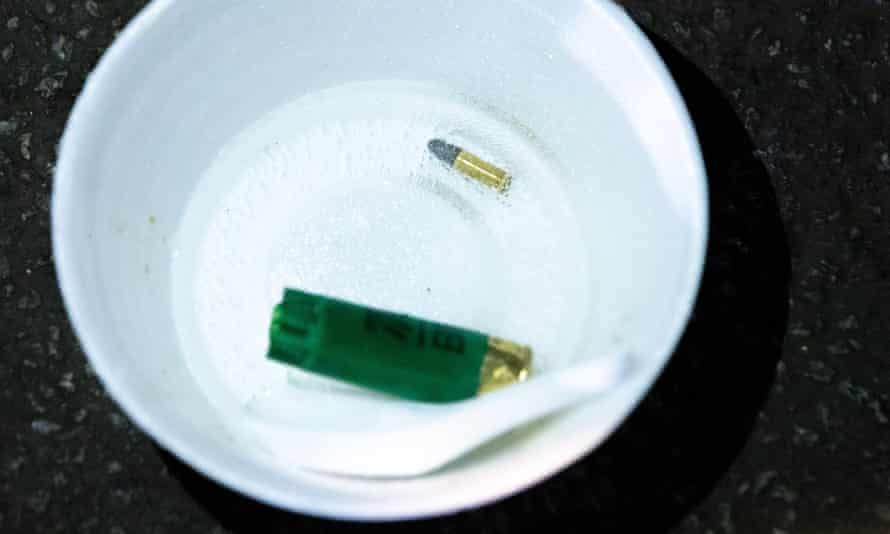 A 22mm round and a rubber bullet shell found by a protester. Photograph: Phobthum Yingpaiboonsuk/SOPA I/REX/Shutterstock

The Covid outbreak caused a lull in mass protests that gripped Thailand during 2020, but rallies have increased over recent weeks. Former red shirt leaders have led “car mobs”, with protesters gathering in their cars and on motorbikes, to reduce the risk of Covid. Even members of the elite, including Tanat Thanakitamnuay, previously an ultra-Royalist, have backed calls for political change. At a protest in August, he lost sight in his right eye after being hit by an object believed to be a tear gas canister.

Dr Punchada Sirivunnabood, a visiting fellow at Singapore’s ISEAS-Yusof Ishak Institute, says there is a “high potential for big protests after the Covid situation becomes better”.

The government, adds Prajak, faces a dilemma over whether to lift restrictions. The protests at Din Daeng remain small, but reopening the country could lead far larger numbers of young people to take to the streets. “Their ideology hasn’t changed, their commitment to political struggle hasn’t changed,” he says.

Chai says he will continue protesting until the government is dissolved. Police violence won’t deter him, or his friends. “It will even spark us to go out, we will get even more angry,” he says. “It’s going to be like this until Prayuth gets out.”

*Name has been changed to protect their identity