In locked-down New Zealand, life orbits around the 1pm briefing. As the home-bound nation digests its lunch, the director general of health, Ashley Bloomfield – frequently alongside prime minister Jacinda Ardern – takes the stage behind a socially distanced podium and updates the country.

In the midst of a Covid outbreak, those briefings occur almost every weekday. They are so clockwork-regular, so predictable in their essential structure, that certain sentences became memes: “Kia ora koutou katoa. There are X cases of Covid-19 in the community,” each begins. After the last outbreak, media outlet The Spinoff spliced together Bloomfield saying it 44 times.

“It became kind of a cultural phenomenon,” says science communication expert Rebecca Priestly. “We were getting information directly from the prime minister and from the director general of health and other representatives in a way that’s quite unusual.”

Over the past year, those briefings became a subject of study for researchers examining how political communication can fuel trust and mobilise populations. They are, researchers say, just part of the answer to why trust levels in New Zealand have remained high – even as in some countries trust in governments and other institutions has slumped.

This month, the government has had to lean into that trust again. After discovering one case of Covid-19 in the community on 17 August, the country went into a nationwide lockdown, with some of the strictest restrictions in the world. As of Monday, it had recorded 562 cases. It is New Zealand’s first major outbreak in more than a year, and is on track to become its largest. On Friday, Ardern said that Auckland, the country’s biggest city, was likely to stay in level 4 lockdown for at least two more weeks.

Wellington CBD, at 7am during Level 4 lockdown Photograph: Dave Lintott/REX/Shutterstock

And yet, restrictive as it may be, New Zealanders overwhelmingly back the government’s approach. Recent polling found the lockdown had support from 84% of the population. New Zealand’s embrace of elimination rankled some overseas commentators, who accused the country’s government of “nannying its population into isolation and quiescence”.

But experts say that trust and social capital could prove crucial to countries emerging from the pandemic – as well as boosting their chances of solving myriad other social problems.

‘An epidemic of misinformation’

Many countries’ trust in their governments has been sputtering for years. Last year in the UK, trust dropped to its lowest point in decades. In the US, it’s trended down for 60 years. The 2021 Edelman Trust Barometer diagnosed “an epidemic of misinformation and widespread mistrust of societal institutions and leaders around the world.”

In some countries, the Covid-19 pandemic cracked already fragile pillars further. A Pew Research study from last year found people in most advanced economies around the world, including 88% of Americans, believed their society was now more divided than before the pandemic. After brief boosts early in the pandemic – what Edelman researchers called the “spring trust bubble” – trust levels fell back by 15 percentage points in the UK, 11 in Canada, and six in the US.

In New Zealand, however, the opposite has been true. According to Pew, 75% of people there believed their society was more unified in 2020 than pre-Covid – the second-highest in the world, beaten only by Singapore. Researchers measuring New Zealand’s trust pre- and post-lockdown found the lockdown group reported higher trust in science, politicians and police, and higher levels of patriotism. 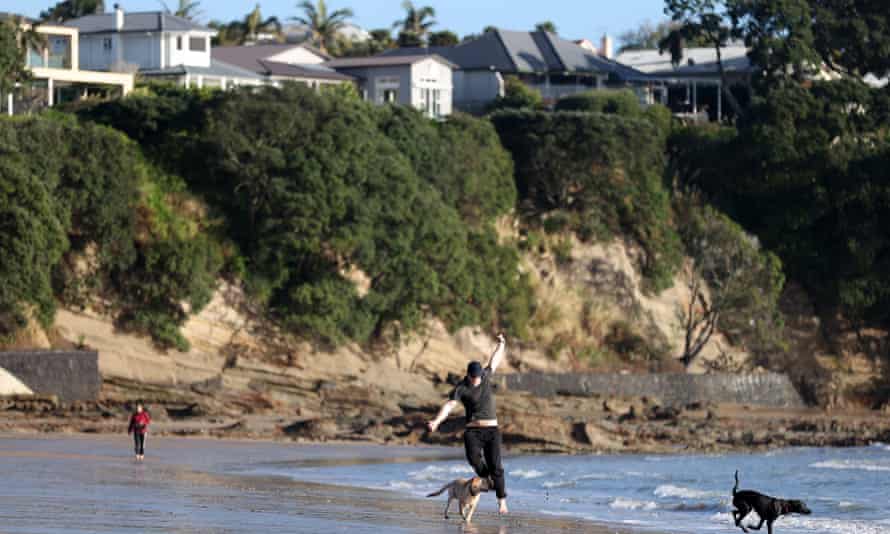 But local trust in government is not purely an offshoot of a highly successful Covid response. Victoria University researchers surveying trust levels in 2016 found New Zealand trust in government across a range of measures was low – sitting at 45%. As some countries became increasingly mistrustful, however, New Zealand bucked the trend.

When the survey was repeated in 2018, trust had leapt to 64%, nearly a 20 percentage point rise. “That’s a big upward shift that we hadn’t expected,” says Simon Chapple, co-author of the study and director of the Institute for Governance and Policy Studies. “It’s really quite astounding.” Trust skyrocketed again after the initial Covid-19 response, to 83%, then settled back in the high 60s.

Social scientists say the questions of social and political trust – how to get it, how to keep it, how it’s lost or maintained – can have crucial implications. People with higher levels of trust in government are far more willing to receive a vaccine, for example, Chapple says. But the implications also extend far beyond Covid.

“For any significant policy change, you typically need a significant community consensus that crosses political boundaries,” he says. Other huge challenges, such as the climate crisis, will require revolutions in behaviour. When people don’t trust their leaders, their institutions or each other, it’s much harder for them to solve the social problems that require huge collective action.

“There’s a version in the data of what social scientists call the Matthew effect,” Chapple says, referring to a passage in the gospel of Matthew: “‘To he that hath, shall be given.’ So high-trust institutions, trust in them increased. But low-trust institutions banged along at the same level, or fell slightly – there’s an increasing gap.’’ The same can apply to whole governments: it’s much easier to lose trust than to gain it, and easier to increase trust when you’re already well perceived.

It’s hard to find high-quality data on trust in government, and it can depend on a complex tangle of factors – economic performance, inequality, political personalities, social capital. After disasters, trust often jumps, but it’s not guaranteed. People facing a shared threat sometimes “rally around the flag” and put their trust in institutions and each other because they have few other options – but they can also respond with greater suspicion, developing conspiracy theories or scapegoats to blame.

Ardern’s communication has been heralded as a key part of taking New Zealanders along with her – not just during Covid, but in other crises, such as the Christchurch mosque attacks. After New Zealand’s first national lockdown, Priestly and researcher Alex Beattie ran language analysis of the 1pm briefings, coding hours of transcripts.

Over and over again, Priestly says, “the lockdown was framed as something that both the government and New Zealanders were responsible for”. That frame of collective responsibility, she says, helped transform the experience of lockdowns from an essentially disempowering, top-down experience, to a communal effort. “Very early on, Jacinda Ardern said, ‘as a government, we will do everything in our power to protect you. Now I’m asking you to do everything you can to protect all of us’,” Priestly says.

“Speaking directly to people about the impact their actions had, that was quite powerful.”

No appetite for culture wars

But while communication can help ease populations’ suspicions of their governments, trust is not just some vague sentiment, divorced from material circumstance. Over the past two years, it has been borne out by many New Zealanders’ life experience. The vast majority have not had to watch their families sicken or die of Covid-19. The public health system has not been overwhelmed. Droves have not found themselves unemployed or facing eviction. 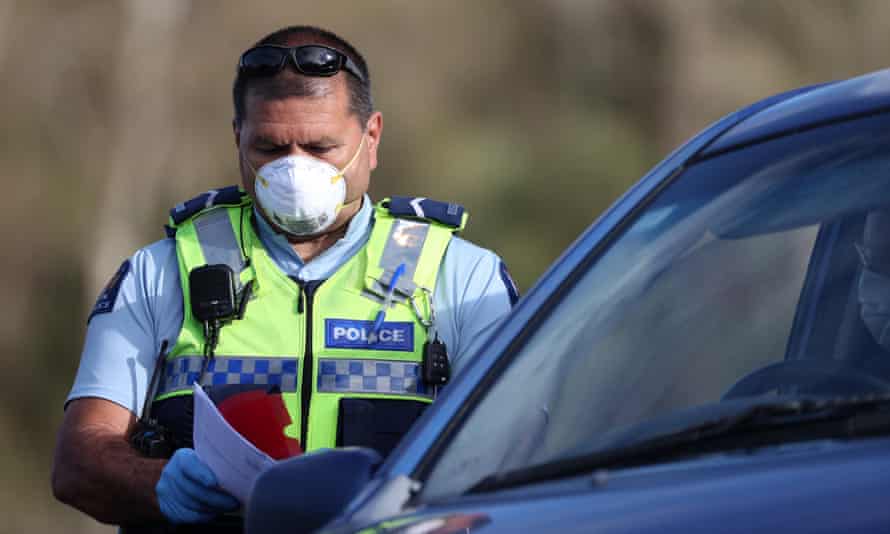 Trust in New Zealand is not a universal sentiment. Māori and Pacific communities are less likely to trust the government and other institutions such as the police. Photograph: Fiona Goodall/Getty Images

“In the case of New Zealand, one of the things that’s been cited especially in the Covid response was having that economic safety net there, and in other places that wasn’t forthcoming,” says the co-director of the Public Policy Institute, Lara Greaves.

She notes that it’s hard to get high-quality data, and trust in New Zealand is not a universal sentiment – Māori and Pacific communities are less likely to trust the government, and institutions such as the police. But Greaves says that New Zealand’s proportional political system means that, while parties might dabble in “culture war” rhetoric and divisions, they tend not to go all-out.

Trust “depends as well on the extent to which populism and this idea of commonsense regular people versus elites – whether that kind of ideology is present, and whether there are parties in the system that are bringing that ideology up a lot,” Greaves says. “We haven’t seen a political party – one that’s legitimately represented in parliament … really do that.”

Chapple adds: “We’ve escaped the worst of the culture wars that have created these schisms in the [United] States and the UK and Australia. Those culture wars have been very destructive of trust in one’s fellow citizens. They’re also very distracting – they encourage debate about issues that take attention away from fundamental things like how do we adapt to climate change … long-term existential problems get caught up in short-term noise.”

In New Zealand, political consensus has endured so far, with cross-party support for the country’s elimination strategy. There is no anti-mask brigade in parliament, and little political appetite for a snap reopening that could cost thousands of lives. As the current lockdown stretches into the next month, it remains to be seen how that trust will last.

“There are rational reasons why politicians have acted in that way in the US and UK – and they do get very short-term results,” Chapple says. “But there will be long-term costs, and other consequences.”