For more than a decade, Satya Naresh has been trying to persuade India’s men to stop a wedding custom that he sees as one of the country’s worst social evils.

He wants men to declare: “I don’t want dowry”. The line is the name of the website he set up in 2006 as part of his campaign. Naresh wants Indian men not to expect the money, motorbike, sofa, TV, iPhone, gold jewellery or fridge that a future wife is expected to come with.

Dowries have been illegal in India for 60 years, but the custom is entrenched. India records more than 8,000 “dowry deaths” each year; 20 women die each day through suicide or murder related to dowry demands. Dowries plunge poor families into debt and female foetuses are aborted because couples do not want a girl.

This country’s traditions go back centuries and it’s very hard to uproot them. Dowry is no differentSatya Naresh

“Everyone wants money. Everyone takes shortcuts. People are greedy,” says Naresh. “It is one of India’s most deeply rooted traditions. This country’s traditions go back centuries and it’s very hard to uproot them. Dowry is no different.”

Naresh, 50, a web designer in Hyderabad, lives with his parents. His two elder sisters were wed without dowries. His awareness of the issue started when he was studying commerce at university and he saw his friend’s despair over the belief that she would never find a husband because of her parents’ poverty. She later killed herself. Another friend vowed never to marry out of loathing for the custom.

At another friend’s wedding, Naresh saw the bride’s family in an anguished huddle. “At the last minute, the bridegroom had demanded another 10,000 rupees [£100] as dowry, or else he would call it off. The friend’s father didn’t have it. He had already given so much. My friends and I rallied around and collected the money and gave it to him and the marriage went ahead, but I was shocked at how easily my friend’s future could have been destroyed without that 10,000 rupees,” he says.

His website also hopes to bring together like-minded people who want to marry without a dowry. He says 50 couples have married after meeting on the site.

Relatives of a bride and groom at a family court in Mumbai. Indian weddings are often spectacular affairs lasting days, with hundreds and sometimes thousands of guests. Photograph: Indranil Mukherjee/AFP/Getty

Naresh is resolutely optimistic. “Women are better educated than ever before, they are working, some are independent. Women have a voice now. Some have the confidence to tell their father that if a prospective bridegroom demands a dowry, they won’t marry him. It’s a small start but it’s something,” he says.

He wants government action on the issue, pointing to India’s anti-tobacco campaign, in which every cigarette packet was stamped with a gruesome warning, vendors were banned from outside school gates, and cinemas screened anti-tobacco ads.

“Have you ever seen an anti-dowry poster anywhere?” he asks. In a country of India’s size, it is difficult for civil society groups to change attitudes nationwide without government backing.

“We have never had an energetic, determined effort to smash into people’s consciousness. We haven’t had a single TV series tackling dowry that is watched by the masses. Not a single Bollywood star has been enlisted to hammer home the point. It’s no good making dowry illegal without working to make it something Indians are ashamed of accepting,” he says.

The ostentatious weddings of the rich have not helped. If the wealthy held smaller weddings without dowry it could set a trend, says Naresh, which may make it easier for poorer families to resist pressure. 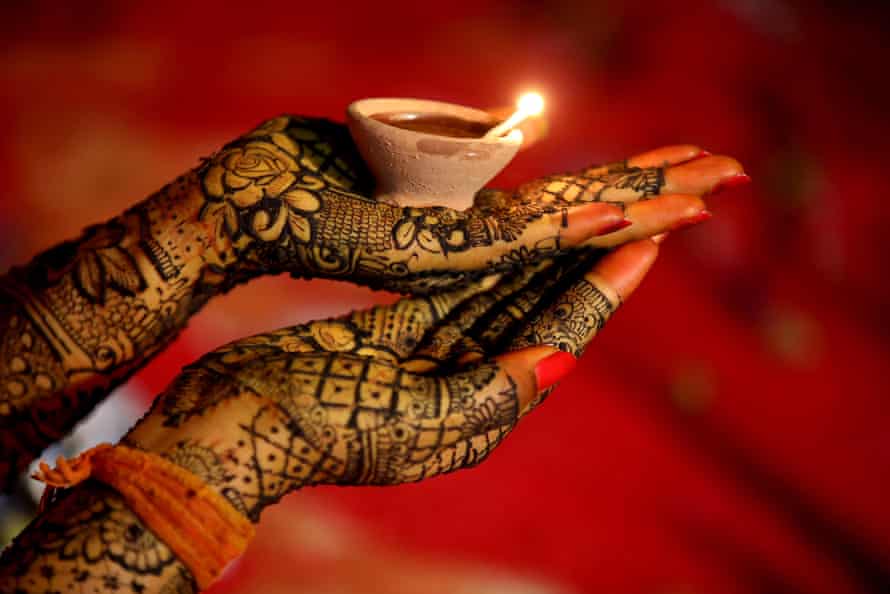 A bride performs a ceremony before her wedding in Bhopal. Dowries push poorer families into debt, which can escalate with the groom or his family demanding further payments. Photograph: Sanjeev Gupta/EPA

In Kerala, in the space of two days in June, three young women died over dowry issues – two are believed to have taken their own lives and one was allegedly murdered.

Naresh believes the deaths should trigger public outrage. A governor in Kerala is calling on university vice-chancellors to make students pledge not to seek or pay a dowry, or lose their degree.

“We have planted a seed. Give the tree time to grow. In time, I hope the canopy of this tree will cover all of India, and protect all its young women,” he says.

In the UK and Ireland, Samaritans can be contacted on 116 123 or email [email protected] or [email protected]. In the US, the National Suicide Prevention Lifeline is at 800-273-8255 or chat for support. You can also text HOME to 741741 to connect with a crisis text line counsellor. In Australia, the crisis support service Lifeline is 13 11 14. Other international helplines can be found at www.befrienders.org