A few months ago there were US bases all over Afghanistan where you could immerse yourself in Americana, buy Coke and Snickers bars from vending machines and watch live sport on TV.

Now the outpost has shrunk to one side of Kabul airport, a chaotic remnant of a 20-year stay where rearguard troops are trying to salvage the last scraps of dignity and honour, seemingly tossed aside by the political leadership in Washington, by trying to extract American stragglers and Afghan allies. Those allies, once inspired by talk of democracy, women’s rights and the free press, are now faced with the awful life-and-death dilemmas of preserving evidence of their work for or with the US-led coalition, in the hope of last-minute salvation, or destroying it, in a bid to escape execution.

The speed and totality of the defeat at the end of the longest war in US history inevitably raises questions about its place in the broader sweep of modern history, and the biggest question perhaps is whether these scenes mark the last throes of the “American century”.

It has been an era in which the US was supposed to act as the world’s policeman, maintaining order according to a fixed set of rules, and stepping in when necessary to stop the worst crimes against humanity. The reality often turned out to be far short of that ideal, but is the whole project, in theory and practice, now coming to an end?

The term “American century” was coined in 1941 in an essay by the publishing tycoon Henry Luce, who suggested that: “We can make a truly American internationalism something as natural to us in our time as the airplane or the radio.”

That ambition was certainly achieved in the years that followed. The liberation of Europe from the Nazis was followed by astoundingly successful exercises in nation-building in West Germany and Japan, which became prosperous democracies and reliable allies.

There are other populations around the world who have reason to see the US global policeman as essentially a good cop, such as the Bosnians and Kosovans, for whom America stepped in when European powers failed to lead.

It was in the aftermath of the US-led intervention in Bosnia and the subsequent Dayton peace accords that the US secretary of state Madeleine Albright said: “If we have to use force, it is because we are America; we are the indispensable nation.” Few if any US officials talk like that now, and the last Americans left in Afghanistan feel very dispensable indeed.

In other parts of the world, the experience of American global policing has been quite different. It was there to allow the oil to flow and the tankers to sail unimpeded, enforcing a set of rules, albeit rules that were designed at the outset to benefit the US and the handful of great powers. In Latin America, the veneer was even thinner, and the policeman acted like the private security firm for a few corporate interests.

The American century reached its zenith after the fall of the Berlin wall, and the emergence of the US as the world’s sole, unrivalled superpower. The Soviet Union dissolved in 1991, a neat half-century after Luce published his essay.

The apotheosis would last a decade, until disaster arrived out of a clear blue sky on 11 September, 2001. Nearly 3,000 were killed in the attacks on New York and Washington, but it was America’s visceral reaction that would prove to be more damaging to US standing in the world. 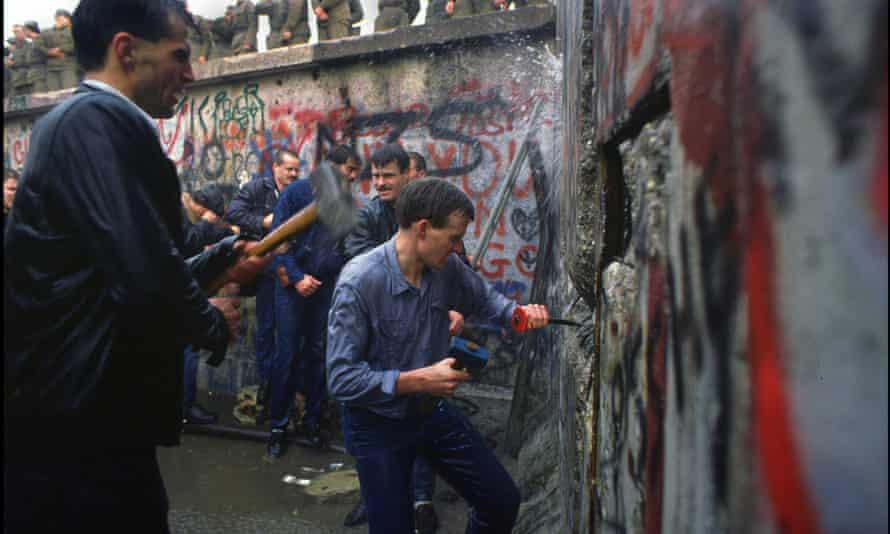 The fall of the Berlin wall in 1989 marked the high point of US power around the world. Photograph: Sipa Press / Rex Features

It triggered the “forever wars” in Afghanistan and Iraq, which may be coming to an end for the US now, but which will continue to be the reality for the civilian populations left behind for years, perhaps decades, to come.

Disaster followed disaster: the Arab spring was a grotesque inversion of the European democratic revolution it was supposed to emulate, leaving bloody chaos both where the old regimes fell, such as Libya, and where they held firm – Syria.

The damage done by 9/11 did not unfold quite as terrorist leader Osama bin Laden intended, according to Nelly Lahoud, an analyst at the thinktank New America who has been sifting through his papers, but it did have a “catastrophic success” in changing the world. It was a case of the autoimmune response proving far more deadly than the infection it was supposed to fight.

In a new book, Reign of Terror: How the 9/11 Era Destabilized America and Produced Trump, former Guardian journalist Spencer Ackerman argues that the worst damage was self-inflicted, through the impact of the “global war on terror” and all its excesses: torture, mass surveillance, militarism and authoritarianism.

“Of all the endless costs of terrorism, the most important is the least tallied: what fighting it has cost our democracy,” Ackerman writes. “How like America it is not to recognise that the true threat was counterterrorism, nor terrorism.”

The backlash produced a repugnance in US public opinion for foreign intervention. One of the few things that Donald Trump and Joe Biden had in common was their determination to leave Afghanistan, and Biden completed the withdrawal that Trump agreed with the Taliban in February 2020 in Doha. 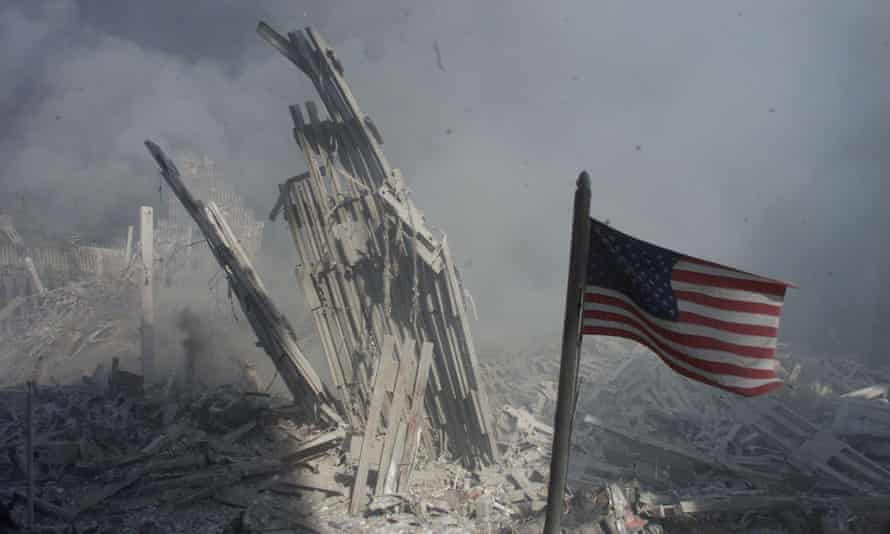 The 9/11 attacks provoked retaliatory action that even Osama bin Laden could not have anticipated. Photograph: Peter Morgan/Reuters

The speed of the Afghan government’s collapse reflected not just military weakness but also a fecklessness and incompetence which had clearly spread through administrations. At the president’s prompting, officials were adamant that the events unfolding at Kabul airport were not a repeat of the evacuation of Saigon in 1975, photos of which had been an emblem of American defeat for more than a generation. But the similarities were unavoidable.

“Having literally been in Saigon for the fall of Saigon, it certainly looks like Saigon to me,” said Viet Thanh Nguyen, a Pulitzer-prize winning author whose family fled Vietnam when he was four, in a tweet.

The US evacuated 130,000 Vietnamese allies in 1975 and subsequently accepted hundreds of thousands of refugees from Vietnam, Cambodia and Laos. It was a test of humanity, but also power. A superpower that cannot or will not protect its allies is not worthy of the name.

In a New York Times commentary Nguyen urged the Biden administration to do as much for the Afghans. “For these civilians, the war hasn’t ended, and won’t end for many years. Their future – and Mr Biden’s role in determining whether it’s one of resettlement and new beginnings or one of fear and misery – is what will determine whether America can still claim it will always stand by its allies,” he wrote.

The withdrawal of US troops in 1973, and the fall of Saigon two years later, seemed at the time as serious a debacle as Kabul feels now. But it was by no means the end for America’s preeminent role in the world. 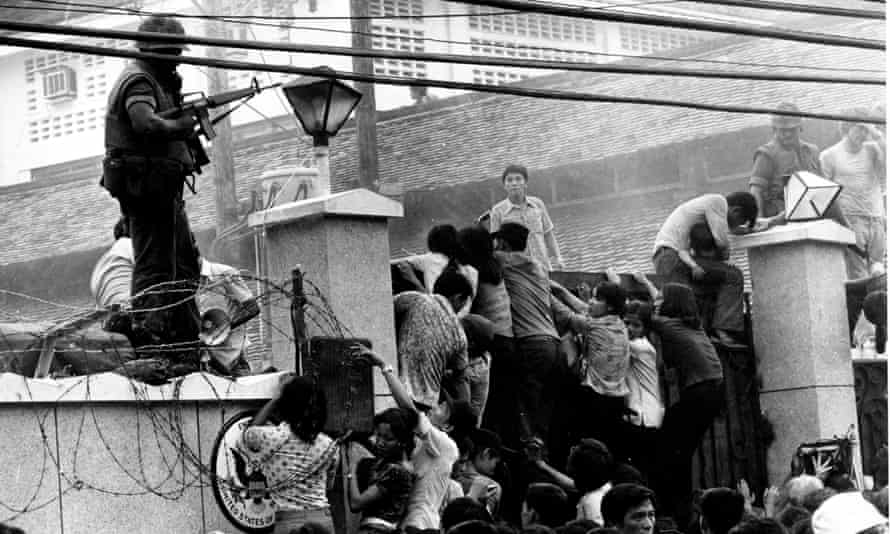 Mobs scale the wall of the US embassy in Saigon, just before the end of the Vietnam War in 1975. Photograph: Neal Ulevich/AP

“As it turns out, US strategy during the cold war – supporting freedom and resisting Soviet communism – succeeded, even in the face of Washington’s blunders in Vietnam and elsewhere,” said Daniel Fried, a former senior state department official now at the Atlantic Council thinktank.

The US remains, by most measures, the world’s biggest economy, with a far stronger network of alliances than its rival, China.

“Nations will now think twice about committing to the US, hedging their bets by edging toward China and Russia,” Joffe said. “Decline, however, this is not. Great powers falter when their material assets wane – as in the case of Britain in the 20th century. By contrast, the US remains the greatest economic power, backed up by technological advantage and the world’s most sophisticated army that can intervene anywhere on the planet, not to speak of the vast cultural clout China and Russia do not have.”

Even after Afghanistan, the US military reach around the globe will still be fearsome, with almost 800 bases in more than 70 countries.

“The US is the most hyper-interventionist great power in modern history, so that even when the American pendulum sort of swings more toward non-interventionism, the US is still globally involved,” said Dominic Tierney, political science professor at Swarthmore College and the author of The Right Way to Lose a War: America in an Age of Unwinnable Conflicts.

Tierney noted that the US war was not even necessarily over in Afghanistan. The administration has said it will continue to carry out air strikes from afar in the name of counterterrorism.

Furthermore, the reduction in the military footprint in Afghanistan and the Middle East is intended to free resources for sharper competition with China. 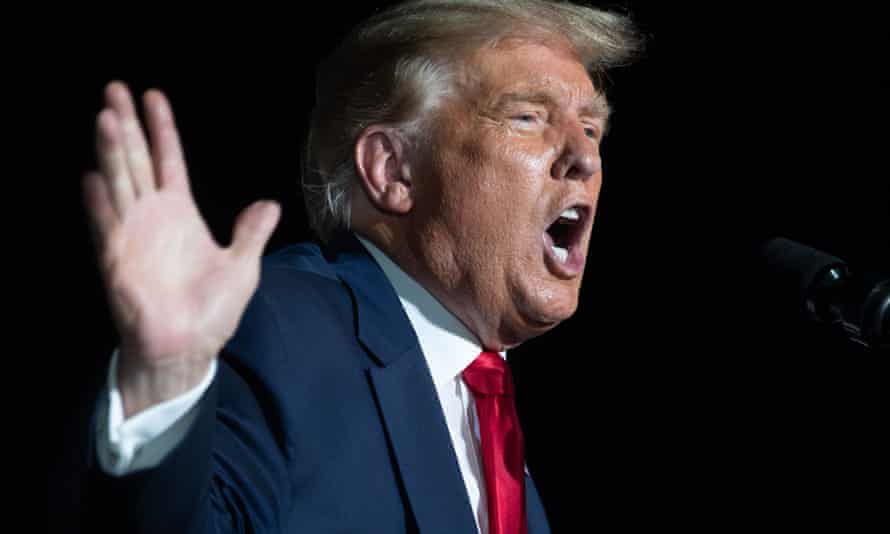 “A retrenchment from the greater Middle East in the service of focusing on greater rivals is something that might well shore up US global hegemony, not weaken it. And I would think that is what most of the Biden administration thinks that they are doing,” said Stephen Wertheim, a historian and fellow at the Carnegie Endowment for International Peace, who examined the origins of the American century in his book, Tomorrow, the World: The Birth of US Global Supremacy.

Wertheim argued however that the character of US military interventionism could change in the wake of the defeat in Afghanistan. “It’s hard to imagine that the idea of nation-building by force will survive the war in Afghanistan,” he said, expressing hope that humanitarian impulses would be channelled through non-military means. “That, to me, is a much more productive form of humanitarianism than the fraught project of trying to kill some people in order to save other people.”

Few Bosnian Muslims, however, believe more humanitarian supplies would have prevented more Srebrenica-scale massacres in 1995. Ćudić, now a member of the federation parliament in Sarajevo, said: “With all the deserved criticism and analysis of the American foreign policy of the past decades, we will live to regret the decline of American ambition.”

The concern in Sarajevo is that Russia and China are filling the space vacated by the US, but without the same interest in preventing the ultimate partition of Bosnia on ethnic lines. It is a pattern being witnessed around the world.

“One of the great dangers for analysis that seeks to be critical of imperialism is the assumption that only the west, indeed only the USA, has imperial ambitions and scope. This is fatal,” said Priyamvada Gopal, professor of postcolonial studies at Cambridge University. “By the end of this century, if the world makes it there, the centre of imperial power will have shifted entirely.

“What is important is that the centre of gravity of capitalism is shifting southwards, and players from Russia and China to India are emerging.”

Afghans ‘crushed to death’ in desperate stampede at Kabul airport

Last year 2,100 Afghans won the visa lottery. Their hopes of making it to the US are dwindling | Afghanistan

‘We buried our sportswear’: Afghan women fear fight is over for martial arts | Afghanistan