Kabul had been swirling with rumours that Ghani would step down as part of a peace deal to spare the capital and its population of over four million. Instead he said he would reorganise the military, and made vague reference to “starting consultations” across society and with international allies. He may not have long to make a decision. On Saturday the whole of Logar province, just south of Kabul and the capital of Paktika province on the Pakistan border were the latest areas to fall to the militants.

In a pattern that has become familiar during a lightning Taliban advance over the summer, the surrender of the Paktika capital, Sharana, was negotiated after local elders intervened in fighting to avoid bloodshed.

Taliban fighters pose as they stand guard in front of the provincial governor’s office in Herat on 14 August. Photograph: AFP/Getty Images

A Taliban campaign launched in May saw them capture much of rural Afghanistan and border crossings by early August. Over the past seven days they have seized urban areas including Kandahar, the country’s second largest city and the Taliban’s spiritual base and former capital, and western Herat, the third largest city.

Advances in Logar have brought the Taliban to the edge of Kabul’s Char Asyab district, just seven miles south of the capital city, lawmaker Hoda Ahmadi said. The capital is gripped by a growing sense of panic, with residents fearful of either street fighting, or a takeover by a vengeful Taliban.

The relatively prosperous, modern capital saw a number of targeted assassinations over the last year, as the Taliban killed journalists, rights activists and others whose vision of Afghanistan did not match that of the insurgents. Many who work in similar fields fear they could be targeted.

The Taliban has urged people to stay, and promised it will not harm those with foreign links. “All those who have previously worked and helped the invaders, or are now standing in the ranks of the corrupt administration of Kabul, the Islamic Emirate has opened its door for them and have announced for them amnesty,” spokesman Suhail Shaheen said on Saturday.

“No one should leave their area and country. They shall live a normal life; our nation and country need services, and Afghanistan is our joint home that we will build and serve together…no one should worry about their life.”

But activists have warned of targeted killings in areas that fell under Taliban control in recent weeks. One victim was popular Kandahari comedian Nazar Mohammad, who posted routines that included songs and jokes on TikTok. He had reportedly also worked with the local police, Human Rights Watch said.

There have also been restrictions on women’s rights, that have raised fears the country is returning to the harsh restrictions of Taliban rule in the 1990s, even though the group’s envoys have promised they respect women’s rights under Islam. In Kandahar women were ordered from banking jobs at gunpoint, and told that male relatives could take their place, Reuters reported. And after Herat fell to the Taliban, rights activists said that women have been barred from the university, where they make up over half of students.

The capital is already packed with internal refugees who have fled either fighting, or the Taliban. Over a quarter of a million people have been displaced since May, the UN said, the vast majority women and children. 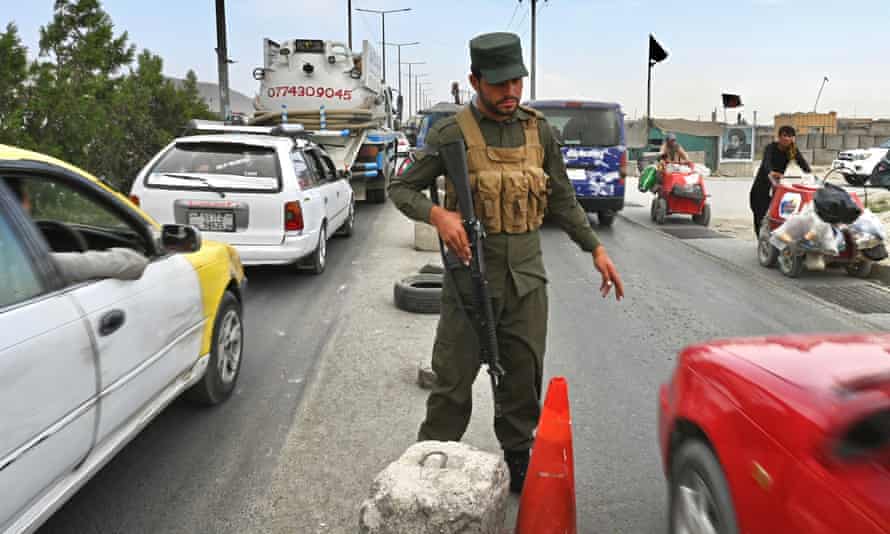 An Afghan policeman stands guard at a checkpoint in Kabul on 14 August. Photograph: Wakil Kohsar/AFP/Getty Images

But those who can are looking to get out of the country. Kabul airport is packed with people, and every seat on every flight out has been booked for days. Charter aviation companies have reported a surge in demand for flights to Kabul, even though they draw a heavy premium.

Banks are crowded with people trying to withdraw their savings, and lines snake away from ATM machines. The passport office is mobbed.

Adding to the sense of desperation, US marines have begun flying into Kabul, part of a 3,000-strong force meant to help airlift out the embassy staff and Afghan allies. Britain and several other western nations are also sending troops to smooth the hasty evacuation of their own citizens.

US embassy staff have also begun to burn sensitive material ahead of the evacuation. Burn bins and an incinerator were available to destroy material including papers and electronic devices to “reduce the amount of sensitive material on the property”, according to an advisory seen by Reuters.

There were also reportedly instructions to destroy items with logos that could be used in propaganda, should the embassy fall under Taliban control, although the US has reportedly been trying to negotiate a deal with the militants to protect its building.

In the UK prime minister Boris Johnson is under pressure to demand an emergency meeting of the UN security council over the crisis, and facing cross-party demands for Britain to commit to a major programme for accepting refugees fleeing Afghanistan.

Several senior Tories said they were embarrassed by the handling of the withdrawal, and the narrow remit of a visa refugee programme which is leaving many linked to the British mission in Afghanistan at risk on the ground. “Afghanistan now represents a massive failure at every level with the international community completely unprepared for the humanitarian catastrophe which is now unfolding , brutality toward women and migration and misery across the region,” said Andrew Mitchell, former development secretary.

“Failure to protect all those who worked for us in Afghanistan and who now face the revenge of the Taliban would be a source of national shame,” Keir Starmer urged the government to respond to the calls for international help. “We have obligations to Afghanistan, we made promises to Afghanistan and we cannot walk away.”