When Reynold Joseph was deported from the US back to Haiti after five years in South America, he was unprepared for just how bad things had become in his homeland.

Outside a ramshackle guesthouse near downtown Port-au-Prince, where he and a dozen other deportees are staying, some goats were grazing on burning piles of rubbish, while drivers honked and cursed in a queue for petrol that snaked round the block. Each night, Joseph’s three-year-old son stirs in the sweltering heat, and bursts of gunfire ring out in the distance.

“It’s no secret that Haiti is poor and unsafe,” said Joseph, who along with thousands of his countrymen was detained in southern Texas last month before being shackled and flown to Port-au-Prince. “But I didn’t know it had gotten this bad.”

There is a Haitian proverb, beyond mountains there are mountains, loosely meaning that after one problem comes another, and in Port-au-Prince, that saying is a harrowing reality.

Violent gangs rule the streets, kidnapping residents rich and poor alike for ransom every day, while shortages of fuel and basic goods are common, and public services from traffic lights to sewer systems are practically nonexistent. When President Jovenel Moïse was assassinated in his home on 7 July in circumstances that remain murky, the situation only worsened. An earthquake the following month added to Haiti’s misery, killing at least 2,200 people and leaving tens of thousands homeless.

Overlapping calamities led the US to advise its embassy staff to stay in the compound, and its citizens to avoid all travel to the country. After the earthquake, the Biden administration extended “temporary protected status” for thousands of Haitian migrants and refugees already in the US to live and work legally. Just a few weeks later, thousands of desperate Haitians who had been detained on the Texas border were deported.

Many of them were returning to a country they had not seen for years, and many of those deportees are already plotting another escape. Some, who had already spent years in Brazil or Chile, plan to try their luck in South America again.

But for many the immediate challenge is survival.

“Of course we want to go back but we spent all our savings trying to get into the US,” Joseph said, speaking in Spanish, which he learned while working as a builder in Chile’s capital, Santiago. “So this is our life now, while we save to try and get out.”

Many recent deportees fled Haiti after the devastating 2010 earthquake that leveled much of Port-au-Prince, killing more than 200,000 and setting the country on a downward spiral of instability from which it has still not recovered.

Since then, gang violence in Haiti has left the country on the brink of civil war. At least 165 gangs – many with tacit political backing and support – operate in the country, running extortion rackets, kidnapping for ransom, and overseeing the local drug and arms trade. Many gang leaders have links with the country’s fragile and corrupt police force; the leader of the most powerful is a former police officer.

“There are areas where the police will not go, where it’s a war zone like Vietnam or Afghanistan,” said Luis Henry Mars, who works on peace building projects in areas controlled by gangs. “The gangs are the state in these neighbourhoods.” 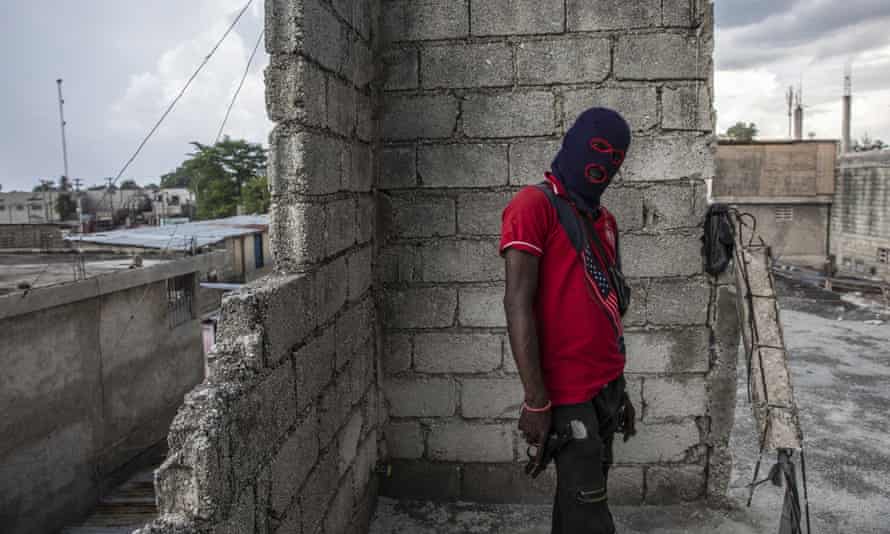 A gang member, wearing a balaclava and holding a gun, poses for a photo in the Portail Léogâne neighborhood of Port-au-Prince. Photograph: Rodrigo Abd/AP

In few places is the brutal rule of the gangs felt more than in Martissant, one of Port-au-Prince’s most notorious districts, which looks everything like an urban war zone.

The buildings that are still standing are pockmarked with bullet holes – including a police station and a hospital once run by Medecins Sans Frontiers, which in June shut its doors after stray bullets hit its walls. Shops and shacks have been looted and razed. Just a few blocks over, the markets teem with commerce, but here, the few locals who remain dare not leave their homes and the streets are a barren wasteland.

The main road, which connects the capital with the country’s southern peninsula, is barely paved and strewn with rubbish, some of it burning in smoldering, rank embers. When it rains, latrines flood, filling potholes with sewage. Up the hills that lead towards hundreds of homes, tyres and the burnt-out chassis of cars block roads, ensuring anyone who attempts to pass can be vetted or kidnapped for ransom.

Motorists immediately hit the accelerator as they enter Martissant. Trucks carrying food and supplies to survivors of the recent earthquake in the south are routinely turned back at roadblocks hastily thrown up by masked gunmen.

On Monday, the road was blocked, gang members exchanged gunfire and a commuter bus was shot at, injuring at least four.

“They only way you can get through is if you have local connections and are able to negotiate passage,” said one Haitian aid worker who grew up in Martissant. 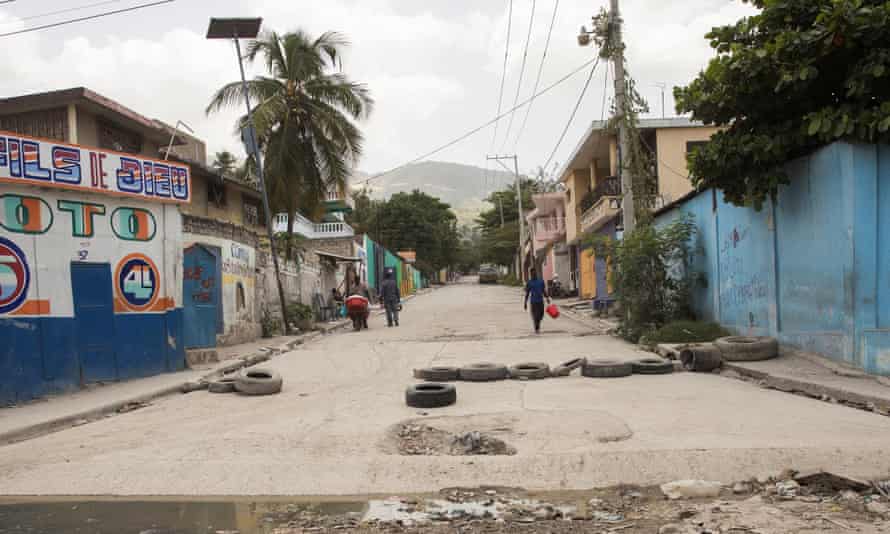 A street in Martissant, a neighborhood controlled by armed gangs, in Port-au-Prince. Photograph: Orlando Barría/EPA

Thousands of residents from Martissant evacuated the neighbourhood in June due to the violence, and are now living as refugees in a sports centre that has been converted into a shelter just one mile from their homes.

Coriolande Auguste fled her home after it was was burgled and torched by gangs, and she sent her toddler daughter to live with her mother in the southern city of Les Cayes. The earthquake in August damaged their home there, leaving Auguste’s elderly mother and young daughter homeless too. The 2010 earthquake killed two uncles and her older sister, while paralyzing her father and leaving Auguste as the sole breadwinner in the family.

Now, Auguste relies on handouts to survive, often going days without eating, and sleeping on a thin roll mat on the hard floor of the overcrowded gymnasium. More than a dozen women in the shelter are pregnant, and there are nearly 350 toddlers. 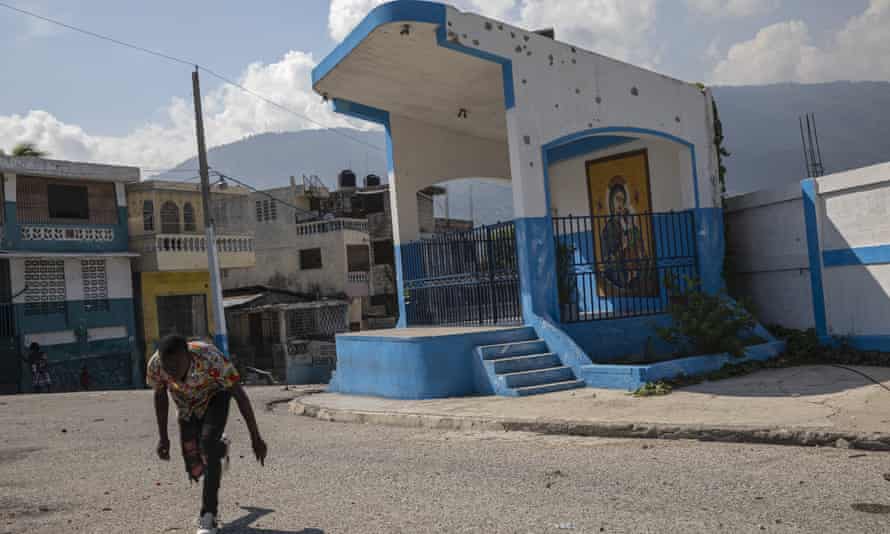 A man runs for cover as he crosses a barricaded street in the gang-controlled Bel Air neighborhood of Port-au-Prince. Photograph: Rodrigo Abd/AP

“Once upon a time we were living perfectly fine but then all of a sudden all hell broke loose. So we ran – I grabbed one backpack and filled it with the first clothes I could grab,” she said, as a line for food, provided by an international charity, turned into a ruckus. “But my neighbourhood is a ghost town, and the only ones there are the crooks.”

Like so many Haitians, Auguste wants to start a new life in a safer, more stable country, but has neither the funds nor the papers to do so.

“Who wouldn’t want out of this?” she asked as a boy in a ripped T-shirt cycled laps on a dilapidated athletics track within the compound, abandoned since it was partially destroyed in the 2010 earthquake. “But I don’t have money to eat, let alone a plane ticket.”