More than 40 ancient objects are being lent to the UK by museums in Peru for a major exhibition aiming to show there is a lot more to the country’s history than the Incas.

The British Museum said the loan of the items, some of which date from over 3,000 years ago, was unprecedented.

The exhibition will include the Incan empire, which existed between 1400 and the Spanish conquest of 1532. But it will also shine a light on the ancient Peruvian societies which went before: the Chavin, who date back to 1200BC, followed by the Nasca, the Moche, the Chimu and the Wari.

Curators said the exhibition would explore how ancient peoples thrived in a country which is one of the most challenging and geographically diverse in the world. On the Pacific coast there is arid desert, then some of the highest mountains in the Andes and in the east there is tropical Amazonian forest.

A painted pottery vessel in the form of a warrior holding a club and a shield from the Moche, AD100-600. Photograph: Yui Mok/PA

Jago Cooper, head of the Americas at the British Museum, said when you talk to the UK public about ancient Peru, “they might have heard of Machu Picchu, but that is about it”. The aim was to explore cultures people “may never have heard of before”.

He said: “What’s important is that these cultures developed completely independently from the rest of the world so it is an exhibition that challenges how society itself can be constructed.”

The items include a particularly stunning 2,500-year-old gold headdress and a pair of ear plates which were part of an elite burial. They are decorated with embossed motifs of human faces with feline fangs and snakes.

The oldest object is a ceremonial vessel from the Cupisnique culture, who lived on what is now Peru’s Pacific northern coast. Thought to date from 1200BC, its shape is a contorted human body, possibly representing someone born with a disease which causes loose limbs and unusual flexibility – a revered ability. 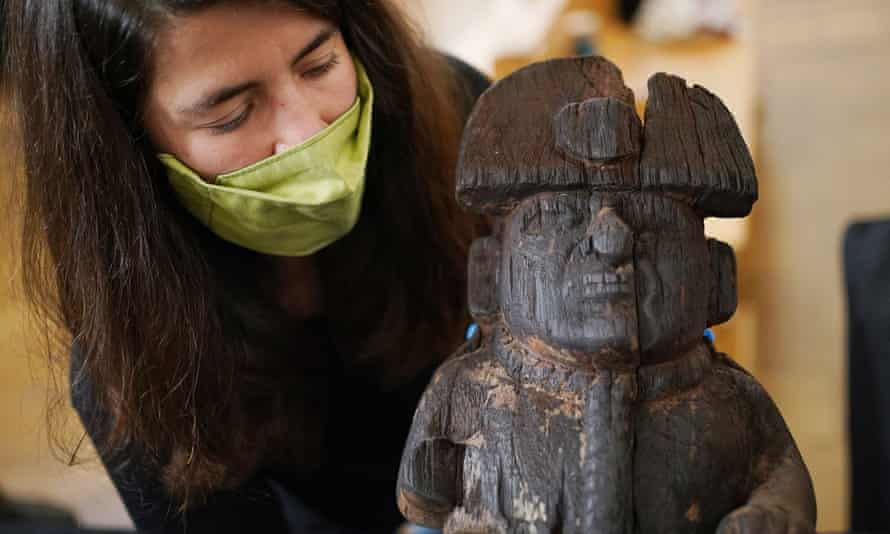 Collection manager Ana Carreira Galban holds a wooden figure depicting a bound prisoner with a headdress and rope around his neck, from the Moche people, dating AD100-800. Photograph: Yui Mok/PA

There is also a Nasca ceremonial drum from around 100BC-AD650, depicting the capture of defeated enemies in ritual combat.

The Nasca people lived in Peru’s inhospitable southern deserts. Cecilia Pardo, the show’s co-curator, said they performed some of the most complex funerary practices and produced some of the “most amazing textiles” in the whole of the ancient world.

One 2,000-year-old funerary blanket, coming from Lima, looks like it could have been computer-generated yesterday. It shows human figures in golden feline masks carrying severed heads.

The blanket would have been one of 50 layers – blankets, shawls, headdresses and so on – wrapped around an important man or woman on their death and was from one of more than 429 funerary bundles discovered at one site in 1924.

There will also be 90 objects from the British Museum’s own collections, many of which have not been on display. 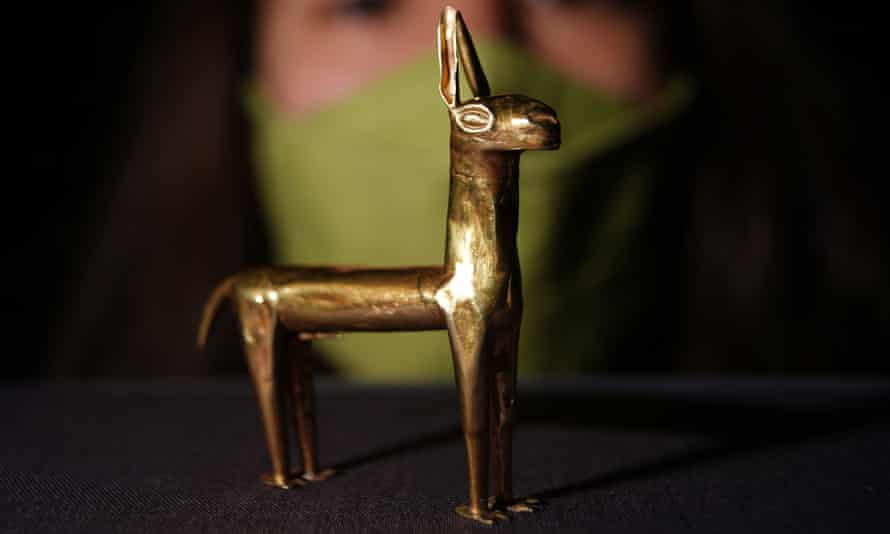 The llama from the British Museum’s own collection. Photograph: Yui Mok/PA

It includes a miniature gold figure of a llama from about 1500. It was most likely left as an offering to the mountain gods, accompanying a human sacrifice.

Discussions about having a major Peru exhibition have been going on for about a decade. The pandemic has meant that a lot of the organising has taken place via Zoom and WhatsApp.

Pardo hopes visitors will discover how ancient Peruvian societies had unique approaches to economy, gender, agriculture, power and beliefs “and how they thrived against the odds right up until the Inca conquest by the Spanish.

“It will be eye-opening and will challenge common western assumptions about how societies are constructed.”

It is the first major exhibition that the British Museum has ever staged on Peru and is supported by its tourism board, Promperu. It coincides with the 200th anniversary of the country’s independence.

Peru: a journey in time is at the British Museum 11 November-20 February.

The prince, his valet and a Saudi billionaire: meritocracy in action | Marina Hyde

Nayib Bukele calls himself the ‘world’s coolest dictator’ – but is he joking? | El Salvador

Canada, China and US were all doomed to lose in Meng Wanzhou’s case | Huawei