Sergio Ramírez, Nicaragua’s best-known living writer, hero of the Sandinista revolution, and former vice-president of the volcanic Central American nation, has lived through both tougher times and duller publicity tours.

Even so, the past few days have been – as he puts it, with a degree of understatement – “an odd experience”.

Ramírez always knew his latest novel, Tongolele no sabía bailar (Tongolele Didn’t Know How to Dance), would cause a stir in his homeland. But he confesses to feeling “surprised, bewildered and assaulted” when the regime of his erstwhile comrade, President Daniel Ortega, issued a warrant for his arrest last week, accusing him, among other things, of conspiracy, money laundering, inciting violence and hatred, and undermining national integrity.

To banish any lingering doubts about the government’s extraordinary antipathy towards the 79-year-old author and his works, Nicaraguan customs officers also impounded all copies of the new book on arrival.

For Ramírez, who moved to Costa Rica in June and is currently promoting the new novel in Spain, the initial shock soon gave way to a familiar and unpleasant feeling.

“When this kind of thing happens, you find yourself under an avalanche of memories,” he told the Observer.

Ramírez’s new book Tongolele no sabía bailar / Tongolele Did Not Know How to Dance. Photograph: Handout

The memories stirred by the charges – which Ramírez dismisses as risible – were of similar events more than four decades ago. In 1977, the writer was a member of the influential Group of 12, a collective of intellectuals, business people and priests who threw their weight behind the Sandinista National Liberation Front’s efforts to topple the dictatorship of Anastasio Somoza Debayle.

The dictator’s regime responded by accusing the group of terrorism and criminal conspiracy. The charges, however, came to nothing and the triumphant return of the 12 to Nicaragua from Costa Rica the following year proved one of the events that heralded the end of the Somoza dictatorship in 1979.

“All of this brings a certain feeling of deja vu, but then for me there’s always a sense of deja vu when it comes to the entire history of Nicaragua,” said Ramírez.

“The abuses of power and the way power gathers – and structures itself – always repeat themselves. It’s a kind of circular constant in Nicaragua’s history throughout the whole of the 20th century and to the present day.” 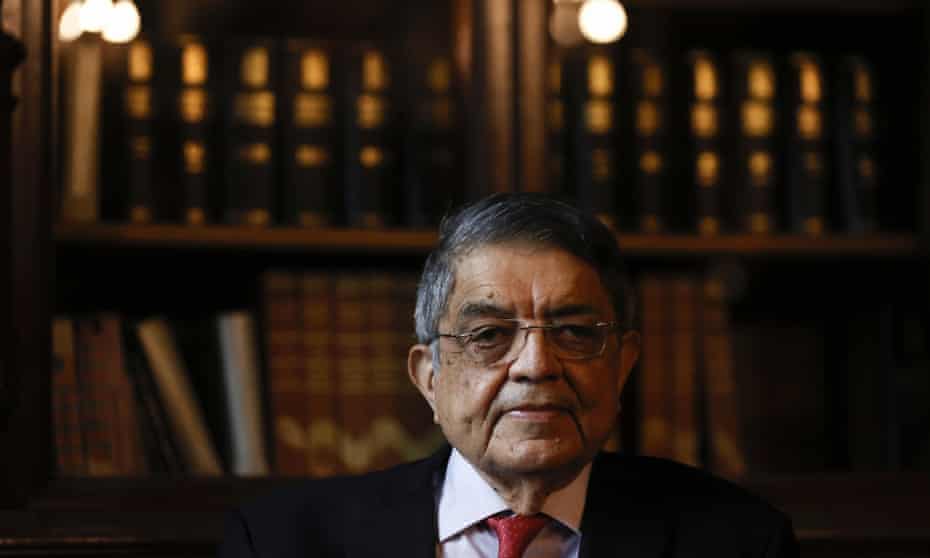 Ramírez, 79, says: ‘It’s really difficult to be facing exile at my age when the horizon’s narrowing.’ Photograph: Emilio Naranjo/EPA

Today, 42 years after the revolution, the circle has closed and Ortega – once hailed as a liberator, a hero of the left and a scourge of tyranny – has dwindled into a despotic figure to rival the man he overthrew and a dictator prepared to resort to any means necessary to keep himself and his wife and vice-president, Rosario Murillo, in power.

Tongolele no sabía bailar is a detective novel that examines the brutally suppressed 2018 uprising, when tens of thousands of people took to the streets to protest and call for Ortega and Murillo to resign.

“The book looks at the events of 2018 in Nicaragua: the repression; the deaths of more than 400 young people in the streets; the fire at a mattress factory that killed an entire family, and the assault on the Church of Divine Mercy,” said Ramírez. “All these things really happened and they appear in the novel.”

Despite the novel’s real-life setting, its writer is keenly aware that much of what passes for normality in his homeland can tend more towards the fantastic than the mundane. Take, for example, Murillo’s notoriously idiosyncratic potpourri of Roman Catholicism and new age beliefs.

“The kind of power that’s been created in Nicaragua these days is esoteric, magical; a power that’s based on trees of life and the beliefs of Sai Baba,” said Ramírez. “It all sounds very novelistic but it’s all real and it’s how power’s organised now. And I don’t think [Ortega and Murillo] like seeing these things in a novel, even though they’re real.”

While Ramírez could do without the pressure and anxiety of the arrest warrant – “it’s really difficult to be facing exile at my age when the horizon’s narrowing” – he is pleased his book and his plight are helping to drag the world’s gaze towards the social and political realities of life in his homeland. 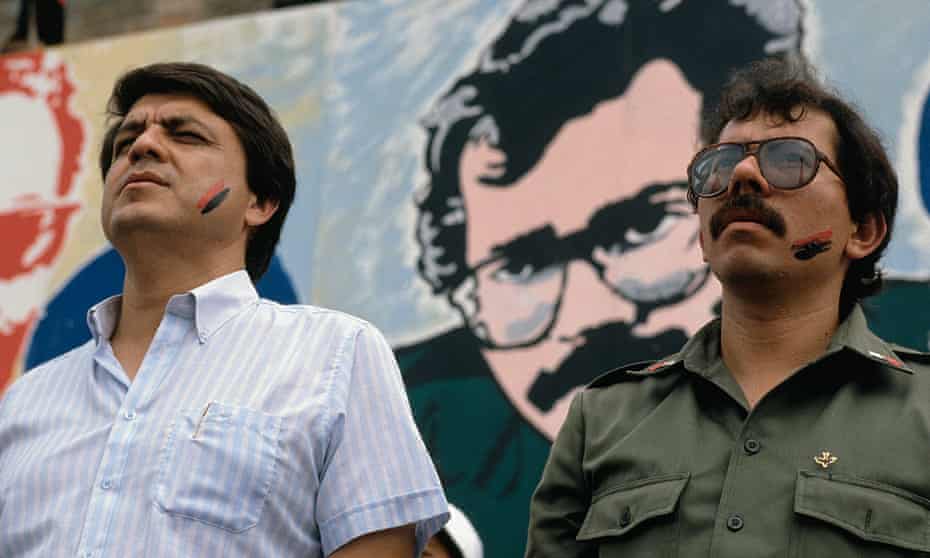 Sergio Ramírez Mercado on the campaign trail with Daniel Ortega in Matagalpa in the 1980s, when he was the latter’s running mate in national elections. Photograph: William Gentile/Corbis/Getty Images

“The novel has shifted a lot of people’s attention to the situation in Nicaragua; the fact that the book’s been seized and suppressed and its author threatened with prison has acted like a bit of magnet,” said Ramírez.

But if impounding Tongolele no sabía bailar and issuing an arrest warrant for its author was intended to stifle dissent and criticism, the move appears more than a little bone-headed.

Pirated PDFs of the book are already doing the digital rounds in Managua and beyond: “People are sharing and spreading the book as a means of resistance – or at least that’s how I see it. They’re not legal editions, so I obviously can’t support them, but I do understand that reading the book on social media – even if it’s an illegal edition – is a way of resisting.”

Ramírez himself – who was awarded the Spanish-speaking world’s highest honour, the Premio Cervantes, four years ago – has been inundated with offers of support from hundreds of other writers and artists, including the Nobel prize-winning author Mario Vargas Llosa.

On a more practical level, Ramírez is also not short of potential spare rooms, should the need arise.

Although Ramírez is happy to act “as a window through which people can get a look at what’s going on in Nicaragua”, he is at pains to stress that he has been far luckier than the 140 political prisoners currently languishing in the regime’s jails.

He also hopes that the current situation will open people’s eyes to the “total and utter farce” of the forthcoming elections in November. To date, eight opposition candidates and about two dozen opposition leaders have been arrested on vague treason charges.

“They aren’t elections in the proper sense of the word,” said Ramírez.

“People won’t be able to choose between candidates – the candidates are in prison and the main parties have been outlawed.”

Ramírez split with Ortega in the mid-1990s following the Sandinistas’ shock defeat in the 1990 election and amid growing concerns over the movement’s post-revolutionary democratic direction.

Can he see any traces of his old comrade in the man clinging so desperately to power in the third decade of the 21st century?

“None. None at all. I haven’t seen Ortega for maybe 25 years – we haven’t come face to face. But this person who’s consolidating his tyranny so obsessively – and, at the same time, so insecurely – is a person I don’t recognise.” 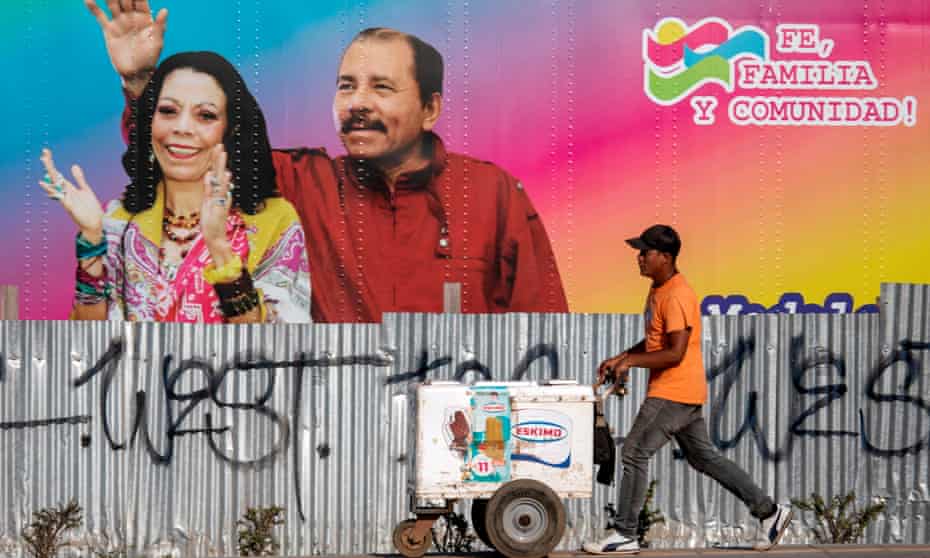 According to Ramírez, the regime of Daniel Ortega and his wife and vice-president, Rosario Murillo, exercise a kind of ‘esoteric, magical … power that’s based on trees of life and the beliefs of Sai Baba.’ Photograph: Inti Ocón/AFP via Getty Images

What he does recognise, though, are the similarities between Ortega and the dictatorial dynasty he defeated.

“The two dictatorships look a lot like each other – they’re both family dictatorships based on personal power and the power of the military and the police,” said Ramírez. “Somoza had the support of the Guardia Nacional and Ortega has the army.”

And yet for all the shocks of recent days, and all the gloomy talk of tyranny, of fixed historical cycles and of a revolution that began to spin the wrong way a long time ago, Ramírez refuses to surrender either his pen or his optimism.

“I’m going to keep writing for the rest of my life because that’s my trade – and I’ll keep doing it wherever I end up,” he said. “Nicaraguans need to keep our chins up.”

There’s a saying from Popol Vuh, the sacred book of the indigenous Kʼicheʼ people, that he’s fond of: “‘The darker the night, the sooner the dawn breaks.’ I hope the dawn breaks soon in Nicaragua. And I hope the international community doesn’t forget what this country is going through and what it’s fighting for.”

The best new TV and films to stream this week

Grace Dent on the golden age of soaps: ‘They gave the nation something to gossip about’ | Soap opera