WAITROSE is bringing back its very posh £20 Valentine’s Day meal deal – and it includes venison steak with a chocolate butter.

Champagne is also on the menu as part of the romantic selection. 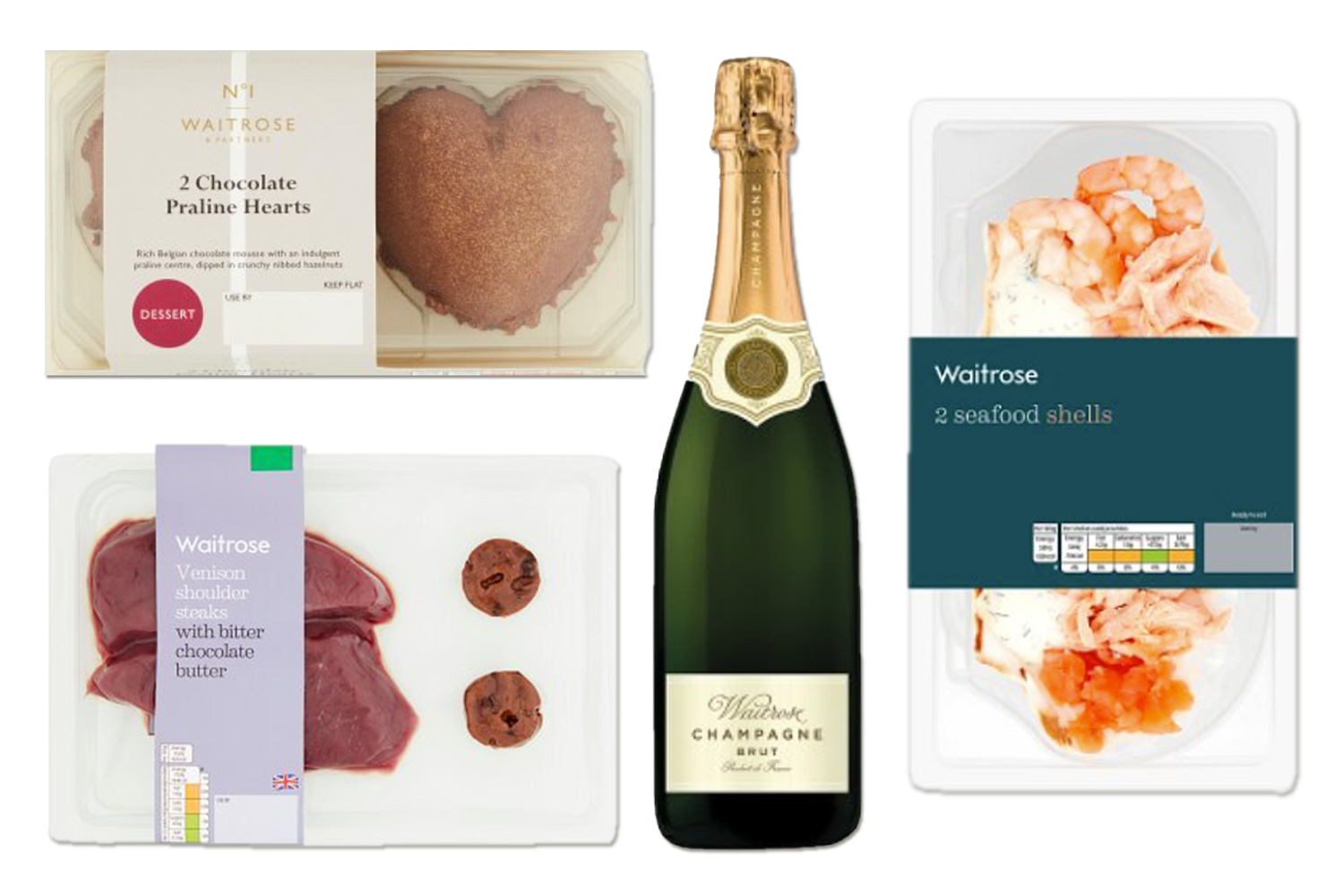 The dine in offer includes one starter, one main, two sides, one dessert, plus the choice of a bottle of drinks or box of chocolates.

The venison rump steak main is described by Waitrose as being “lean and tender” with a bittersweet chocolate butter to melt on top of it.

Other options for mains include pork shoulder with garlic and honey rosemary, and lamb racks with heart-shaped butter.

For your starter, you could pick garlic king prawns, seafood shells or chicken liver parfait.

HUNGRY for love? Here’s what’s on offer this Valentine’s Day at Waitrose.

Their £20 meal deal includes one starter, one main, two sides, one dessert, plus the choice of a bottle of drink or box of chocolates.

Waitrose hasn’t provided individual prices for each item, but we’ll update this article once we’ve got this information.

There are 50 food options and eight drinks to choose from – you can see everything on offer in the box above.

In terms of drinks, you can pick between Waitrose Brut NV Champagne – although it is a smaller 37.5cl bottle, compared to standard 75cl size – red wine, white wine or beer.

If you don’t fancy booze, you can choose a box of Waitrose luxury chocolates instead.

Waitrose says the maximum saving you can get compared to buying each item individually is £16.99.

You can get the best saving by buying the most expensive items in the deal.

For example, the priciest starters cost £4, with choices for this price including live parfait and seafood shells, while the most expensive main is the £10 ribeye steak with Bearnaise butter.

Pair these with two of the rainbow salads, priced at £3 each, so £6 in total, the £5 vintage cheddar heart, and the half bottle of champagne, which would usually cost £11.99 on its own.

This combination would usually come to £36.99 but you’ll only pay £20 thanks to the deal.

Posh rival M&S is also charging £20 for its Valentine’s Day deal – but there are two main differences.

With M&S, you only get one side, compared to two with Waitrose, but you don’t need to pick between a drink or chocolates as both are included.

Sainsbury’s is advertising its deal as “£20 or less” so you only get money off your combination of food if it costs more than £20.

Other supermarkets – including Asda, Co-op, Morrisons and Tesco – are charging £15 for their Valentine’s Day meal deals.

We’ve rounded up the best Valentine’s Day meal deals from all the supermarkets here.

Here’s all the ways to send Valentine’s Day cards for free to your other half.

Or if you’re planning on popping the question, Poundland confirmed it has brought back its £1 engagement rings.

We test oven chips including Aldi, M&S and Aunt Bessies to see which ones are best