A MAJOR supermarket has stopped selling disposable BBQs in ALL of its UK stores.

Marks & Spencer will no longer sell the popular summer item as it wants to help “reduce the risk of fires”, according to Sky News.

Throwaway BBQs are now BANNED across all M&S storesCredit: Getty

This summer has seen temperatures rocket and a lack of rainfall, creating very dry conditions that can be a fire risk.

M&S has reportedly tweeted: “We’d already stopped selling disposable barbecues near national parks and in London but given the unusually hot and dry conditions, we’ve taken the precautionary step of removing them from sale across the UK.”

A record heatwave swept across the country in July, which saw a spike in emergency calls reporting fires.

The London Fire Brigade alone received more than 2,600 calls — over eight times higher than usual – on the hottest day on record. 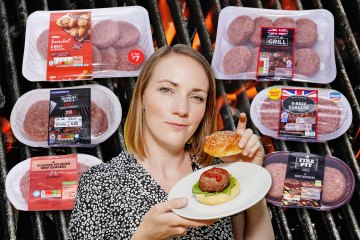 While outside of the capital, wildfires spread across other parts of the country – such as Kent.

It led calls from firefighters for a ban on disposable BBQs after a rise in fires sparked by the item.

Speaking at the time of the mega heatwave, London’s fire commissioner Andy Roe said: “London Fire Brigade has been issuing warnings and safety advice to Londoners throughout the summer, but people are continuing to behave carelessly and recklessly.

“I am now calling for a temporary ban on the use of barbecues in all public parks and open spaces and I’m asking for your help to keep people safe.”

But the London Fire Brigade told Sky News that the move by M&S was “good news”.

As the hot weather continues, households will also face a hosepipe ban to prevent a shortage in water supply.

Millions of households have been slapped with a ban – and flouting the restrictions could see you landed with a £1,000 fine.

Southern Water last week announced a ban affecting nearly a million of its customers in Hampshire and the Isle of Wight which takes effect on Friday.

Other suppliers, such as Thames Water and Walsh Water have also warned they may follow suit as they urged their combined 17million customers to cut back on usage.

A BBQ expert explains the common mistakes you are making when firing up your grill.

We round up the cheapest BBQs on sale.