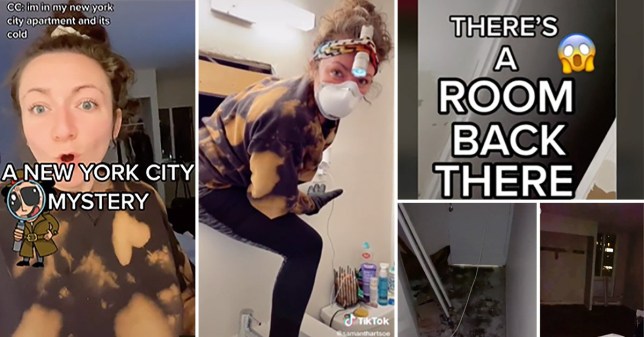 Would you climb through the hole? (Picture: TikTok/@samanthahartsoe)

A woman found a ‘secret’ apartment behind the bathroom mirror in her New York City apartment – and documented the incredible discovery on TikTok.

Samantha Hartsoe began the epic saga by explaining that her apartment was always cold, and she couldn’t find the source of a breeze in her bathroom.

In the video, Samantha shows viewers that air is blowing enough to move her hair, but the room has no vent.

After searching the bathroom, she discovered the air was coming from behind her bathroom mirror which was on the wall.

Samantha said: ‘So I realise the mirror moves … let me show you what I found in my New York City bathroom.

She added the caption: ‘Seriously never would I have expected to find this … and I documented all of it.’

‘I have to go in and figure out what is on the other side of my bathroom,’ she says. She also says she’s worried someone may be living in the hidden room – which would truly be the stuff of nightmares.

Disconcertingly, there was then a three-hour delay between the next video being posted. But thankfully, Samantha posted the third and fourth parts of the drama for her enthralled followers.

In the final clips, Samantha squeezed through the hole in the wall and was stunned to find an entire apartment on the other side.

The apartment was full of rubbish bags, but otherwise it was empty and didn’t look like anyone was living there.

Samantha said her next steps would be to cement her mirror to the wall and call her landlord about the secret apartment.

Some people in the comments were excited for Samantha about the prospect of extra space – but others were thoroughly freaked out.

‘As a New Yorker, my first thought was ‘wow, extra storage space,”‘ one person commented.

‘Girl don’t say anything you just got a second apartment,’ said another.

However, someone else wrote: ‘The fact that the door was unlocked and there was a very recent brand water bottle instantly makes me think of a spying situation. That’s just my anxiety talking.’

Creepy or cool? We’re not sure.