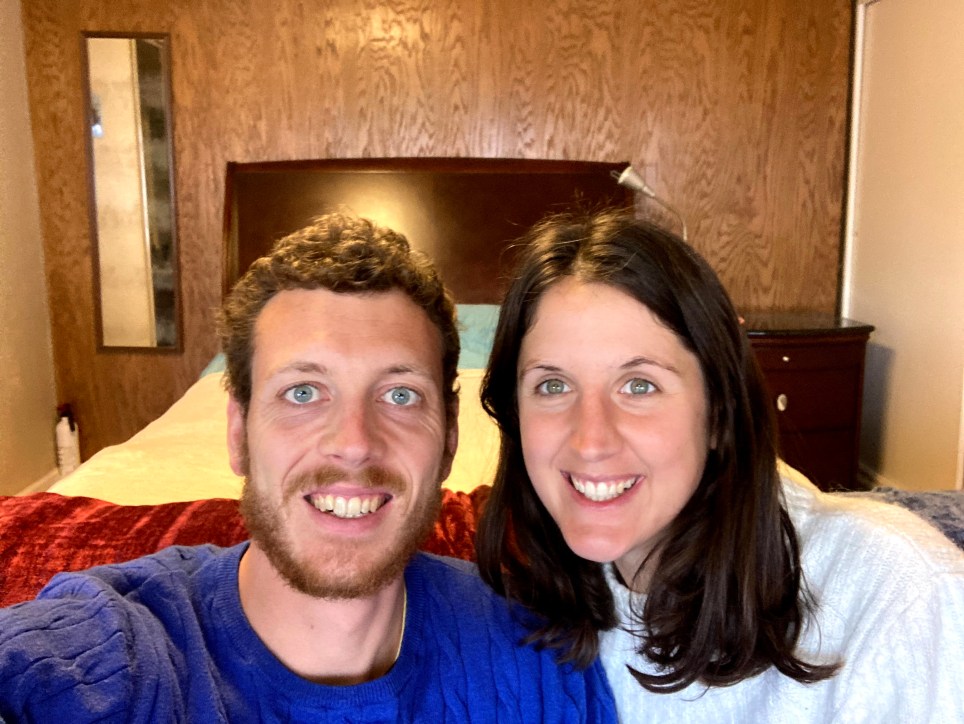 Welcome back to What I Rent, our weekly series exploring the reality of renting – the good, the bad, and the depressingly overpriced.

Last week we looked around the studio flat in Paris, France, rented by film director and journalist Farah.

This time we’re (virtually) heading to California, US, to see the studio apartment rented by Chris, 31, an author and journalist, and his wife, Sarah, 32, a clinical scientist.

After living in Cambridge in the UK, the couple moved to California in September 2020 for Sarah’s career, first living in a converted garage before moving to their current place, a studio flat.

We chatted with Chris about what the couple rent.

Hey, Chris! How much do you and Sarah pay to live here? 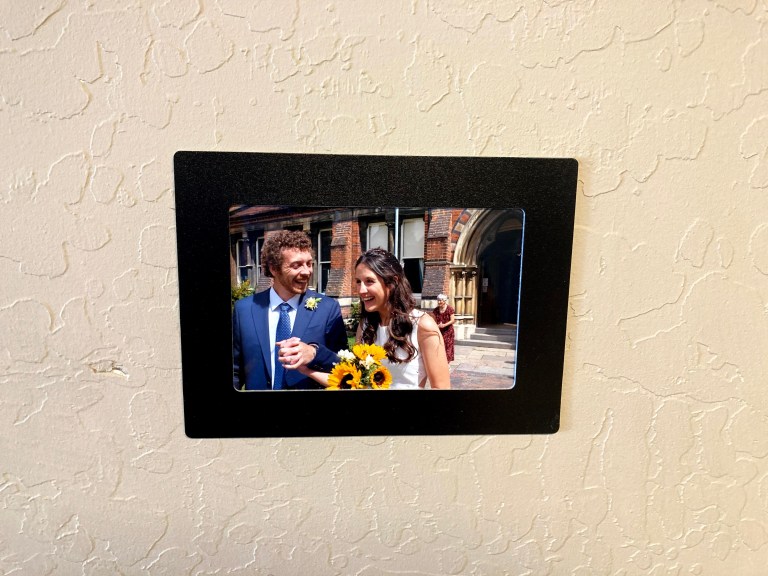 We live alone in our studio, which is an annexe to a much larger property rented by a brother and sister in their thirties.

The studio has a bathroom, but other than that it’s just one room!

Do you feel like you have a good deal?

Ridiculously, yes. When we first arrived here, we spent the first few months living in the centre of town in a converted garage. The rent there was $3,000/month which we couldn’t afford to sustain.

The astronomical local property prices are best indicated by the fact that four years ago the city council considered providing subsidised housing for people on salaries of less than $250,000. Since then the cost of living has only increased.

We would balk at paying $1,800 per month for a similar property anywhere else, but as we are living in one of the most expensive neighbourhoods in the world, our mindset has been warped and prices that we would have previously regarded as outrageous, we now judge to be acceptable.

Still, our home is the cheapest property that was available to rent at the time. Our landlord even threw in a free bike. 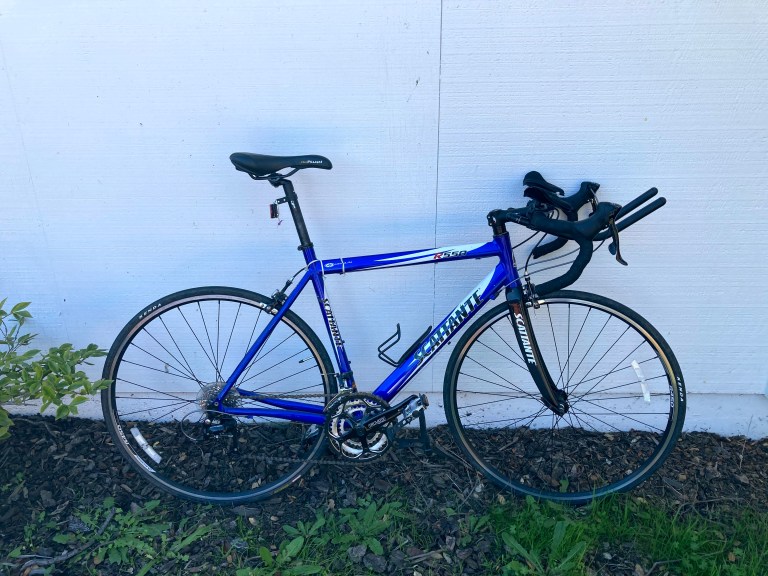 The landlord threw in a free bike (Picture: Christopher Atkin)

What do you think of the area?

We live in California, in the town of Palo Alto – the birthplace of Silicon Valley. It’s a very pleasant place to live and the small town centre is modern and stylish. The streets are lined with parked Teslas, boutique shops and fancy restaurants – none of which we can afford!

One of the biggest advantages of living in Palo Alto is its location: it’s only a 40-minute drive south of San Francisco and a half an hour journey to the beaches on the Pacific coast.

How did you find the property?

It was advertised on Craigslist. The rental market here seems far less regulated than in the UK.

Before we found our current studio, we corresponded with people on various websites who turned out to be fraudsters, all of whom promised to reserve properties for us if we sent them money without viewing the properties first. We politely declined.

How have you made this place feel like home?

We haven’t made much of an effort, but we have placed some of our books on the shelves and put on the wall a few photos from our wedding which took place last August.

We haven’t considered decorating as we have been spending all of our free time (and limited leftover money) on exploring everything that California has to offer. 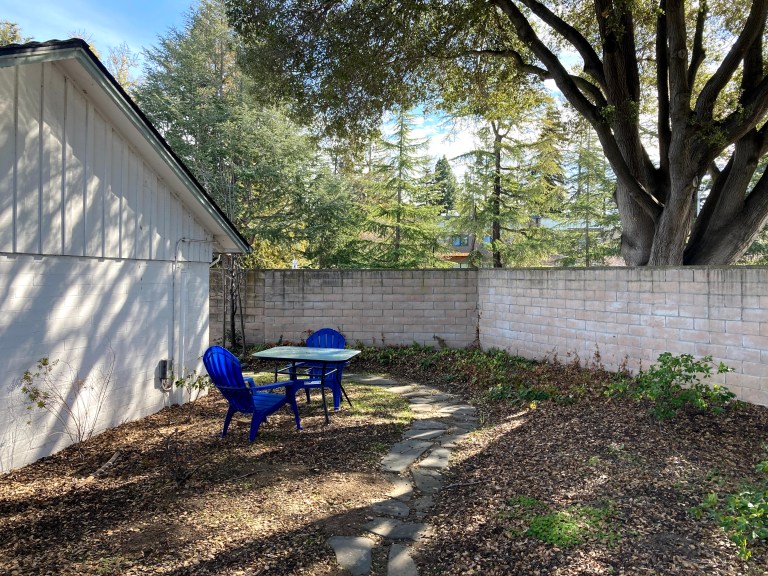 The flat is an annexe attached to a main house rented by another couple (Picture: Christopher Atkin)

In a word, no. Space is very much at a premium.

Like many people at the moment, due to the pandemic Sarah works predominantly on Zoom. This can at times make it difficult to concentrate as we spend most of the week at opposite ends of the table.

If the weather is dry, I can wrap up warm and work outside for a bit in our small garden area, but otherwise I need to put my headphones on.

The studio also has a lack of work surfaces to prepare food on and the limited available floor space means that putting washing on clothes horses to dry turns the studio into a bit of an obstacle course.

Are there any problems with the home you have to deal with?

The electrical wiring of the studio isn’t great, which means you can only have certain appliances on at any one time otherwise they will fuse.

When looking at prospective properties we noticed that very few of the places we could afford had ovens or central heating.

Our place has neither, so in some ways it’s fortunate we don’t have a big space as it would take longer for us to feel the effects of our two electrical fan heaters.

Even so, due to the studio’s lack of insulation, we have spent the past few weeks wearing two jumpers!

Not at present – we’ll see what the future holds.

And do you want to own a place some day or are you happy to rent?

It’s impossible to conceive of a world where we can own a property in Palo Alto so while we’re here we will certainly be renting.

Shall we have a look around? 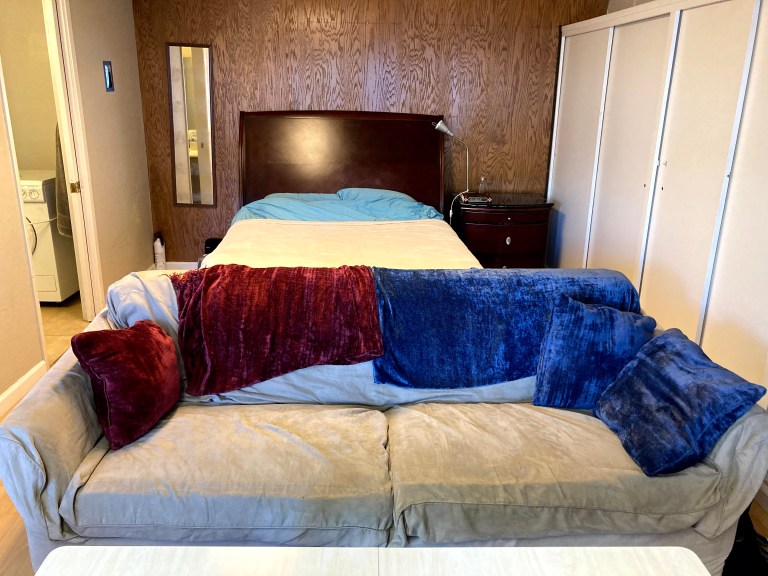 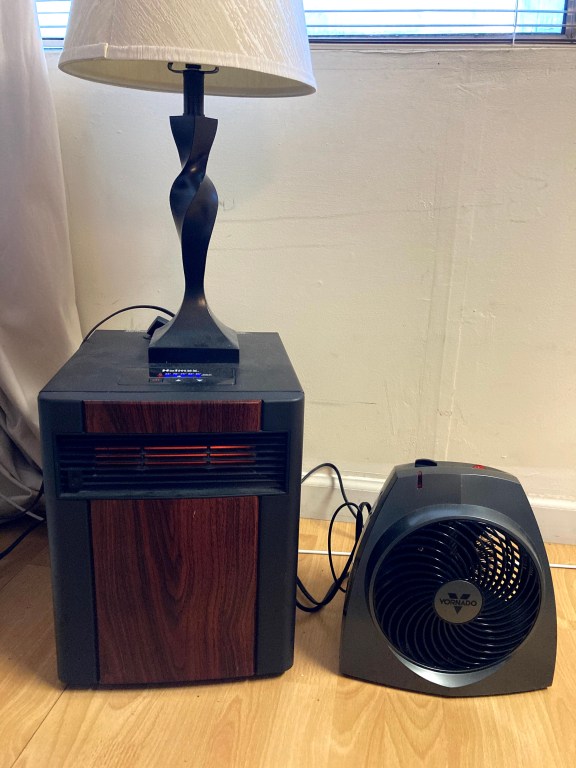 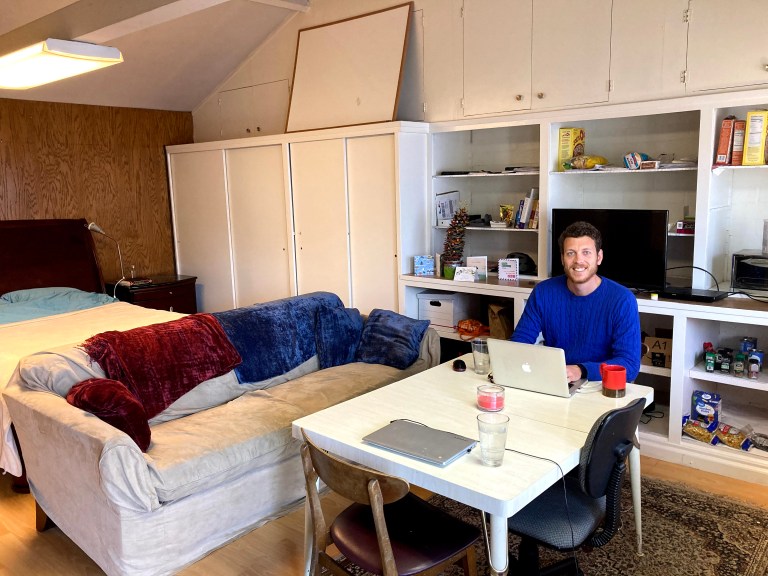 The pair have been working from home in the pandemic, on opposite ends of the same table (Picture: Christopher Atkin) 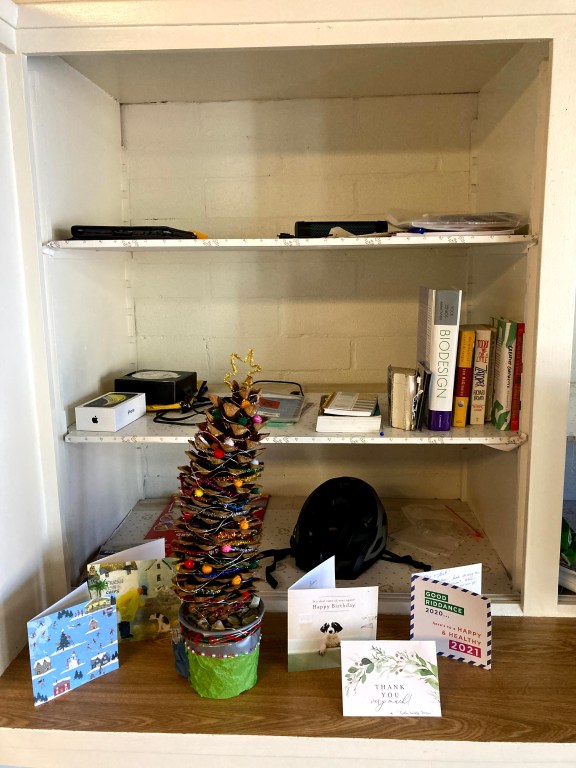 They haven’t done much to decorate (Picture: Christopher Atkin) 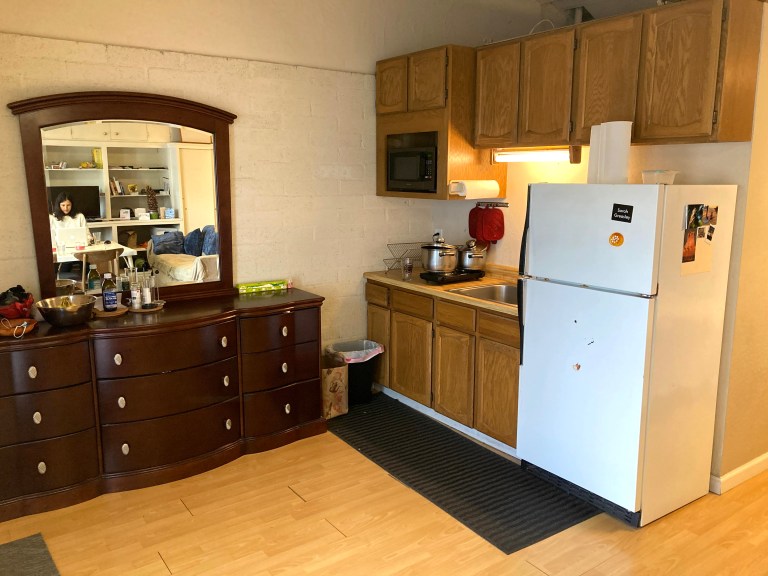 ‘Our home is the cheapest property that was available to rent at the time,’ said Chris (Picture: Christopher Atkin) 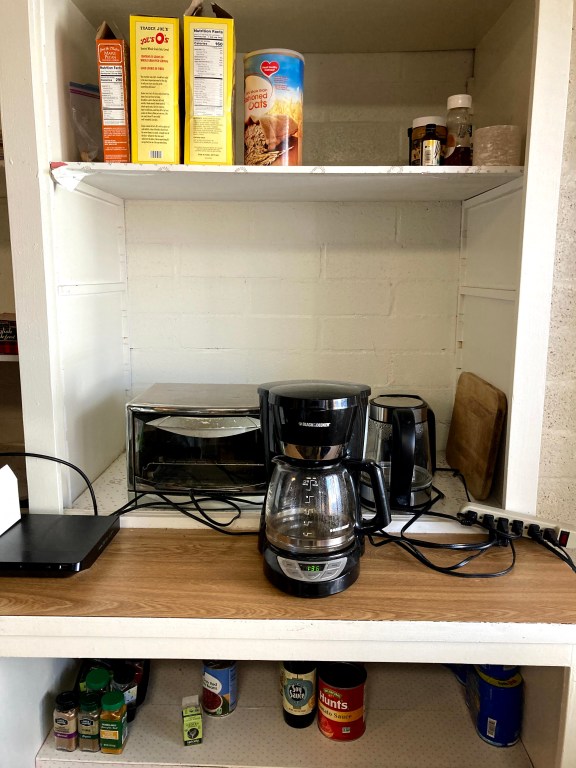 The wiring is a bit dodgy, too (Picture: Christopher Atkin) 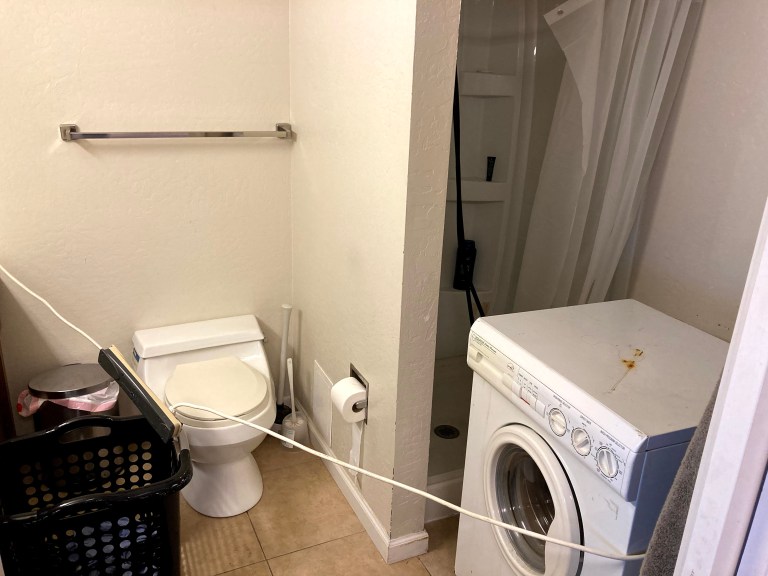 Yes, that is a washing machine directly in front of the shower (Picture: Christopher Atkin) 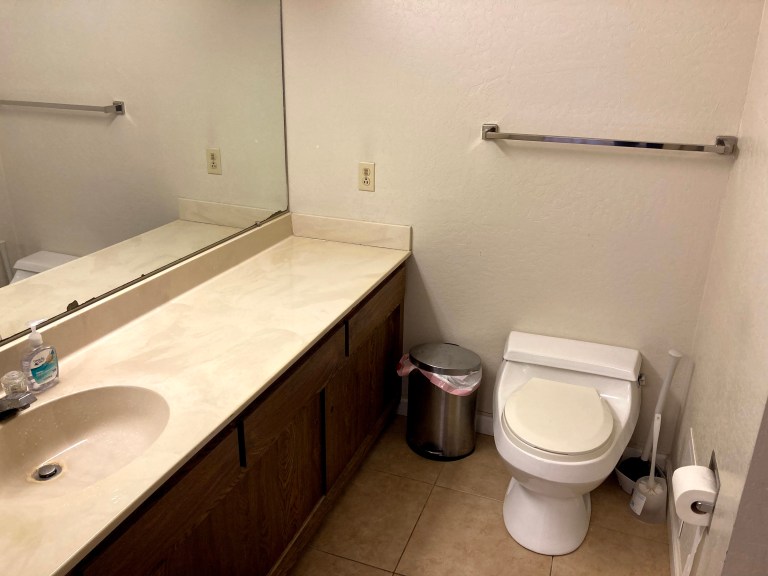 It’s on the other side of the toilet (Picture: Christopher Atkin)

Online mortgage calculators – work out how much you can borrow

What I Own: Nikki, who transformed her £482k house in Streatham Hill

Former home of Agatha Christie on sale for £2.75million