What I Rent: Chelsea & Tyler $2,045 a month for an apartment in Florida

Welcome back to What I Rent, our weekly series that takes you inside people’s rented homes and has a proper nose around.

Last week we were in Balham, London, where Gemma and Josh rent a one-bedroom flat for £1,560 a month.

This time around, we’re thousands of miles away, in St. Petersburg, Florida, in the US.

This is where Chelsea, 28, her boyfriend Tyler, their dog Olive, tuxedo cat Dexter, and fluffy orange cat Archie live.

Chelsea works for a pharmacy technology company that allows her to work from home, so the apartment she rents with Tyler has to double as an office.

She grew up in the Tampa Bay area then moved to Orlando before moving back after graduation. She’s been here ever since.

Here’s what the couple rent.

Hey, Chelsea! How much do you pay to live here?

We actually just re-signed our lease and it went up a bit due to the crazy market conditions here right now.

In total, we’re paying about $2,324 a month now. Our unit is considered the highest upgrade level, and is also a lakefront unit, so we are paying a bit of a premium for that.

We have a two-bedroom/two-bathroom unit. We also have a large kitchen with an island, semi-walk-in pantry and built-in desk, a dining room, in-unit laundry, a screened patio and eight good-sized closets.

I have to say, it’s the nicest apartment I’ve ever lived in! 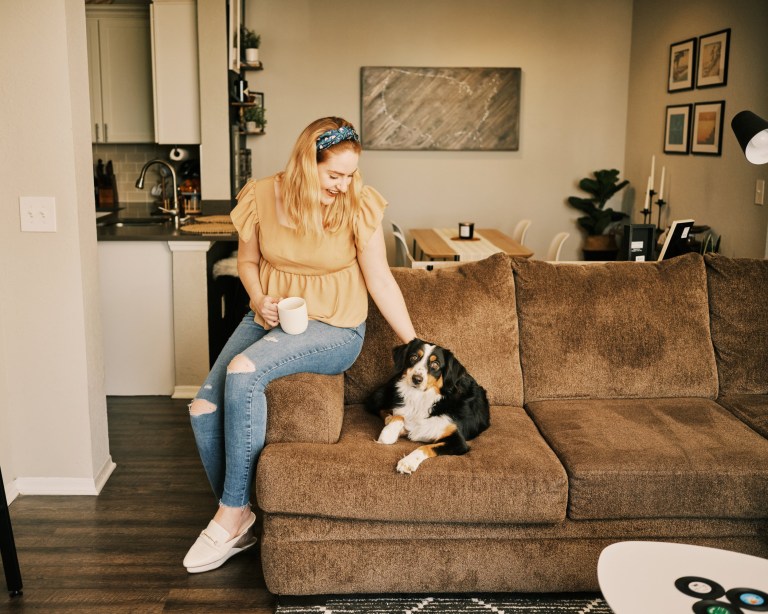 Do you feel like you have a good deal?

I think the market is definitely inflated right now and we’re not getting as good a deal as we would otherwise, but compared to other properties in the area with similar units, I think we are paying a fair price.

Our rent didn’t go up as much as we feared, so we are very happy about that!

Whereabouts do you live? What do you think of the area?

I live in St. Petersburg, FL, which is right next door to Tampa, FL. It’s pretty much in the middle of the state along the Gulf Coast.

I’ve lived in this area my whole life and definitely have a huge soft spot for it, but I’m not sure I want to stay here forever. I want to live somewhere with real seasons!

It’s also getting crazy expensive here and I’m not sure we’d be able to afford it long term. 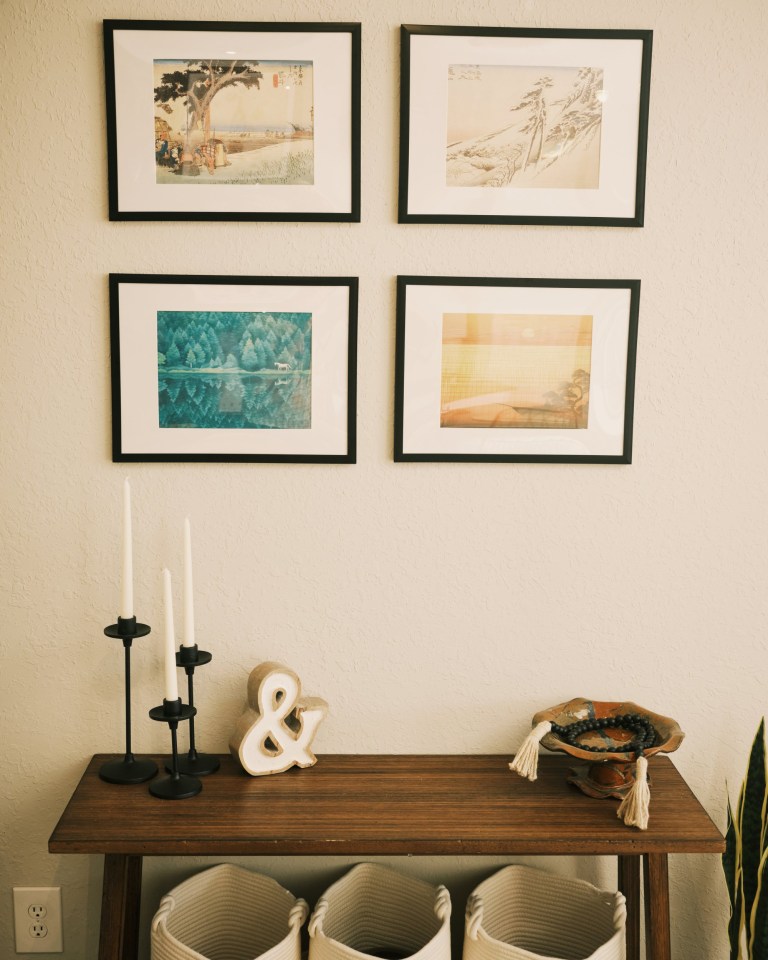 How did you find this property?

We used to live across the street in a tiny condo that Tyler rented from a private owner. When we had officially outgrown the space, we started looking at surrounding properties because we liked the area and wanted to stay close by.

This was the first property we toured and we fell in love. It’s not perfect, as rentals rarely are, but the location and the amenities sold us.

This property has a fenced in turf dog park that is open 24/7, which really comes in handy with a feisty mini Aussie!

How have you made the apartment feel like home?

Oh gosh, how haven’t I? I am always doing projects!

I’ve also hung a bunch of art, and lots of wall shelves. I love utilizing vertical space, especially because we have high ceilings here and I want to showcase that.

Other than that, it’s really been a lot of late night Amazon purchases and thrift finds. And lots of fake plants because I have a black thumb! 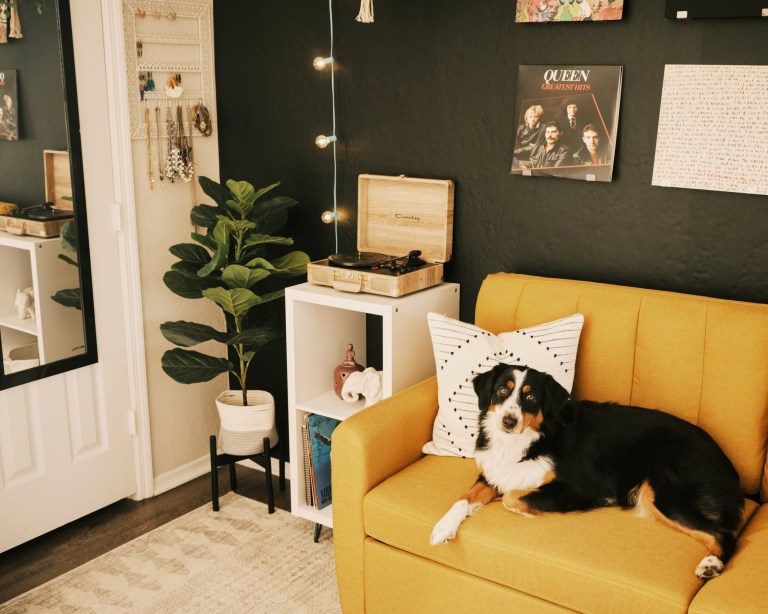 She’s worried she might soon be priced out of the area (Picture: Zack Wittam/Metro.co.uk)

Has it been tricky decorating the space, as it’s a rental? Has your landlord been okay with you making changes?

It can definitely be frustrating trying to design a space when you’re a renter. Not being able to materially alter the unit limits your possibilities and forces you to really get creative.

I haven’t asked my management company for permission to do the things I’ve done so far, but I know what I’ve done hasn’t caused any lasting damage aside from some holes that will need to be filled when we move out, which is allowed per our lease.

I think being a renter has allowed me to expand my range as a hobbyist designer and DIY-er. I love coming up with hacks and ways to transform a space without breaking the rules!

Yes and no. I have actually been on a real organizing kick lately because I feel like the issue here is not lack of space but lack of efficient use of space.

After all, we have eight closets not including our pantry, including two huge walk-in closets, as well as ample cabinet space in both the kitchen and bathrooms.

We really just have too much stuff! I’ve been working on purging unused items and reorganizing to make our storage space as effective as possible. I’m learning that what your spaces look like behind closed doors is just as important as what everyone sees out in the open! 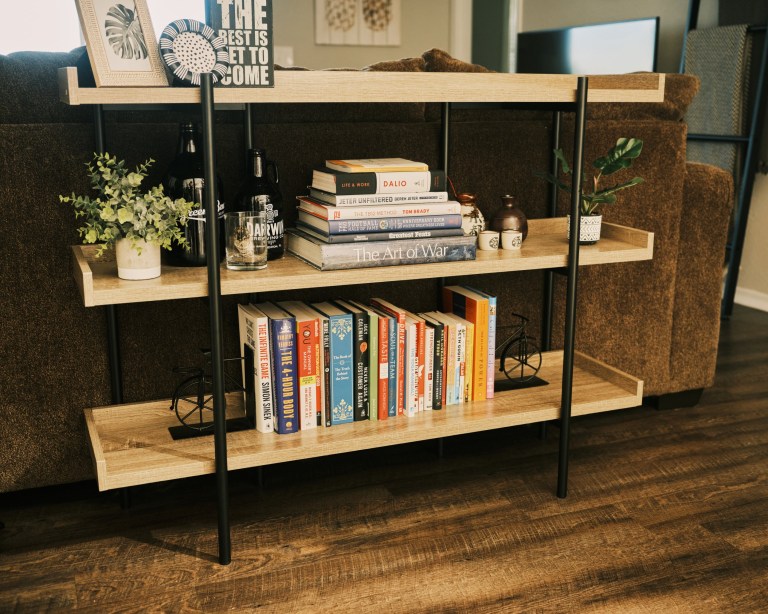 Chelsea reckons that the restrictions of renting have made her a more creative DIY-er (Picture: Zack Wittam/Metro.co.uk)

Are there any problems with the apartment?

The only issues we have are very minor.

We have a washer and dryer but they aren’t very efficient and we have suspicions that the washer doesn’t always drain completely because it will sometimes smell a bit mildewy.

We have a couple cabinet baseboards coming loose and our toilet in the master bathroom is slow to flush, but that’s really it! We’ve been very lucky.

We just re-signed our lease this month, so we’ll be here for at least another year. After that, I’m not really sure what our plans will be.

I don’t think we want to keep paying this much a month on living expenses if we can avoid it. I know we’d love to buy a house but we’re waiting for the market to calm down before we take that leap.

We may consider moving to the suburbs closer to family after our lease is up here.

And what about buying a place?

We definitely want to own someday! We’re just not quite sure what that will look like yet.

We want to sort out our financials first and figure out what we can realistically afford, and where we want to really put down roots.

I’m excited for the future and what it will bring, but for now I’m content with renting and making the most of it!

Fair play! Shall we take a look around? 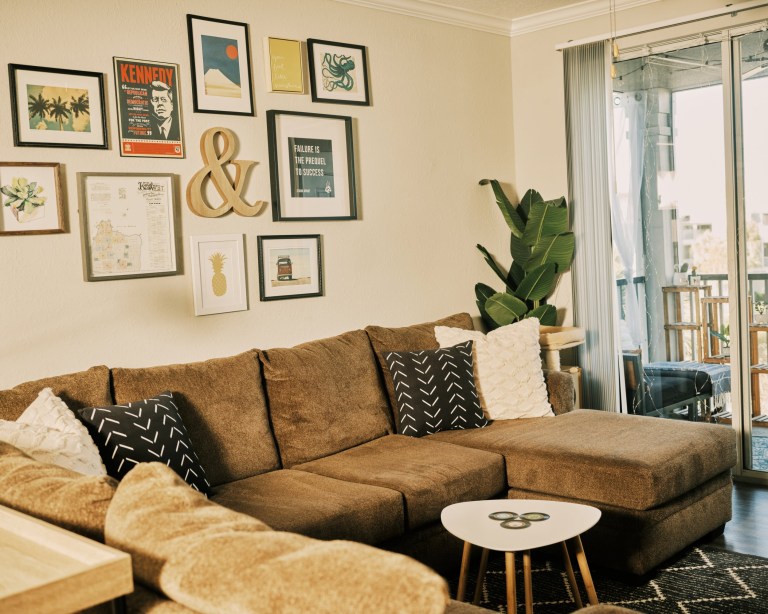 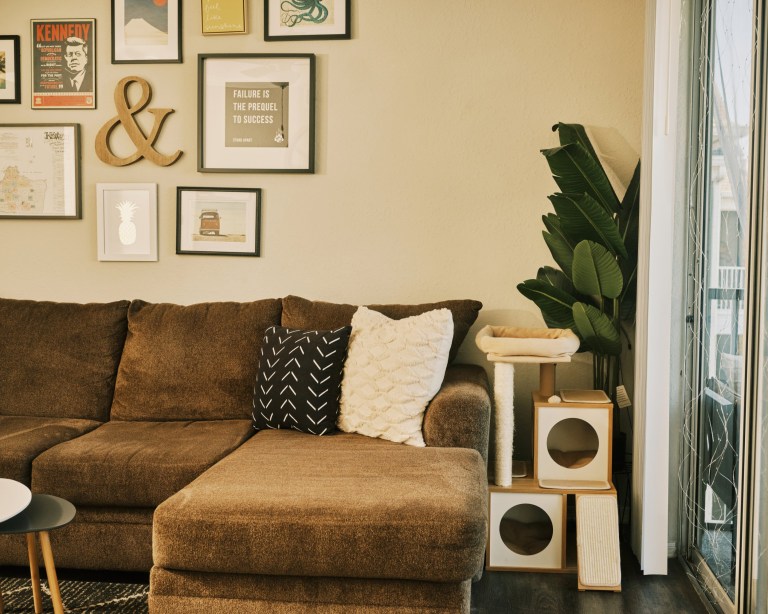 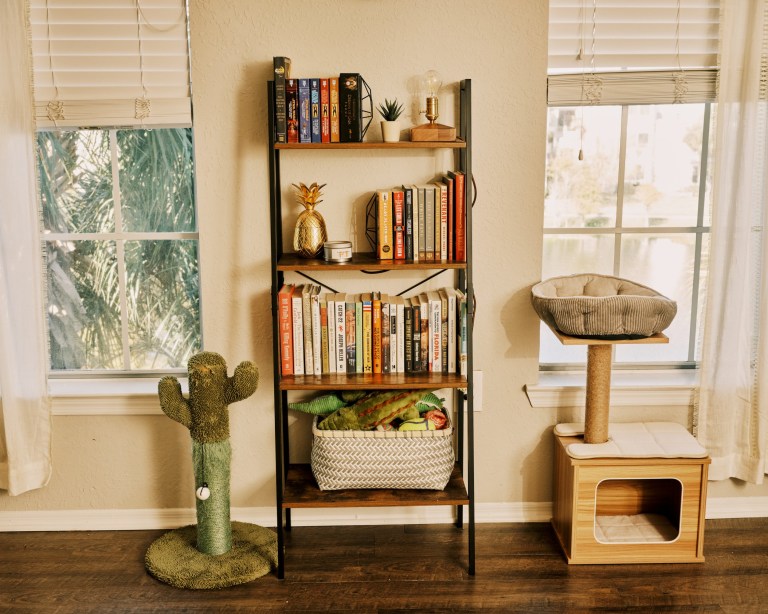 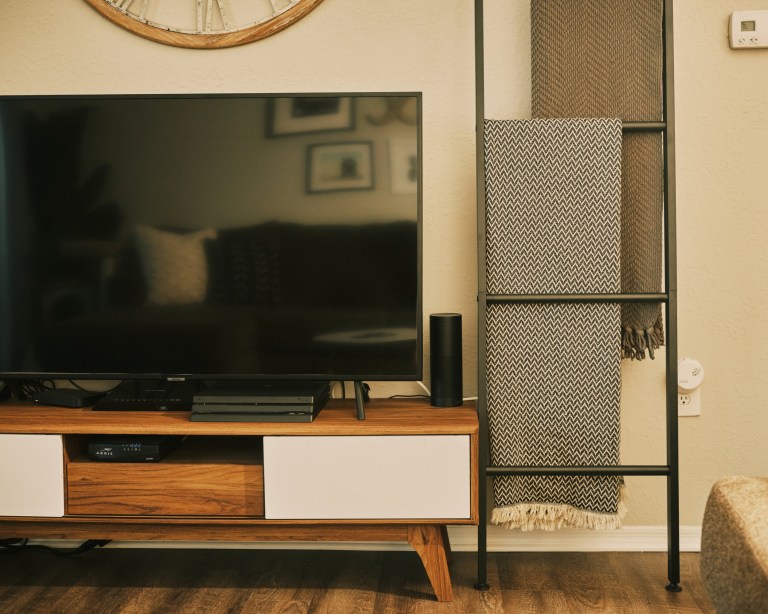 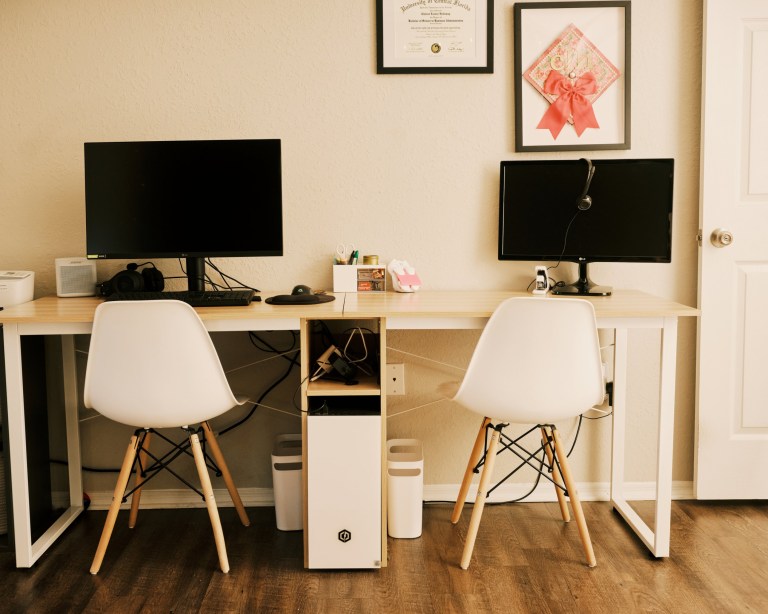 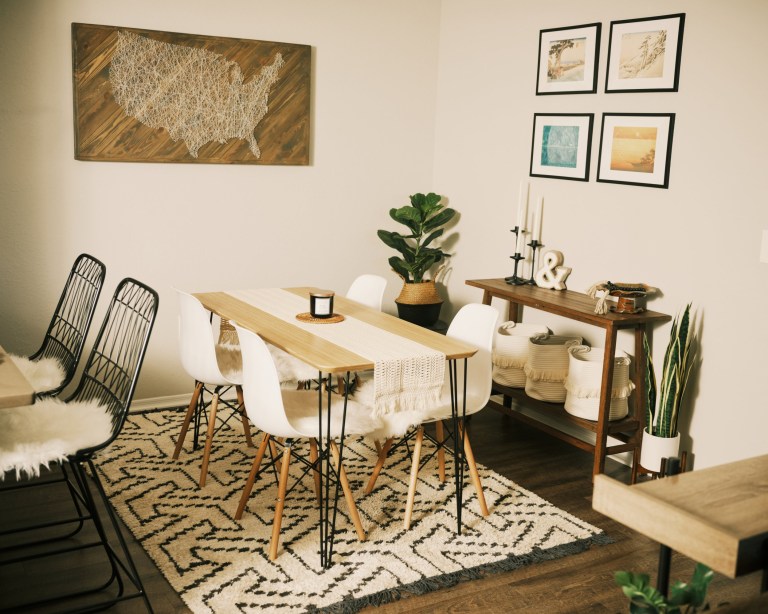 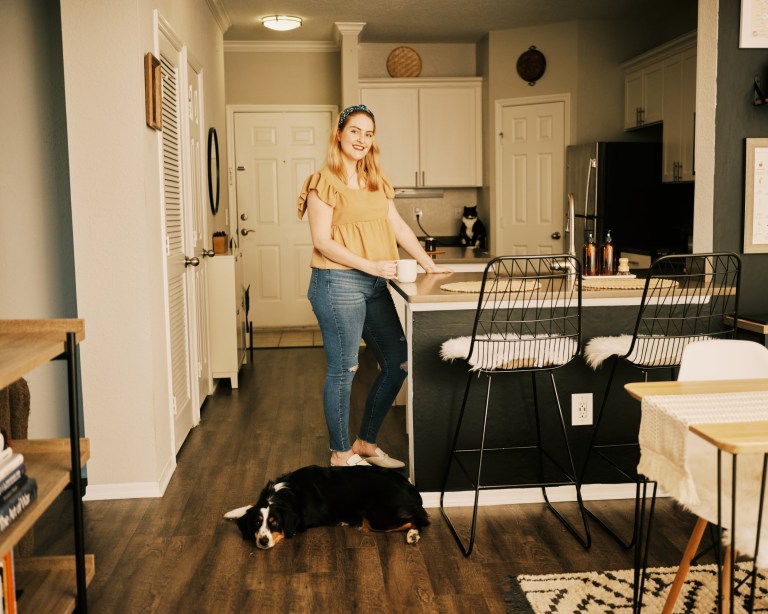 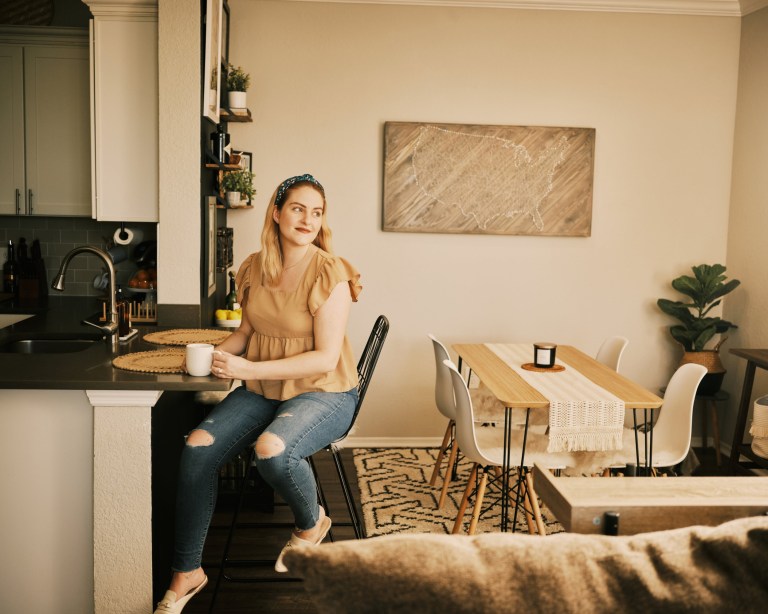 Chelsea says any problems with the apartment are minor (Picture: Zack Wittam/Metro.co.uk) 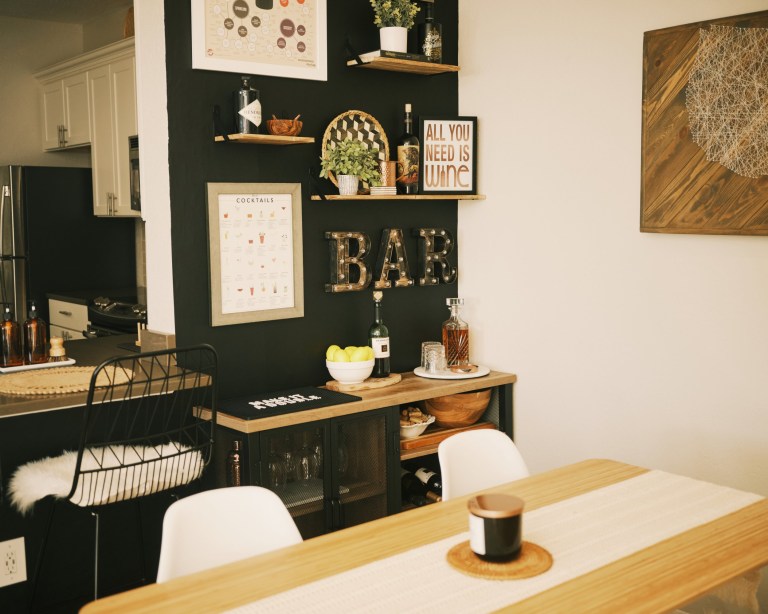 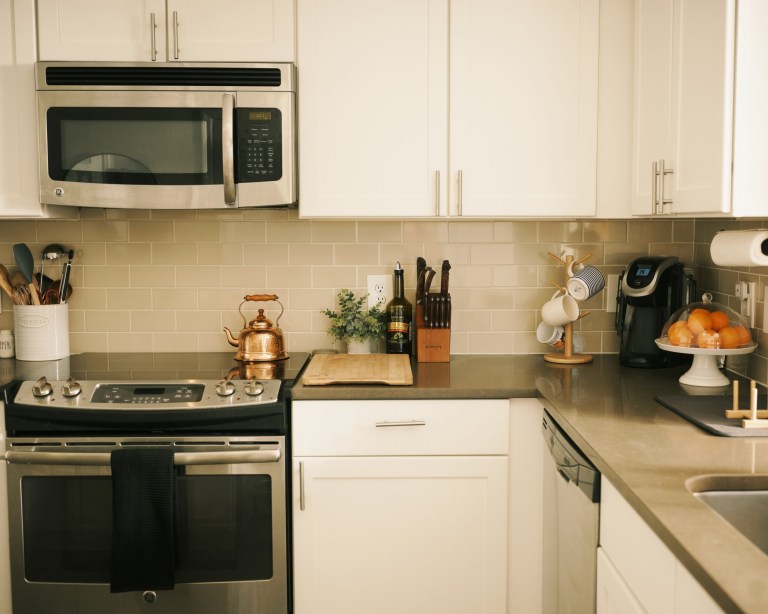 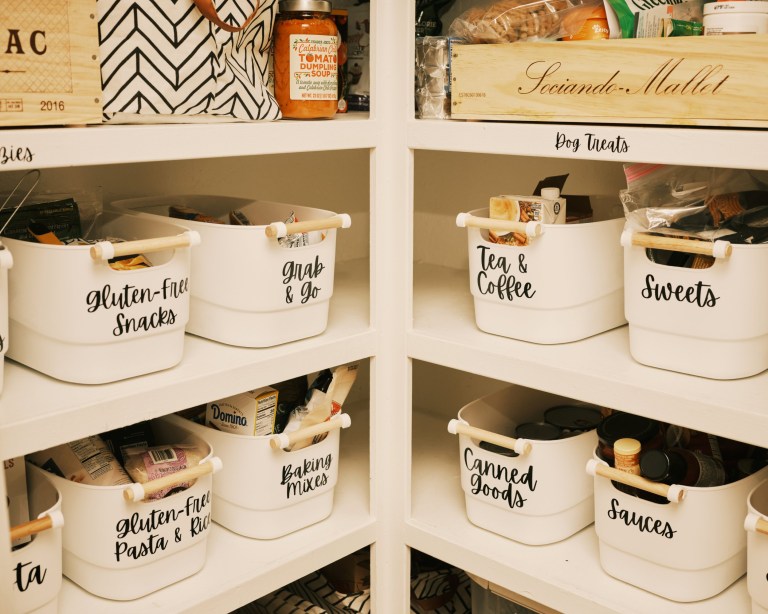 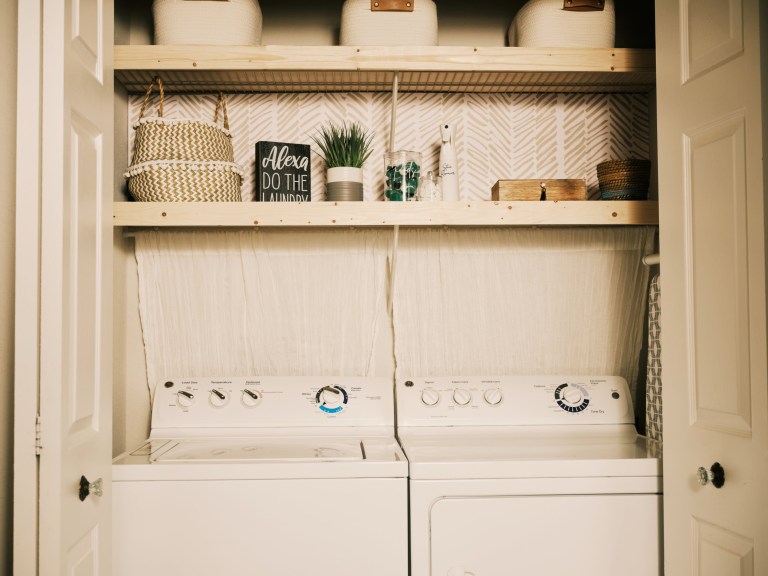 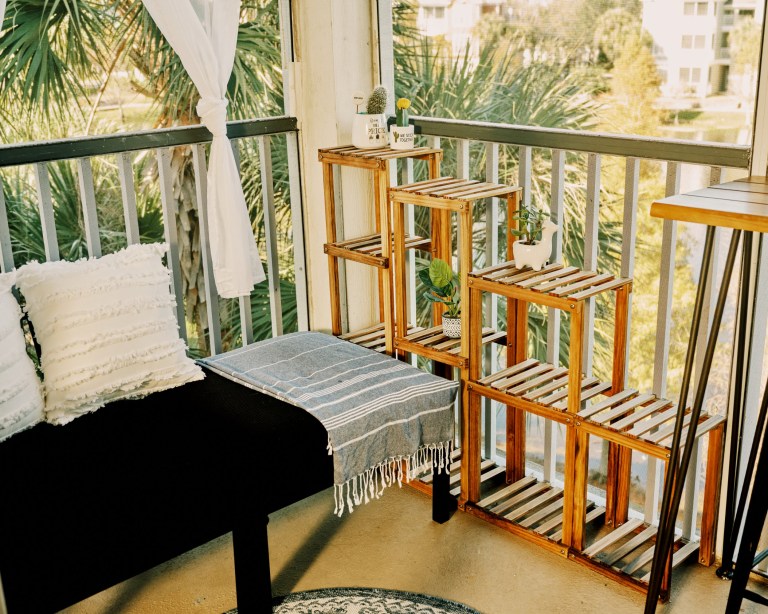 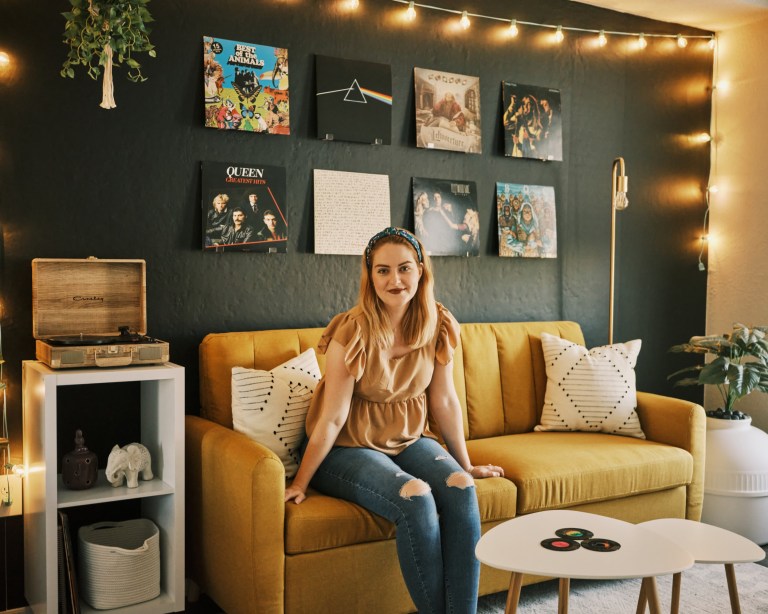 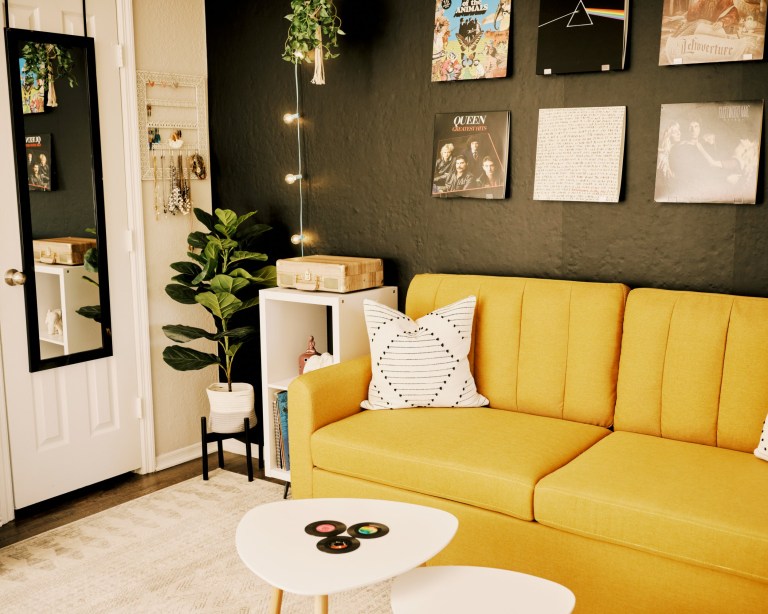 Can you tell this couple are into their music? (Picture: Zack Wittam/Metro.co.uk) 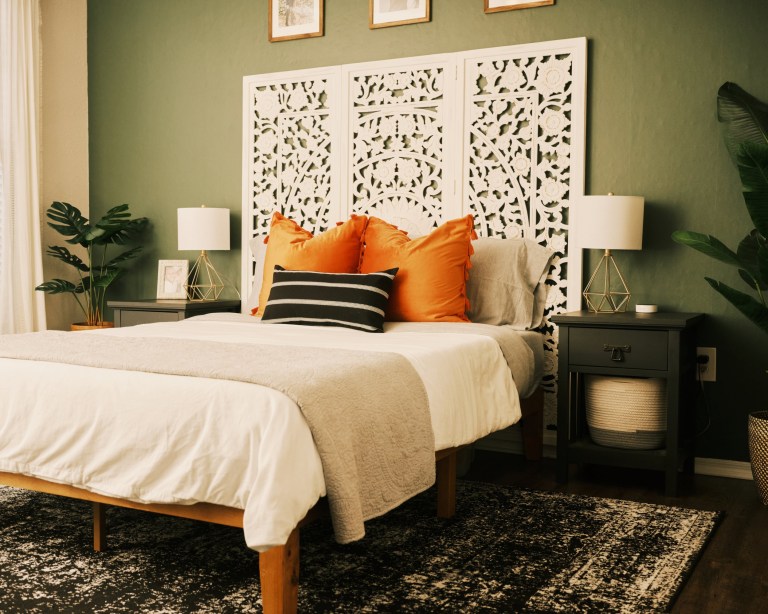 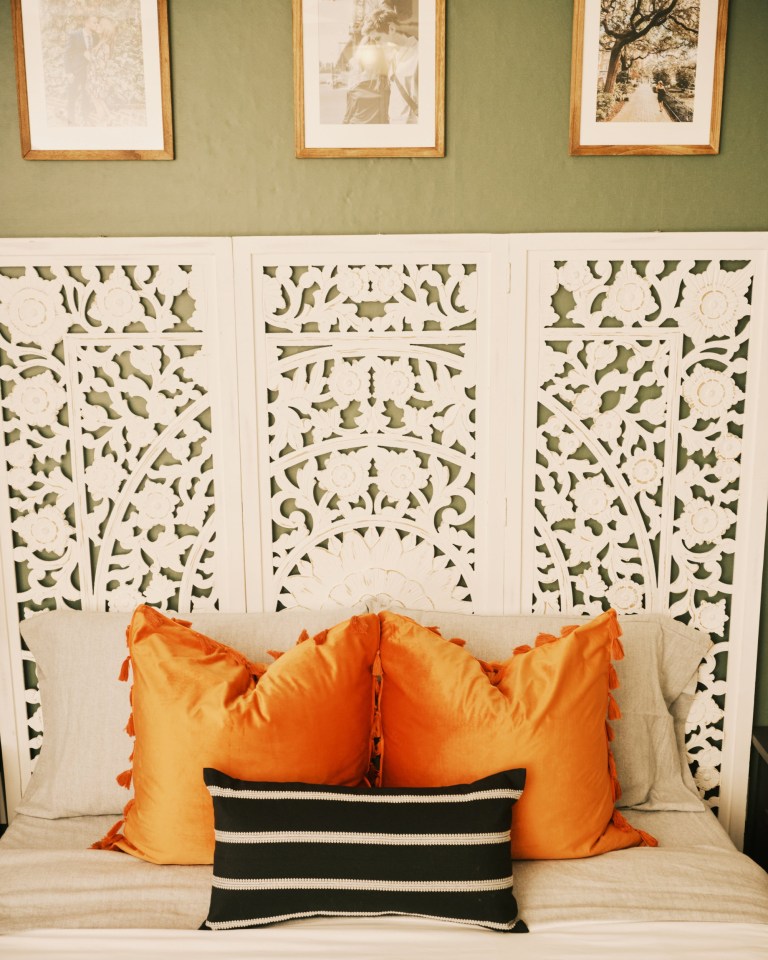 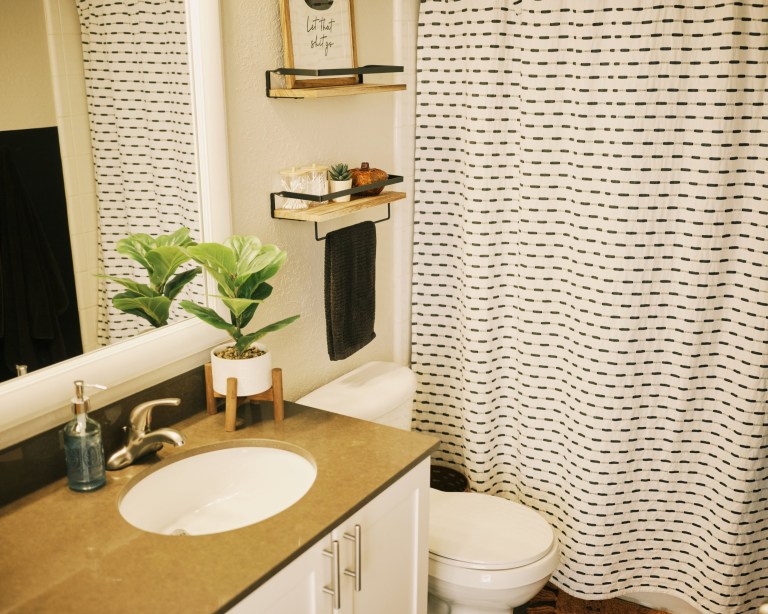 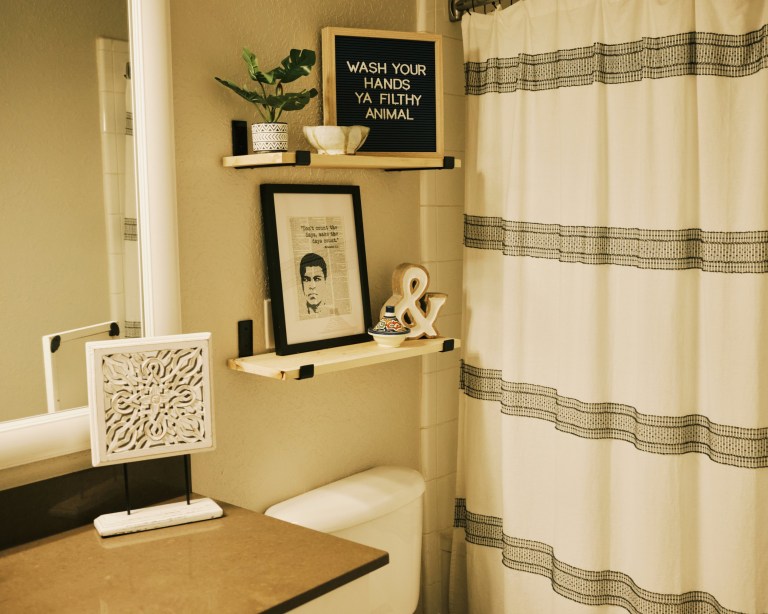 An important note on the letterboard (Picture: Zack Wittam/Metro.co.uk) 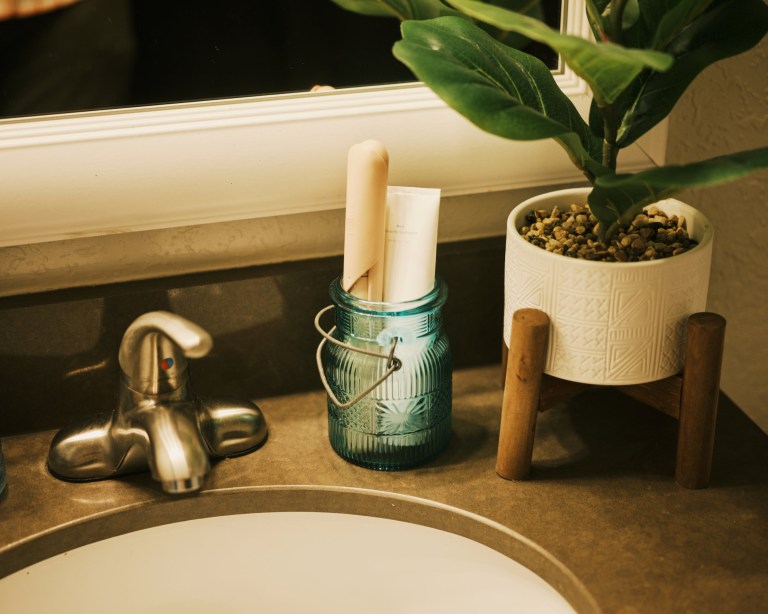 What is half board in hotels and what does full board mean? 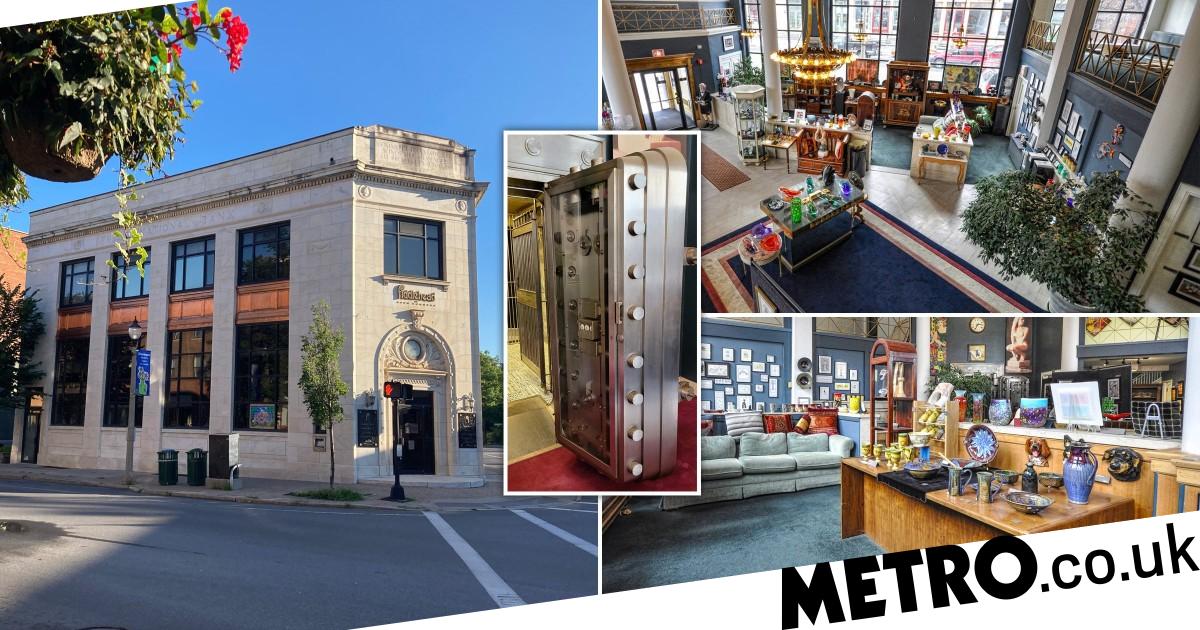