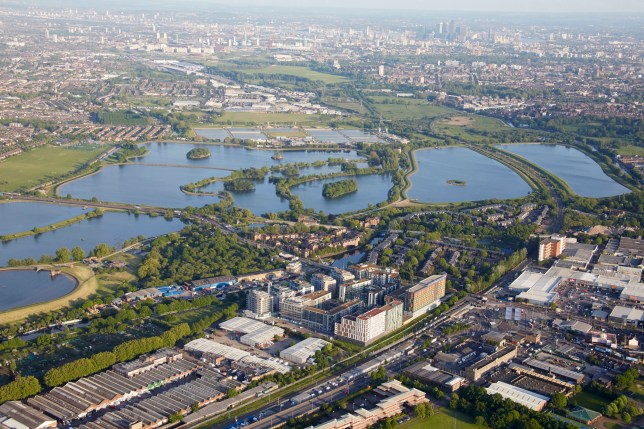 Yes, it really is possible to buy a house in London (Picture: Getty Images)

We all know that London is a notoriously expensive place to buy.

But there are some lesser known corners of the capital where you will get a lot more for your money.

With new developments and regeneration projects underway, first-time buyers will soon flocking to these up-and-coming neighbourhoods.

And if you want to get ahead of the crowd, we’ve selected the best new-builds to buy in each area. 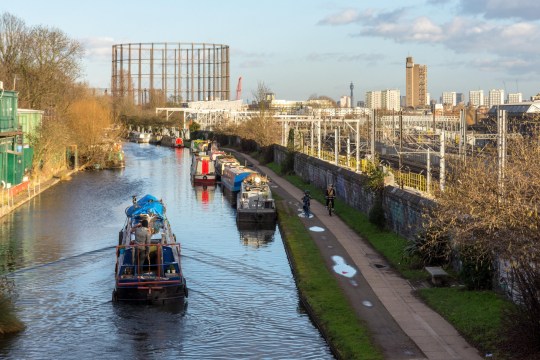 The new station at Old Oak Common will be the only HS2, Crossrail and Great Western interchange, but you don’t have to be a trainspotter to appreciate the merits of the area, which is part of the UK’s largest regeneration project and will deliver more than 25,000 new homes.

According to a report by New London Architecture, it could do for west London what the Olympics did for east — so why not get in at the start? 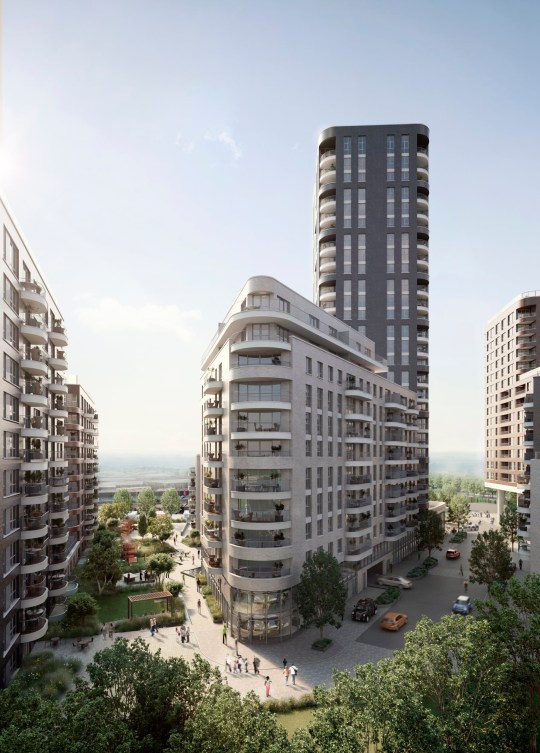 A collection of two-bed shared ownership apartments with good-sized balconies, in a variety of different layouts. The development will have a concierge, café and zones for working and relaxation. site-sales.co.uk 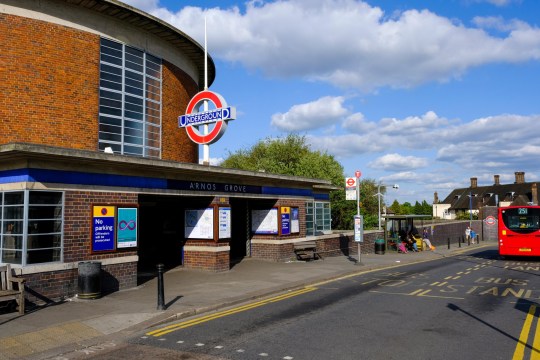 Arnos Grove sits at the southern end of the leafy borough of Enfield, and boasts two lovely parks to unwind in.

Even if you’ve never set foot here before, you might well recognise the Grade II*-listed station, widely regarded as a particularly fine example of Modernist architecture.

Aesthetics aside, the Piccadilly line will whisk you into King’s Cross in less than 20 minutes, there’s another station at New Southgate, and it nudges the North Circular. 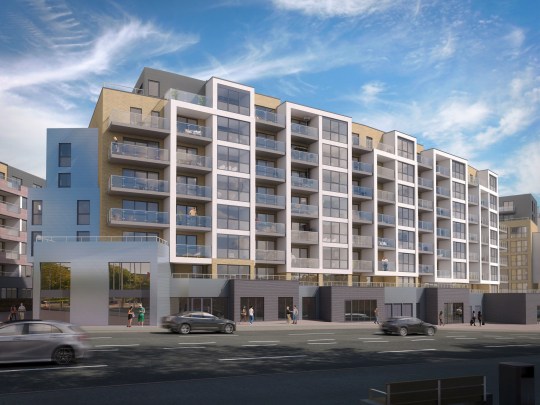 One, two and three-bed shared ownership apartments, each featuring a bright open-plan kitchen/living/dining space opening on to a balcony or terrace.

The station’s a short walk away. site-sales.co.uk 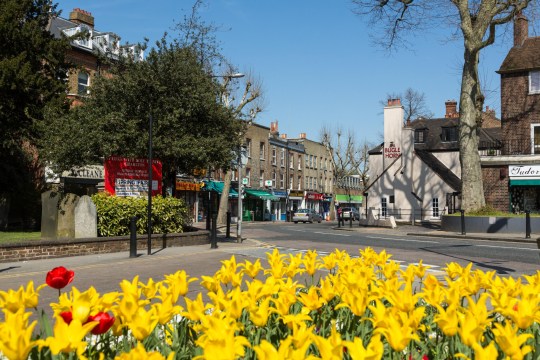 Around 7,500 new homes, together with shops, schools, restaurants and a riverbus pier, are being created on a brownfield site at Charlton Riverside, about a mile from Greenwich Market.

Trains from nearby Charlton station will get you into London Bridge in just 15 minutes, and research from CBRE suggests that buying on the brink of regeneration is a wise investment as once work becomes established, property prices will increase by 3.6% per year. 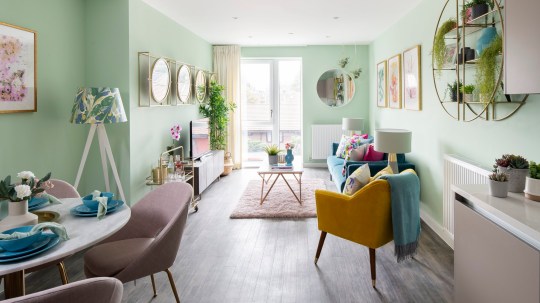 These roomy one, two and three-bed shared ownership apartments all include a private balcony — the top-rated feature for London buyers according to a recent report by Share to Buy and Peabody. 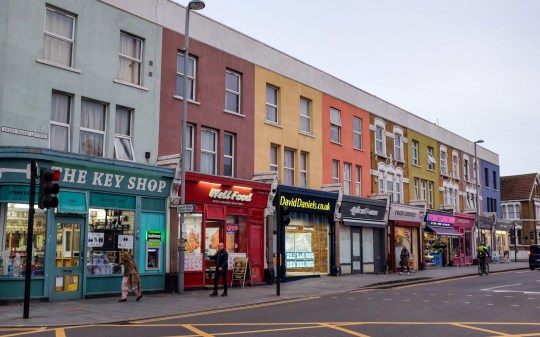 Connectivity via its Central Line and Overground stations, proximity to Stratford and Epping Forest and the villagey vibe along Francis Road are all contributing to Leyton’s popularity with buyers who want to live in east London but lack the budget for a home in a more established hipster haunt.

It also sits within the innovative Mini-Holland scheme where locals are encouraged to walk or cycle rather than drive. 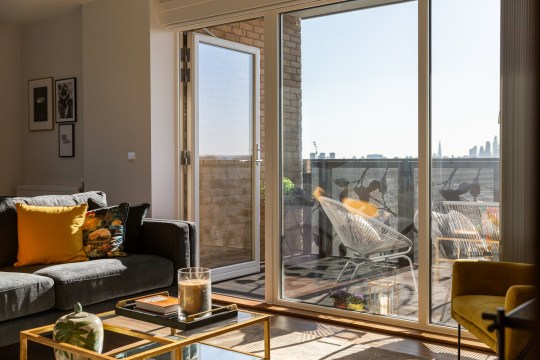 Only a few flats are left

Leyton Tube station is a ten-minute walk from this development, where only a few two and three-bed shared ownership apartments remain.

Each has a balcony and a utility cupboard housing a washer/dryer. Most include parking. newlonliving.co.uk 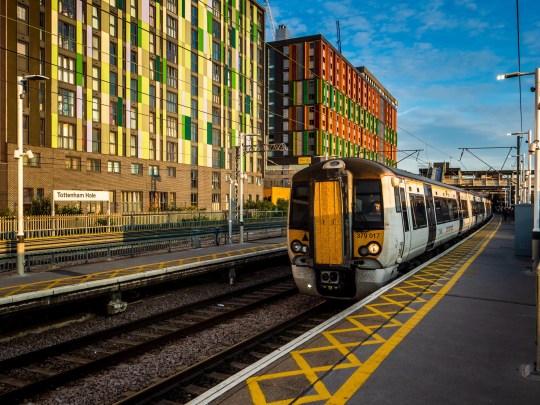 Tottenham Hale is getting a makeover thanks to Crossrail (Picture: Alamy Stock Photo)

Transport connections are a major asset of this north London neighbourhood, which is undergoing extensive redevelopment.

It’s on the proposed Crossrail 2 route and the station — on the Victoria and Liverpool Street to Stansted Airport lines — is currently getting a makeover.

Some 5,000 new homes are being delivered, and more than 1,000 of these are in the lively new centre, set around a public square with shops, independent cafés, bars, restaurants and a cinema. 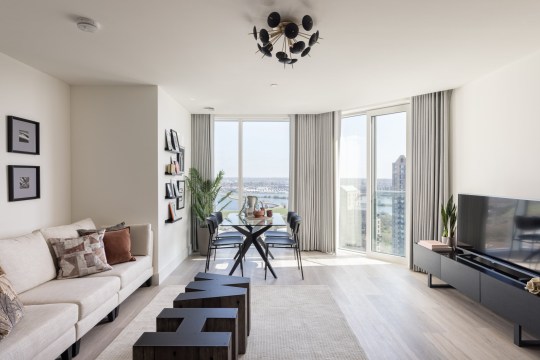 Studio, one and two-bed apartments with open-plan layouts, a 24-hour concierge, a communal sky lounge and gardens, and only a two-minute walk from the station.

London Help to Buy is available, via sharetobuy.com 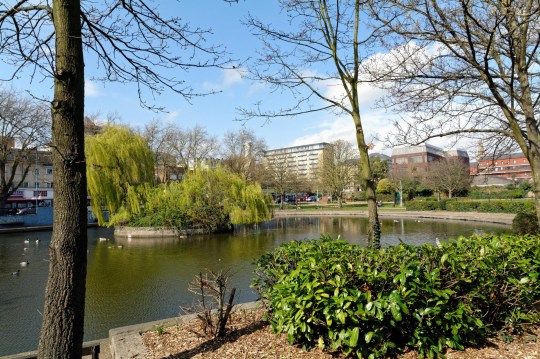 One of four towns in the London Borough of Hounslow earmarked for regeneration (the others are Brentford, Chiswick and Hounslow), over the next 15 years, Feltham is set to benefit from better shops and leisure facilities, upgraded transport links and new housing.

There is an impressive amount of open space, and even the parks have their own masterplan, focusing on improvements that will inspire residents to become more active. Heathrow is less than two miles away, and there are regular trains into Waterloo. 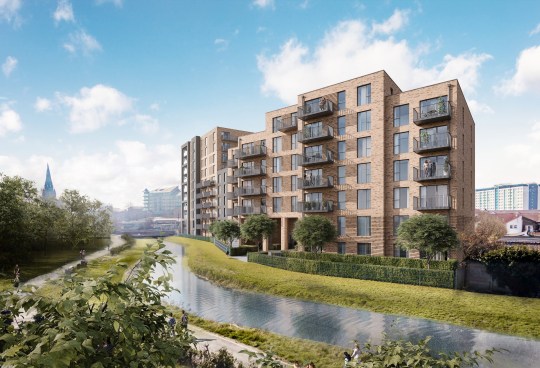 Minutes from Feltham station, these one and two-bed shared ownership apartments are in a quiet spot overlooking a river, and come with a balcony or terrace to make the most of the view. networkhomessales.co.uk 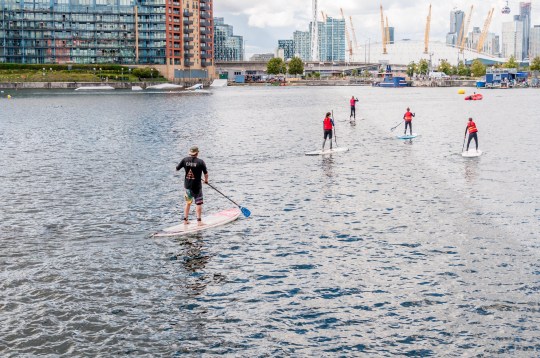 Once the world’s largest enclosed docks, this waterfront district is being given a new lease of life and reinventing itself as a new business, entertainment and residential destination.

You’ll never be stuck for something to do, with swimming, sailing, a sculpture trail and excellent restaurants on the doorstep. 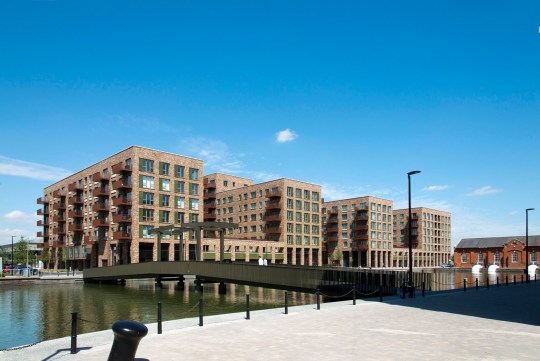 Waterfront flats with a helping hand on the price (Picture: Robert Greshoff Photography)

One-bed shared ownership apartments have recently been launched at Parkside and two-bed homes are also available. Help to Buy is offered on selected plots. nhgsales.com 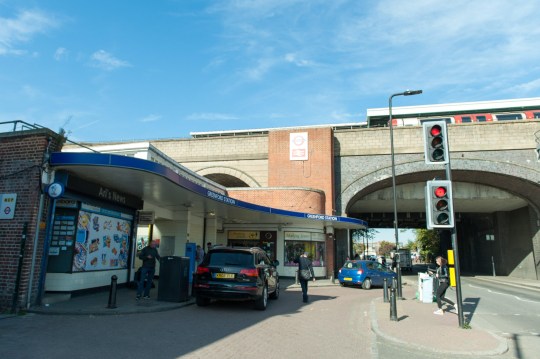 Transport links in this up-and-coming suburb can’t be faulted, as it’s just north of the A40 and close to the North Circular and commuters have the choice of the Central Line or Paddington trains.

It’s located in the northern part of Ealing, one of London’s biggest boroughs — with a young, multi-cultural population — and there’s plenty of room for growth as the average house price is £450,000 compared with £637,000 in the central W5 postcode. 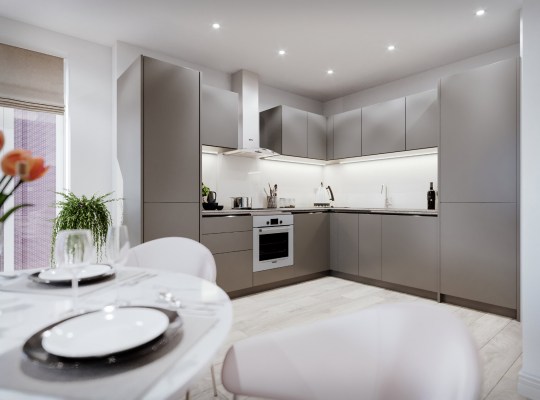 SO Resi apartments are fully kitted out

Unveiled only last weekend, these one, two and three-bed shared ownership apartments are moments from the Tube station and include contemporary kitchens with Smeg appliances and underfloor heating. soresi.co.uk 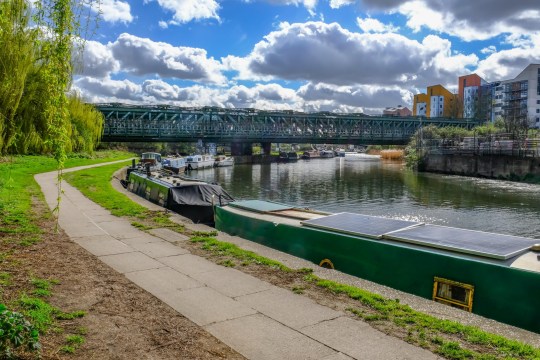 A Zone 2 location, District and Hammersmith & City line services and convenience for the City, Canary Wharf and the Queen Elizabeth Olympic Park are making this area increasingly desirable for home hunters in search of a more affordable alternative to the likes of Dalston or Shoreditch.

It has a similar arty, creative buzz and former warehouses and other industrial buildings dotted along local canal paths have been repurposed as studios and galleries. 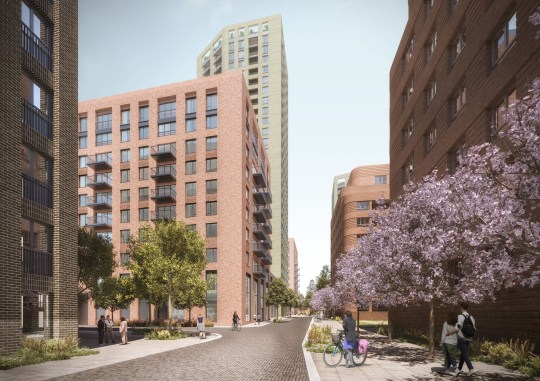 Easy access to the tube makes this development even more attractive

The first 12 one and two-bedroom shared ownership apartments (out of 235) have been launched in a significant regeneration scheme that will consist of 900 homes and have direct access to Bromley-by-Bow Tube station. guinnesshomes.co.uk 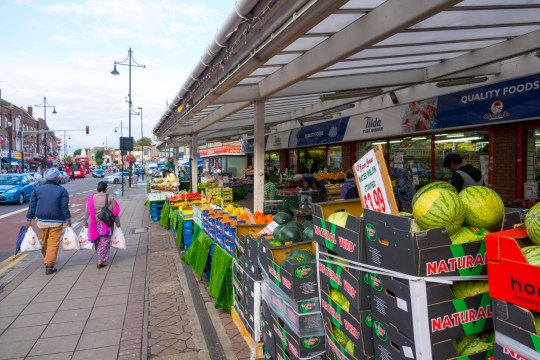 It is great to see Southall’s main drag, Southall Broadway, fizzing with energy once again now that lockdown’s lifting, and it is almost impossible not to be charmed by its exuberance and fantastic selection of curry houses.

Competitive property prices and excellent rail and road links enhance its appeal to buyers, and Crossrail will significantly reduce commuting time into the West End and City.

Extensive regeneration is currently underway and more than 6,000 homes are being built. 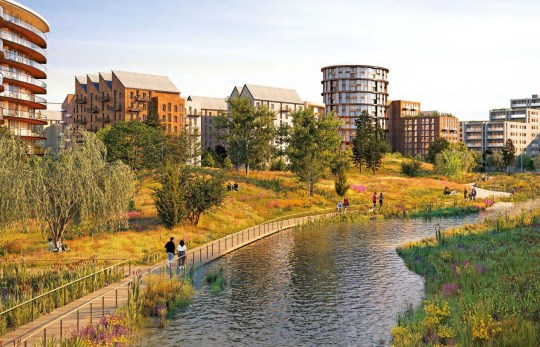 One and two-bed shared ownership apartments from Clarion, form part of a large regeneration scheme.