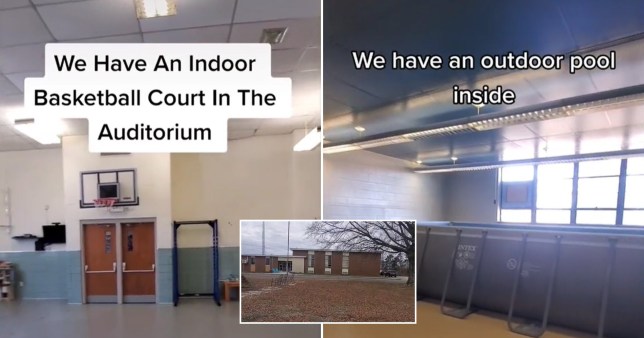 This family has a basketball court, an indoor pool, playground and more in their hime (Picture: @riley.lh)

Being at school out of hours is an uncanny experience – and for one teenager, there is no escaping the feeling.

Riley Hansen, a 15-year-old from America, lives in a primary school after his family bought the building.

The teenager showed what it’s like living in the elementary school which boasts an indoor pool, a basketball court, a playground, and ‘two of everything’.

For example, there are two sinks, two toilets and two showers in every bathroom, and two washing machines and dryers.

Each of the former classrooms have been turned into bedrooms where some of them have TVs that can be rotated in the wall to face either bedroom.

Riley’s sister’s bed is elevated while the space under her bed is used as closet.

The roof – which is all flat – is decorated with lights and used as a space to hang out as a family during warmer weather.

The teen said his family bought the property four years ago and have not renovated it so many of the old school’s features remain.

Due to popular demand, Riley posted a follow-up video showing some other cool features in his home.

The second video also had lots of interest as more than 18 million people tuned in.

Riley was asked about the negative side to living in such a huge school.

He told followers: ‘Its sheer size is both a pro and con. Because it’s so big, we have a lot of cleaning and a lot of maintenance and it’s simply just a lot of walking.

‘Also because it’s so big, we don’t use the whole building, we just clean individual rooms.’ 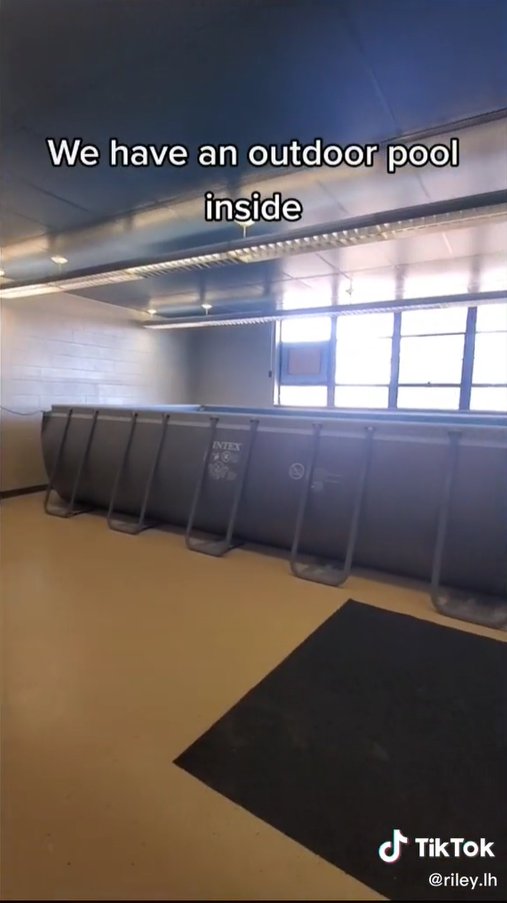 The family has an outdoor pool inside (Picture: @riley.lh)

Of course, there are lots of perks too. Hide and seek, says Riley, is super fun.

But probably not as fun when someone asks you to do a quick favour for them.