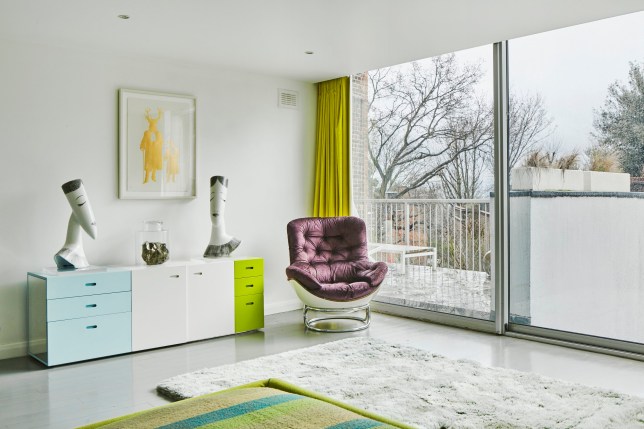 The old coach house has been remodelled into an ultra modern family home (Picture: The Modern House)

Peter Veash’s love affair with his converted coach house in Highgate, north London, began years before he had set foot inside it.

Now 43, the digital entrepreneur was living in a flat just across the road and would lust after the atmospheric period building in Hornsey Lane as he drove past it each day.

‘I was completely fascinated by it,’ says Peter, who was recently voted the most influential person in the digital industry.

‘Set back behind a cobbled forecourt, with the remnants of the old grey coach doors still in place in the original brickwork, I just thought it looked super-cool.

‘I had never seen the inside, but had always told myself that I would one day buy it.’

He kept an eye on the place, watching for a ‘for sale’ sign until in 2010, he spotted one. He called the estate agent immediately but heard nothing back. 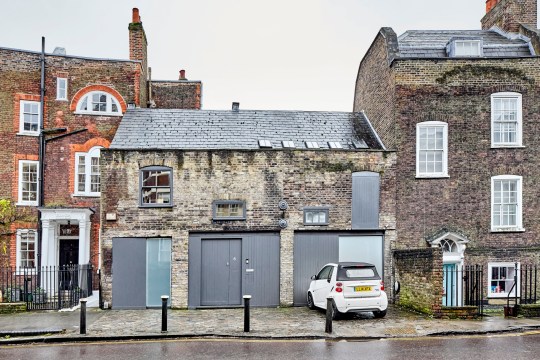 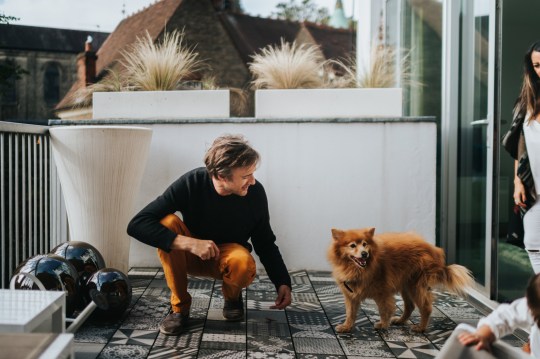 It was only when Peter was on the brink of buying another home that the agent called, inviting him to an open-house showing.

‘I was going to be out of the country on that date, on a stag do. I told the agent I was in Soho but could jump in a taxi there and then and be at the house in 30 minutes… and that I was almost definitely going to buy it.’

True to his word — and to the agent’s astonishment — Peter made an offer on the property, which had once served as a coach house to a grand, neighbouring terrace home,before he had even toured the whole house. ‘It was such a special place,’ he continues. 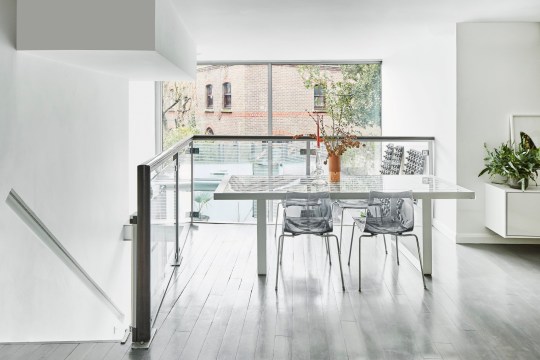 The large windows and glass railings mean light floods into the property (Picture: The Modern House) 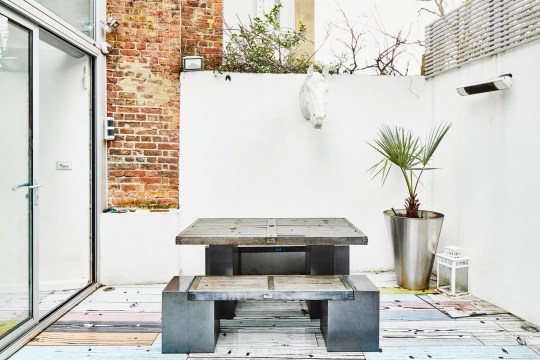 The roof garden has an industrial twist (Picture: The Modern House)

‘There was a garden as well as a roof terrace. And all the hard work of the conversion had already been done, with the addition of the modern glazing and the open-tread steel staircase with glass balustrade.

‘But everything else felt very brown and heavy, as there was lots of dark wood, which didn’t suit the house. I knew immediately what needed to be done.’

Today, the four-storey, four-bedroom 2,200sq ft house, which Peter now shares with his Ecuadorian wife, Ana, their two-year-old son and Philip, their ‘poshie’ — the Pomerian-Shetland sheepdog they rescued as a pup — has been completely overhauled into a bright, futuristic north London retreat.

With a unique decorative scheme dreamed up by the single-minded Peter, it also serves to showcase a formidable contemporary art collection.

‘I always know exactly what I want design-wise and I just love strong colours and bold statements,’ he says. ‘The first thing I did was call in a decorative team to get the background canvas from brown to a white and light grey — and then the fun could really begin.’ 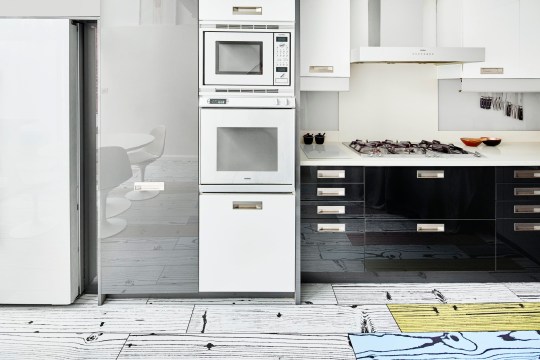 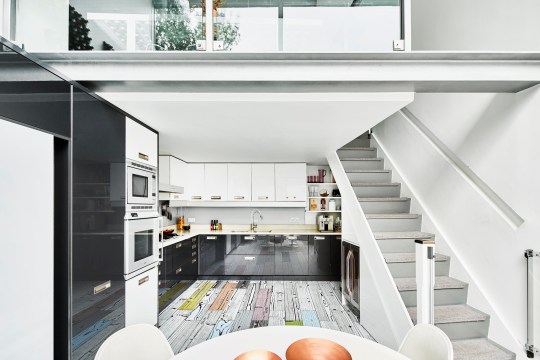 The floor tiles were cleverly designed to look like colourful painted floorboards (Picture: The Modern House)

A passionate cook, Peter started with the kitchen, stripping out the dark wood cabinetry for hand-made, high-gloss, grey-and-white versions, with Gaggenau appliances and a wine fridge.

It’s the floor, however, inspired by a trip to Italy, that is the real showpiece of the kitchen.

Here, clever tiling gives the effect of wooden floorboards, with white and grey ‘planks’ interspersed with others in pastel green, blue, pink and yellow.

To make sure no colours were repeated too closely together, Peter and a designer friend created a spreadsheet and laid it across the floor, extending it out to the private courtyard that leads from the kitchen via huge, glazed sliding doors.

‘The tiler said that in 20 years’ experience, he had never seen anything quite as detailed as this,’ Peter says.

Big design statements, then, are a hallmark of the house, with Peter’s favourite space actually the result of a happy accident.

On the first floor, in the main bedroom suite’s bathroom — on which he spent about £30,000 in all — an emerald green resin floor, Japanese tub for two and intricate bamboo design at the window have turned a functional room into an urban oasis where you could happily spend hours. 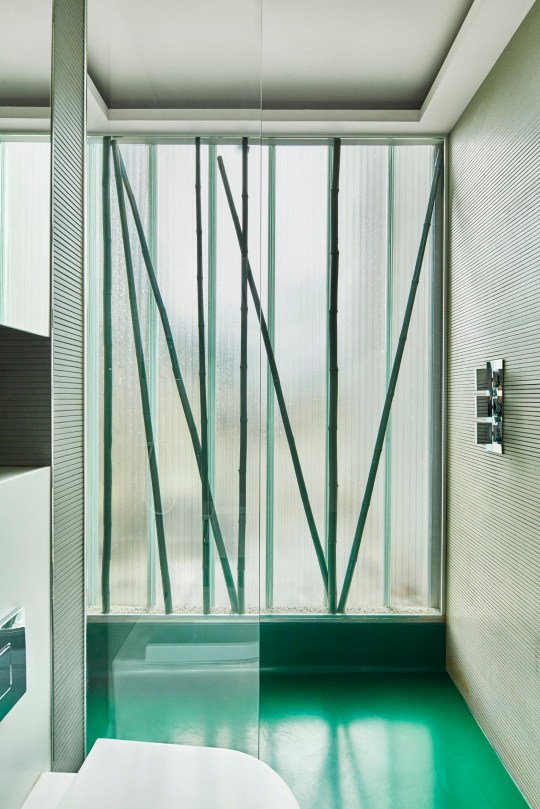 Green resin flooring and bamboo detailing give the bathroom a calming feel (Picture: The Modern House)

‘I initially wanted concrete floors here, but they just didn’t look right,’ he says. ‘A bathroom designer came up with different renders of colour schemes we could use on the floor and one of them had come out wrong, as a really vivid green. I thought it was awesome, so went with that.’ Delicate grey tiling was added to the walls, with the ceiling lowered to let the colour-changing LED lighting create a dreamy, intimate ambience.

Elsewhere, in the main living spaces, including the 23ft by 21ft ground-floor sitting room and the four bedrooms, contemporary furniture, paintings and installations have been used to make the pale walls sing — the result of epic shopping trips in London and New York.

‘This house needed to be brought to life with art, so I went on a buying mission for two or three years to find the right pieces,’ Peter says. ‘I have a very particular view of what is good, but I had to get out and find it.’ 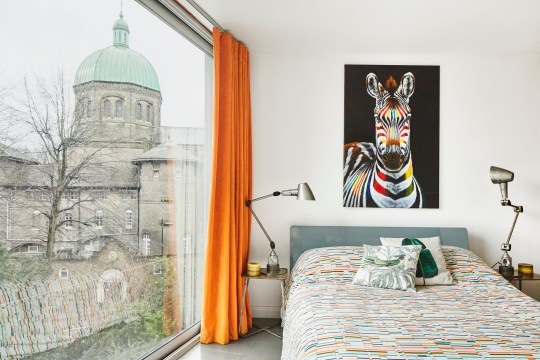 The unpredictable, eclectic collection includes everything from a self-portrait by Nashville-based Cuban artist Darian Rodriguez Mederos, made out of burnt cent pieces, to a large, transparent sculpture of a head with cryptic writing inside, dreamed up by German-born sculptor Oliver Czarnetta.

In the main bedroom, his-and-hers 1960s busts, featuring pencil on china, are by an unknown artist. ‘We bought them in New York, with wedding gift money,’ Peter says. ‘Ana and I felt they represented us as one.’

Sculpture by Paul Vanstone, who worked as an assistant to Anish Kapoor, also features in the home, alongside an installation of multicoloured letters picking out the word ‘RELAX’, made from old American fairground letters bought at liberty.co.uk.

‘It has been such an interesting house to live in and has been great for entertaining, when allowed,’ Peter says. For now, he and his family are waiting out lockdown in Ecuador, where they went at the end of last year to visit Ana’s parents, and are renting a home near the bohemian surf town of Montañita.

They have put the former coach house on the market for £1.95 million and on their return will be upsizing to a contemporary, architect-designed home, also in north London, that has recently been completed.

‘I love the coach house so much, I could never have replicated it elsewhere, so we decided to build from scratch instead,’ Peter says. ‘And when we can travel again, it’s going to be a lot of fun gathering the right artwork for it.’ Cue an international shopping spree or two, then.