It used to look like a rundown shed, but now its a sleek industrial home (Picture: Daniela Exley)

There’s no doubt that creating a dream home requires patience, but not many of us would be quite as persistent as James Watts.

The founder and owner of hip luxury guesthouse business beatnikbreaks.com immediately fell in love with a Georgian mewshouse in Brighton when he walked past it 20 years ago.

Built in 1818, likely as stabling and a carriage house for the palatial homes on Regency Square, just a few minutes from the seafront, it had more recently served as a glassworks, and was a rare example of an industrial building still standing in the area.

‘I had spent many years hunting down weird and wonderful buildings in Brighton,’ says James, originally from Leeds. ‘But this one blew my mind. The history and detail of the building just captured my imagination, and I was determined to convert it into a home.

‘I wanted to investigate exactly how the structure was built, how every part of it worked, and then to draw on a broad palette of materials, suppliers and build techniques to make it the best it could be.’

Eight years ago, James finally managed to get his hands on the by then derelict, flint-fronted three-storey building, buying it from a property developer for around £660,000.

Then, around 18 months ago, he finally started work on its transformation into a multi-textured, industrial-luxe four-bedroom home. 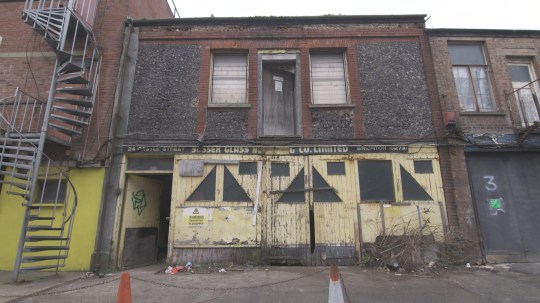 Before: the industrial building was completely run down (Picture: Supplied) 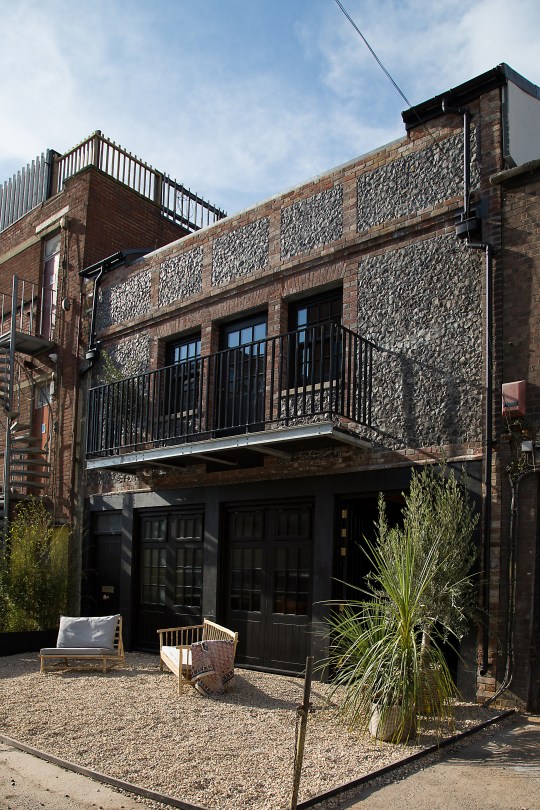 After: the Georgian building has had a total transformation (Picture: Daniela Exley) 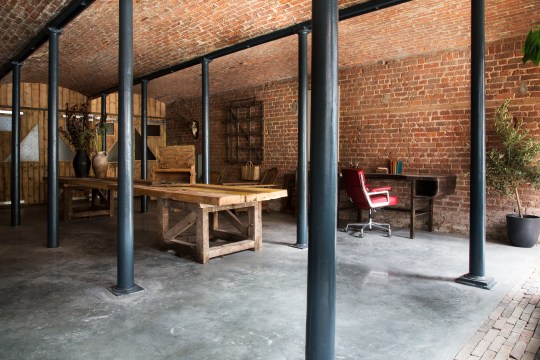 It’s still got an industrial look inside though (Picture: Daniela Exley)

The painstaking build features in the latest series of George Clarke’s Remarkable Renovations, on Channel 4 and All 4, where the host bluntly tells James that you would need a lot more than rose-tinted specs to see the potential in the place.

The dilapidated building was filled with pigeon poo and plants that had taken root, with its upper floors only reached via a ladder propped up against its exterior.

‘But where people saw piles of rubbish, I saw incredible potential,’ says James. ‘There were some big battles along the way, as I had such a clear vision, and people told me it wasn’t possible. But then all those that challenged me became ardent supporters – although some of the work we carried out was very risky.’

Making his vision a reality required a budget of around £650,000, a lot of dawn starts and a commitment ‘to absolutely living and breathing the project,’ James says.

Working with Giles Ings, the award-winning founding director of Hove-based Abir Architects, the local council’s heritage team and a hand-picked group of expert craftsmen, James set about rebuilding the façade, restoring all the external and internal materials and features, dry ice-blasting old wooden beams and even moving a ceiling to create more head room, a gruelling job, which took weeks to complete.

‘I completely rebuilt the front elevation, as an 8 metre-wide lintel that was holding up the building had slipped out of its support and was threatening the building’s very integrity,’ James says. 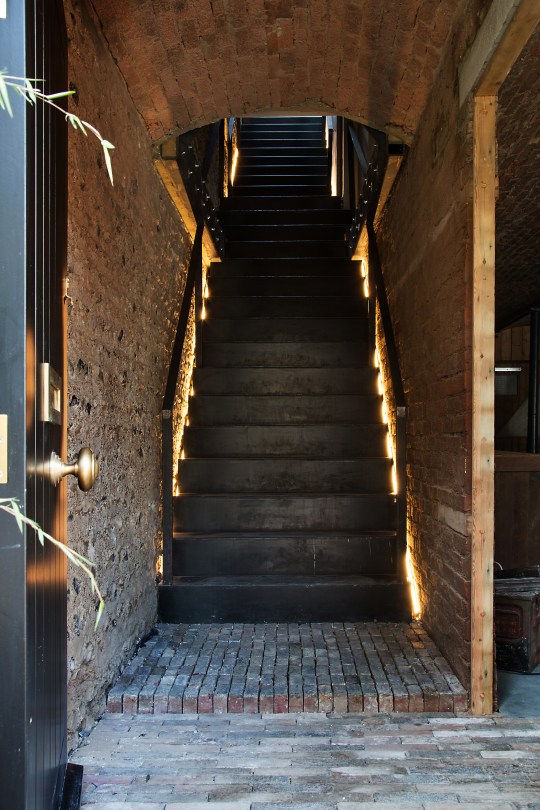 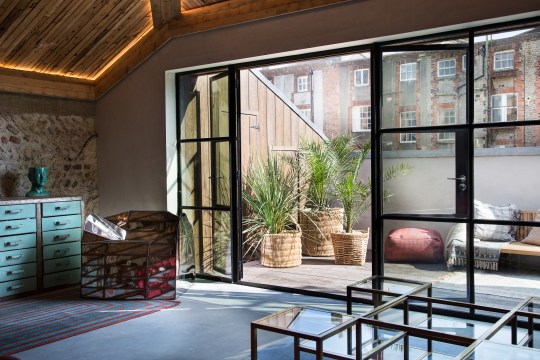 ‘I took off every brick and knapped every piece of flint, and lovingly cleaned up every single original feature that could be saved. I wanted to put it all on display, in homage to the home’s history.’

Today, over 2,630sq ft of internal space, the home’s three storeys have their own unique design identities, united by a jaw droppingly-engineered 1.5 metre-wide staircase, welded out of folding blue steel. Created by Iron Designs, it snakes its way up to the top of the building where it rests under a huge rooflight.

On the ground floor, which has vaulted ceilings, James spent hours cutting hundreds of the original Georgian bricks – made especially thick to withstand the weight of horse-drawn carriages – into halves, so they could cover much of the floor, which is now heated from below.

This space, used as a studio/office, with a state-of-the-art plant room under the stairs, now features the old wooden glass-cutting desk, salvaged from the top floor, sliced down the middle to create a 5.5 metre-long work bench, with the old admin cupboard hung on a wall above it. 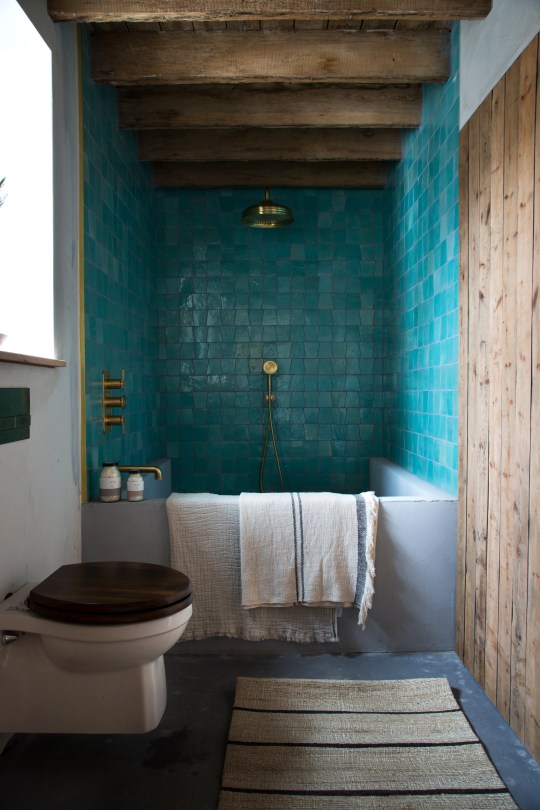 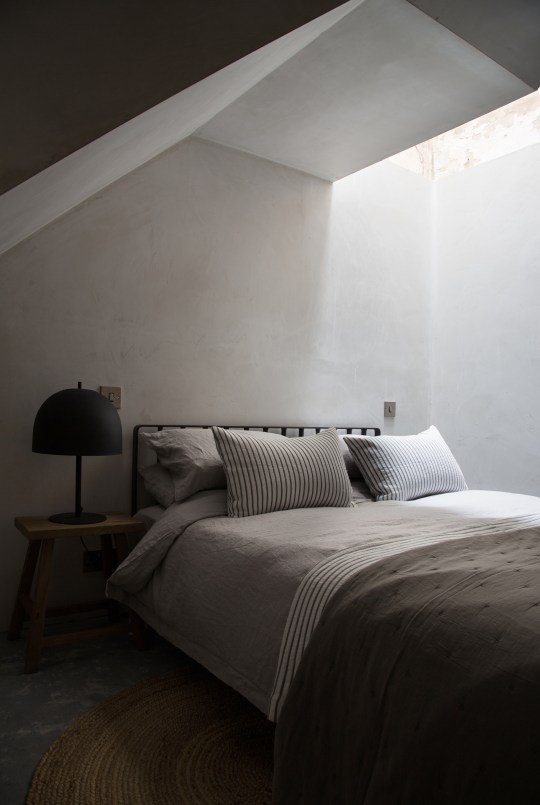 We love the moody lighting in the bedrooms (Picture: Daniela Exley)

‘I wanted to give a new life to everything I found in the building,’ says James. ‘But as I wanted all the floors to have distinct atmospheres, up on the first floor, where the bedrooms are, I focused on a smoother, more luxurious feel.’

The look, he says, was inspired by the Japanese aesthetic values of ‘wabi-sabi’, where subtle imperfections make things perfect and give character. Here, where there are four en-suite bedrooms, walls are covered in a lime-grey gypsum, which contrast with the exposed original floor joists and the walls elsewhere of bungaroosh – a historic material found specifically in Brighton made up of old stone, brick, wood and sand.

The bathrooms are tiled in Moroccan porcelain, with minimalist-style single sheet shower trays and lashings of brass fittings. The main bedroom’s en suite, however, is the most indulgent: for those that don’t want to brave Brighton’s chilly Channel waves, a four-person plunge pool lined in smooth concrete fits four people, neighbouring a hand-built sauna. 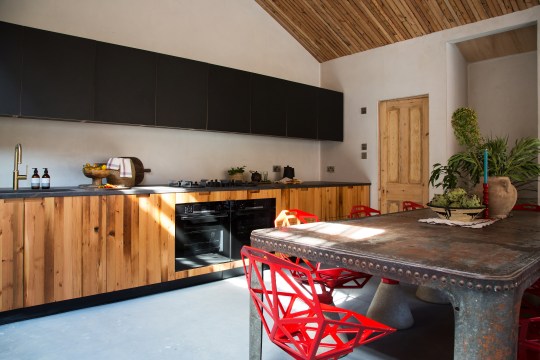 The kitchen cabinets are made from wood reclaimed from the original building (Picture: Daniela Exley) 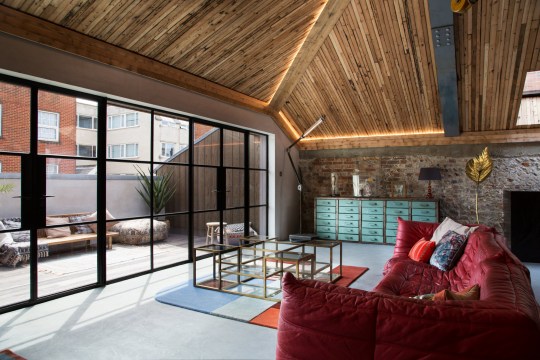 On the top floor – the one in the worst state when James bought the building – the mood changes again, with an embracing, open-plan loft-style layout, battened-timber ceiling beams and a streamlined chef’s kitchen running along the rear of the room.

The addition of a huge roof terrace offers views to the British Airways i360 observation tower, and a contemporary seating area lit for evening cocktails by a maritime-inspired, super-sized Big Steve Bulkhead wall light, by Dowsing & Reynolds.

It’s just one example of how James looked to heritage designs when he needed to install new fixtures and fittings around the home.

Bringing the home bang up to date eco-wise, a mechanical ventilation heat-recovery system cleans the air inside the home.

Incredibly, having completed the back-breaking renovation, James has now put The Glassworks on the market, for £2.5million at Brand Vaughan.

He has a new love in his life, Spanish fashion buyer Eli, who has moved back to her home country to be closer to her family, and he plans to spend more time with her there.

‘I have to think of my relationship, and also recover from the effects of Covid on my business, which meant closing Beatnik Breaks for many months. It’s not easy to let The Glassworks go, having worked so hard on it, and having set my heart on it as my home.’

He says he won’t be ruling out another huge restoration project, though, once he finds the perfect site. ‘First up is a very long holiday in Spain,’ he says. ‘It’s time to sit back and take stock.’

‘I was told this wasn’t possible’