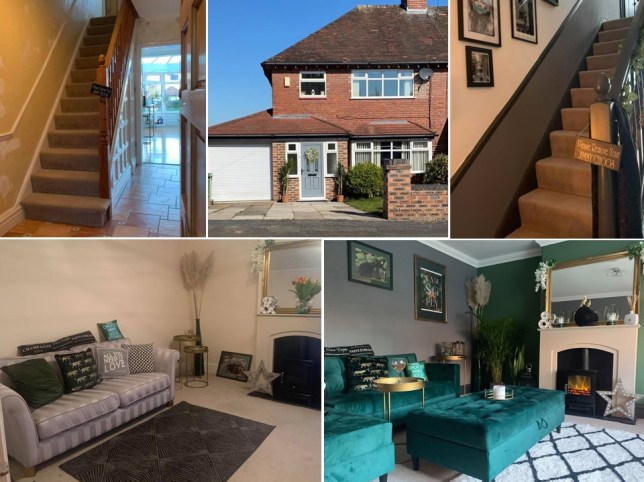 Mum-of-two Victoria worked hard to get her house the way she wanted it (Picture:Jam Press)

A single mum has transformed her ex-council house with a DIY renovation after splitting up with her ex in lockdown – saving herself thousands of pounds in the process.

Mum-of-two Victoria Swindell, from Warrington, England, moved into the house in February with her children Sebastian, 12 and Tristan, 7.

Victoria, 49, had always wanted to live in a waterside home, but wasn’t able to afford a huge house – so decided to take on a fixer-upper.

Victoria, who works as a commercial director in logistics, said: ‘My partner and I split at the very beginning of lockdown which was horrid, and I struggled to find a house during the lockdown.

‘He wanted the big posh house and I wanted a simpler happy yoga waterside life.

‘I opted for low budget and a better lifestyle, so I can save up and buy a boat in the future! 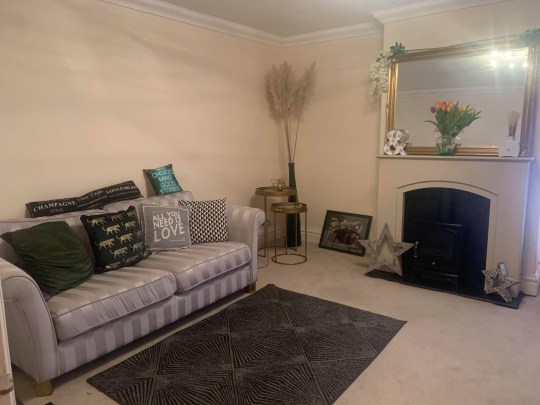 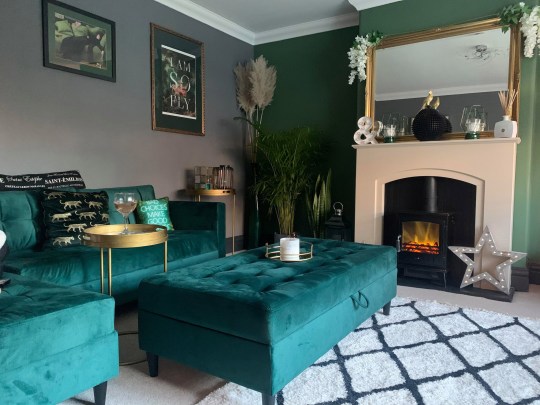 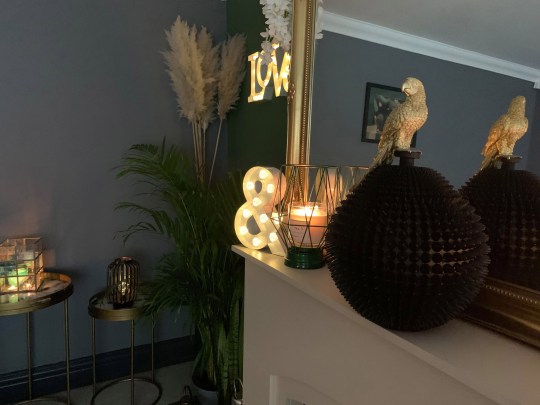 ‘I did an online interior design course when I was put on furlough and that cost me only £15.

‘I moved into the new house 19 February this year and it’s an old ex-council house but with a fabulous garden and I have always dreamed of a water view.

‘The first thing I did was get approval for a private garden mooring.

‘This is my lifestyle house, not a status symbol house. I needed a home for my boys on a small budget in a very expensive area.’

Victoria was able to get her hands on materials on a budget to help keep costs low. 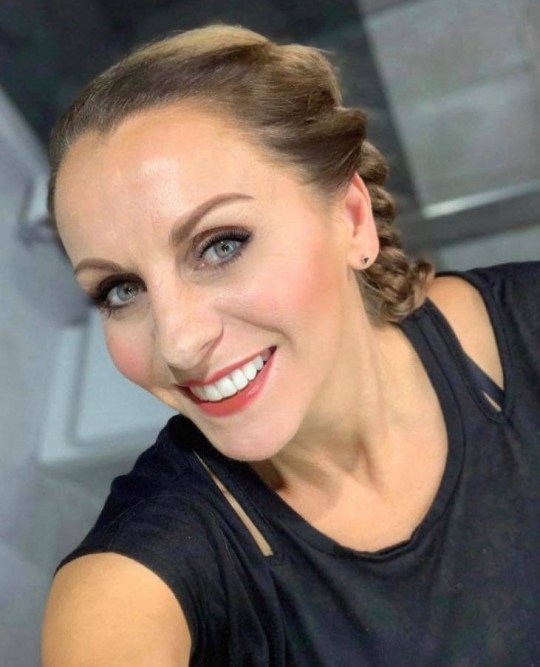 Of her ex, Victoria said: ‘He wanted the big posh house and I wanted a simpler happy yoga waterside life’ (Credits: Jam Press/@canalviews_jimmychoos) 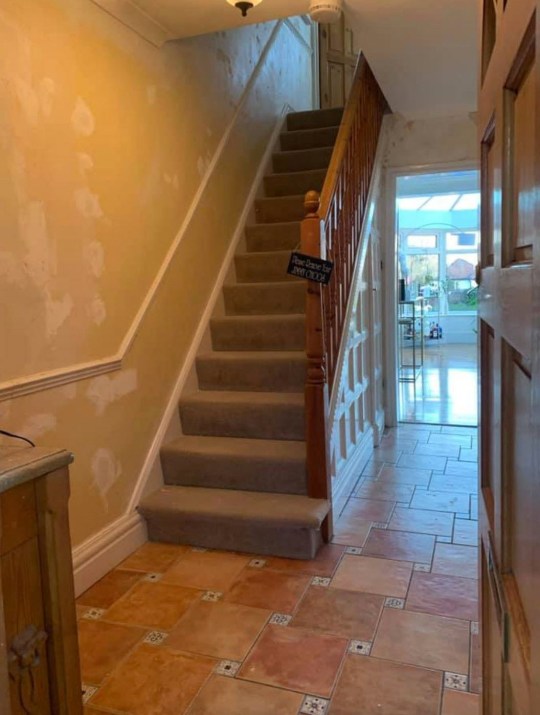 The hallway and stairs before (Picture: Jam Press/@canalviews_jimmychoos) 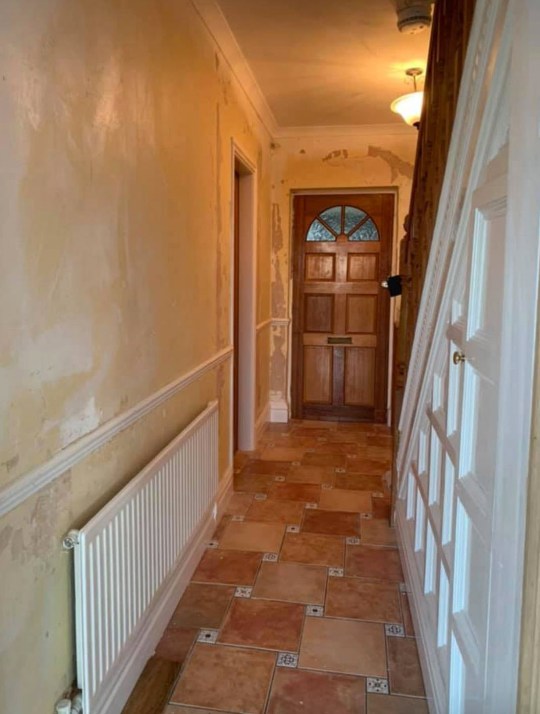 A bit of a fixer-upper (Picture: Jam Press/@canalviews_jimmychoos)

She started by painting her hallway for £165, then painted the floor for just £36 instead of re-tiling.

She then added an £80 rug from Next along with accessories from Matalan to add some flair to the space.

In the living room, she added a fresh coat of paint and furniture from affordable high street chains like Matalan, Aldi, B&M and TK Maxx, as well as The Range and Amazon.

In the bathroom, Victoria spent £36 on B&Q paint for the floor, £9 for the tiles and purchased a statement floor rug from B&M.

She decorated the bathroom with plants on sale from Matalan, as well as a towel set – which came to less than £100 in total. 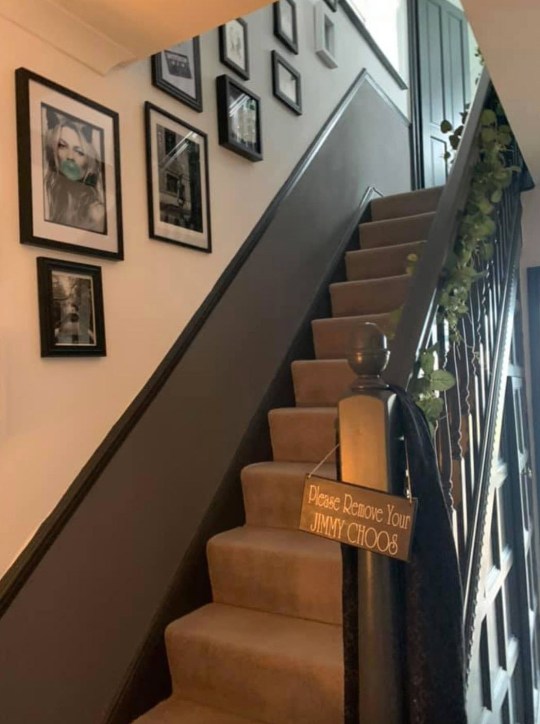 The hallway and stairs after (Picture: Jam Press/@canalviews_jimmychoos) 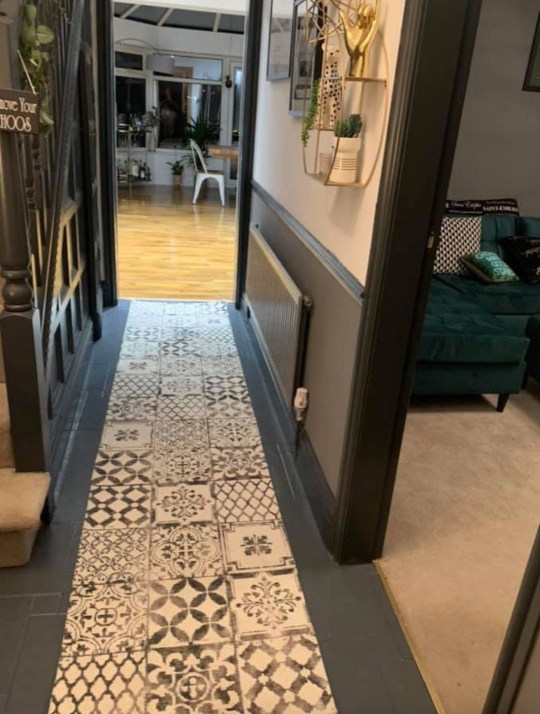 ‘I did the garden fencing and groundwork myself and sourced timber direct from my local timber yard.

‘So, I did it myself in just three weeks and spent £3,000 on timber and hired skips myself.’

For her garden, Victoria sourced timber for £3,000 for her own fencing and groundwork, and added budget furniture from Aldi.

Next, Victoria wants to buy plants, trees and sleepers for decoration. 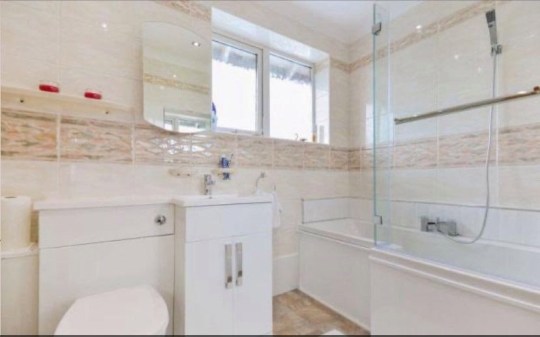 The bathroom before (Picture: Jam Press/@canalviews_jimmychoos) 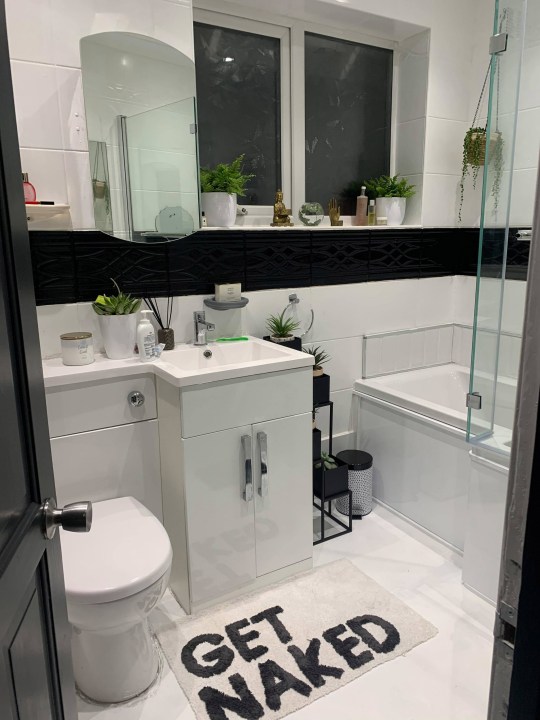 The bathroom after (Picture: Jam Press/@canalviews_jimmychoos) 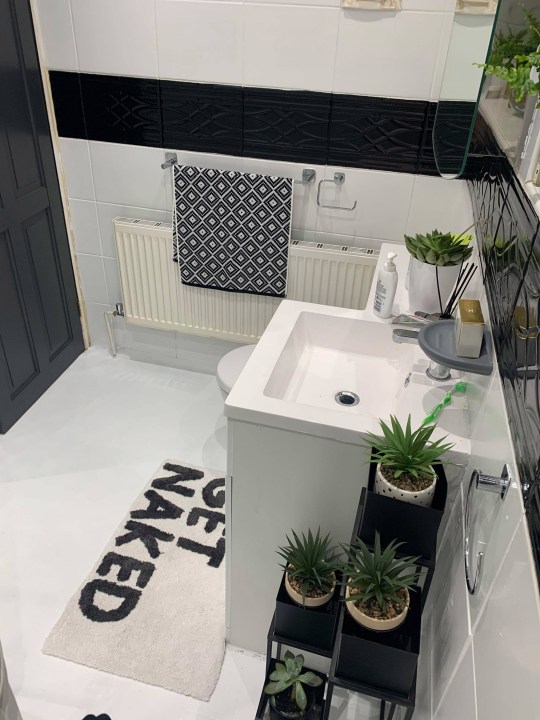 Victoria would stay up late into the night to work on the house (Picture: Jam Press/@canalviews_jimmychoos)

She stayed up late during the night to revamp the house after working full-time during the day and taking care of her two boys.

Even though it was hard work, she’s very pleased with the result and plans to do her bedroom and the kitchen next.

The mum said: ‘The challenge was doing the project alone while working full-time with two young boys.

‘I had expensive taste and a small budget and no shops open or workmen, meaning I had to paint till 2am some nights and got up for work at 6am.’ 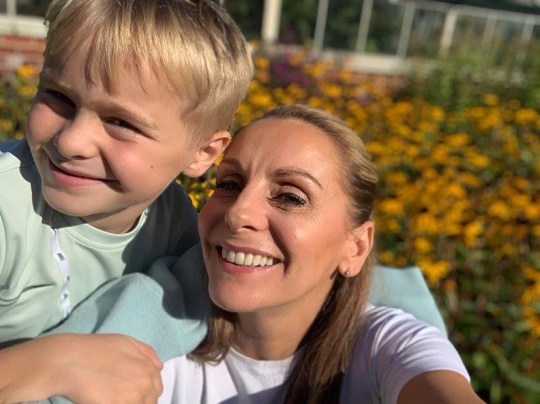 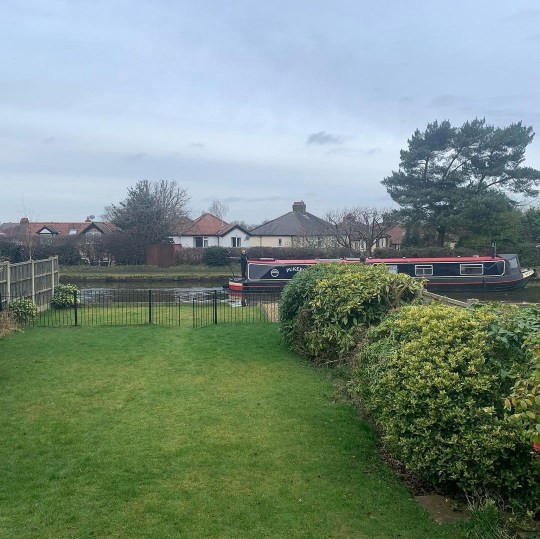 The garden before (Picture: Jam Press/@canalviews_jimmychoos) 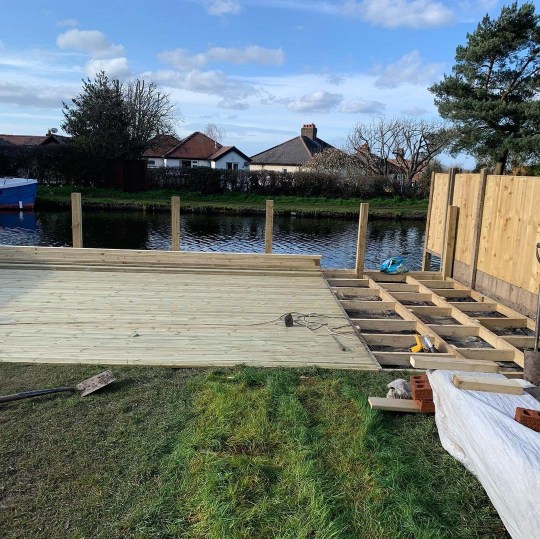 The garden in the middle of Victoria’s work (Picture: Jam Press/@canalviews_jimmychoos) 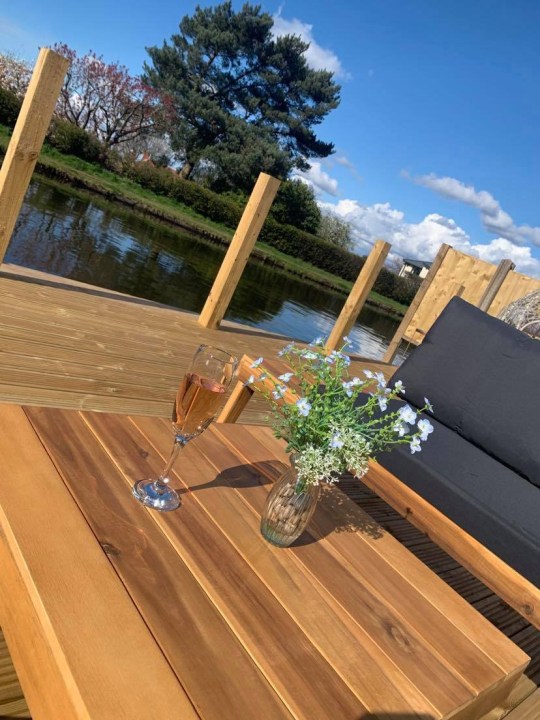 The garden after (Picture: Jam Press/@canalviews_jimmychoos)

She proudly shared pictures of her handiwork on Facebook, where the post earned over 3,400 likes so far.

Commenters have praised her DIY skills, with one writing: ‘Gosh looks really expensive and lovely now,’ while another wrote: ‘Wow amazing, doesn’t look like the same house.’

‘Absolutely beautiful!! Your a natural designer,’ commented one user. [sic]

Speaking about her hard work, Victoria said: ‘I am pleased but at first I felt the entire project was like polishing a poo until comments on my Facebook post gave me much positivity and made it all feel all worth the effort, the blood sweat and tears.

‘I secretly desire to be an interior designer.’ 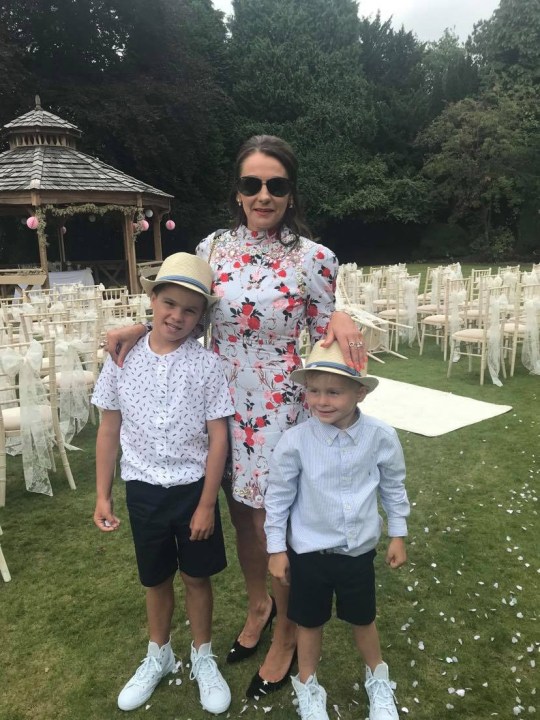 To those who are planning their own DIY project, Victoria advised: ‘Stay true to what makes you feel good, dark or light or bright, and go with what feels right to you because it is your home.

‘I was told not to go dark, but I was brave and now I love it.

‘And you don’t have to buy expensive brands to rock the latest looks.’

Have you completed an amazing renovation project you fancy showing off?