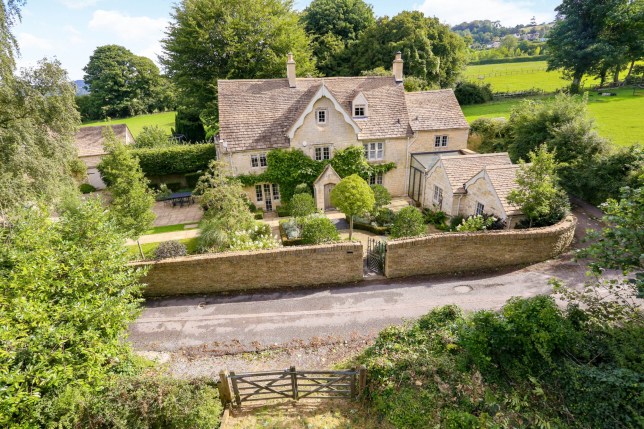 Turnstone House is a quintessential Cotswolds cottage with a fascinating history

Renovating her exquisite grade II-listed house in the Cotswolds was, says textile designer Nancy Parker, a bit like labour.

‘I look back and think it really wasn’t too bad. Then I remind myself that at times it was incredibly painful.’

Nancy’s four-year restoration of the 17th-century, golden-stone, detached home near Painswick — the historic Gloucestershire wool town known as the ‘Queen of the Cotswolds’ — is now complete.

But it was a true labour of love.

Nancy has always had a keen eye for detail.

She runs two British textile design companies: Nancy Parker Studio, which creates one-off prints for fashion houses such as Chanel, Zara, Mango and Nike, and Parker and Jules, co-founded with her friend Juliet O’Carroll, which creates dazzling, colour-popping print fabrics and wallpapers for the home.

At an early viewing of 16th-century Turnstone House, the romantic beauty of an arched gothic-style window in the hallway entranced her so much, she says, she failed to notice the rest of the house was in such a bad state it was going to need a total rebuild. 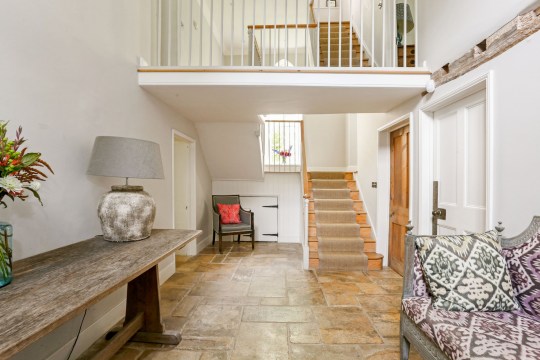 Despite it being a cottage, the property is airy and full of light

‘We were living in Dalston, east London, and renting a weekend cottage from my aunt in nearby Sheepscombe, and found the area completely magical as it is so buzzing and arty,’ says Nancy, who is mum to three daughters, Birdy, ten, Georgia, six, and Cecily, four.

‘I decided to make a permanent move here and immediately fell in love with Turnstone. But my builders would often chuckle, telling me it would have been cheaper to simply knock it down and build a completely new house — which of course we couldn’t do, given its grade II listing. Plus the history of the house was all part of its charm.’

Nancy, who grew up in a family of artists and photographers, and studied printed textiles at Nottingham Trent University, bought the run-down, five-bedroom detached house in 2011 from the late Neil Webster, who played a key role in cracking the Enigma code at Bletchley Park, and his wife, Elizabeth, a writer and dramatist.

Before this, generations of one family had owned the house, with the original 16th-century wing a quaint, cottagey affair, and the house expanding through the centuries as they acquired more wealth, with decorative crenellations added.

‘It was clearly an incredibly creative home, full of artwork and murals, but the walls were actually crumbling,’ says Nancy.

‘They needed rebuilding along with just about everything else, from a new roof to flooring, and a total overhaul of the electrics and plumbing. 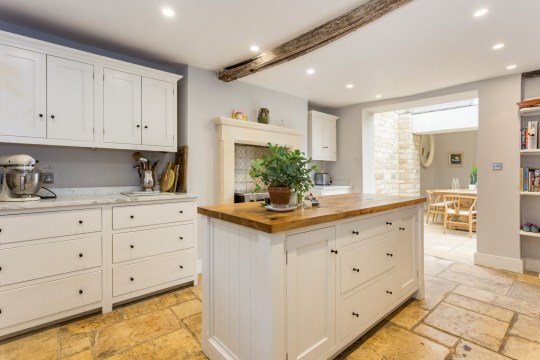 The cream and marble kitchen mixes country style and luxury 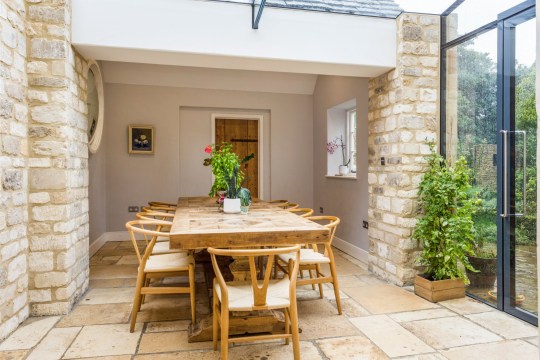 The dining room is in a contemporary extension 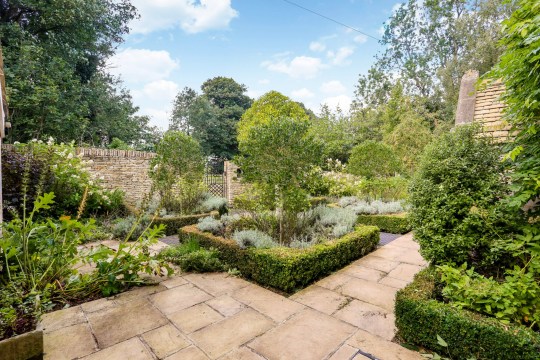 With a restoration budget of about £850,000, Nancy, over the course of four years, returned exposed beams, stone mullion windows and flagstone flooring — each slab delicately relaid — to their original splendour, while also incorporating eco features such as an air-source heat pump and rainwater harvesting system.

The property also takes in Nancy’s studio, and the detached, newly renovated Coach House (at the moment rented out on a long let for £1,600 a month, but which can bring in about £150 a night on Airbnb).

Such a large-scale project has not, of course, been without its tear-your-hair-out moments.

‘One night, when there was only tarpaulin for a roof, I woke to find torrential rain falling on my forehead,’ Nancy says.

‘I was heavily pregnant with Georgia, but spent the night in the rafters with a torch between my teeth trying to sort it out, or moving pots and pans around the house to catch the water.’

There’s plenty of drama in the décor, too, as you would expect from a designer homeowner whose singular patterns have been coined ‘Poison English’. 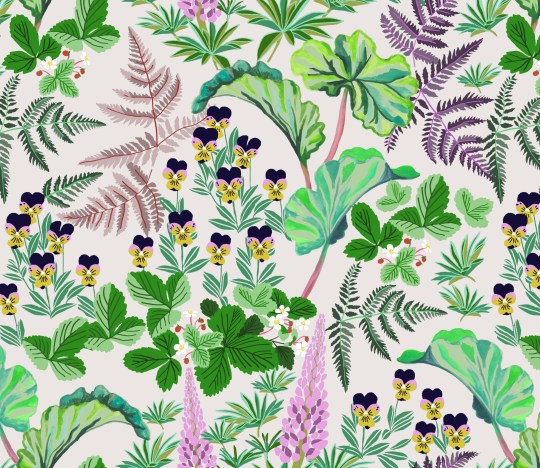 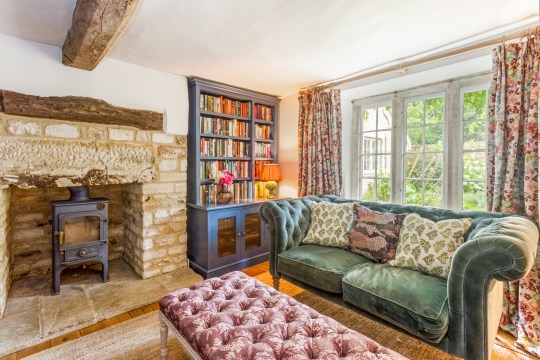 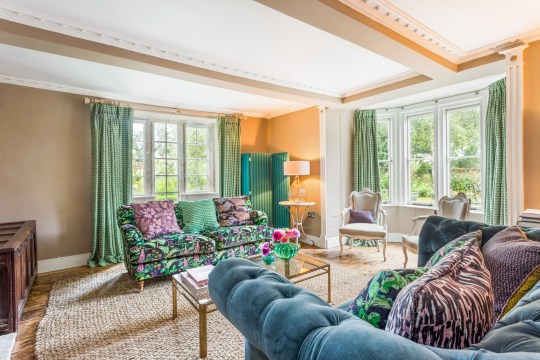 There’s no trace of anything blandly greige — instead the home is a showcase for Parker and Jules, whose prints have given their hip signature style to luxury boutique hotels such as The Rose in Deal, the Calcot Hotel and Spa in Tetbury and The Lucky Onion group collective of hotels and pubs in the Cotswolds.

Think English country gardens with a kaleidoscopic twist, chintz on acid and folk art from the Far East mixed up with English heritage classics.

In Turnstone’s living room, the sofa has been upholstered in the lilac, black and green floral Strawberry Fields Autumn Conker fabric, against a screen in the green-shaded Ziggy Ice Kelly, and cushions bearing the geometric oatmeal and green Teepee Emerald Rose pattern.

In Nancy’s own bedroom, the look is serene, with her headboard upholstered in the delicate, folksy Coromandel Flower Day Blue and curtains in the woodland-inspired Lace Ferns Clear Emerald. 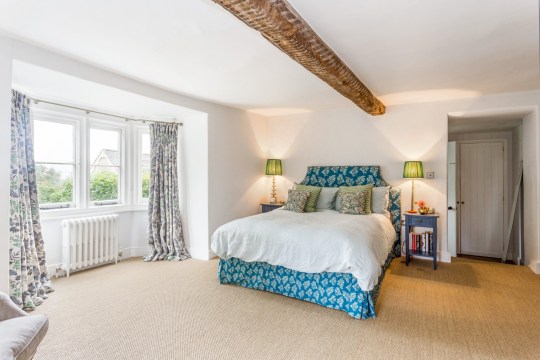 Pattern is kept delicate so it’s not too overwhelming

However, says Nancy, ‘Jules and I do like to keep things a bit bonkers, which is why we offer carefully chosen collections of colours and patterns that we know work with each other.

‘You don’t want a home that looks as if it has just had pattern thrown up all over it.’

Nancy’s studio is simplest of all, awash in white. ‘I didn’t want this space to be overtly pattern-heavy, as it’s where I am not only dreaming up new patterns and colour, but now holding zoom meetings and presenting trends to clients. 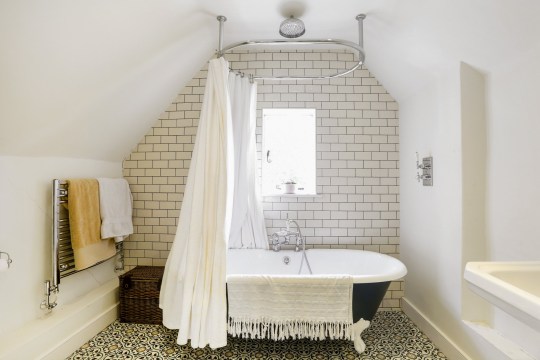 ‘I also personally like pared back bathrooms though there isn’t really any right or wrong.’

Despite the attention to detail that has gone into restoring Turnstone House, the designer is now moving on with her daughters, Rhodesian ridgeback Malo and cat Lulu, and is selling up for £2.15million.

‘I see this as my practice project, and am now keen to take on another one,’ Nancy says. ‘Though I must keep reminding myself how easy it is to forget the pain of childbirth — and of huge restorations.’