She was determined to get the job done using DIY (Picture: Jam Press/@the_herringtons_home)

A pregnant woman managed to transform her ‘dated’ home into a dream house – in just three months.

The TV presenter and mum used her DIY skills – doing the bulk of the work while pregnant.

While they were delighted to own a place, they weren’t sold on the aesthetics of the property.

The couple set about transforming it themselves, despite Carrie being six months pregnant with their first child.

Given the baby on the way, they set themselves a three-month challenge to get the house done.

‘The house was so dated and dark,’ Carrie said, who works as a host on ITV’S Jackpot247.

‘There were exposed radiator pipes, hard dark blue tiles on the kitchen floor, an old gas fireplace and a sink in the master bedroom.

‘With a baby on the way, we wanted to create a safe and comfortable home whist modernising the house too.’ 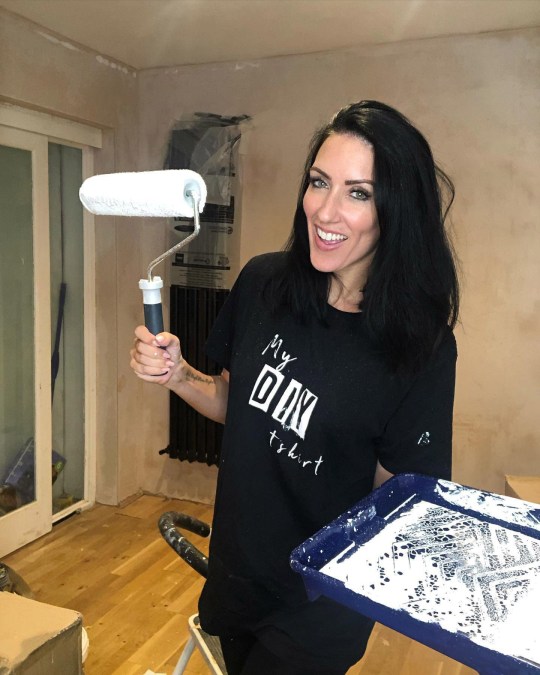 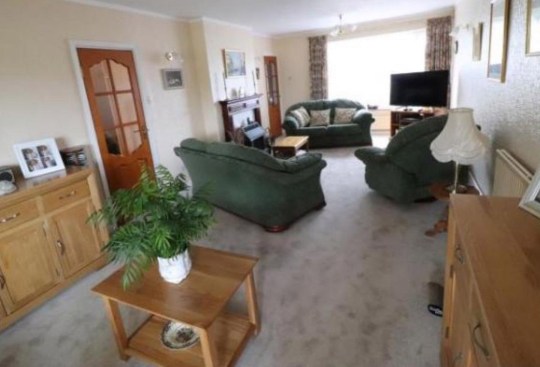 The living room before the transformation (Picture: Jam Press/@the_herringtons_home) 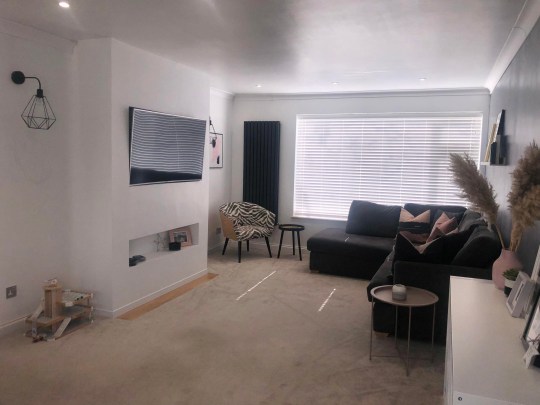 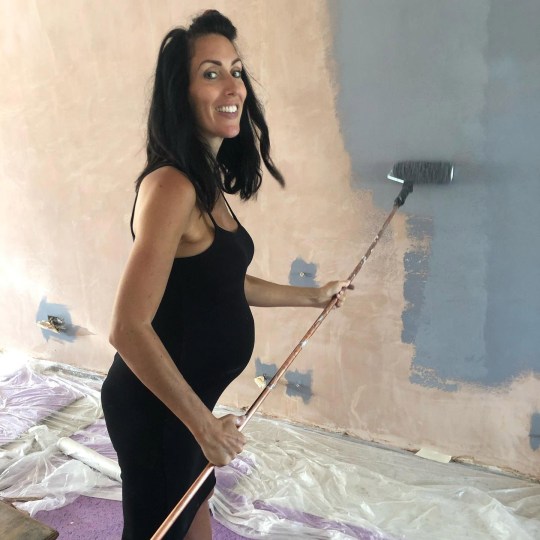 The house has three bedrooms and two bathrooms, a large living room, kitchen/diner and an office – and the pair wanted to update all the rooms.

Carrie said: ‘We moved as lockdown was announced so we cracked straight on with the house, doing everything ourselves.

‘I was six months pregnant, standing on chairs, ripping old coving down, steaming woodchip, and feeding through new cables. I was like Carl’s electrician’s mate. 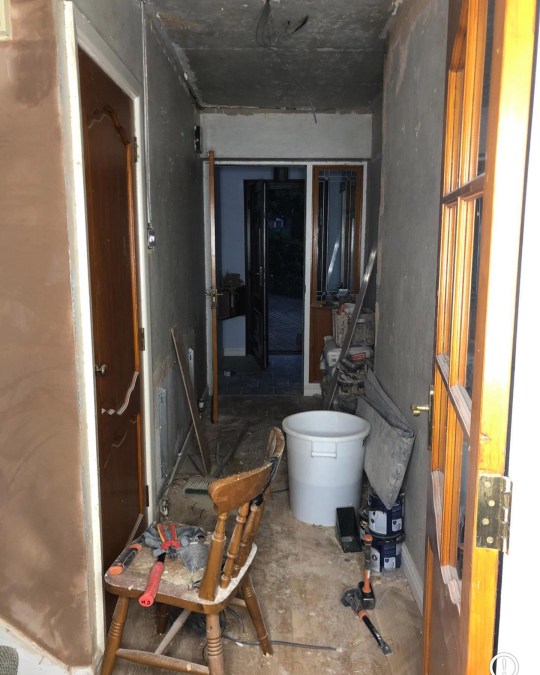 The hallway during the transformation (Picture: Jam Press/@the_herringtons_home) 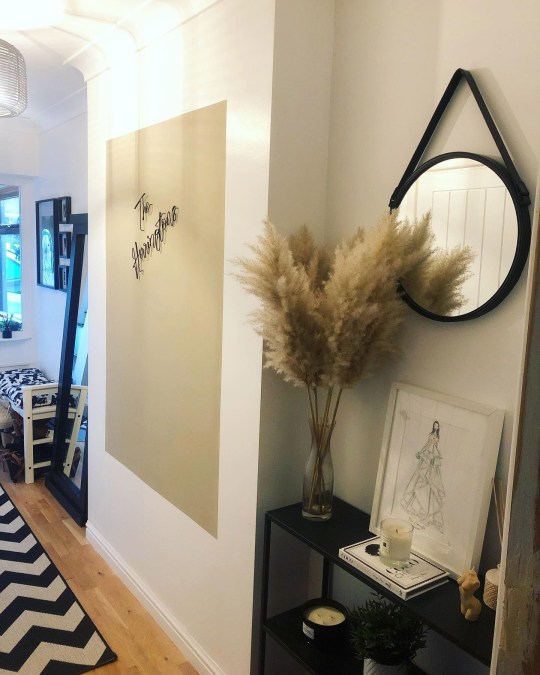 The hallway after the transformation (Picture: Jam Press/@the_herringtons_home) 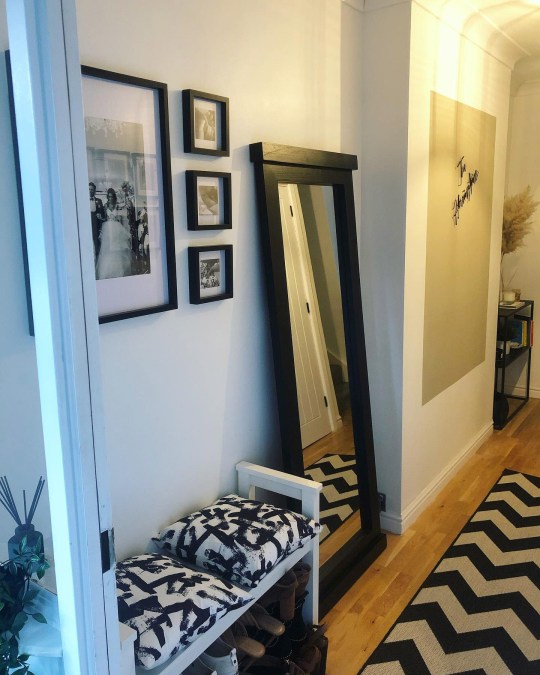 The hallway after the transformation (Picture: Jam Press/@the_herringtons_home)

‘He built the TV wall, re-wired the house and even installed the new designer radiators.

‘The only thing we had someone in for once restrictions were eased was the plastering – but Carl still gave a few smaller areas a good go.

‘I tiled our downstairs loo which I’m super proud of and I think it looks really good. 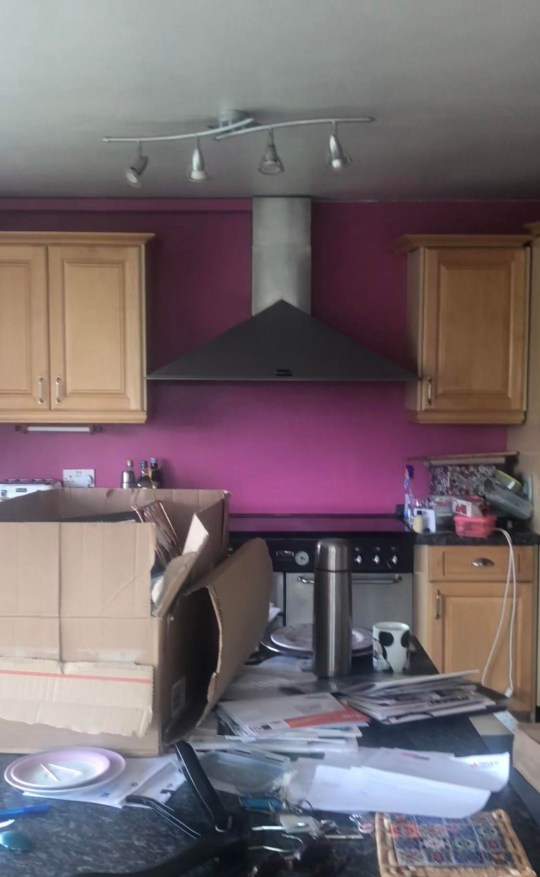 They removed the purple walls in the kitchen (Picture: Jam Press/@the_herringtons_home) 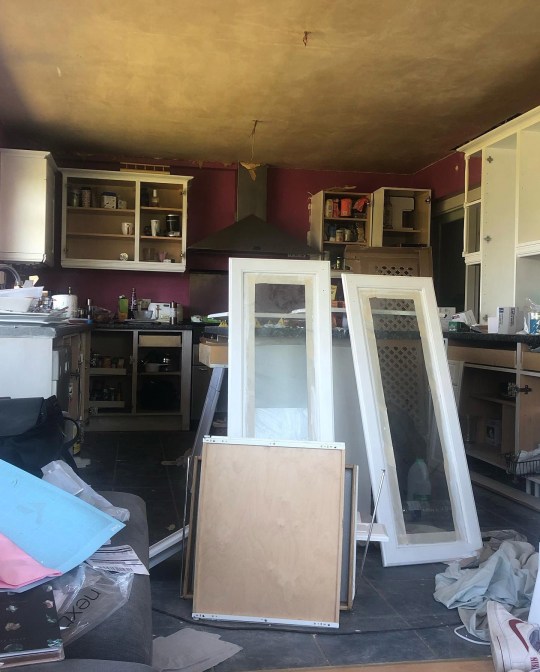 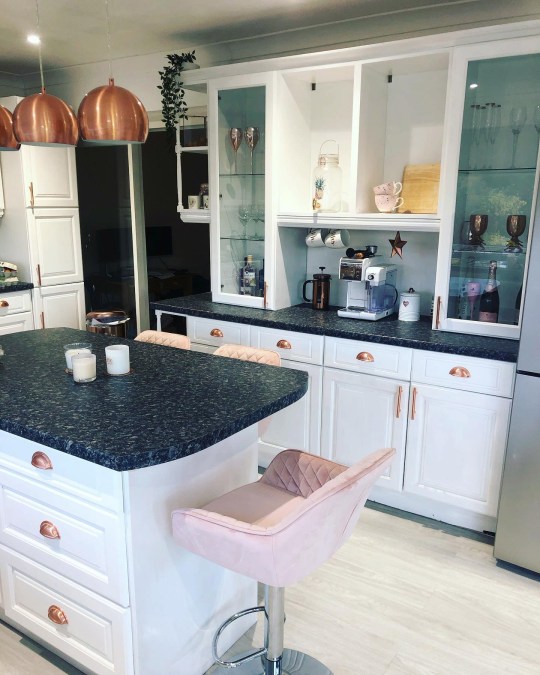 The kitchen after the transformation (Picture: Jam Press/@the_herringtons_home)

‘I saved money by painting animal print on one of my son’s wall, as the wallpaper would have cost me £270 and I painted a zebra wall and created a book area for him.

‘I’ve upcycled a desk for the office area and painted everywhere and I’m a very neat caulker.

‘I also upcycled the entire kitchen too when eight months pregnant. I think there were around 32 cabinet doors and drawers in total – I sanded, primed, painted and changed handles. 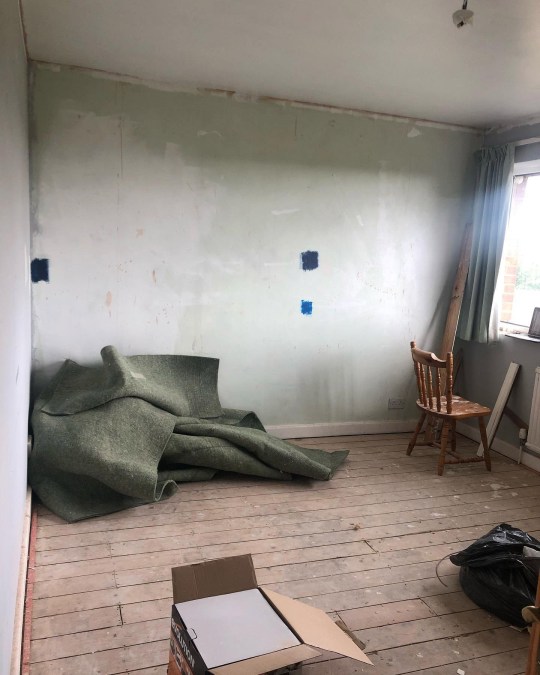 How the bedroom looked during the renovations (Picture: Jam Press/@the_herringtons_home) 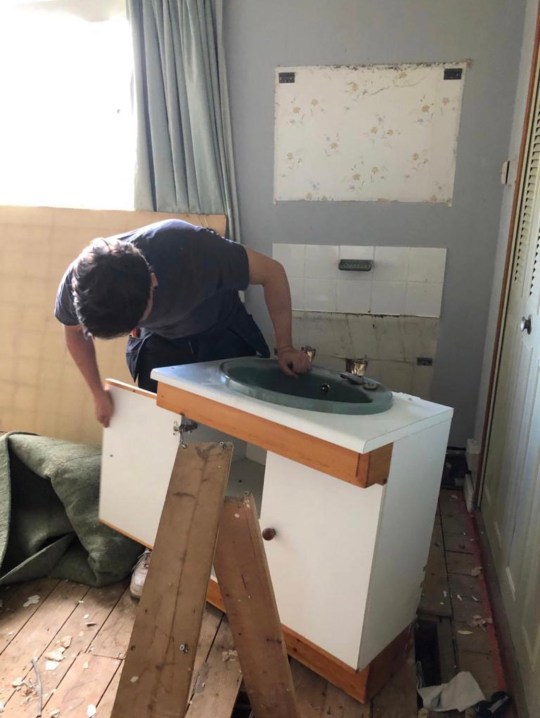 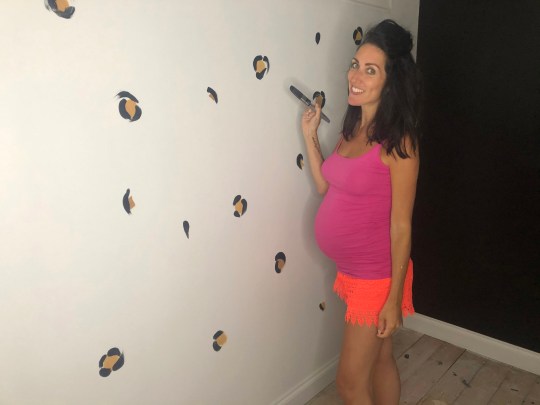 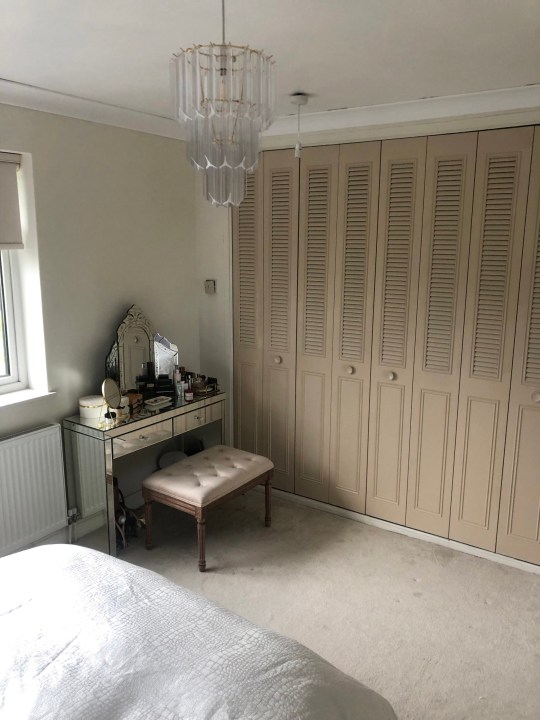 The main bedroom after the transformation (Picture: Jam Press/@the_herringtons_home) 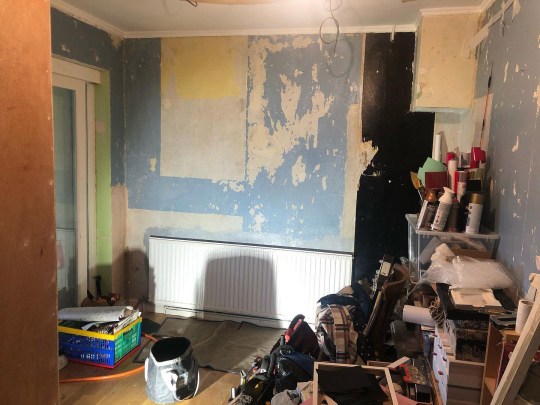 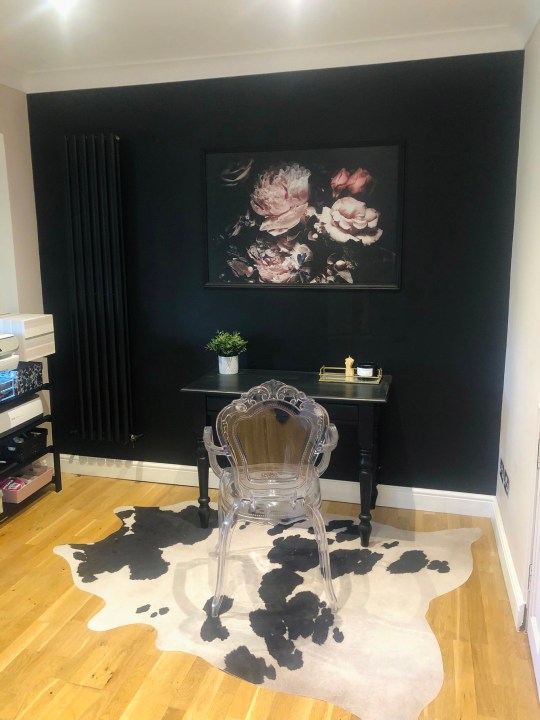 ‘When I was pregnant, a lot of the work was stripping out so I was removing woodchip, breaking away old wooden coving.’

Carrie did find parts of the journey a struggle.

She added: ‘There was a time when I was heavily pregnant when the house was dusty all the time because Carl was using an angle grider to cut slots in the walls for cable installation.

‘We walked through the house in trainers or flipflops because everywhere was either dusty or dangerous. 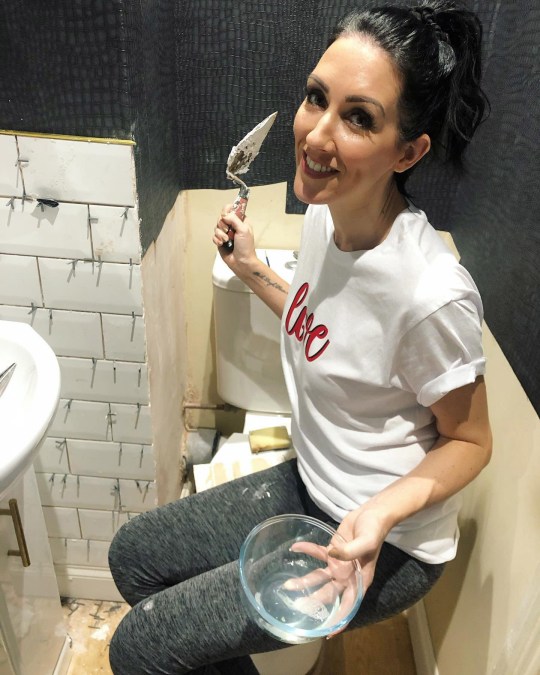 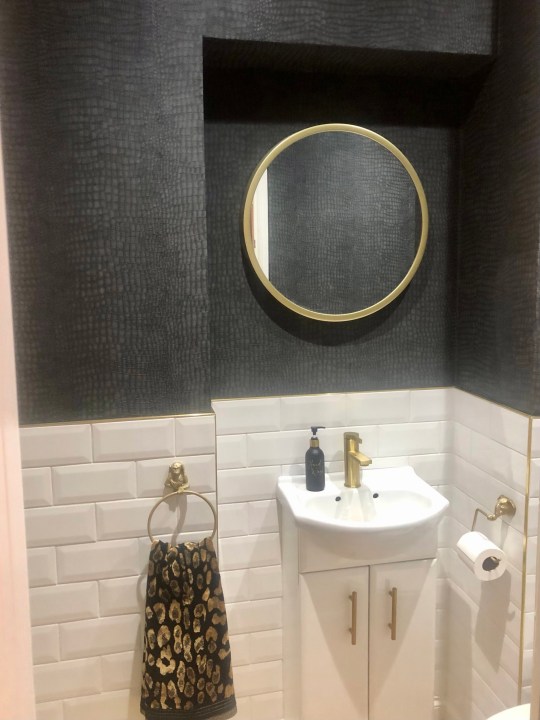 ‘By this point though we had finished the living room so that we had a comfortable, clean, safe space for during the day.’

Since giving birth to Carter, now 21 months old, the couple are still making tweaks to the home.

Carrie, who shares the transformation and DIY tips on Instagram, said: ‘My biggest achievement is decorating the entire downstairs loo – I wallpapered, tiled, grouted, and applied the tile trim and I’m so proud. I did this across weekends on our little boys naps.’

‘We had created three “clean” zones which were our bedroom, bathroom and the dining room area next to the kitchen, where our sofa and TV were at the time.

‘At the end of each day we would shower, change and only then relax on the sofa. We were still pretty chilled out about it all though which is good and looking back I love those memories.

‘Even when Carter was born, we made a little makeshift kitchen to prep his milk in the office area which is in between the hallway and kitchen. 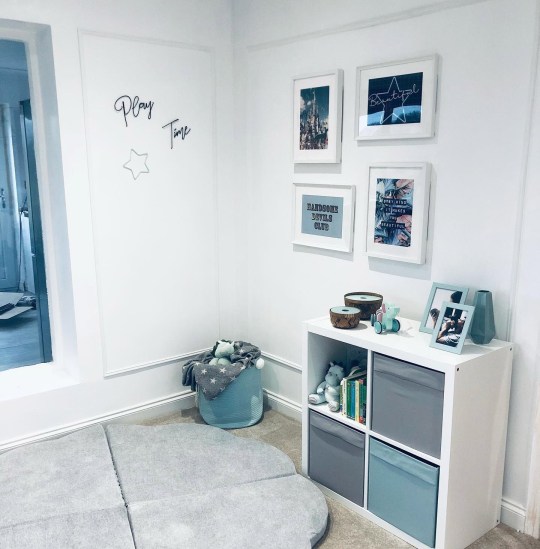 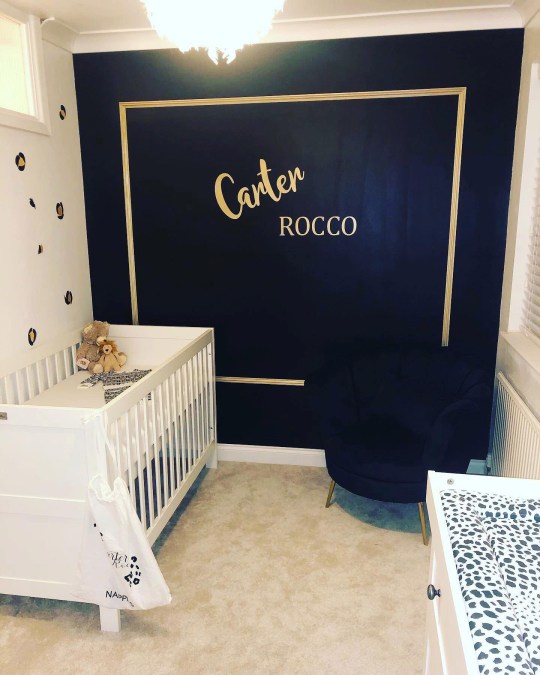 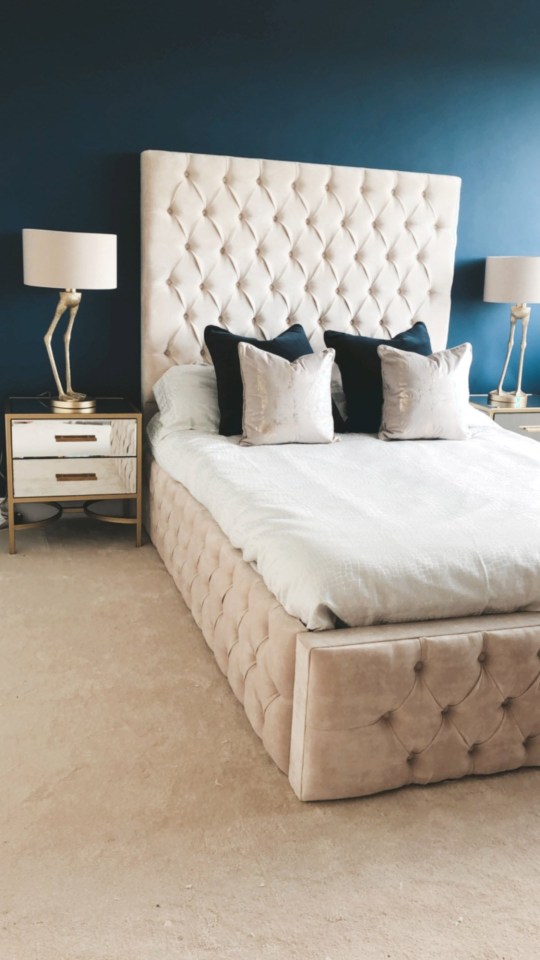 They’ve spent around £20,000 on the renovations, keeping costs to a minimum by doing all of the work themselves aside from hiring plasterers.

Their next plan is to convert the garage, but they are determined to leave some parts unchanged.

Carrie added: ‘The kitchen has been upcycled instead of changed and we have kept the doors through to the kitchen and large glass panel.

‘It’s really useful because I can peek through from the kitchen if Carter’s in the living room and it’s great for the view and light, because the house backs on to a lovely field with cows in.’

Brits feel cooler and more confident when they are wearing sunglasses, research shows