Meghan was stunned to find a manhole hidden under the carpet in her bedroom (Picture: @candyrainsalon)

When mum Meghan and her partner began renovating their 16th-century home, couldn’t figure out what was causing a damp smell in their bedroom.

That was until they tore up the carpet in the room and discovered a ‘secret manhole’.

That would be bizarre enough – why would someone just carpet over a manhole? – but when the couple pulled up the rusted lid, they discovered the cause of the stink.

A video posted on TikTok shows Meghan and her partner lifting off the seal with a crowbar, and noticing the bad smell becoming even stronger.

When they finally see inside, there’s a drainage system – or, as Meghan aptly puts it, a ‘poo pipe’.

‘We’d have had poos just floating beneath us,’ said Meghan, ‘accusing each other of farting every night.’

The video, which Meghan shared to her @candyrainsalon account, has been viewed hundreds of thousands of times, and been flooded with comments from people horrified at the surprise find.

One person asked: ‘Where’s the drainage report from the surveyor? Jeesus christ imagine if it had backed up a little and went stagnant… hydrogen sulphide.

‘Why did I put my shirt over my nose like I could smell it,’ wrote another. 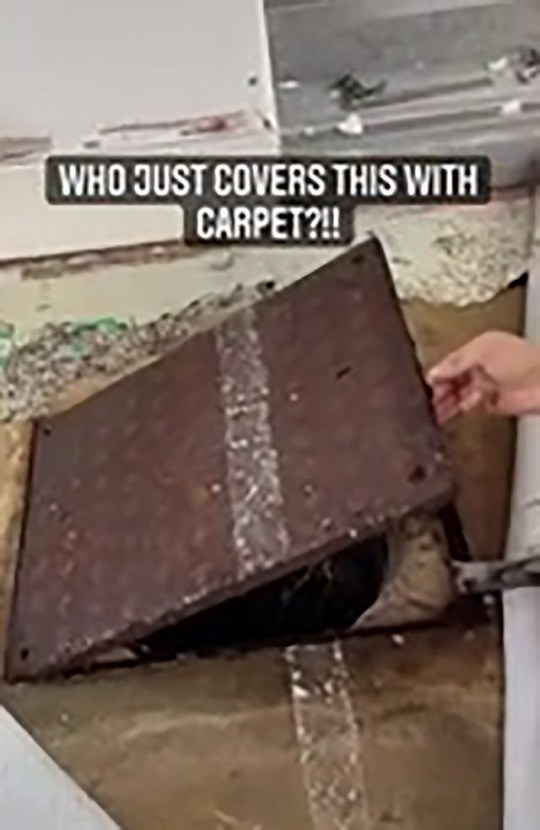 As you’d expect from a manhole that’s been left untouched for years, along with the ‘poo pipe’, the hatch contained a lot of dust and grime.

Meghan has also found a load of spiders hidden in crevices around the home, along with dirt and debris.

This looks like quite the DIY project. Good thing the couple will be documenting the whole process for our enjoyment.

Renovations are a lot more fun to watch than to actually do, right?

Jesy Nelson criticises ‘X Factor’ for its lack of support

Britain’s last sonar hull from a HMS Destroyer get converted

How your electric toothbrush can aid pollination | Gardening advice

The leaves are starting to fall at the summerhouse | Gardening advice