They’re sounds I became all too familiar with – the groan of Callum’s* door, his distinguishable footsteps, the twisting of my bedroom handle.

A few minutes earlier, I’d listened as he’d done the same to another flatmate, invading their room with a deluge of verbal abuse. I opened my door to condemn his actions before retreating into the comfort of my room, my brave front quickly giving way to apprehension. Of course, I would be next.

I knew this because the invasion of our rooms had become a common occurrence by this point, and for ridiculous reasons.

This dispute was a result of Callum’s decision to confront my other flatmate after a request to keep the toilet door closed – both during and after doing his business – in the group chat. A simple instruction for most considerate flatmates to take on board, but not those predisposed to hostility and partial to heavy drinking.

How did I end up here? I was just another bright-eyed 20-something excited to make the most of the capital. I wanted the life I’d been sold on social media: picnics in the park, drunken dinners with flatmates, and a social schedule that put the Made in Chelsea cast to shame.

But incidents like these, ones that left me trembling behind my locked bedroom door as I attempted every breathing technique I’d ever been taught, made me regret everything.

As soon as I received an offer to study a master’s degree in London, my decision to move to the capital was made. While nervous to leave Nottingham and the friendships I’d made during my bachelor’s behind – and my boyfriend of four years – the prospects that awaited outweighed my concerns. I just needed to find somewhere to live.

That process was no mean feat. During my undergrad, I could walk into an estate agent with like-minded students and find a house a mile from the city centre for less than £100 a week. Suffice to say, in London, it’s not that easy.

With no connections to the capital and a limited budget, I turned to SpareRoom. Keen to save on transport, I wanted to be within walking distance of my uni in Clerkenwell. Whitechapel seemed ideal: low-cost, bustling, and only a short journey into central.

I came across a four-bed flat, a stone’s throw from Aldgate East station and less than 10 minutes from Liverpool Street. The flat was pokey – really pokey – but the west-facing rooms were light and airy with skyline views and a pocket park outside. I paid £700 a month, inclusive of bills; an extortionate price to my friends back in Nottingham, but, I was told, a decent deal for a double bedroom in Zone 1.

During the viewing, the estate agent informed me that one room had been secured by a young male professional. This wasn’t a major concern. I felt comfortable enough sharing with guys, plus the chances of another female flatmate weren’t out of the question. Anyway, I couldn’t afford to be picky. I signed later that day.

I arrived a few weeks later, the contents of my life jammed into a suitcase. It was then that I met Callum. He seemed friendly, well-spoken, and good mannered – what you’d expect from someone who’d recently graduated from one of the country’s most prestigious universities, as he had. Not the sort of person you’d ever imagine feeling intimidated by. 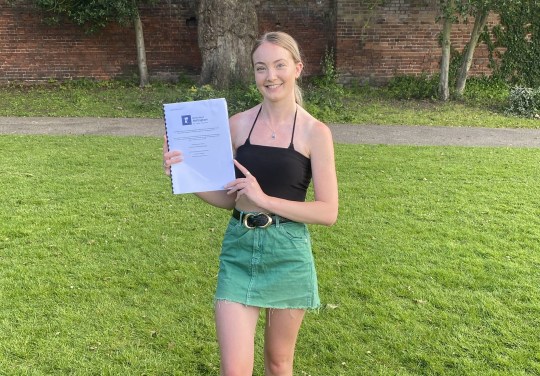 How did I end up here? (Picture: Lilith Hudson)

Soon we were joined by another tenant, a 26-year-old PhD student, male. Then the final room was taken by, you guessed it, another male. I quickly found myself sharing a flat with three older men.

I wasn’t bothered by the gender imbalance at first. We got to know one another with trips to the pub, plus I soon made friends with the girls on my course. I was settling into life in the big smoke, excited to build my future.

But less than two months after moving in, that future began to look very different. It was a Friday night in November and I’d been out for drinks with friends, blissfully unaware of the torrent of hateful messages Callum had been sending via WhatsApp.

They related to a disagreement we’d had weeks earlier that he’d obviously stewed over ever since. After an evening of drinking alone, he decided to air his grievances.

That disagreement was over the outcome of the Kyle Rittenhouse trial in the US – the white teenager who fatally shot two BLM protestors and was later acquitted of homicide. It was clear we didn’t see eye-to-eye politically, so we agreed to disagree – but I mentioned that, at their core, his comments could be interpreted as racist.

There was no overblown argument, just a heated debate, but when he continued imposing his views on me via WhatsApp in the days after, I muted his notifications. So, when I arrived home around 1am weeks later, oblivious to the hateful messages that had been pouring into our WhatsApp chat for the past three hours, I was totally unaware of Callum’s state of mind.

I was ambushed as I came through the door as he began to demand an apology for my accusations of racism. At first I thought it was an innocent prank to make me jump. My guard was up after walking the last leg of the journey alone, so he succeeded. I certainly wasn’t expecting a confrontation. In the weeks following our disagreement, we’d had very little contact other than the odd civil exchange in the kitchen and his occasional political spiel in our WhatsApp chat, which I ignored.

But this was impossible to ignore. I was accused of being politically ill-informed, of slandering his name, and was the target of a tirade of demeaning expletives.

As tensions escalated, I withdrew to my room only for him to barge in moments later, brazen and intimidating.

This was an intoxicated man – four years my senior and nearly twice my size – spewing insults at me in my own bedroom while I tried to hold back tears. I’d never felt more belittled or violated, but I stood my ground, raised my voice, and threatened to film him, at which point he left.

But the precedent had been set. In the months afterwards, antagonistic confrontations – regularly fuelled by Callum’s drinking – would often end with him entering my room. The podcast I was listening to in my bedroom at 9am was keeping him awake; I closed the front door too loudly when leaving for uni; I asked him to close the kitchen door after waking me up at 3am.

Occasionally we’d be on good terms, usually when he’d altered his sleeping pattern and laid off the alcohol. But I was now in the habit of locking my bedroom door at night and, increasingly, while I was at home during the day, too. My room became a strange, inverted prison. 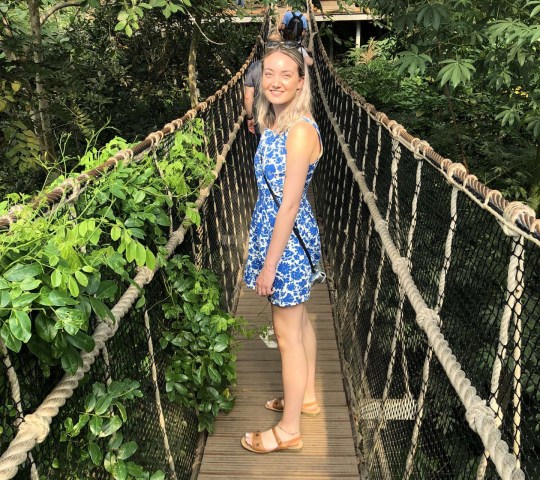 Let my story be a cautionary one (Picture: Lilith Hudson)

After another flatmate, Joe*, became the next target, the ordeal was put to an end.

In the wake of Callum’s abusive messages and harangues in the hallway, invading my other flatmate’s room was the final straw. Joe called 101 and Callum was arrested for alleged common assault.

That night, as he was escorted from the flat by the police – a weight lifted from my shoulders. Despite the raised adrenaline all evening, I slept peacefully for the first time in months knowing Callum was spending the night in a police cell – though I have since learnt he was not charged and the case dropped.

Upon learning about these events, I was told that the estate agents refused to extend his contract and advised him to leave immediately. However, until he sorted alternative arrangements, I had to face him again. These last few days were some of the worst. Shameless and resentful, he continued to intimidate and antagonise at any given opportunity, despite instructions to leave us alone.

The starry-eyed 22-year-old that first moved to this city was defeated. No matter how much time I spent out of the flat or how many distractions I constructed, my days were consumed by the tensions in the flat, which always awaited on my return home.

My room – roughly 100 square feet – is the only space in this vast city I can truly feel safe. Or at least that should be the case.

With ever-increasing rent prices and the rising cost of living, the vulnerability of many women is determined by their income. Those who can’t afford to rent alone often find themselves in cramped flat shares with strangers.

Landlords and estate agents must do more to help young women feel safe. Setting up meetings between prospective tenants and advertising more women-only flats would be a good place to start. An end to the cash-grab of deposit races wouldn’t go amiss either.

As for the young women moving to London alone, let my story be a cautionary one. Take heed and try to find a group of like-minded women to live with. Don’t let optimism overwhelm your naivety.

And to the men who think it’s OK to invade a person’s personal space, think again.

Now nearing the end of my master’s, I’m disillusioned with the city I hoped to build a life in. It’s an isolating and expensive place that I can’t help but associate with a person who made me feel unwelcome.

My safety, comfort, and mental health come first. Whatever that means for the future, it starts with leaving this flat. Right now, I have just over a week left in this city before I return home to my family, then I’ll search for somewhere else to build my life.

* Names have been changed.

What I Rent: Sarah and Anthony, £625 a month for a flat in Liverpool

How to find a trusted tradesperson and avoid rogue workers