Look inside this architect’s colourful and quirky London home

Architect and designer Barnaby Gunning has forged a career working with some of the most celebrated names in his industry, including Renzo Piano, Norman Foster and Ron Arad.

He has worked on the spectacular two-acre glass-roofed Great Court at the British Museum, and with structural engineers Atelier One, known for their touring exhibitions and dramatic stages including those for the London 2012 Olympics Opening Ceremony, the Rolling Stones and the Queen’s Diamond Jubilee.

From his practice in north-west London, he has also created a series of avant-garde homes for wealthy city and country clients, including a unique, oak-clad home in Shipton Gorge, Dorset, that’s ‘super-elliptical’ in shape – somewhere between round and rectangular – which has been much lauded in design bibles across the world.

But when it came to his own home, a flat in an 1890s mansion block in Hampstead, NW3, he once again needed to think outside the box. Not only did he want it to adhere to his architectural principles, but it had to be able to adapt and evolve to the needs of a growing family.

It’s a design odyssey that Barnaby has been on for the better part of 30 years, resulting in the transformation of a classic period home into one full of hi-tech materials, surprising new contours, vivid colours and unexpected quirks.

‘The houses and extensions I design for clients are always the results of conversations,’ says Barnaby, 54, who is also a programmer specialising in interactive 3D content. ‘And my family home is the result of a continuing conversation between my wife and I.

‘Lucia and our three children – two in their twenties and one who is just 10 – became my clients.’ 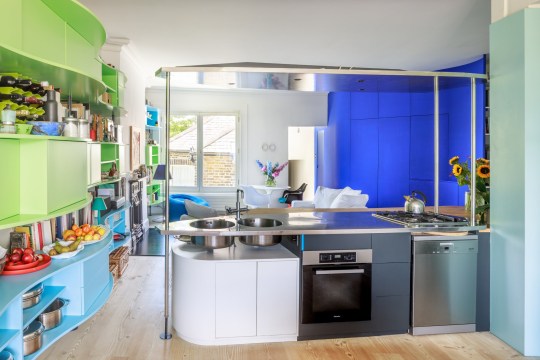 The colours are so quirky (Picture: Jeremie Souteyrat) 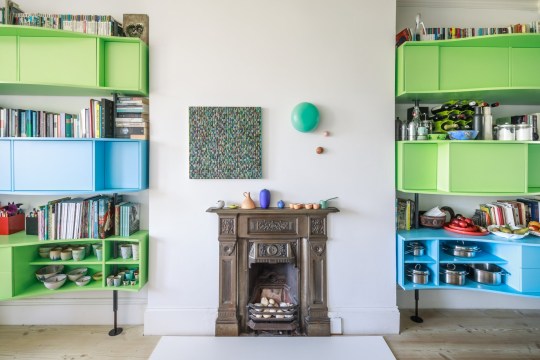 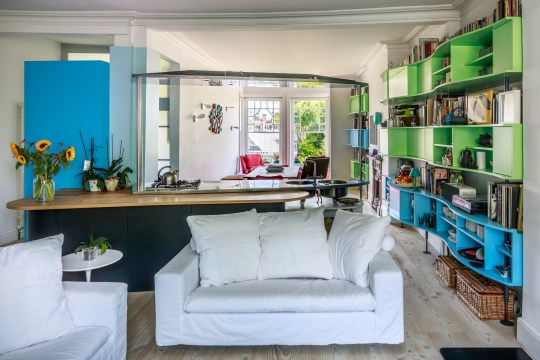 His wife, Dr Lucia Patrizio Gunning, also 54, is an eminent Italian-born lecturer in modern history at UCL.They met as students in London and in 1991, they were renting a flat near Highbury Fields, Islington, from the late designer and architect Max Clendinning, which was filled with bold hues and Picasso ceramics.

‘My parents-in-law convinced us we should be buying in London, not renting, so we took the plunge and bought the apartment for less than £200,000,’ says Barnaby. ‘It was a big financial burden for two students to take on, but well worth it.’

The four-bedroom home is over the third floor of Frognal Mansions, a red-brick, stucco-dressed building in a conservation area on Frognal, the leafy street stretching between Hampstead and Finchley Road. The flat was somewhat run down, and crammed with furiture, but the potential was obvious.

‘Most mansion flats are dark and poky but this one ran the entire length of the building, with two large living spaces, bay windows with their original Victorian glass, and a long corridor, which led to the bedrooms,’ says Barnaby. ‘It had lost a lot of its magic over the years but it was clear we could find it again.’

The 1,540sq ft flat came with use of shared communal gardens and was just a short walk from Hampstead Heath. Best of all, though, were the views. ‘You could see to Canary Wharf and over to the planes taking off from Heathrow’s runways, as well as to the South Downs,’ Barnaby says.

On weekends, friends helped the couple to strip out everything that was cramping the flat’s style, including old kitchen cabinetry and the dark blue bathroom. The original floorboards were replaced with an acoustic sub-floor, over which went Dinesen Douglas fir boards. Two Victorian fireplaces were sanded down to remove layers of paint and dust, then burnished.

As with any London home, storage space was vital as the family grew.Barnaby set about redefining spaces, installing an ingenious series of brightly coloured shelving and hidden cupboards throughout, with both design and practical values.

‘I used lots of curvaceous shapes to create push and pull between spaces. Things we didn’t want on display, such as the washing machine, carrycots and car seats, could be effectively hidden away, while our book collection could be properly displayed.’ 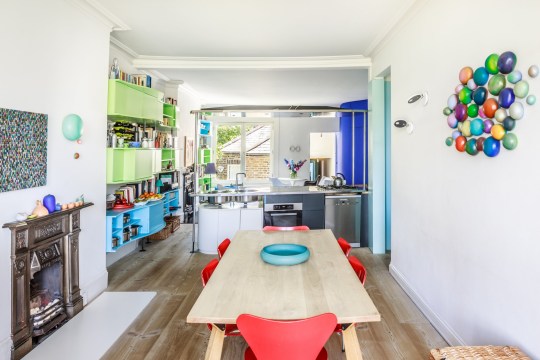 The dining area is so chilled (Picture: Jeremie Souteyrat) 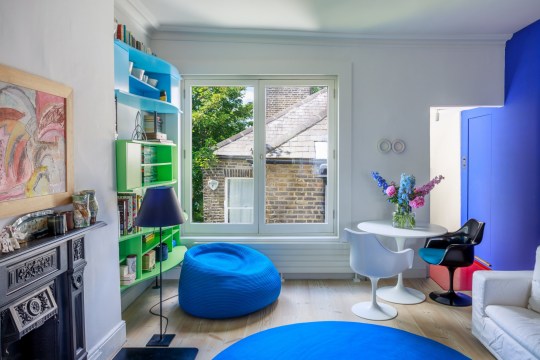 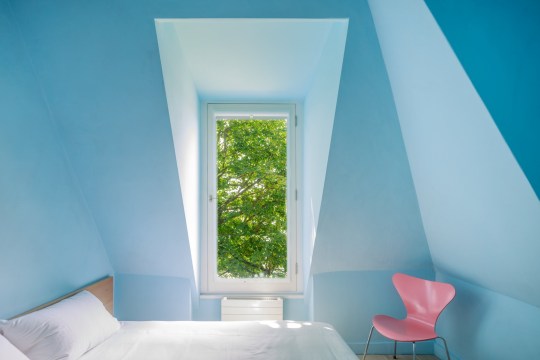 Proof that you don’t have to stick to white walls to be zen (Picture: Jeremie Souteyrat)

Serving as both storage and artwork, ripple-effect acid-green and blue shelving units, built of customised, laminated plywood, undulate across the rear wall, displaying hundreds of volumes, from family-favourite cookbooks to works on architecture and antiquities, the financial and artistic dynasties of Italy, plus British, American and European literature, as well as children’s books and comics.

A curved wall opposite, done in an  Yves Klein-inspired blue, disguises a bathroom and a study area with a built-in desk.

Off the hallway are the four bedrooms. In the main bedroom, painted in pale lilac, the pivoting door doubles as entryway and wardrobe, hiding built-in shelving, and an eight-poster bed was crafted out of beech to Barnaby’s own design.

The second bedroom – used by one of the couple’s sons who is a musician and electronics engineer – has full-height wardrobes painted in sunshine yellow.

The main bathroom is painted sky blue and is accessed by a bespoke staircase in red fibreglass, with the original timber treads retained. Barnaby has used various paint ranges throughout the home, including Sanderson, Farrow & Ball and Little Greene.

With equal importance given to shape, line and colour, much of the home’s furniture was also designed by Barnaby, mixed up with pieces including beanbags and swivelling chairs by contemporary Italian design brand paolalenti.it.

Sculptural pieces by London-based Japanese artist Yukako Shibata adorn the walls, ‘as we love the way she does magical things with colour’, Barnaby says. The standout piece is in the main living area, an installation of multi-coloured pebble-shaped objects that cast back reflective hues on to the white wall behind it.

Now that the Gunnings’ two elder children have grown up, the much-cherished home has been put on the market, for £1.75million with The Modern House. This includes a share of the freehold, though an annual service charge of about £5,000 is payable. ‘We plan to release some capital to help our children get on the property ladder,’ Barnaby says, ‘and also to spend more time in Italy.

7 Growth Stocks to Buy After a 20% Correction