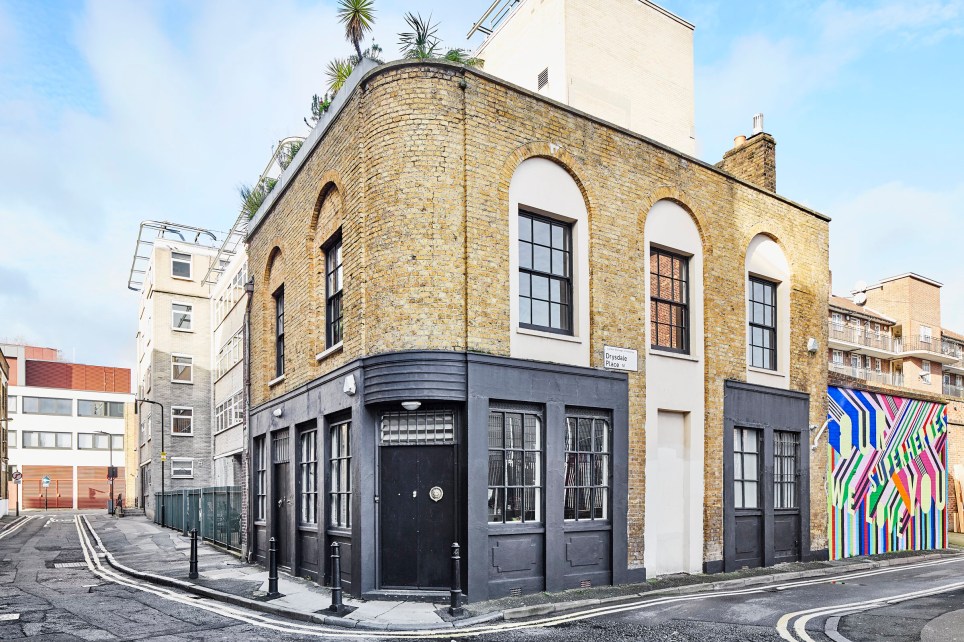 The former pub is known as London’s ‘most colourful home’ (Picture: Zoopla)

Known as London’s ‘most colourful home’, a two-bedroom semi-detached house in Hoxton is up for sale for £2,850,000.

It’s owned by artist Morag Myerscough, so anyone who has seen her work will know to expect something incredible.

The property used to be a pub called The Weavers Arms, and was originally built back in the Victorian years.

It was turned into a living space, but kept its two-storey corner section in the original yellow-stock brick, then designer Morag, along with her partner Luke Morgan, set to work making the house into something special.

‘I’d been living in Clerkenwell and working at a studio nearby, but I eventually decided that I wanted a place where I could both live and work,’ said Morag. 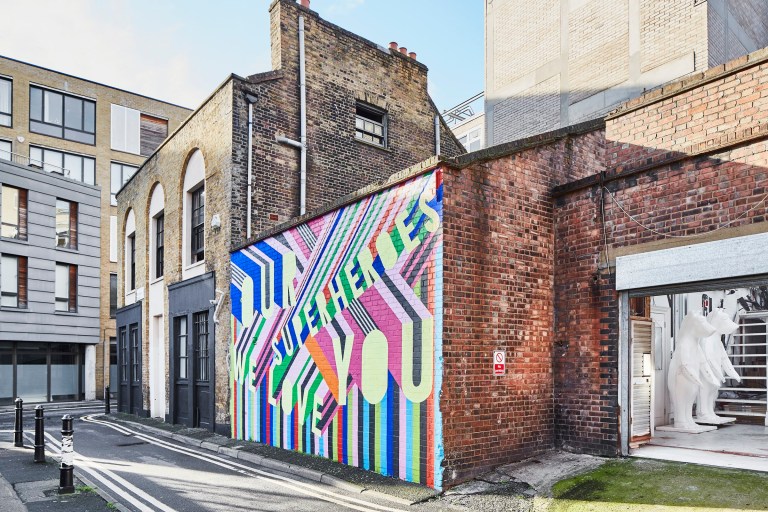 ‘I was looking in an estate agents window one day and saw an advert for this place. The building was covered in graffiti, but I liked the look of it with big square rooms and good lateral space.

‘I walked inside this house and it was total love. It was empty and although it required quite a lot of imagination to make it work, it was my absolute dream home.’

Now, it’s the perfect space to live and work, with close to 4,500 sq ft of internal space, including two massive roof-lit studios, a large basement, and a roof terrace. 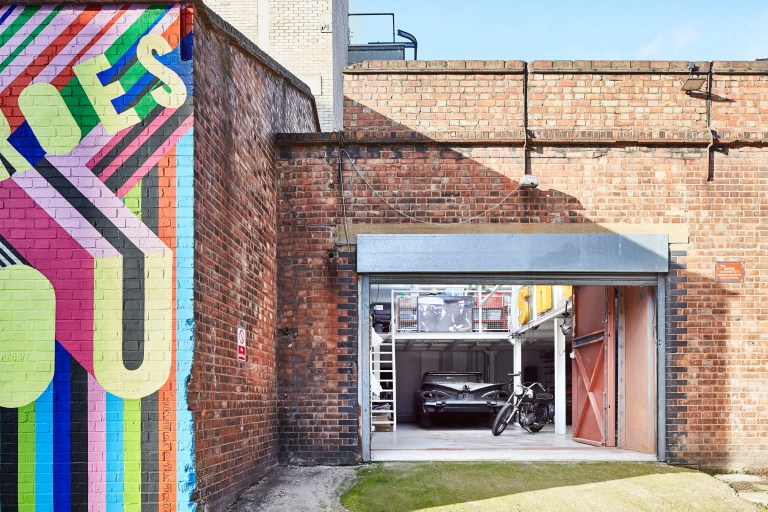 The property is a minute’s walk from Hoxton Square (Picture: Zoopla) 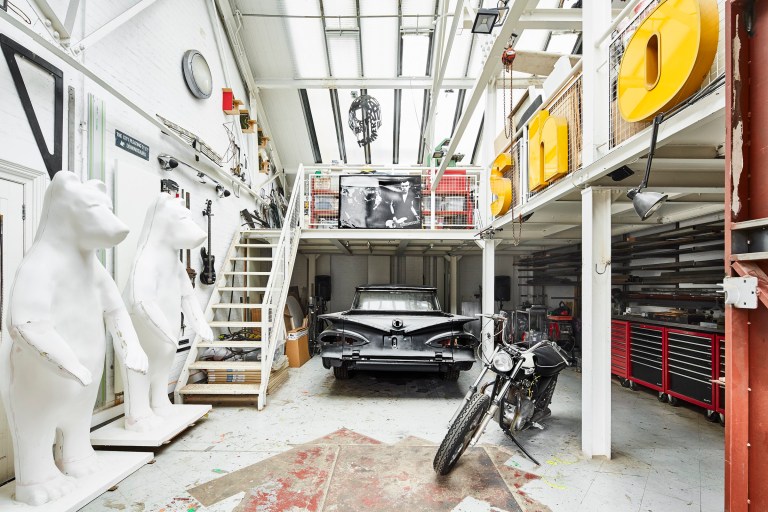 You can drive right into the studio space (Picture: Zoopla)

We reckon it’s the perfect home for a creative type who likes to have visual inspiration wherever they look.

There are two entrances, one to the residential part of the house and the other through the wooden shopfront.

The latter one takes you into a studio and office in an L-shape, which then leads to a second, even bigger, studio with amazing light thanks to a cathedreal ceiling with exposed-steel trusses. 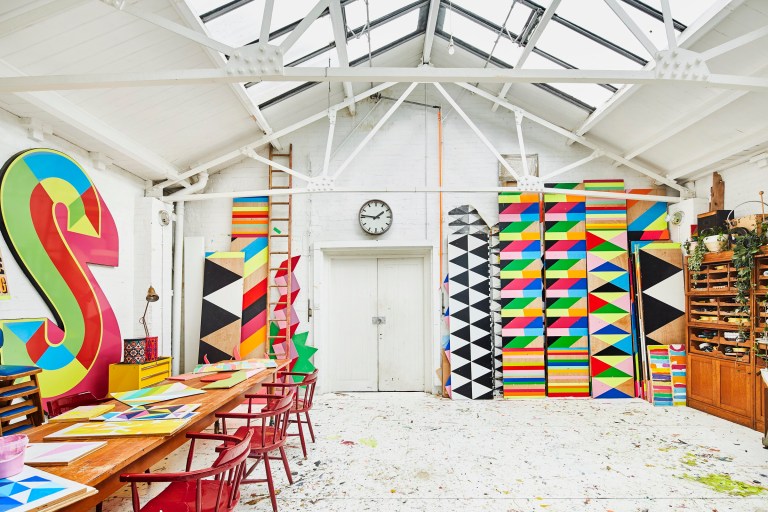 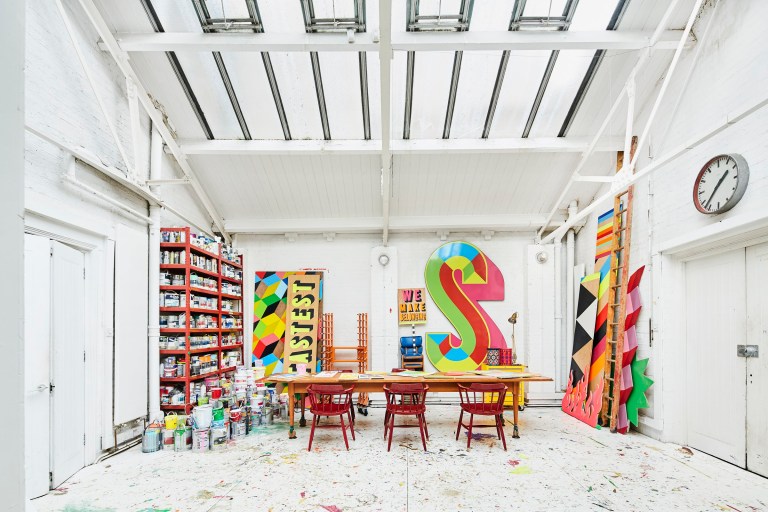 Morag says she’s ready to let someone else make the space their own (Picture: Zoopla) 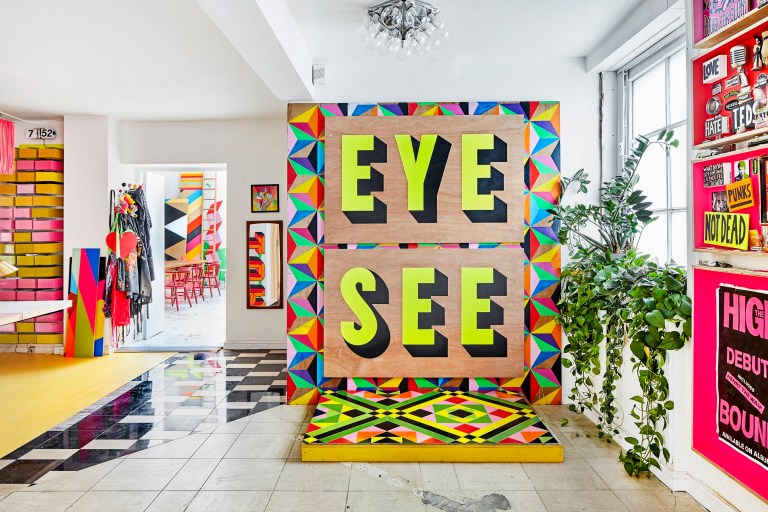 We’d be tempted to keep the place exactly as it is… (Picture: Zoopla)

This studio has a shower room in one corner, so painters can get plenty messy without worrying about trekking colours through the house.

Then there’s another studio space, also sky-lit, with a mezzanine and car access through big shutters.

That covers most of the workspace, now let’s go through the residential entrance.

Through this door is the library, which is a glorious display of cheering shades that was created in lockdown. 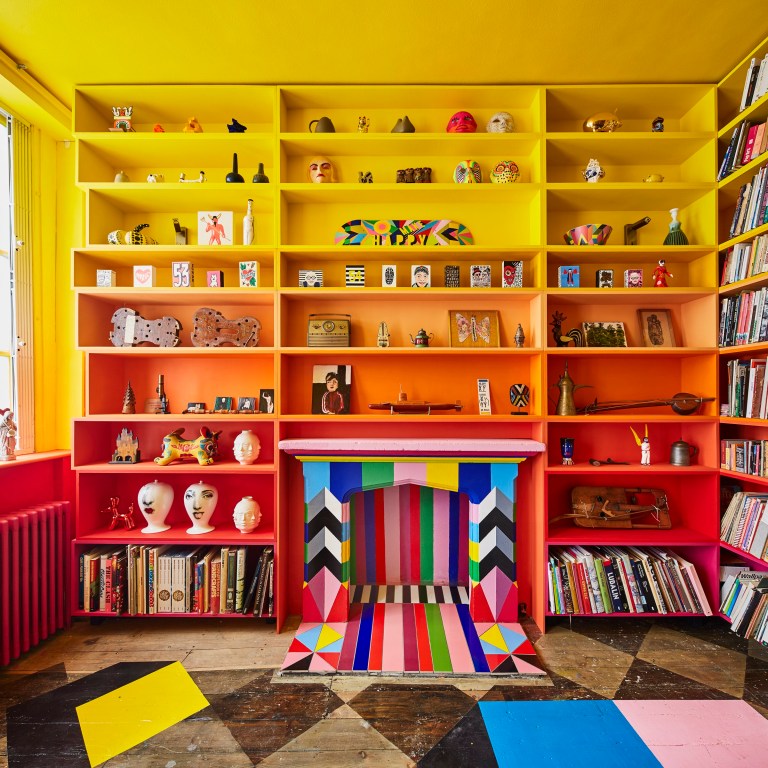 The library was created in lockdown (Picture: Zoopla) 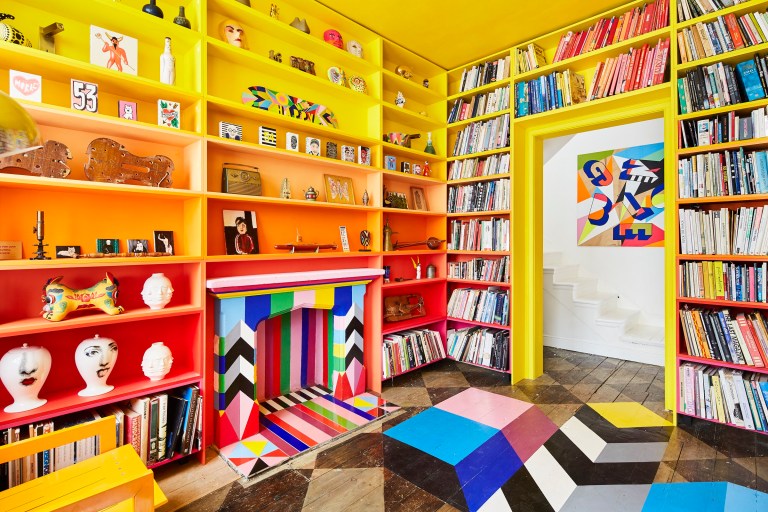 It has an open fireplace, so you can get cosy, painted like a classic Morag artwork, of course, so it also provides great Instagram opportunities.

Through a bright yellow doorway, a white staircase leads down to the basement, or you can go up to the first floor. 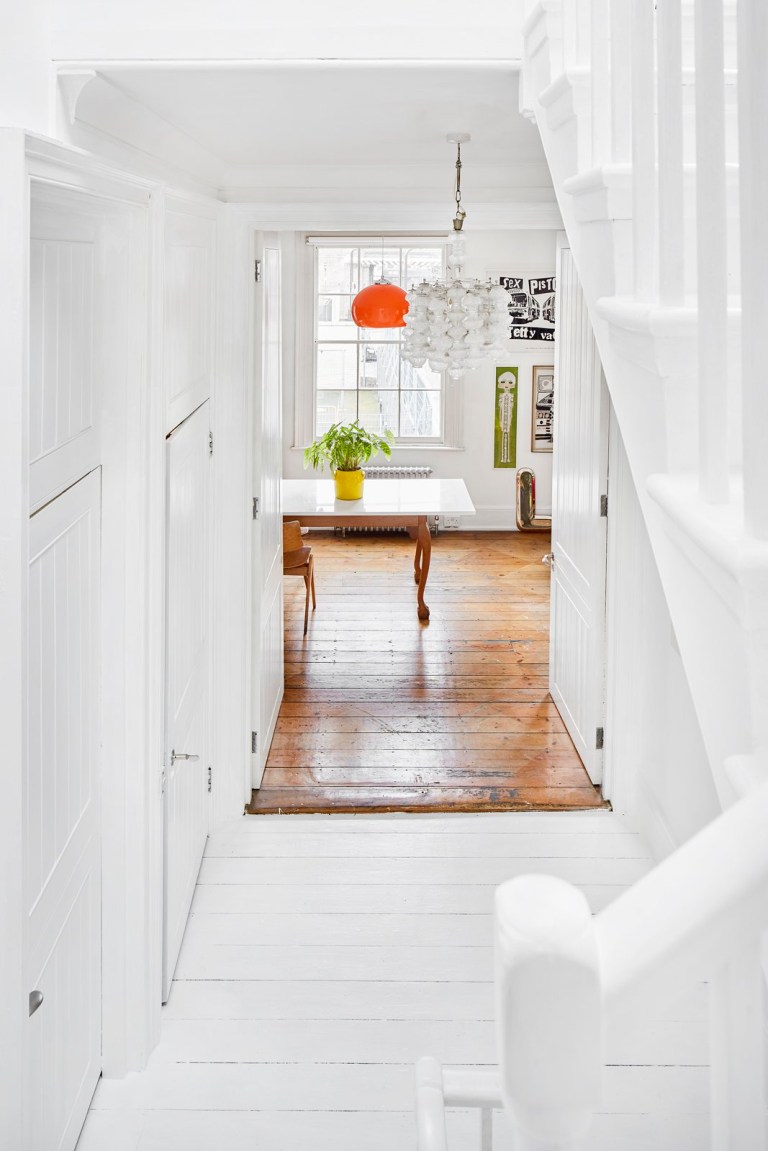 There’s a lot of colour, but most of the walls are actually plain white (Picture: Zoopla)

On the first floor is an enormous open-plan living room, dining space, and kitchen, with sash windows letting in plenty of light.

Also on this level is a bedroom, which is currently serving as a dressing room, as well as a guest WC and walk-in shower. 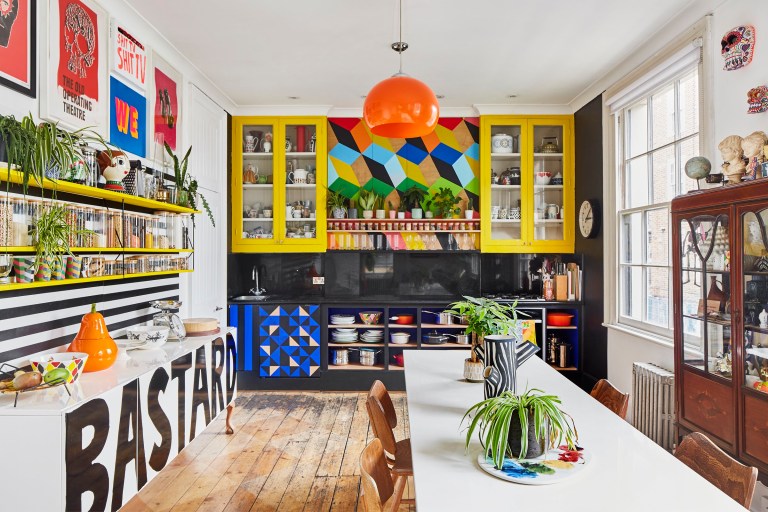 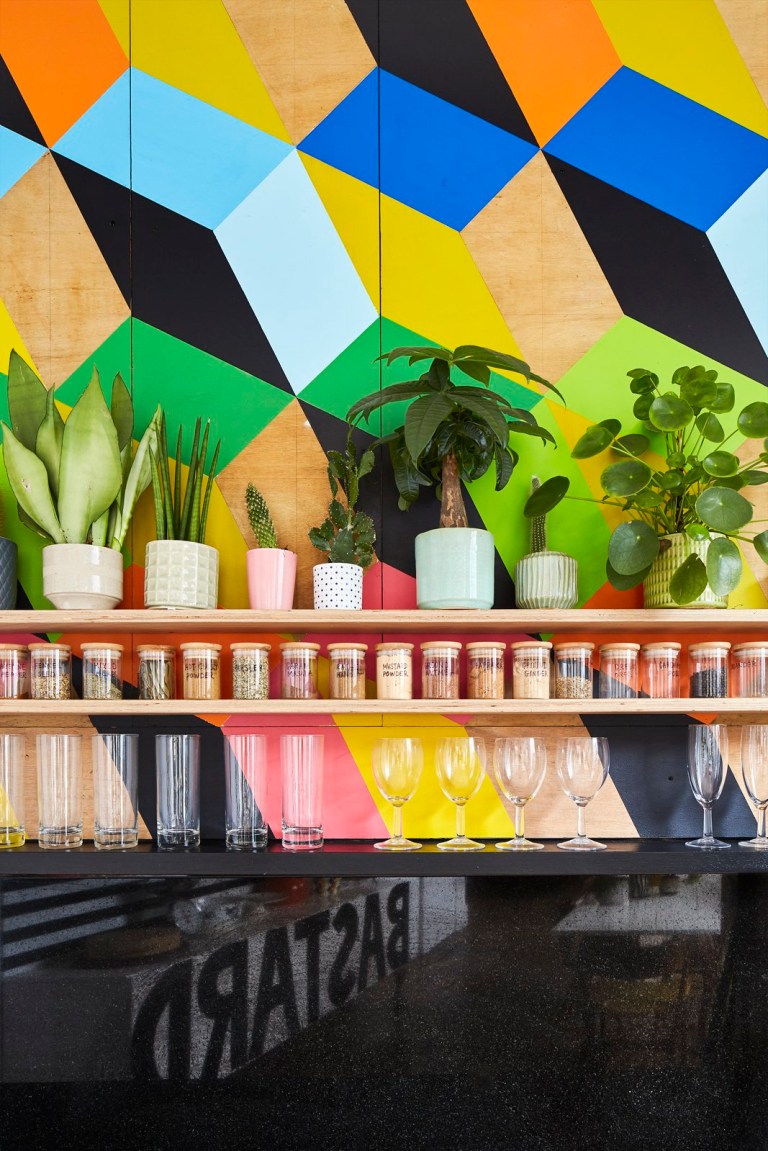 Those are some organised herbs and spices (Picture: Zoopla) 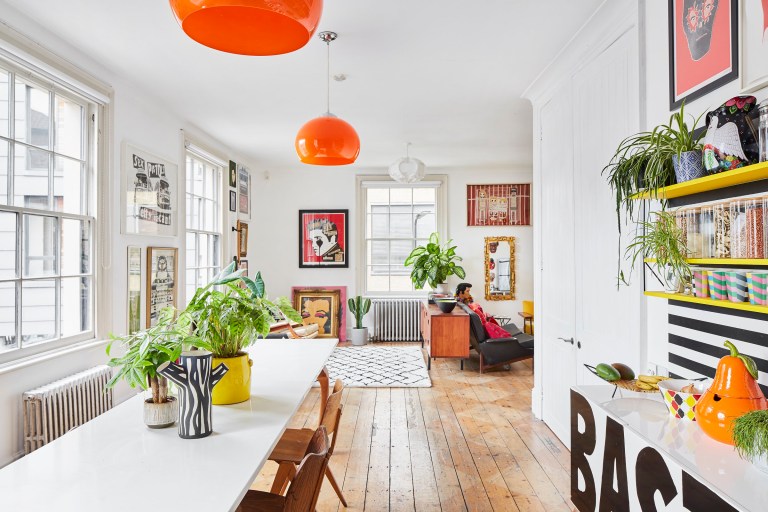 It’s open-plan with the dining and living areas (Picture: Zoopla) 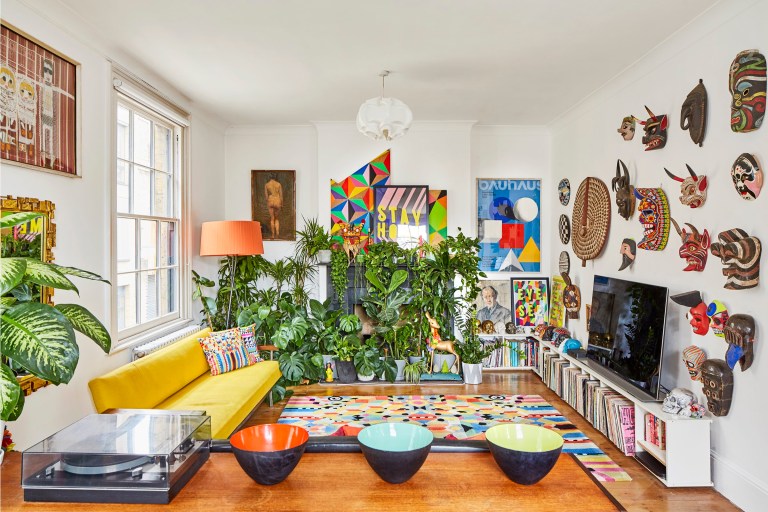 Morag says the yellow sofa is one of her favourite buys (Picture: Zoopla) 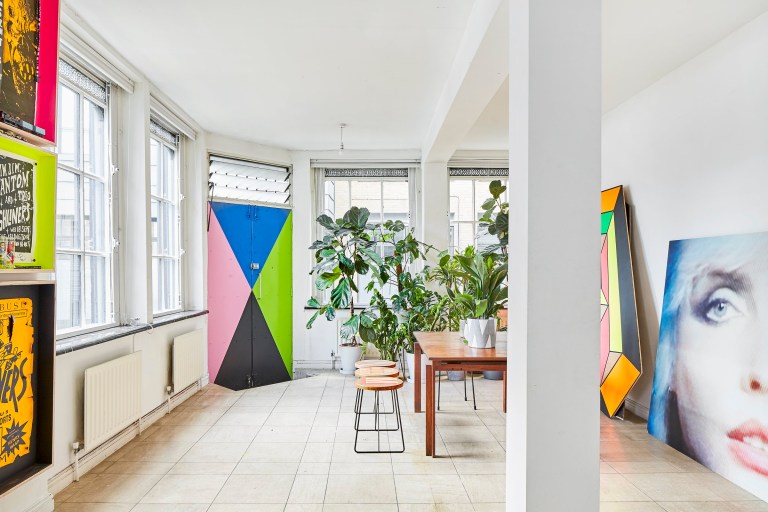 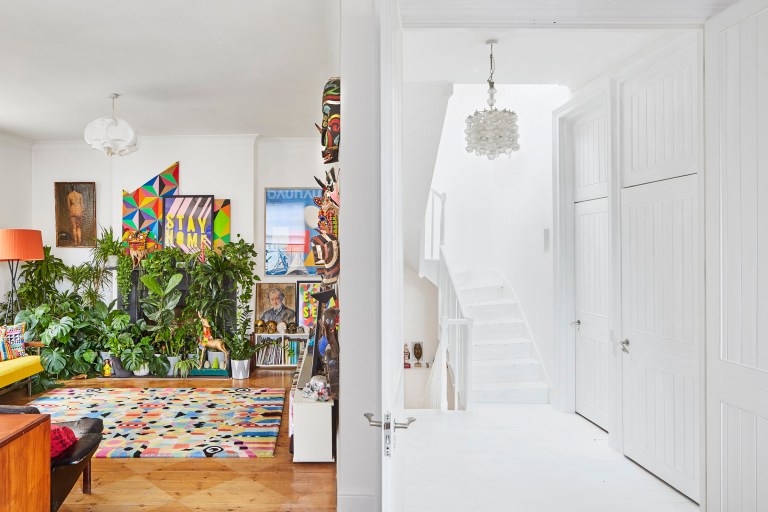 We’d copy all the plants, too (Picture: Zoopla)

Head up to the second floor and there’s more excitement.

The main bedroom has a free-standing bath opposite the bed, marine plywood covered in grey felt on the walls and ceilings, and wide-board timber flooring.

There’s also a large summer room with a built-in seating area. Yes, this is pink, and yes, we love it. 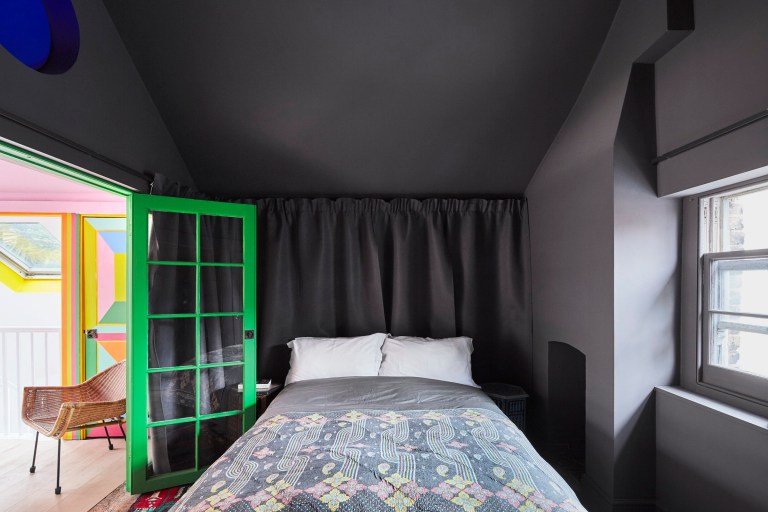 The main bedroom is decked out in grey felt (Picture: Zoopla) 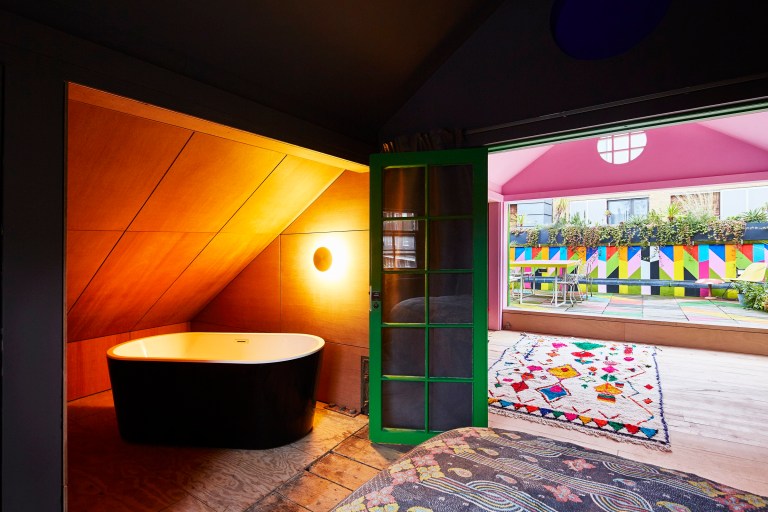 There’s a free-standing tub opposite the bed (Picture: Zoopla)

Head through here and you’ll get to the decked terrace.

Location-wise, the place is great, too.

The house sits on the corner of Drysdale Street and Drysdale Steet, with runs east to west between Kingsland Road and Hoxton Street. 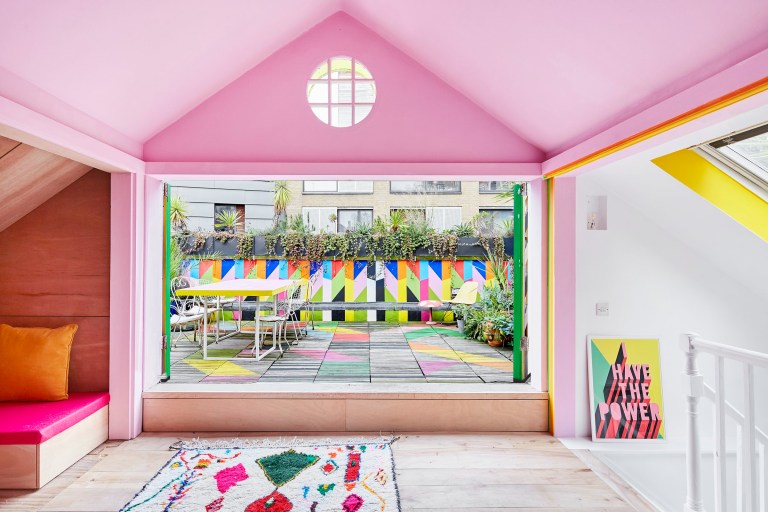 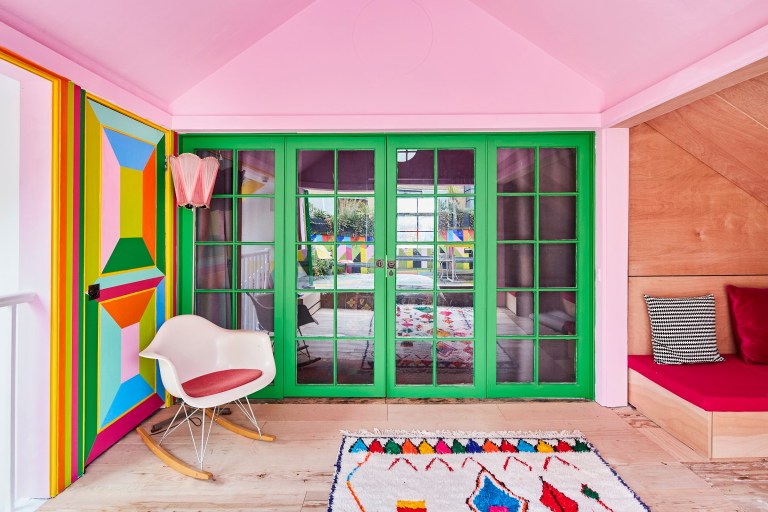 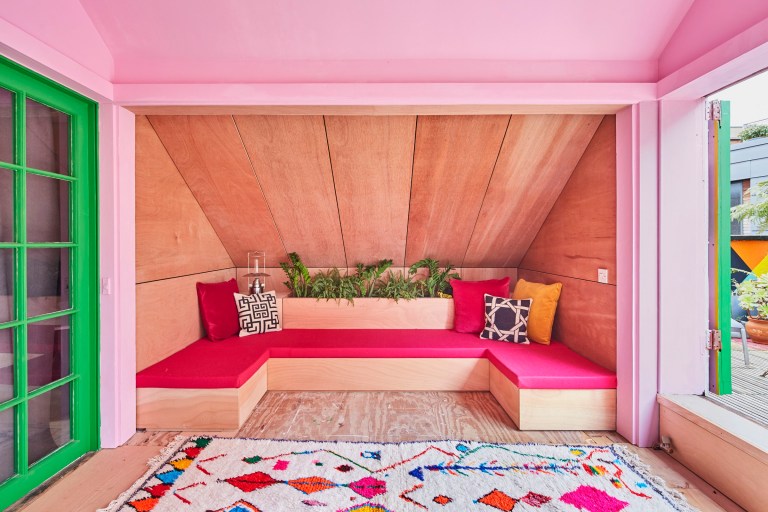 Can you picture yourself relaxing here? (Picture: Zoopla)

That means it’s a minute’s walk from Hoxton Square and super close to all the shops and restaurants at Spitalfields, too.

If you happen to have a few million spare and fancy making an offer, you can find out more through Zoopla.

‘Each bit of the house has a different language, which makes every corner feel interesting,’ said Morag. 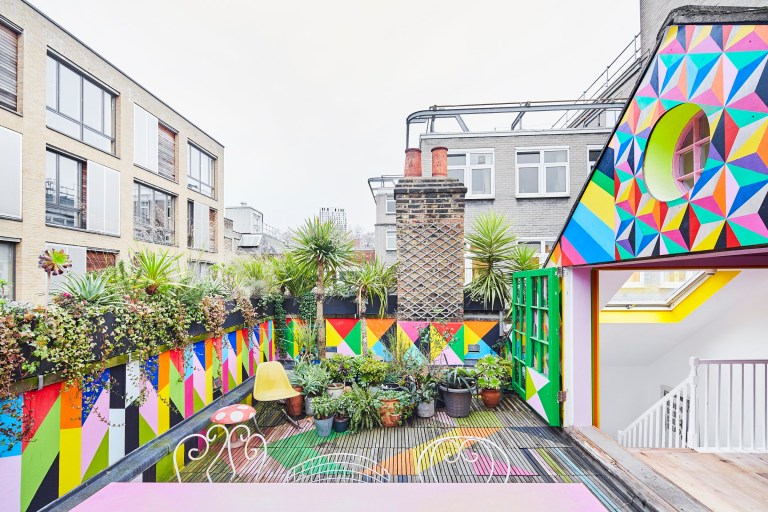 ‘Overall it feels comforting, but each space has quite a unique atmosphere. It could work for one person living alone or for a family – nothing about it feels unmanageable.

‘I never thought I’d sell this place, but if we don’t do it now we’ll end up staying here forever.

‘We want to pass this on to someone who will make it their own and love it as much as we have.’