‘The Winter House’ is a work of art (Picture: Metro.co.uk/Daniel Hopkinson)

When Mark Waters decided to commission Winter House, a brand new modernist home in Rolleston-on-Dove, in a Staffordshire conservation area, his must-have list was remarkably short.

‘I wanted it to not only showcase my art collection in the best possible way,’ says Mark, a keen collector of at least 60 pop art and contemporary canvases, and an admirer of Andy Warhol, Harland Miller and Damien Hirst, ‘but also to preserve it.

‘And other than wanting a really good gym, home office and games room, I gave the architect free rein.

‘The result has been an incredibly serene home, in a parkland-like setting. But there were also all sorts of surprises thrown in along the way.’

Mark, an investor in businesses, was a dream client for Scott Donald, of the eponymous Cheshire-based architecture firm.

With nobody breathing down his neck issuing directives, Scott says Winter House, which was completed in 2020, offered a truly rare opportunity: a client who didn’t try to impose his own rigid brief, style or size.

‘Instead, he presented an impressive one-acre site encased by protected trees,’ Scott says. ‘Aside from an existing house on the plot, it was an empty green amphitheatre, a true blank canvas.’ 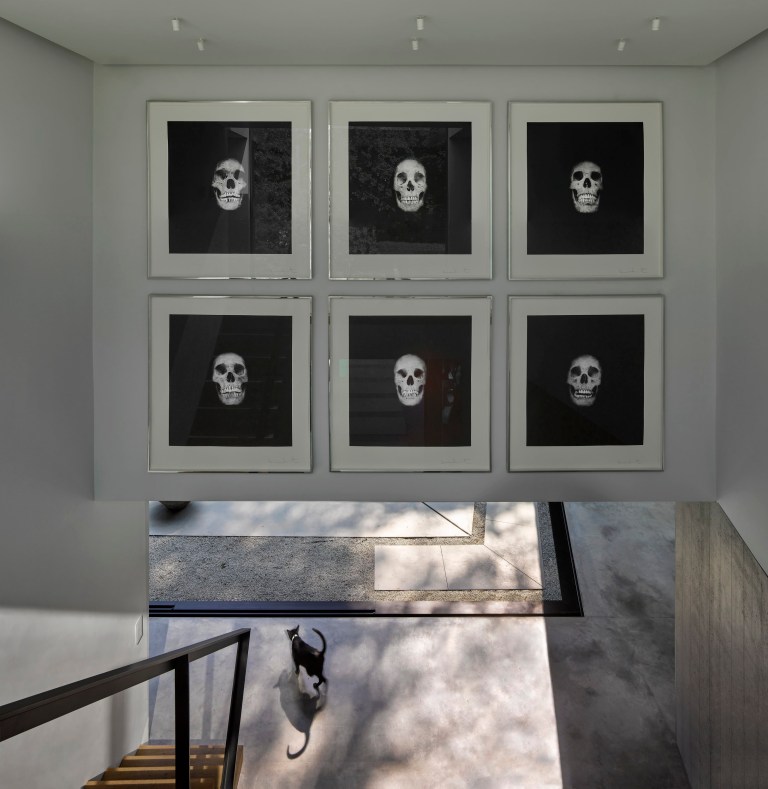 The house was designed to show off Mark’s impressive art collection to its full potential (Picture: Daniel Hopkinson) 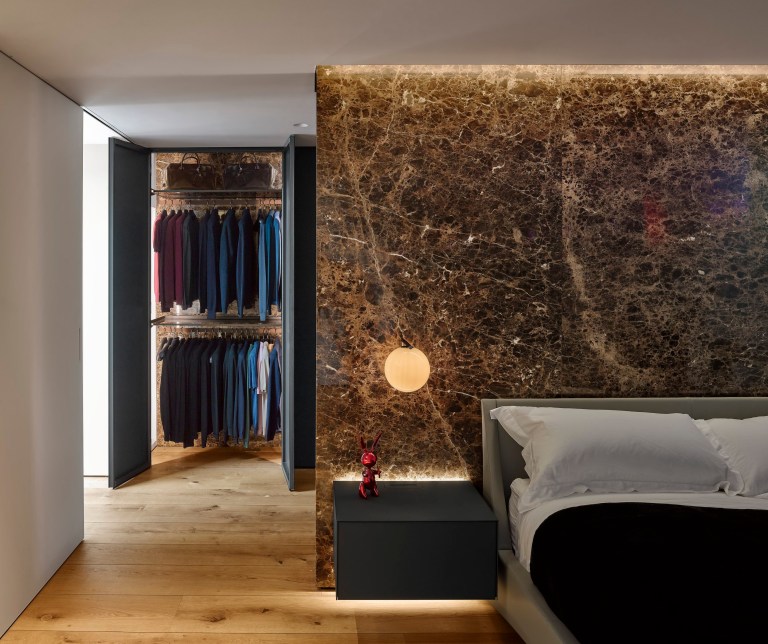 It was while Mark was living in a nearby village, in a converted barn development, that he became aware of a small gated community in the grounds of what was once Rolleston Hall, about three miles from Burton upon Trent.

The enclave has an eclectic mix of period and self-built newer homes, but it was an Arts and Crafts cottage, extended by various owners over the years, that caught Mark’s eye.

‘The fact that it was in the heart of the village, set in an acre of secluded grounds with 100 beautiful trees, was incredible, Mark says.

He snapped up the property a few years ago for about £800,000, and soon after commissioned Scott to create a dramatic contemporary home. ‘I knew as soon as I saw his work that he was the architect for me,’ says Mark, impressed by Scott’s portfolio of one-off new-builds and glass-box extensions.

To kick off the whole process, a tree expert was called in to establish where the tree roots were, so a feasible footprint for a house could be created.

To get past the local planners, the house would also need to be tucked away behind a swathe of green, dark in colour, and largely unseen from the front – which led to a seven-month planning process. 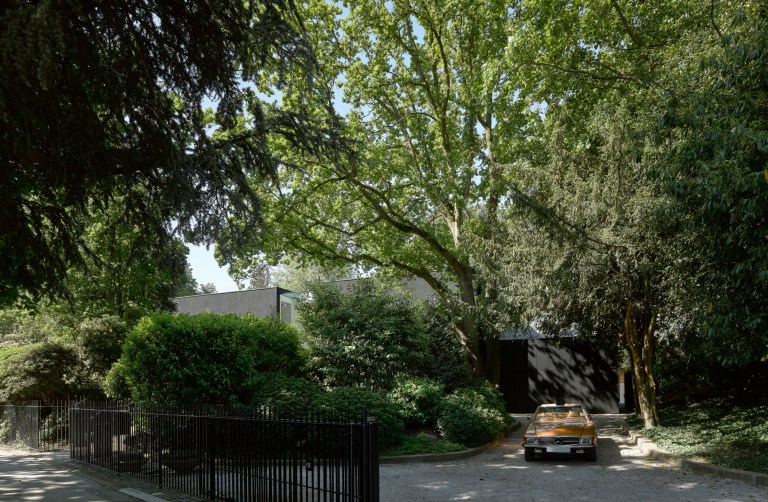 The house is hidden among lush greenery (Picture: Daniel Hopkinson) 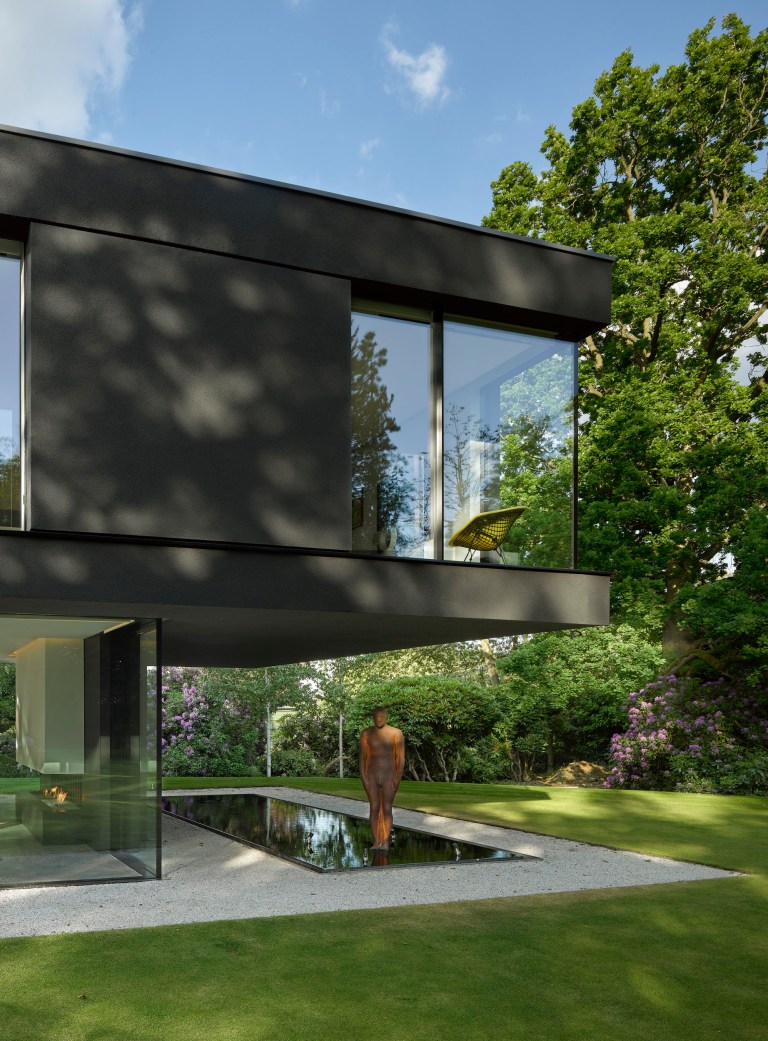 The exterior is made of black power-coated metal, slate and frameless glass (Picture: Daniel Hopkinson)

However, despite some contention, before the home was even completed it had received a Civic Trust award from East Staffordshire council.

Mark’s £3million budget for the ingeniously engineered Winter House – which took in about £600,000 just on landscaping – meant no expense was spared to ensure it melds seamlessly into its leafy backdrop.

‘We wanted the connectivity and views to the garden to be unencumbered, for there to be effectively nothing between inside and out,’ Scott says.

‘To achieve this, we had to make sure there was no visible structure along the 25m-glazed line. All of the structure is pulled deep into the plan. It’s out of sight.’

The exterior’s dark materials are exchanged for lighter ones inside, giving the interiors a more gallery-like feel. Inside, on the ground floor, there are flowing living spaces, all of which open onto the landscaped grounds, plus a fitness suite, and on the first floor four bedrooms.

A mezzanine games room provides more space for entertaining, and gives an overview of the living room below. 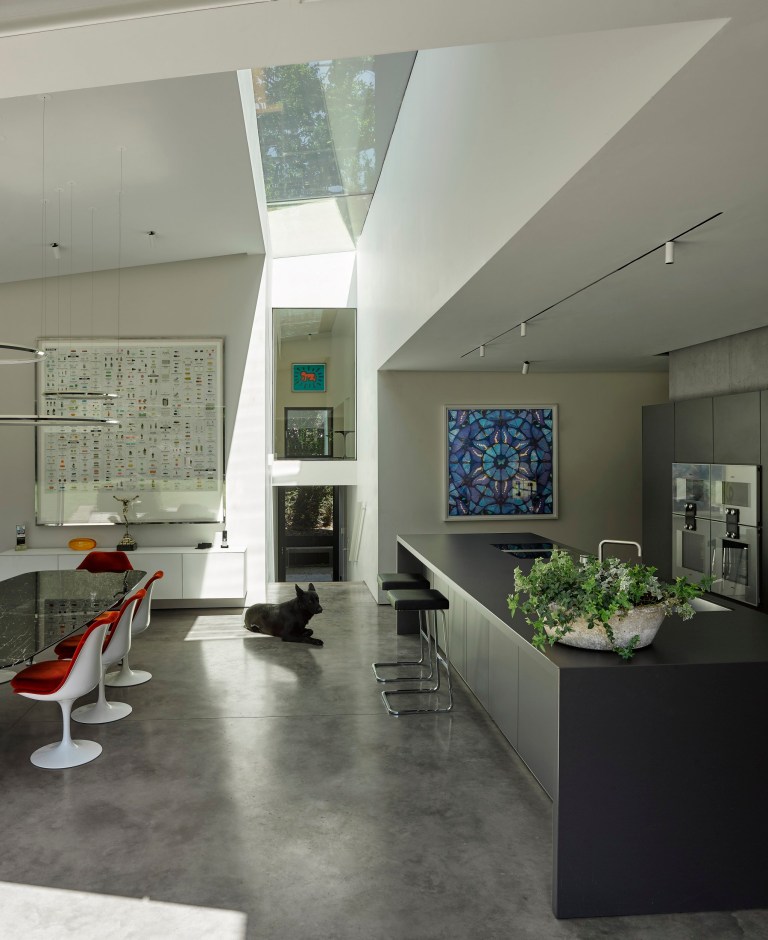 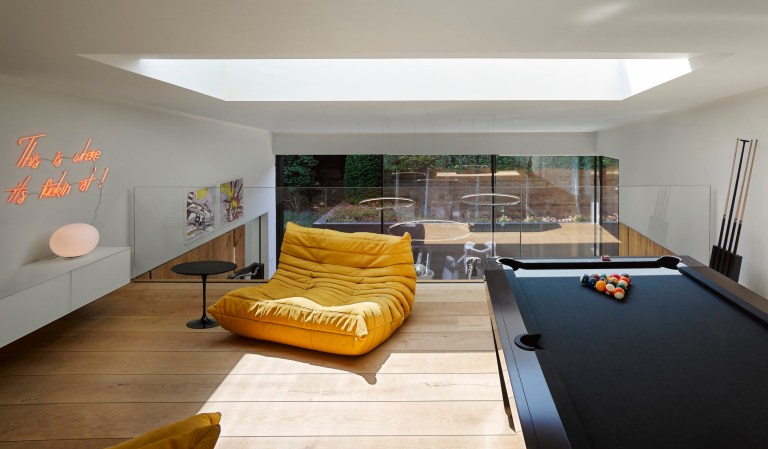 Amazingly, the two-year build was such a stress-free experience it could never have made it on to an episode of Grand Designs, laughs Mark.

Tech played a huge part in this. On the days he couldn’t get to the site himself, he watched the building process via CCTV.

He also commissioned virtualcgi.co.uk to produce CGIs of the interiors to help him choose the shade of the Bulthaup kitchen, concrete floors, wood tints and even cushion colours. They aren’t cheap, starting at about £600 per CGI, ‘but cheaper than making the wrong decision.’

It was Scott’s incredible attention to detail that was the most invaluable part of the process, says Mark, who also handed over free reign regarding the interiors. ‘He brought in concealed lighting and made last-minute changes to plug sockets, to make sure everything was perfect.’

For Mark, everything comes back to the art. He provided his architect with a full inventory of his collection, including dimensions, so the best position could be determined for each piece from the outset.

The shape and position of walls were designed specifically around them, with conservation a strong theme.

‘Some of these paintings have hung in Californian homes for 50 or 60 years, and have been at risk of damage by strong sunlight and humidity,’ Mark says. Careful lighting and a ventilation system were installed to counteract this.

Mark feels his greatest achievement at Winter House is, however, the sense of peace, which visitors always comment on.

‘The invisible threshold between inside and outside, surrounded by this incredible private landscape means the home has far exceeded my expectations,’ he says. ‘It’s the most wonderful place to live.’

US prepared to recognize Taliban as ‘legitimate government’