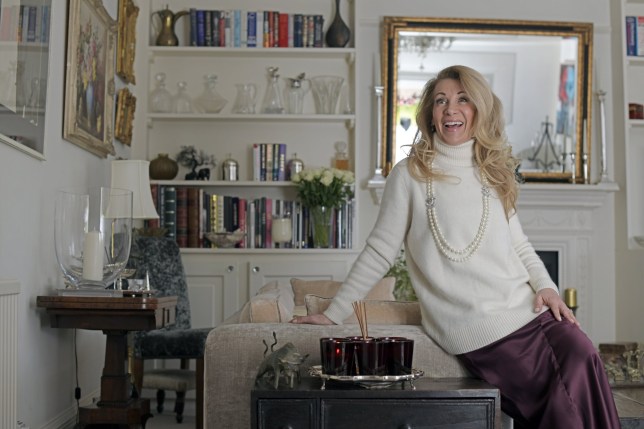 Aliza is following in her mother’s footsteps as the head of lingerie brand Janet Reger (Picture: Daniel Lynch)

With a laugh, Aliza Reger, who heads the trailblazing Janet Reger lingerie brand from her three-bedroom mid-Victorian apartment in Swiss Cottage, north-west London, reveals she’s also ‘brilliant at ironing… and I make a lot of jam.’

The globally renowned company was started by her mother, Janet, in the 1960s and celebrity clients have included Princess Diana, Joan Collins, Kylie Minogue, Kate Moss and even David Bowie – for a pair of silk pyjamas, in case you’re wondering.

It was seen as the original disruptive lingerie brand, bringing daring designs to a dull, post-war market.

Before lockdown, Aliza’s days would be spent rushing across London for back-to-back design meetings, coffee in the capital’s five-star hotels and glamorous brunches in West End cafés.

As with most people, work is now conducted exclusively from home via WhatsApp and Zoom, where she is orchestrating new launches at Next and Ann Summers, as well as business as far afield as Hong Kong.

‘I don’t expect people think I’m as domesticated as I am,’ says Aliza. ‘I do a lot of baking these days, and then there’s the ironing. 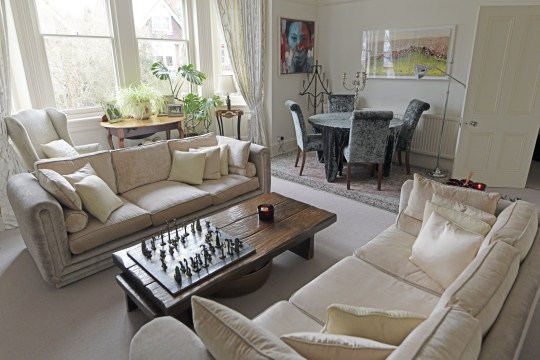 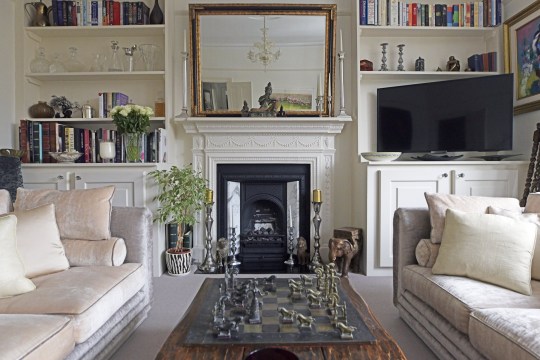 Aliza’s home is filled with exotic souvenirs from her family’s travels around the world (Picture: Daniel Lynch)

The ironer sometimes wouldn’t turn up at trade shows in the past and I’d be the ironer for the day – I’ve had plenty of practice.’ She bought the flat 20 years ago with her husband Andrew, a property developer.

It’s spacious, with traditional cornices and big sash windows that let the light flood in. It was the first place the couple settled, having had a succession of short-term buys beforehand to flip, one of which was lived in for less than two weeks.

While smart and refined, this 1870s flat, built as part of a boom in the area following the opening of Swiss Cottage Tube station in 1868, is also home to a cache of items from Aliza’s and her late mother’s lives. 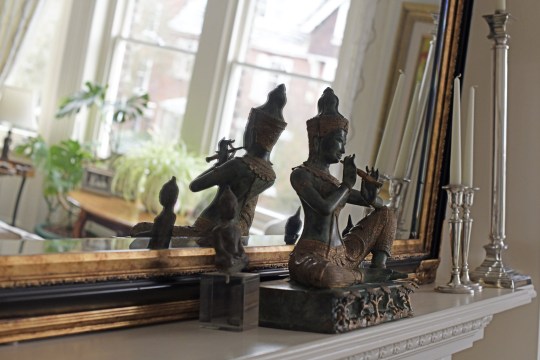 A Buddha brought back from Thailand sits in pride of place on the mantelpiece (Picture: Daniel Lynch) 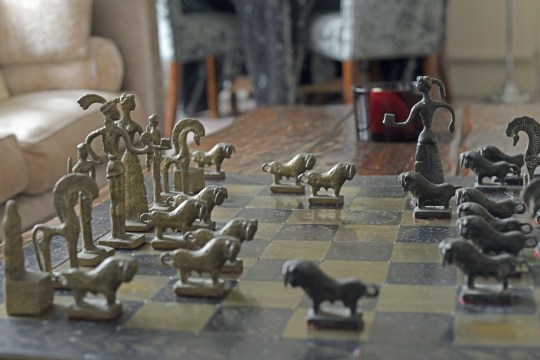 One piece is moved on the chess board every day (Picture: Daniel Lynch)

‘The property has a flair and a design element but it is homely,’ says Aliza. ‘I have a lot of things that have been acquired over the years, special things handed down through the family.’

Even the small things, those little details of day-to-day life, should be worthy of attention. Aliza holds up the delicate floral-pattern mug she is drinking tea from.

‘The mugs are pretty,’ she says, ‘Villeroy & Boch with a rose. It has to be aesthetically pleasing and fulfil its function. My mother always quoted Coco Chanel: “Never a button without a buttonhole.”’

Aliza’s lockdown days are very structured. She has an online exercise class first thing in the morning before meetings with partners in Hong Kong. Then it’s morning meditation followed by a late breakfast.

She works through lunch and has a proper meal in the evening, from Middle Eastern food to roasts, made on the range cooker. The kitchen is scattered with pieces collected over the years, from big wooden bowls bought from Greece, to watercolours by mid-century French artist Raya Sorkine.

Above the door are caricatures of Aliza, Andrew and her mother, done while they were living in Mauritius. The hallway, which runs like a spine through the whole flat, is a room in itself.

This is where Aliza sits on a miniature sofa from Harvey Nichols to answer emails, surrounded by JAK cartoons that were a gift from the famous Evening Standard cartoonist to her mother, and featured Reger lingerie. A sword on the wall is a souvenir from a trip to Bangkok. 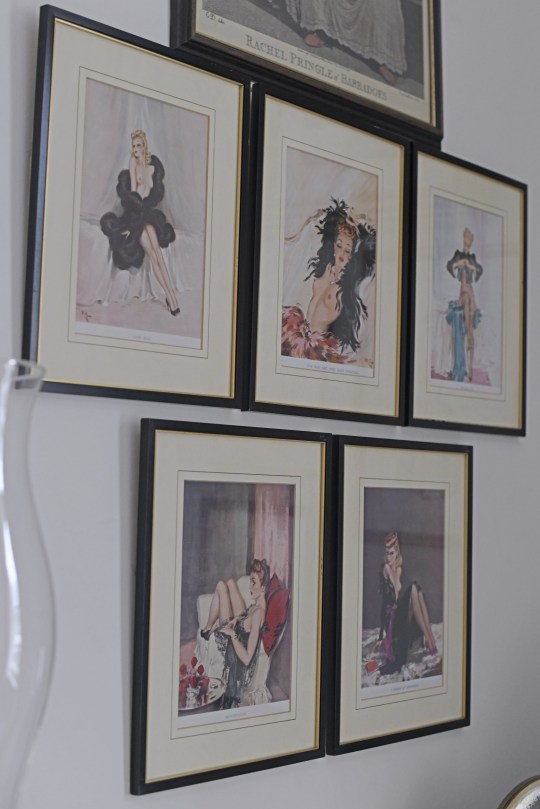 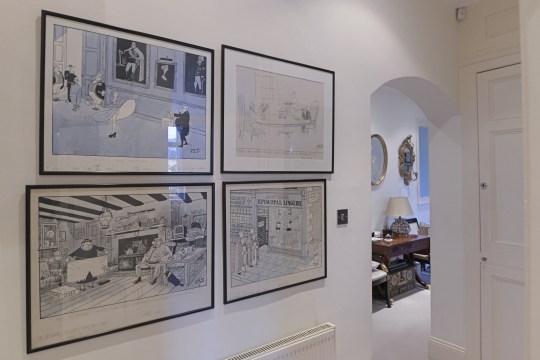 ‘[All the pieces] are part of my DNA,’ Aliza says. ‘It is tempting to throw things out. I call them my dead people’s things, but it keeps some of them living with me.’

The cosy living room is filled with family photographs, heirlooms and artefacts. Two plush, custom-made sofas from the 1980s face each other and in the middle is a chessboard, where one piece is moved every day – a Reger household tradition.

The wrought-iron chess set was hand-made for the film The Magus (1968), starring Anthony Quinn, Candice Bergen and Michael Caine, and was passed down by Aliza’s father. A Buddha that was brought back from Thailand in the 1970s by her parents calmly watches on as Aliza points out a treasured Lalique vase.

‘This is really special to me,’ she says. ‘It was in the window of a china shop in Beauchamp Place, my mother had our shop there, and I would see that vase in the window every day. Then one day shortly before Christmas, I was so upset it was gone. But later I found out my mother had bought it for me as my Christmas present, I was wildly excited.’

Candelabras from a church; her grandmother’s favourite wingback chair and card table – nothing is without significance. 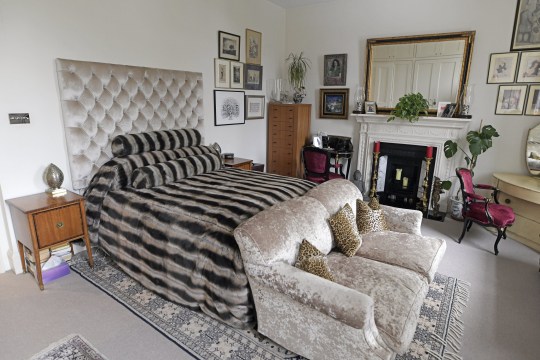 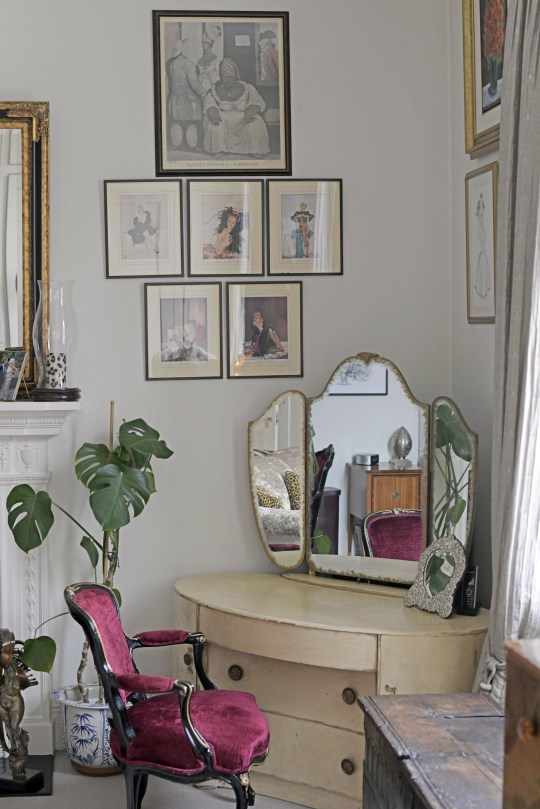 ‘I would call the look eclectic,’ Aliza adds. The walls are mostly painted in Farrow & Ball’s White Tie, a pale and creamy shade of white.

‘I have a lot of decorative things,’ explains Aliza, ‘so it’s a neutral setting against the various pieces of art and ornate pieces. Plain walls make a better backdrop. I get sick of looking at busy wallpaper after a week or so.’

However, the shower room is a surprise. With art deco-style Brazilian green marble sourced by Aliza from a wholesaler in Wembley, painted gold-framed mirrors from the original Janet Reger shop and luxurious fittings, it has a 1930s Hollywood quality.

‘I’m a bit of a magpie,’ says Aliza. ‘We took a bath out and made it a shower room. It’s better to have a fabulous shower room than a so-so bathroom.’ 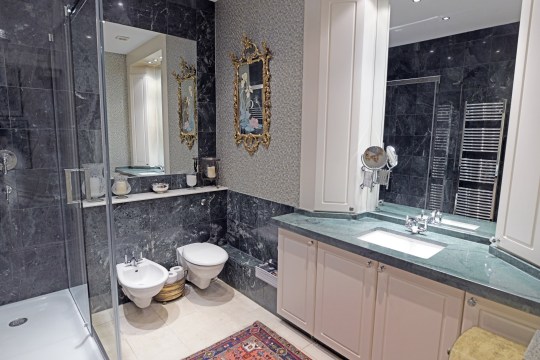 The bath was removed to make space in the green marble showeroom (Picture: Daniel Lynch)

In the master bedroom is a fully functioning Elizabethan clothes chest bought in the 1970s in an antiques shop in Derbyshire by Aliza’s father.

The chest of drawers was recovered by her mother in Egyptian hieroglyphs and was used in one of the Janet Reger shops. The office, where a lot of the business is now run, features a Perspex block with the original Janet Reger logo and a gleaming 2013 UK Lingerie Award for Favourite British Designer Of The Year.

Aliza has discovered a new love for her home during lockdown, even though she is forced to spend more time there than ever before. ‘Covid-19 has taught me many things and one is to be even more grateful for what I have,’ she says.

‘I am grateful I have space to work in, space to move around – my home has become a cocoon. I’m also a great believer in buying what you love. I believe you should buy beautiful, cherish it, and let it bring you joy.’