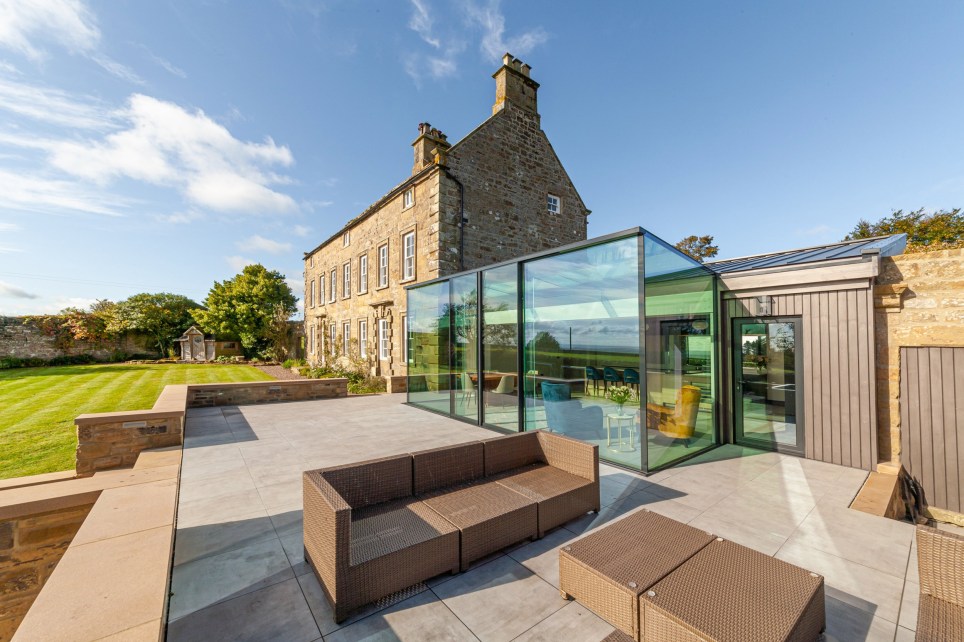 Just as the UK was plunged into lockdown last March, Mike Parker hit a critical stage in his house renovation.

After years of planning a radical extension to his historic Grade II-listed Northumberland home, he had the Bristol-based building team finally on its way, with the acres of glazing required.

But they would have nowhere to stay with all the hotels set to close.

There was no way Mike, a leading light on the North East tech scene, was prepared to be thwarted, so he simply invited the builders to move in.

‘I told the four lads they should just come and stay at the house,’ he says. ‘I just didn’t want to put it off any longer, and luckily we had the space for them to be safely self-contained. So they moved in for a week and got the job done.’

The frameless glass kitchen extension, which received its finishing touches last September, was the final piece in Mike’s careful coaxing of his heritage home, South Hall, into a 21st-century mini-estate for himself, his wife, Hannah, and their three children, Gabby, 14, Reuben, eight, and Nancy, two. 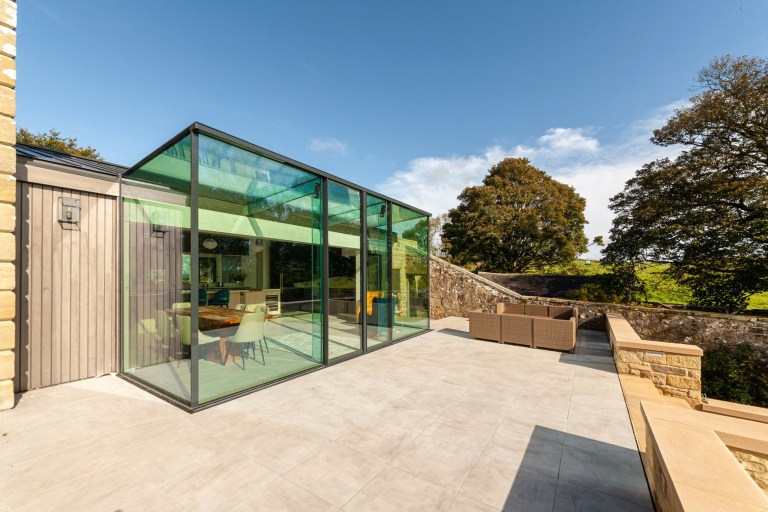 The glass kitchen extension was the final piece of the puzzle (Picture: Francois Verbeek) 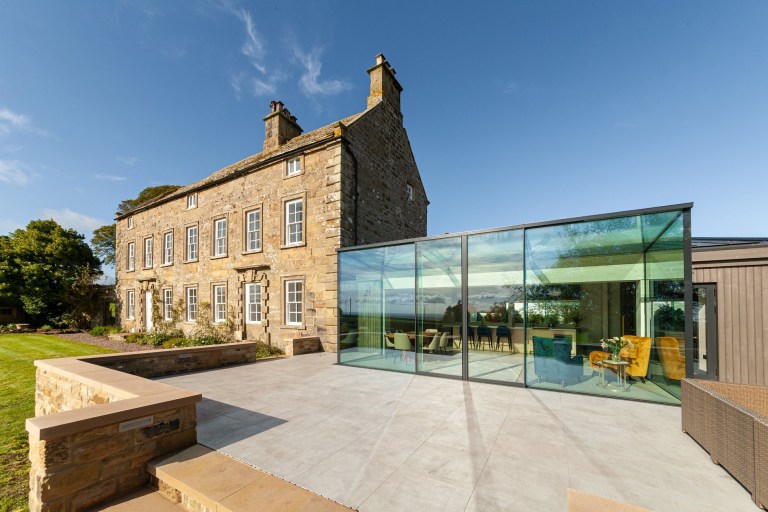 The focus for the build was the amazing countryside views (Picture: Francois Verbeek)

‘The original kitchen was at the back of the house, so our vision was to create a kitchen and family space that could really embrace the incredible views to Newcastle and across the Northumberland fells,’ Mike says.

‘I knew I wanted to do this the second I saw the house, in 2016, so before we bought it we made sure our architect thought it would be feasible.’

It would mean working closely with Historic England and local planners on the early 18th-century house in the hamlet of Ingoe. It was rumoured to have been built by the 1st Duke of Northumberland’s master builder as his own home, and certainly has a positive embarrassment of period architectural features. 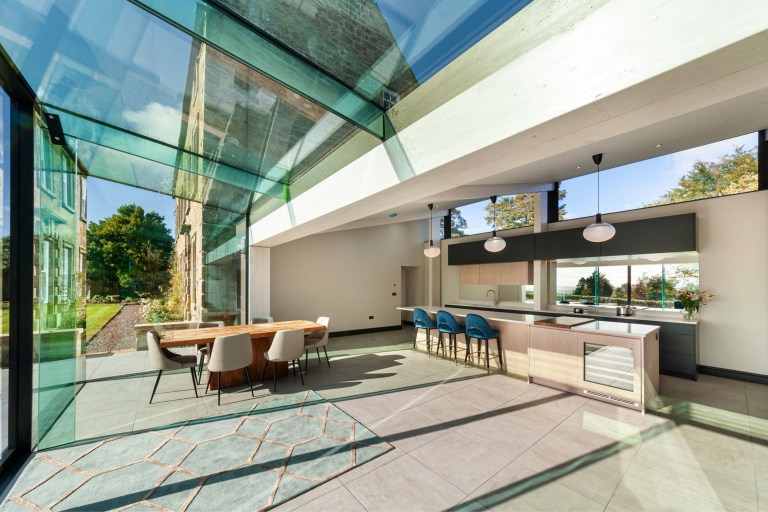 It’s a gorgeous space for the family (Picture: Francois Verbeek) 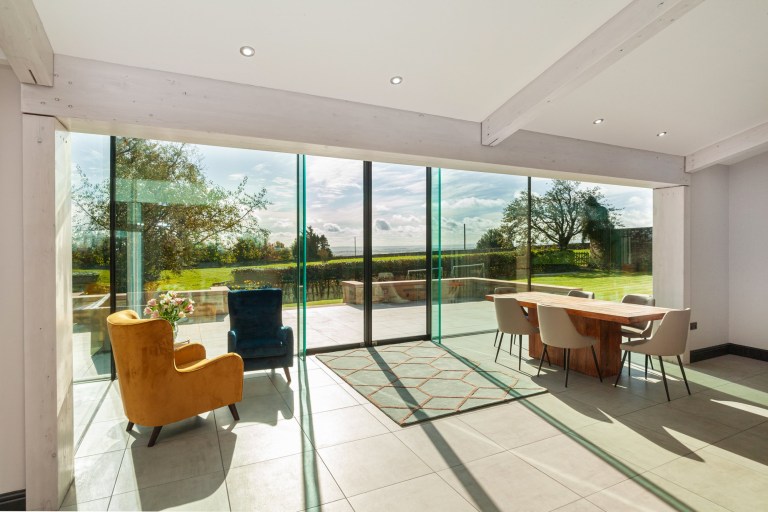 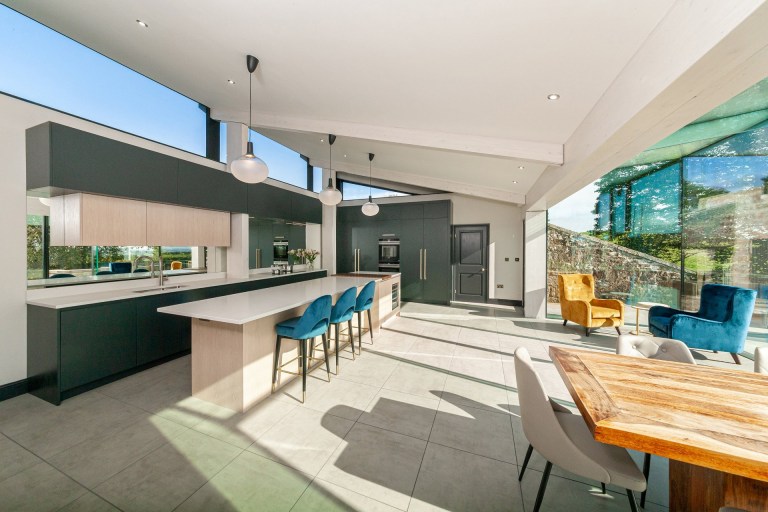 The classic, Georgian rural home has high ceilings, a Venetian window with Tuscan columns over the original, ornately carved staircase, and an inlaid marquetry sunburst at the half-landing, plus grand fireplaces and all the trappings of a grand country home: six acres of land, stabling, kennels, former servants’ quarters and a kitchen garden.

Specialist architecture firm Doonan, based in nearby Hexham, were called in, as they had experience of getting planning permission for important homes in the area.

‘They talked us through the options, although, of course, we were not allowed to alter the original fabric of the house, or run an extension along the house’s original profile,’ says Mike, who grew up in the nearby village of Corbridge. ‘It had to very clearly be a modern addition, not a pastiche of the past, so a frameless box was the ideal answer.’ 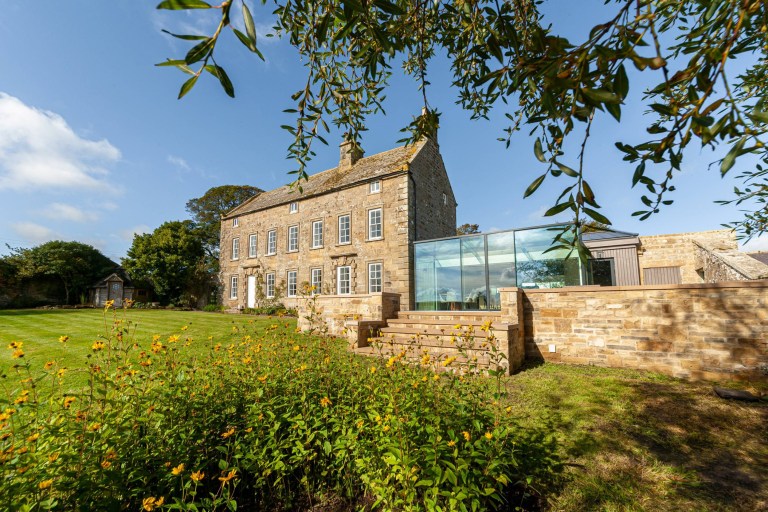 The glass box sits in modern contrast to the rest of the 18th-Century property (Picture: Francois Verbeek)

Today, the light-flooded, green-hued glass extension, which opens on to a huge terrace and comes with a double-height atrium, sits in striking contrast to its textured, weathered historic counterpart.

With the same attention given to designer detail throughout the rest of the three-storey house, just a 30-minute drive from Newcastle, it’s no surprise that Mike went over budget. 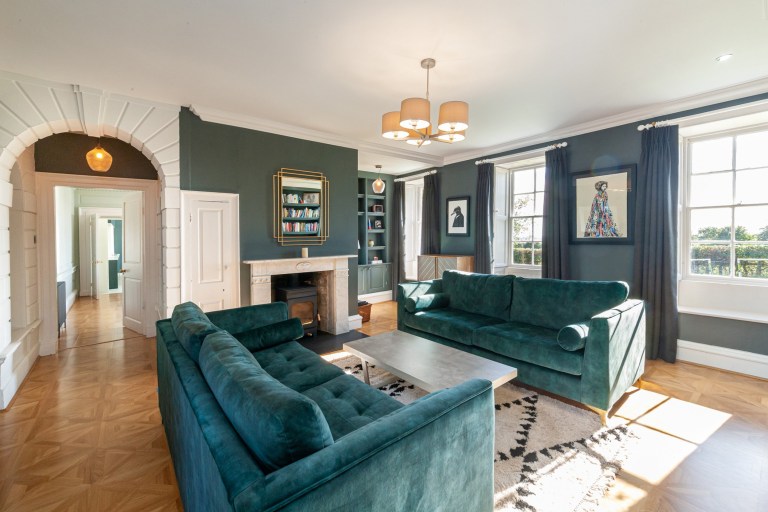 The rest of the home continues that classic-meets-modern feel (Picture: Francois Verbeek) 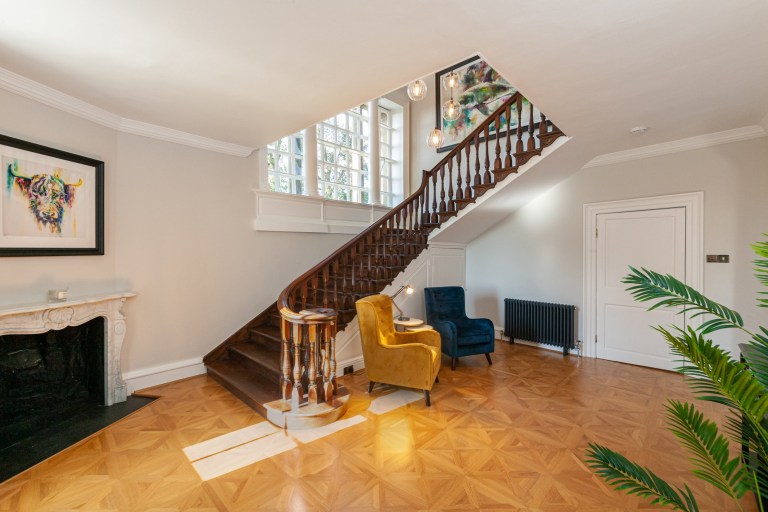 Many of the original period features have been maintained (Picture: Francois Verbeek)

‘We bought the property for about £1.2m, and have spent about £600,000 altogether,’ he says. ‘The glass for the extension alone cost £77,000 and the white-washed wooden ceiling beams, which came from the Netherlands, about £14,000. We kept track on spending, but it was soon blown out of the water.’

Being prepared to live on a building site while he project-managed the renovation of the main six-bedroom house — which was the first part of the restoration — was one way that Mike saved money, but he says it’s not a choice he would make again.

‘We lived in the old kitchen for a lot of the time, and moved a sofa and TV in there,’ he says. ‘It wasn’t great. But at least there was nothing structurally wrong with the house when we bought it. It just needed a complete overhaul. The aim was to create a contemporary country home that still gave a nod and a wink to its historic past.’ 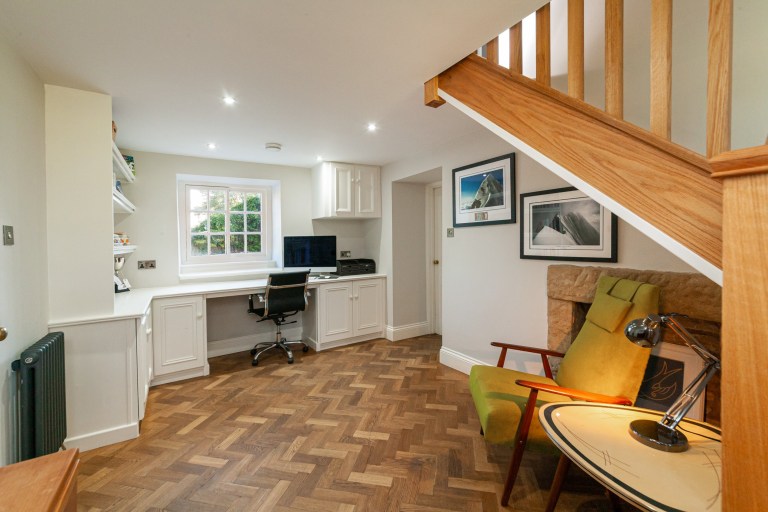 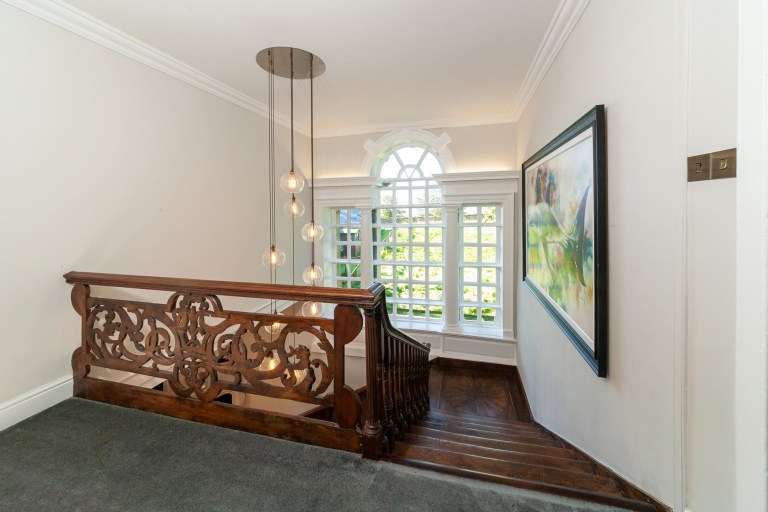 It’s all rather grand, isn’t it? (Picture: Francois Verbeek)

Living spaces were reconfigured, creating five reception rooms including a traditional piano room, library and pantry, as well as a high-tech cinema room.

Carpets were ripped up, and elaborate wooden parquet floors laid, worthy of an Austen-esque ballroom, and the last owners’ painted and papered walls were then stripped back to be given the classic period home renovator’s palette of choice: Farrow & Ball.

Ceilings and skirting boards have been painted throughout in All White or Strong White, with the hallway in fossil-grey Ammonite, the piano room in delicate grey Dimpse and the living room, with its vast green emerald-green velvet sofas part of a collection by Louise Redknapp, in the dramatic dark lead-grey Down Pipe. 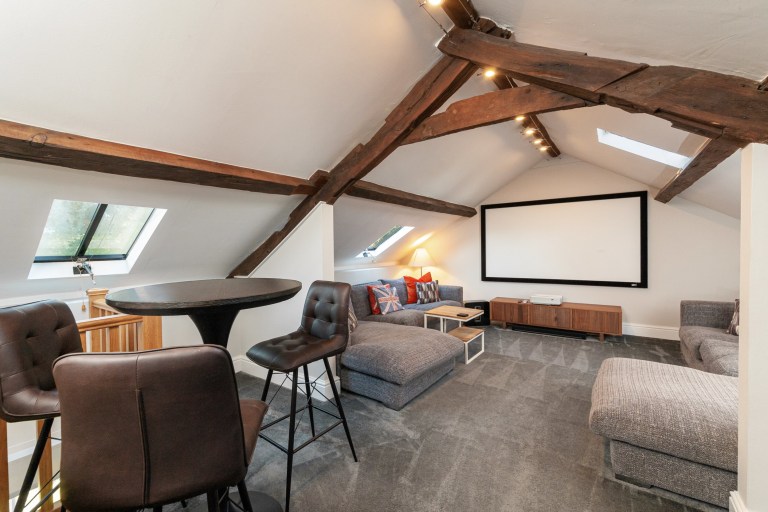 Glossy, boxy bathrooms were eschewed for a look more in keeping with the house, with geometric tiling on the floors and pretty wildflower-sprigged wallpapers, such as Boråstapeter Flora wallpaper.

Contemporary lighting was used elsewhere to modernise the general look, with the drop cluster chandelier by FritzFryer in the hallway one of Mike’s favourites.

But despite having only lived in the completed home for six months, Mike is now dreaming of swapping South Hall for the South of France, and has put the home on the market for £1.75m — a price tag that could easily be pinned on a two-bed flat in central London with no garden. 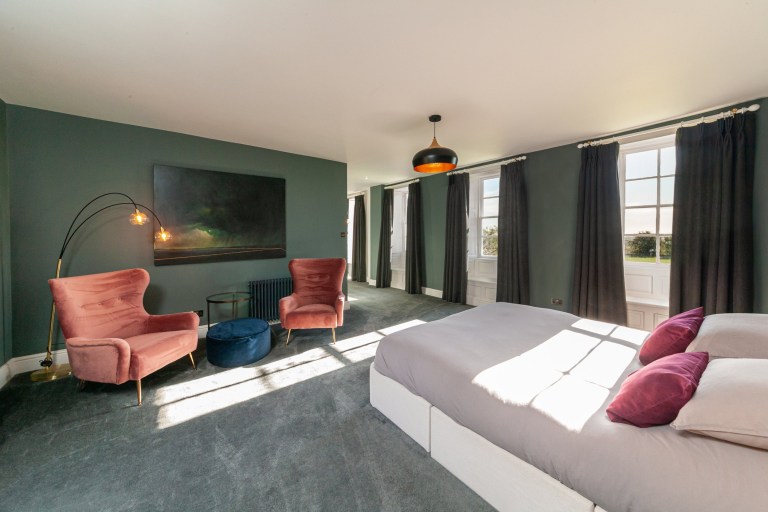 Contemporary lighting has been made to (Picture: Francois Verbeek) 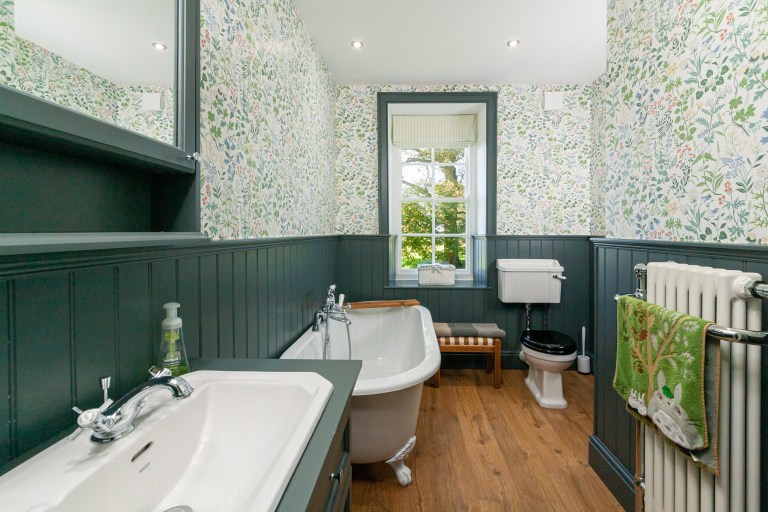 The property is now on sale for £1.75million (Picture: Francois Verbeek)

Here, there is still plenty of scope for a new owner to create their own paradisiacal mini estate.

In the six acres, there is room for the green-fingered to get creative, with room for formally designed gardens and a wild swimming pond (there’s a freshwater spring on the property). Mike suggests it would even be an idyllic small farm.

But whatever incarnation South Hall takes next for the next generation, the Northumberland night time starscapes won’t change.

‘There is no light from neighbouring houses, so on a clear night, it’s completely dazzling,’ says Mike. ‘That’s something I will miss.’

What I Rent: Farah, $1,382 a month for a studio apartment in Paris, France

How this couple transformed their London penthouse into a family home